Tupac Shakur gave a voice to young afro americans in the ghetto with his poetry and charisma. Notorious B.I.G was phenomenal on the mic, a cut above the rest. Nipsey Hussle has shown the entire world how a youth from a ghetto, being part of a minority, can become a true leader by means of his spirit of enterprise, activism and social commitment.

His life and deeds not only inspired and awakened the Hip Hop and Afro American community, but also must be of example to all of us. 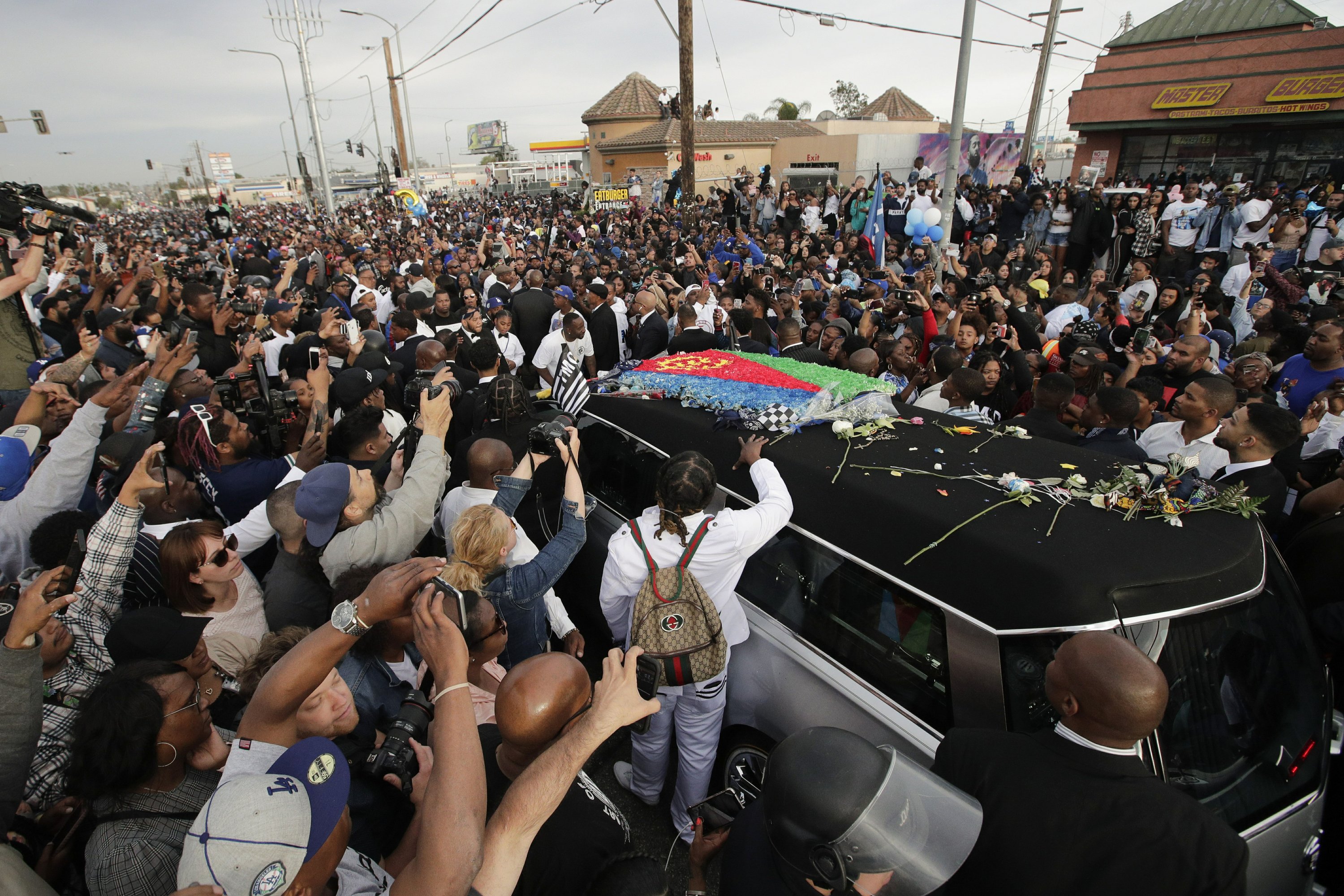 The foundation: a parking lot between Crenshaw Blvd. and Slauson Ave

Nipsey Hussle, born Ermias Joseph Asghedom, was born in Crenshaw, a South Los Angeles neighbourhood. The year was 1985. His father was Eritrean and his mother was African – American. When he was 15 he became part of the Rollin 60 Neighbourhood Crips, the gang that was in control of his hood. The parking lot between Crenshaw and Slauson was the spot where all the gang members would meet but also where Nipsey first began dreaming of becoming  a successful rapper. When he turned 20 he decided to leave the gang and dedicate himself exclusively to a career in music. In desperate need of funds to start recording his songs, he immediately demonstrated his entrepreneurship by selling mixtapes out the trunk of his car on that same intersection. He then set up a recording studio with the help of his brother Samiel, known as “Blacc Sam”, who was a respected hustler in the neighbourhood.

Nipsey Hussle, born Ermias Joseph Asghedom, was born in Crenshaw, a South Los Angeles neighbourhood. The year was 1985. His father was Eritrean and his mother was African – American. When he was 15 he became part of the Rollin 60 Neighbourhood Crips, the gang that was in control of his hood. The parking lot between Crenshaw and Slauson was the spot where all the gang members would meet but also where Nipsey first began dreaming of becoming  a successful rapper. When he turned 20 he decided to leave the gang activities and dedicate himself exclusively to a career in music. In desperate need of funds to start recording his songs, he immediately demonstrated his entrepreneurship by selling mixtapes out the trunk of his car on that same intersection. He then set up a recording studio with the help of his brother Samiel, known as “Blacc Sam”, who was a respected hustler in the neighbourhood.

Nip’s studio became a point of reference for the kids in the neighbourhood and, because of that, began attracting police attention. The boys in blue raided the premises again and again seizing equipment and jewelry that was worth hundreds of thousands of dollars. These occurrences were very frustrating for Nipsey who had left the gang life to channel his energy into something more positive, thus becoming a role model for Crenshaw youth who normally wouldn’t have an alternative to the life of crime.

The Marathon Clothing Store, which was opened with money earned off the success of Nip’s first few mixtapes, was also situated on that same corner between Crenshaw and Slauson. It too became the object of raids, sweeps and shakedowns. Police harassment and prejudice towards his person, his businesses and his community were a regular occurrence and pushed the Crenshaw rapper to be at the forefront of the fight against police misconduct. 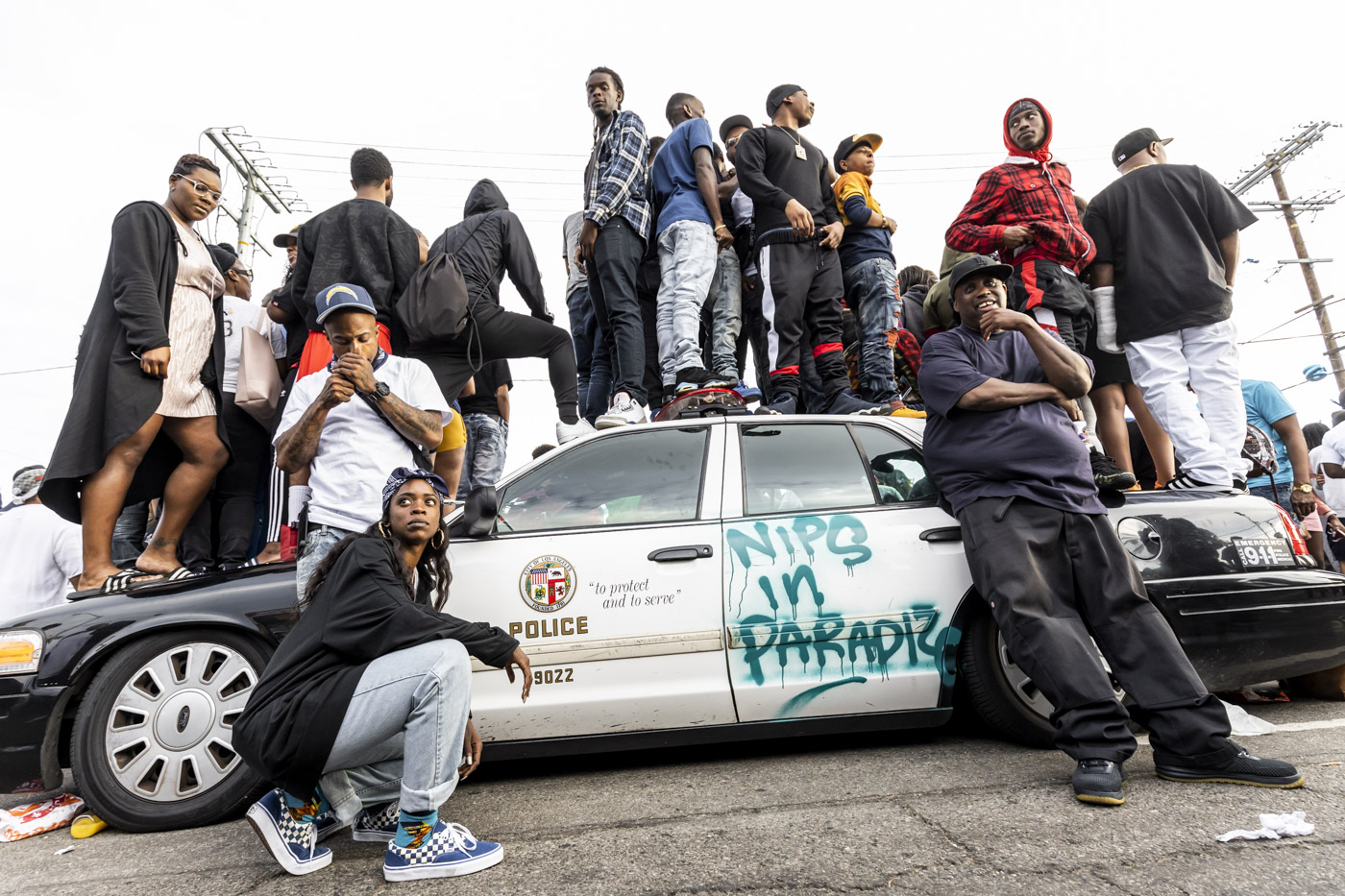 Nipsey Hussle’s musical career followed a gradual crescendo, from the underground to his debut Slauson Boy Volume 1 (2005), mixtape after mixtape. He eventually achieved an incredible success with his first (and last) LP, Victory Lap, released in 2018. This album also earned him a Grammy nomination. On his road to success the Crenshaw rapper never compromised his musical taste and love for the Hip Hop culture.

The message he was able to convey through his sound was one always central to the Culture. Nipsey used his success to reach as many people as possible. He was especially inspiring to kids coming from the ghetto, just like himself. Nipsey Hussle’s dedication, entrepreneurship and vision were all one with his music. When one is born with few or no possibilities at all it is necessary to have a clear plan and a dream always in mind to get out of dire straits. It is imperative to believe and work hard. Gang life was simply a shortcut to jail or early death. Nipsey’s mission was, therefore, to educate the youth in his community and in all the ghettos of America with his positive image.

“Proud 2 Pay”, pride and artistic independence according to Nipsey Hu$$le.

Nipsey Hussle has paved the way for many of his peers by showing them how to maintain independence and monetize profits gained from the music industry. In this way artists were enabled to bypass fraudulent contracts with labels and streaming sites. In truth, Nip enjoyed a brief partnership with Epic Records around 2008, during the release of his mixtape series “Bullets Ain’t Got No Name” and set up another equal rights partnership with Atlantic Records for the distribution and promotion of “Victory Lap” in 2018. However, Nipsey Hussle would remain an independent artist for most of his career.

In 2013, after launching his own record label called All Money, he started the “Proud 2 Pay” campaign with the intent of promoting his new mixtape “Crenshaw”. This campaign was aimed at creating a strong bond with listeners by focusing on a few simple concepts such as: respecting artists dedication, protecting artists from record industry schemes and appreciating their real worth. Nipsey put on sale 1000 copies of the Crenshaw Mixtape at 100$ each. Jay Z would be one of the first people to purchase, buying 100 copies. The whole batch would be sold out in just a few days generating a profit of 100.000 $ that was immediately reinvested in his businesses and music ventures.

The business ventures set up by Nipsey Hussle, just like his musical career, were progressing step by step, in an organic fashion:  every single economic success he achieved was channeled into new ideas and projects. Nip’s road to success was, in fact, a marathon requiring hard work and the correct frame of mind. However, Nipsey Hussle’s investments were not made in Beverly Hills or the financial and tourist districts of Los Angeles. He believed that the wealth he created, with his neighbourhood’s support, should be kept within that same community. He wanted to set an example for the locals so that they would no longer have their wealth and properties taken from them, but rather, learn to recirculate riches within the neighbourhood. 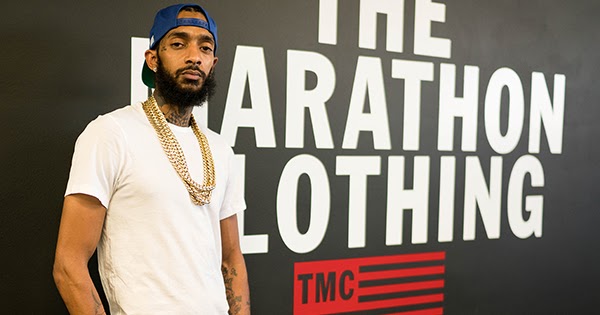 The Marathon Clothing shop, opened on the intersection where Nipsey Hussle’s story began, was getting ever more successful, then, it gradually became a brand and a clothing chain which provided work opportunities for the whole neighbourhood. The next step was to set up a space for coworking and a business incubator called Vector 90 on the streets of Crenshaw. this move would facilitate and incentivize entrepreneurship in the area. Just prior to his untimely death he had also launched Marathon Agency, a startup specialized in marketing and high technology, with a service app connected to his brand and outlets. Nipsey’s dream was to create a new “vertically integrated” business model, replicable throughout the whole United States, that would be made for and cater to the needs of the Afro American community.

Nipsey Hussle did not stop at being a role model for his people, leaving the gang life behind, going legit and giving back to his community, he also was politically and socially involved, always on the frontline.

Young black nigga trapped and he can’t change it
Know he a genius, he just can’t claim it
‘Cause they left him no platforms to explain it
He frustrated so he get faded

Only a few days before being killed he organized a meeting with the Los Angeles Police Department, in collaboration with Jay Z’s Roc Nation, in order to find shared solutions to gang violence. In addition he financed various social and education programs in his neighbourhood while publicly voicing his negative opinion on the violence afflicting the streets of L.A. Together with Y.G, another L.A rapper part of the historically rival gang The Bloods, he would publicly condemn Donald Trump’s divisive and discriminatory political tactics.

The story of Nipsey Hussle, unfortunately, had a tragic ending which was staged in the exact same spot where everything had started, his home turf, on that parking lot, in front of the symbol that stood for all he had achieved: the Marathon Clothing shop. The person who took him away from his wife (Lauren London), his kids, his brother, parents, friends, people and neighbourhood wasn’t a shooter from a rival gang or a cop but rather someone he knew well, that came from the same streets. Eric Ronald Holder Jr., is the killer who shot Nip, only a few hours after they had an altercation, and also wounded several other people at the scene. Ironically the enemy came from within his immediate circle, from that same community that Nipsey Hussle was trying to protect at all costs. He was simply caught unprepared.

The touching response to the death of Nipsey Hussle and the affection shown by fellow musicians, the city of los Angeles, the entire American nation and even by the L.A.P.D and certain politicians (among which Barack Obama) has been unprecedented in the Hip Hop world. This response clearly showed that the “marathon” started by Nipsey Hussle was an extraordinary feat, able to set a higher standard for the Afro American culture and community as a whole by inspiring artists, ghetto youths and minorities to follow in his footsteps. His death was a wake up call for many dormant consciences and revealed that envy, resentment and gun violence are still unresolved issues in the United States.