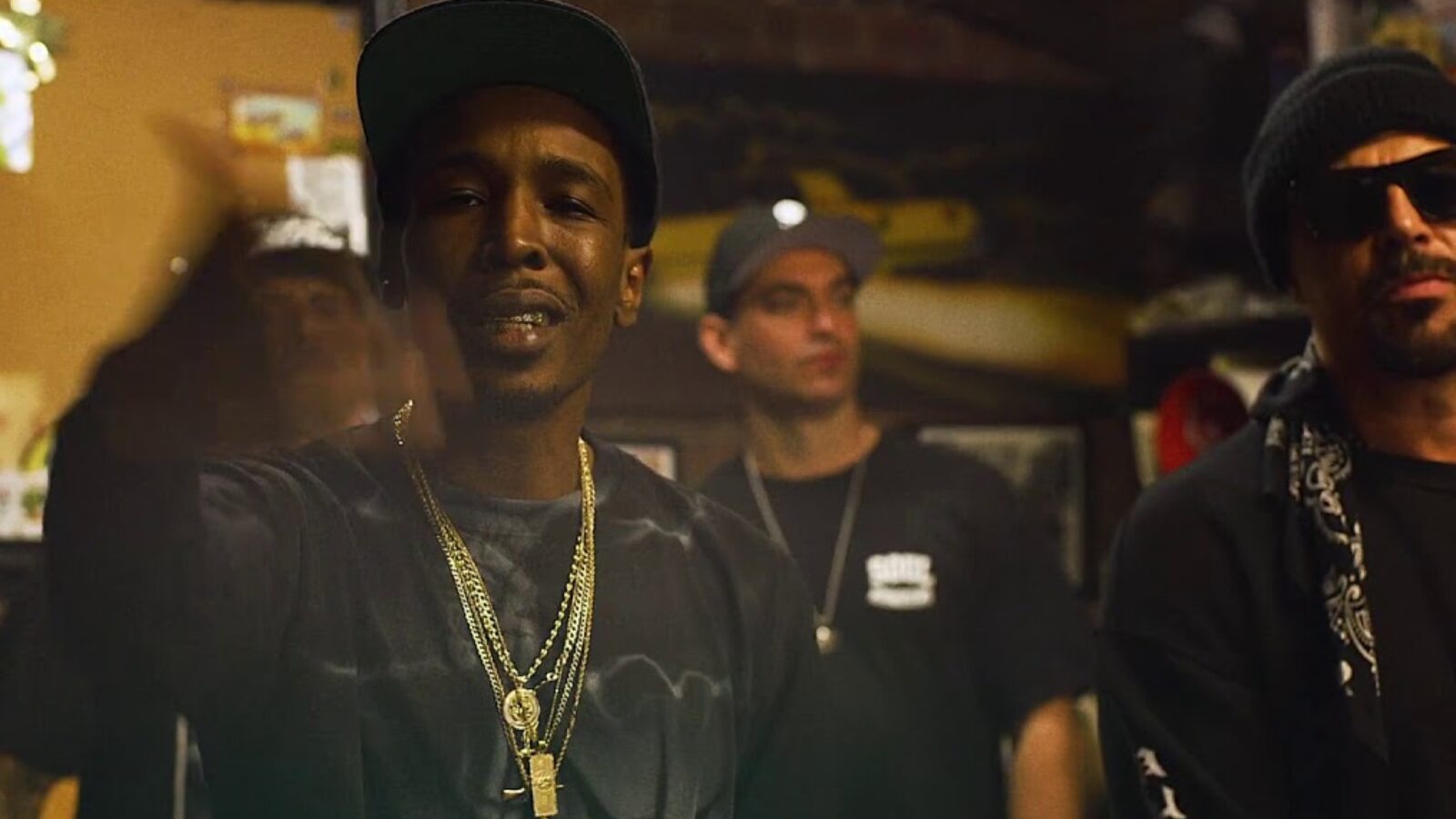 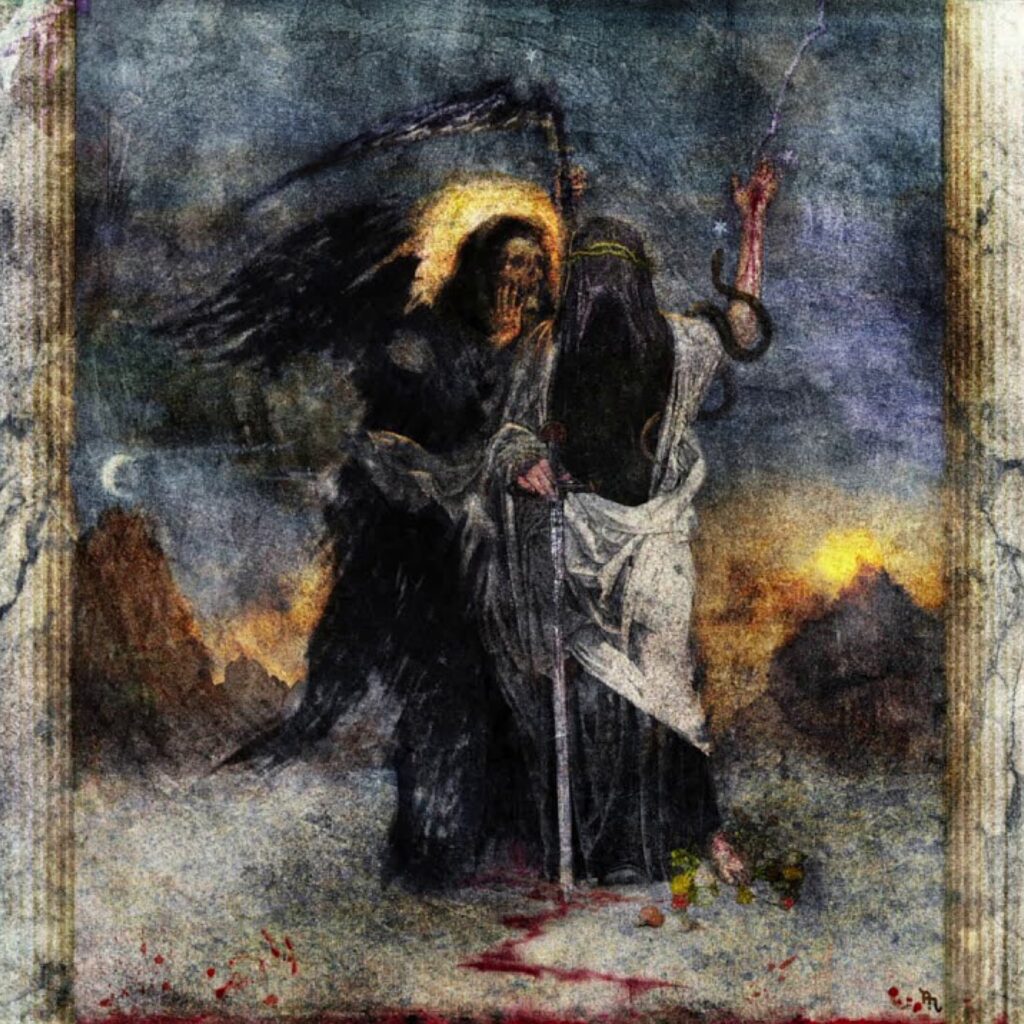 Far from being experts in tarot and divination, however, we know that the Magician, in mystical symbolism and among mythological figures, represents that human figure with otherworldly powers that can connect the world above with the one below of the dead. Following our interpretation, the Magician, we are talking about here, can only be the Cypress Hill legendary producer , Dj Muggs:  a mystical figure in Hip-Hop, who, from his cavern, continues to experiment some alchemical potions through his machines, recalling from the depths of the underground world, the strongest spirits. After Roc Marciano, Eto, Crimeapple, Meyhem Lauren and Al.Divino, he decided to draw from the deck one of the deadliest cards in the underworld, Rome Streetz. Death and Magic, together, however, can represent a new beginning or a resurrection: in short, the magical arts of Muggs combined with the murderous and pitch-black rhymes of Rome Streetz, lend us to a universe of symbolism and interpretations that prophesy a rebirth and a renaissance.

Listen to "Death and The Magician" 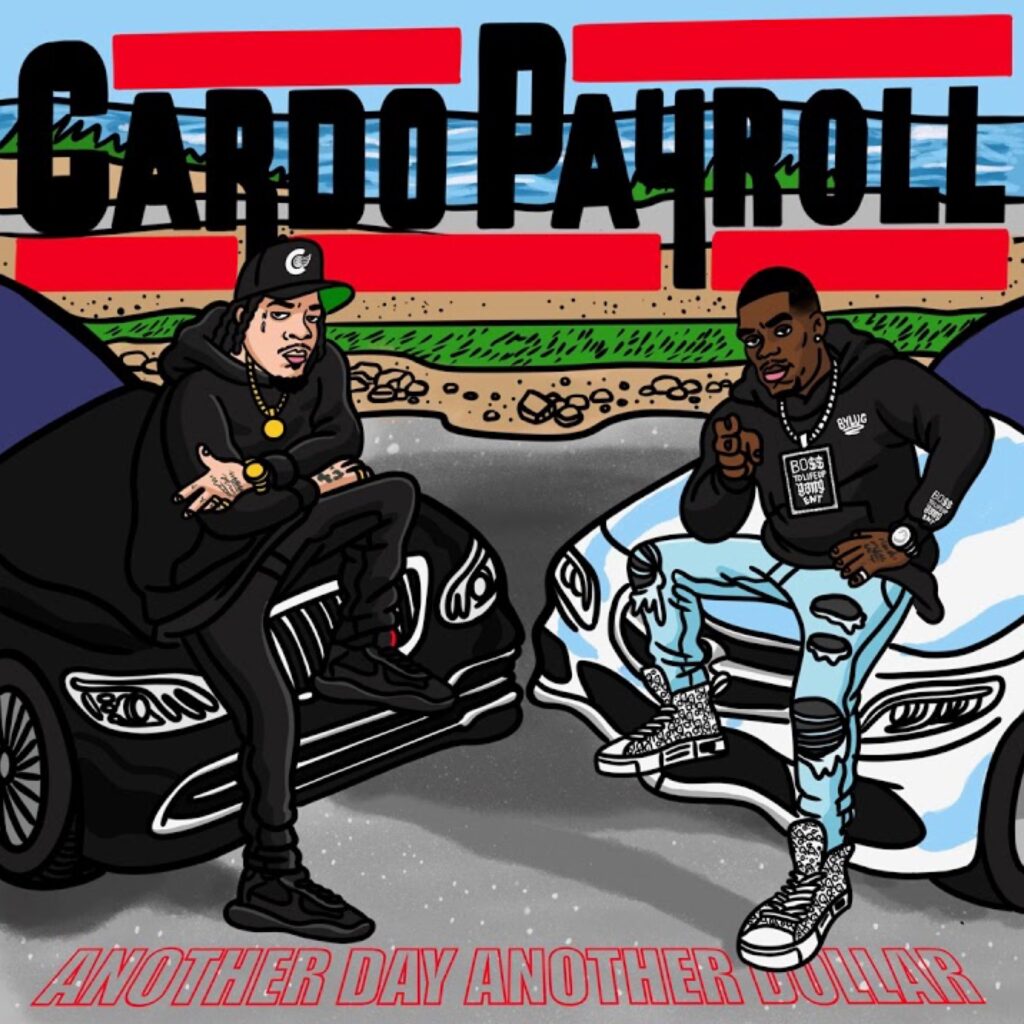 Try to pick one of the most ductile and successful producers on the American Hip Hop scene, born in Minnesota, but moved to the hottest places of Texas, known by the name of Cardo or Cardo Got Wings, and pair him with a Detroit rapper, the former Doughboyz Cashout member, Payroll Giovanni: if you didn’t know their background together, you could probably never imagine how the outcome of this unusual couple would work. Cardo, who has signed numerous successful hits from the ones with Jay-Z to the Drake and Travis Scott’s ones (just to name a few), when he plays on his own, has instead developed a very specific trademark, with a sound, which (if you could pass us the term) wink to West Coast and Bay Area influences. Payroll Giovanni, who has already collaborated with the prestigious producer in the past with the tape series “Big Bossin”, proves to be really comfortable along the 10 tracks of “Another Day Another Dollar” churning out a perfect condensation of “motivational rap “, as a sort of guide for hustlers and self made men.

Listen to "Another Day Another Dollar" 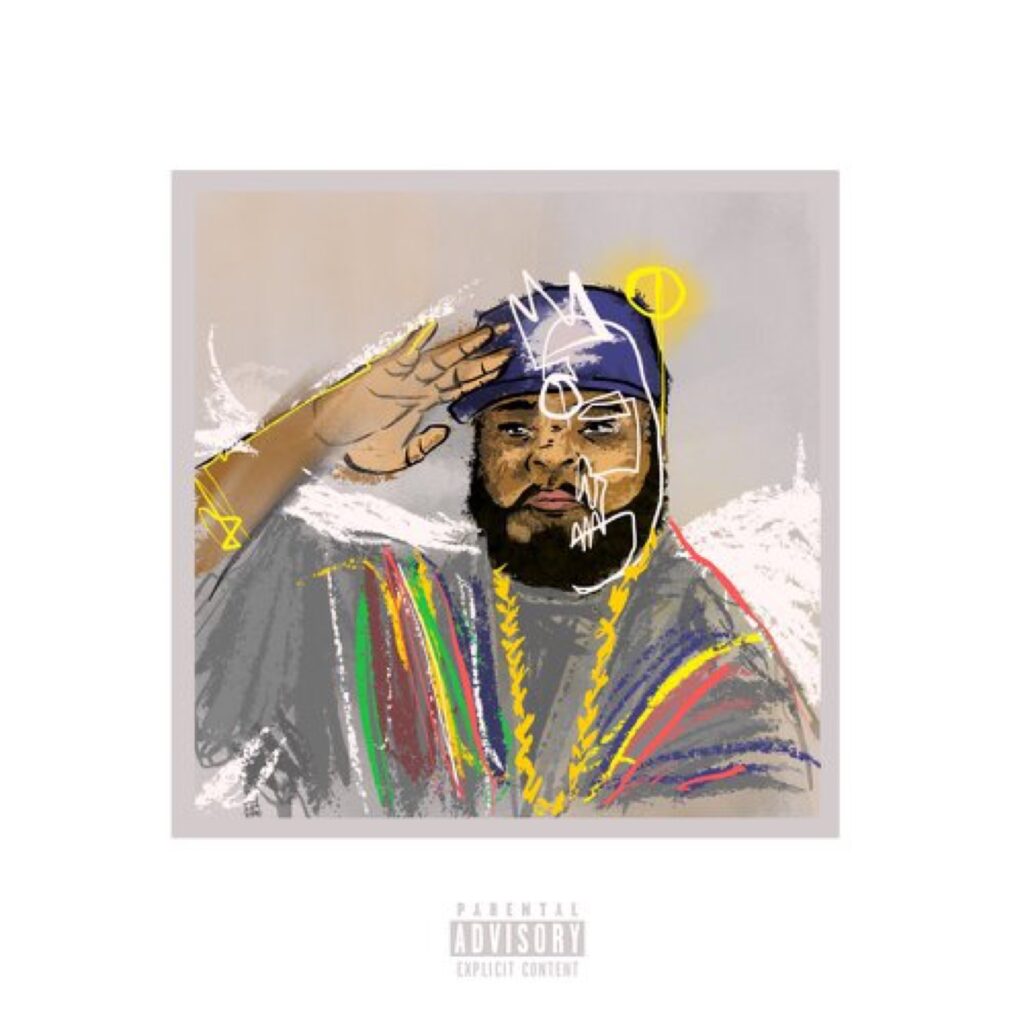 “Ascension” is, unfortunately, the first posthumous album by Fred The Godson, MC from the Bronx who left us suddenly last year due to the pandemic, that swept the whole world and which, at the beginning of last spring, was scourging, in a particularly uncontrolled way, the neighborhoods of New York. The release of “Ascension” on the birthday of the respected rapper, husband and father, took place simultaneously with the ceremony that saw one of the streets of his hood named after him, and it was the appropriate celebration and testimony of the contribution that this formidable lyricist left to his community and the world Hip-Hop scene. “Ascension”, is an album that allows us to relive the talent, genuineness and realness of Frederick “El Gordo” a.k.a Fred The Godson giving us, even, chills in certain moments. 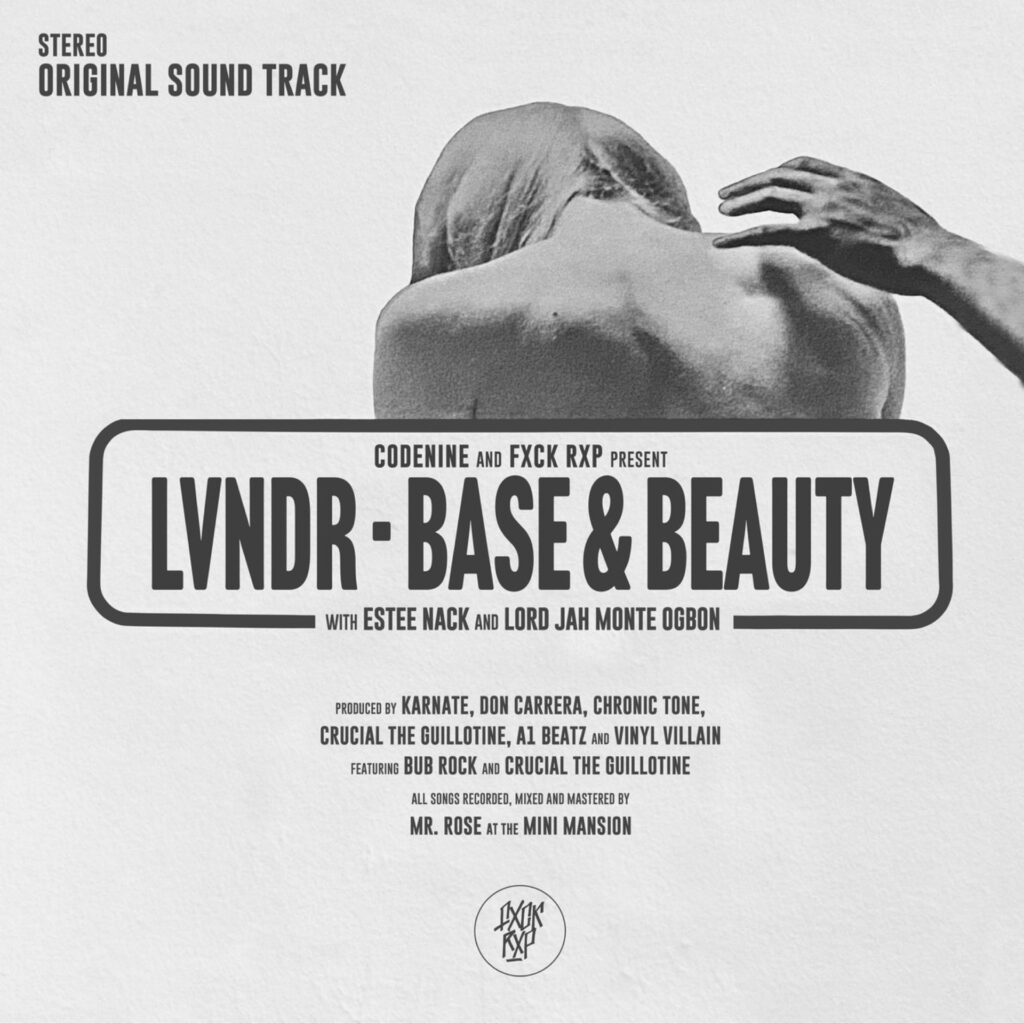 Finding a way through the multitude of international Hip-Hop releases, can be a titanic undertaking, like wandering through a labyrinth blindfolded. However, with the right references, you can come across some milestones, totems in the shadow of what is on the surface and distracts your gaze, but which has actually existed there for years, ready to give to whom is ready to listen, some oracle pearls of wisdom and respond to your thirst for some raw Hip-Hop. One of these totems is Codenine, a member of the Tragic Allies, along with Paranorm and, the best known, Estee Nack.  The MC from Lynn, Massachusetts, has in fact been in the underground scene for at least 20 years, distributing knowledge and reality through his rhymes, with perfect mastery of the art of Rap, while remaining wary of the lights and false idols that come from the surface. LVNDR, thanks to the exceptional musical carpet to the Codenine’s flow of rhymes, could represents your first step towards the supreme notions of this microphone master, accompanied for the occasion by Estee Nack, Bub Rock, Lord Jah- Monte Ogbon and Crucial The Guillotine. 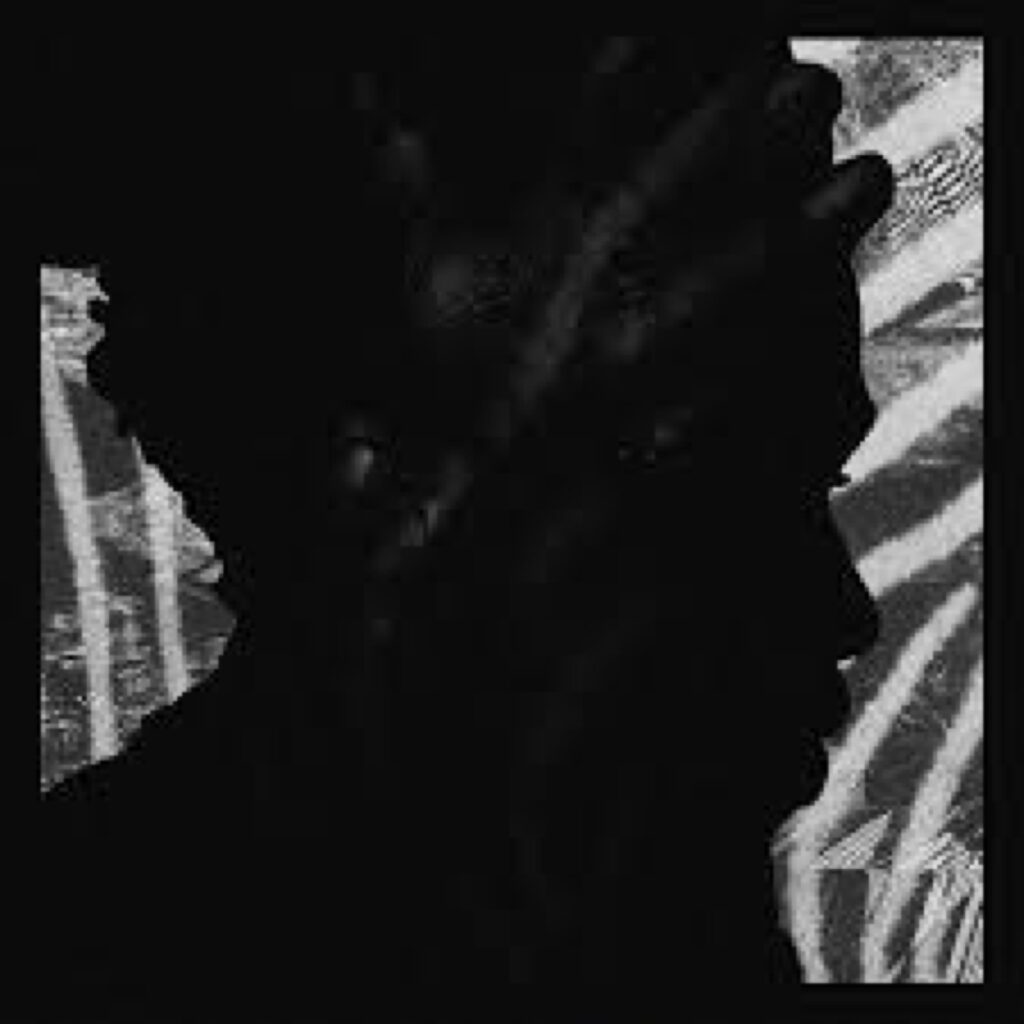 Those who follow us have probably already read on our pages about the collective of Richmond, Virginia, called Mutant Academy. This highly original crew that counts several talented MCs, including the best known Fly Anakin and Big Kahuna OG, and producers such as Foisey, Ohbliv or Greymatter MA, to name just a few, is what you have to chase away the bad vibes of the usual gangsta rap themes. Take, for example, the latest project by one of Mutant Academy accolades, Henny LO, entitled “Ree Louis“: the, as usual, beautiful and refined productions arranged by the various beatmakers of the crew, including Ray Robison, Foisey, Sycho Sid and Ewonee, match the stream of consciousness of Henny LO, who honestly tells the life, problems and points of view of a “common” boy, without filling it with the abused stereotypes. In times where the false mass narrative that Hip Hop must necessarily boast about guns and drugs has become repetitive and nauseating, the Mutant Academy / Scheme Team, with its very creative artists, represents a wave of necessary freshness. If from the American underground in recent years have emerged several groups that recall the spirit of groups as Wu Tang Clan and Mobb Deep, this Virginia collective could gather the legacy of groups such as the A.T.C.Q or the Pharcyde. 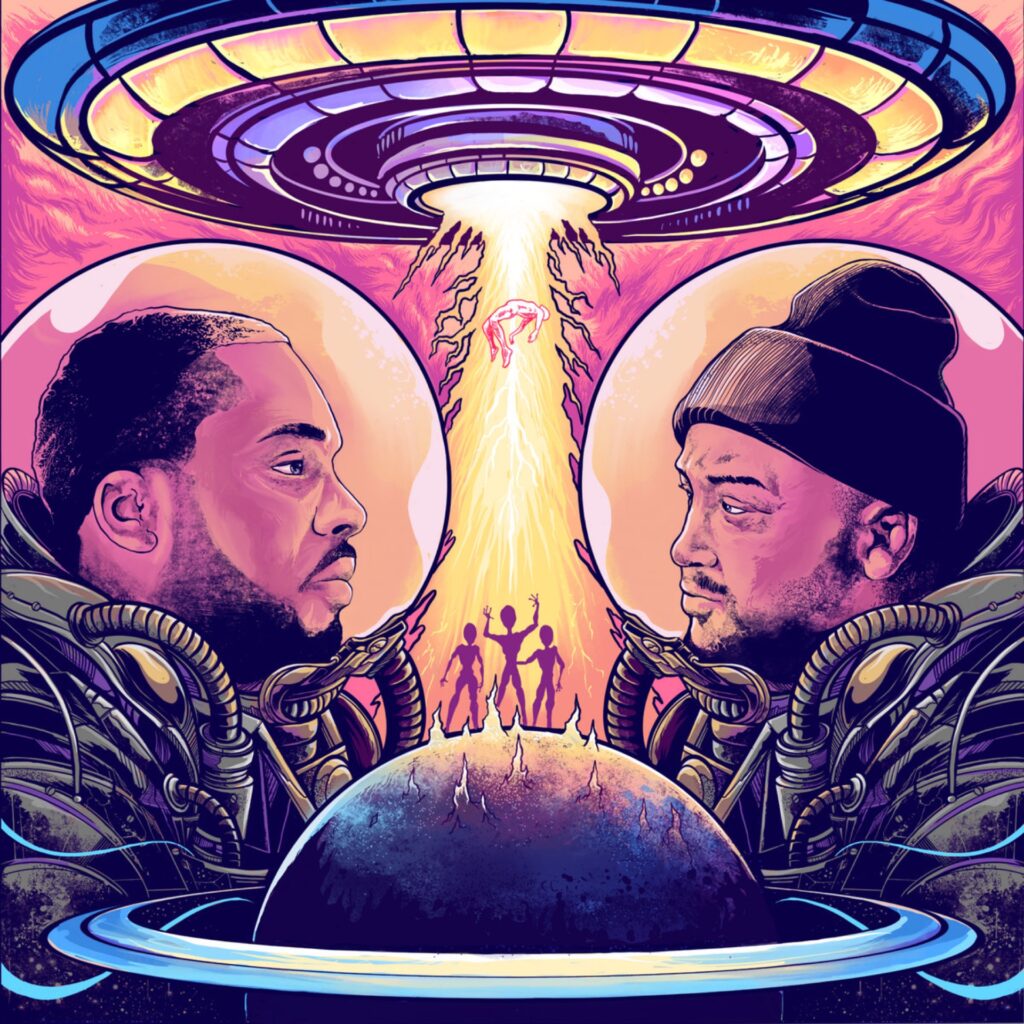 The improbable (but only on paper) connection between the excellent lyricst from Delaware, Jay NiCE and the dope Danish producer Machacha, leading artist of the independent record label “Copenhagen Crates“, that has already built relationships with the underground scene on the other side of the ocean, has given shape to an amazing project.

In fact, the beautiful beats of the Danish beatmaker enhance, in fact, the great lyricism qualities of Jay NiCE, who, as the title suggests, “A Stream Of Consciousness“, lets his experiences, knowledge and reflections flow, without schemes or forcing, resulting extremely natural and instinctive. The project is embellished, among other things, by the excellent featurings of Estee Nack, Recognize Ali, Napoleon Da Legend, Ru$h and Stack Skrilla. A few months ago, we were lucky enough to be able to interview this very dope MC who gave us the opportunity to learn more about his extraordinary creative talent. Do not miss our interview with him and mark Jay NiCE in your notebook of the MCs to follow closely.

Listen to "A Stream Of Consciousness" 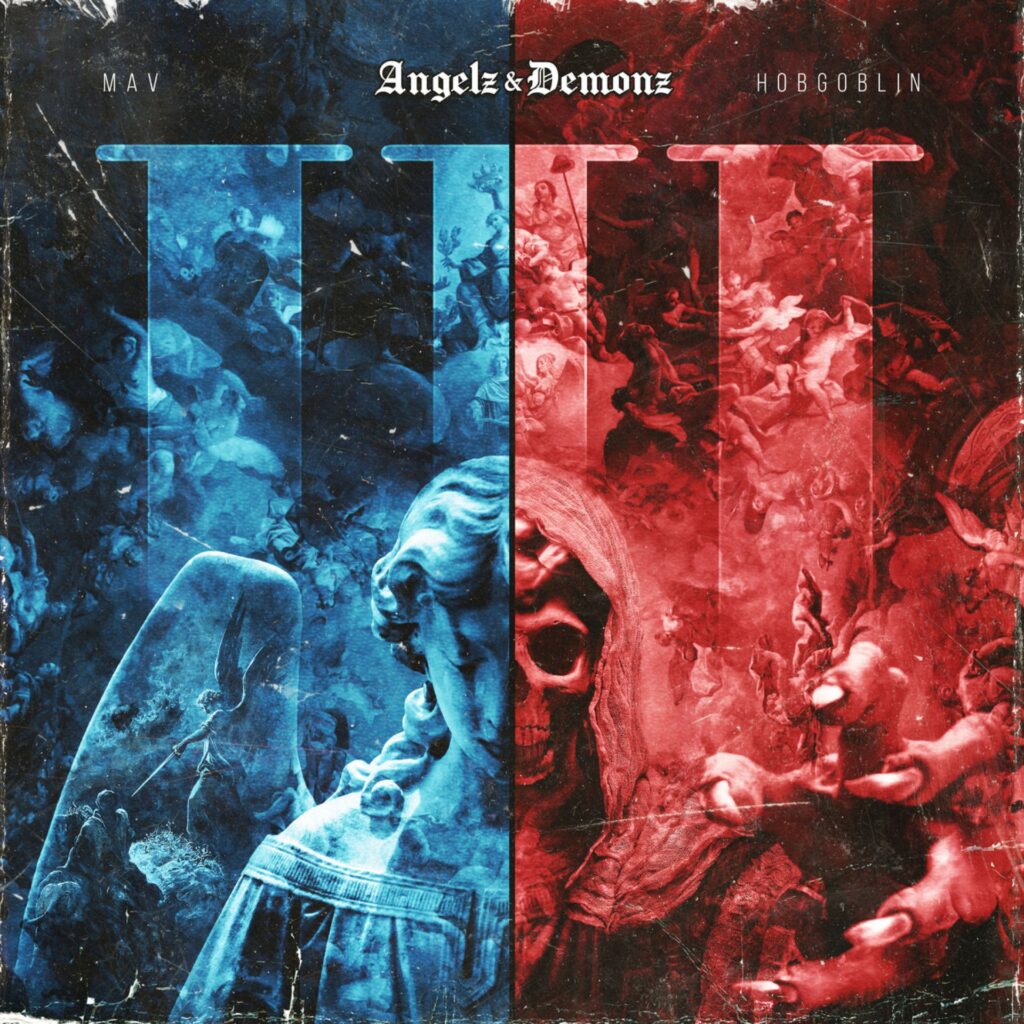 There are few realities in the American underground panorama capable of evoking that feeling of raw realism and those cold and gloomy atmospheres in the Mobb Deep style, such as the Rochester, NY crew, the DaCloth. MAV, who is one of the crew generals and founders, also in this third chapter of the saga of “Angelz and Demonz” (produced by the British beat maker Hobgoblin), does not provide us a chronicle of what happens in the streets today, but, as a elder brother, tells his experiences and the life lessons of a veteran who by now, fortunately, has come out of certain dynamics. Read the exceptional talk we had with M.A.V a few months ago.

Listen to "Angelz And Demonz 3" 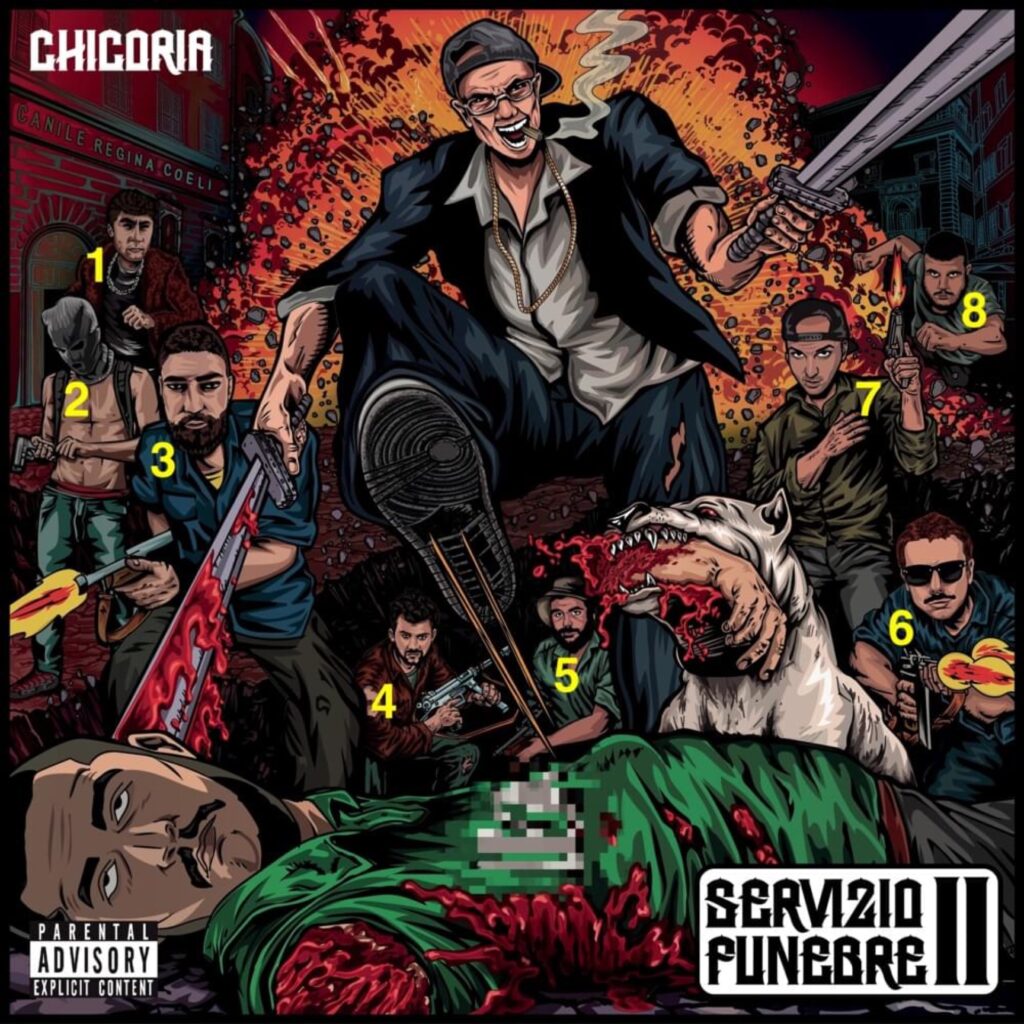 If there is anyone in the Italian rap scene who does not mince words and talks straight, that is Chicoria, of the ZTK crew. In this “Servizio Funebre part 2” Lp, the rapper and graffiti writer from Rome does not worry about anyone, by targeting even the Italian politicians. He showed that he still has a lot to say, expressing the voice of the streets, in a 100% Roman and Italian sauce, without having to imitate realities and attitudes that do not belong to his country. A raw and hardcore album, that simply tells what it is, without messing around with gimmicks and special effects, thanks also to the tight productions, most of which are provided by Depha Beat and the shrewd choice of featurings, from Massimo Pericolo to Brenno Itanni, passing through Mr. Pooccio, Barracano and Ugo Borghetti. 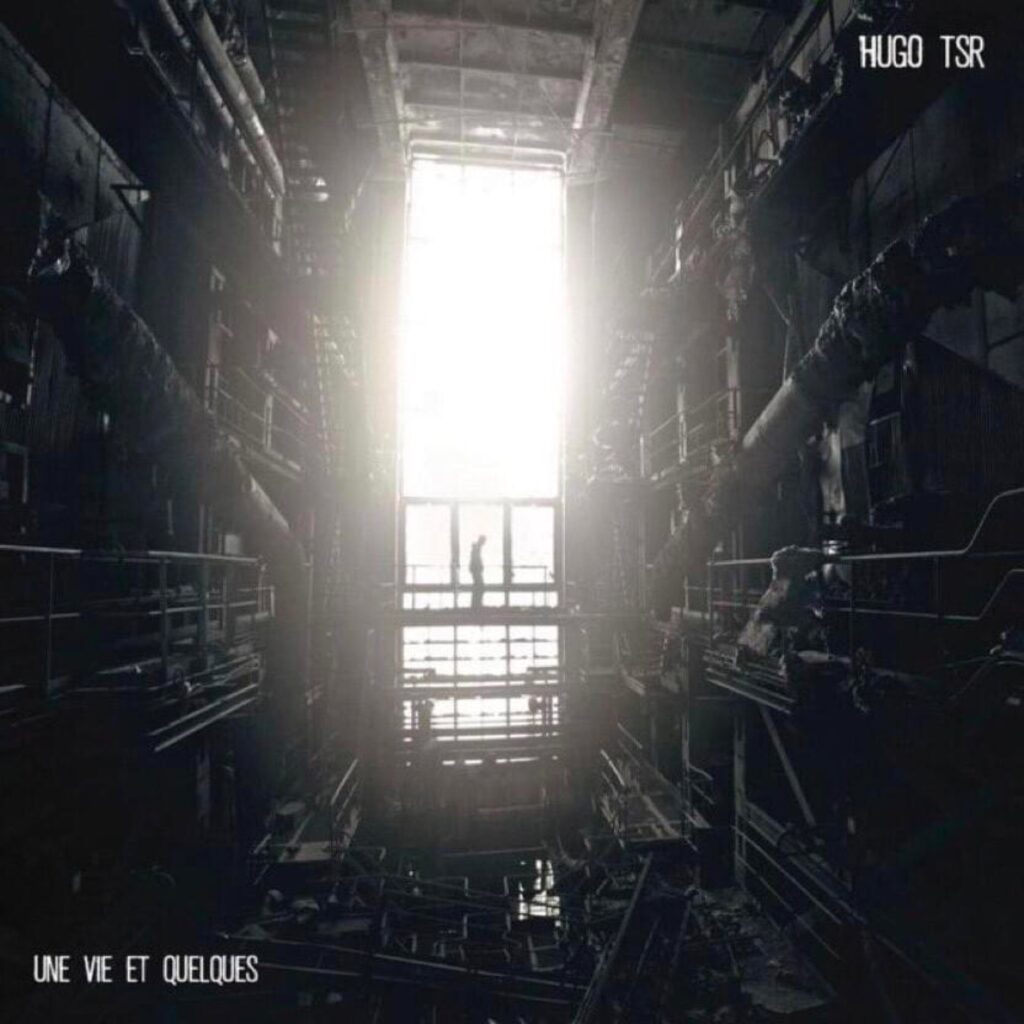 After a hiatus of almost three years, the return of Hugo TSR, the top rapper of the TSR Crew, finally has arrived. Boom bap nostalgics and those who love the aggressive flows typical of the French golden age will be pleasantly surprised by a product that remains faithful to a well-defined classic style, both in the lyrics and in the productions. Street, poverty and the description of a gloomy and dark Paris, almost compared to a prison, are the three elements that make up the common thread of the record. Hugo TSR talks about his neighborhood without filters, exposing the oppressive reality in which he lives. The ten tracks, including four produced by Hugo himself, recall and pay homage to the typical 90’s sound, with an interesting and accurate choice of samples. A strong album with personality that confirms the will of the rapper born in ‘85 to remain independent from all points of view.