Hello Mr. Acker, how did you choose your name? How did you begin your writing career? Are you part of any particular crew?

The story behind my name is quite complex. I will try to be as concise as possible. I first discovered the Hip-Hop culture through a friend of my brother. He was mainly break dancing but now and then he would embark on a bombing tour around the city. His tag was Ekans. I tried to emulate him and my first choice as a name fell upon Arbok. At this stage I was only using it to fill up my school notebooks with doodles. The first tag I actually used on walls was Arakne/Aracne. I used this name for about a year, then I had to change due to the fact that I had completely vandalised my neighbourhood and some bad guys were looking for me. I had to find a new name.

After a few trials I chose Acker because it was almost a perfect anagram, leaving out the N which I never liked as a letter anyway. After many years of bombing walls and trains I had to switch my tag once again because the authorities were hot on my trail. I couldn’t write Acker any longer so I settled on Mister A. The letter A had accompanied me since the very beginning (Arbok, Aracne, Acker) and therefore seemed like the perfect synthesis of my journey thus far. It was only when I had solved all my legal troubles that I decided to unite the two names and call myself Mister Acker. I was no longer hell bent on illegality! Sometimes I still use Mister A and Acker. I am part of the Skill Burners, a crew that started out 2 years ago as a Palermo-Messina connection. We started out just for fun but we have now grown to 7 members: Mr. Acker – Felix – Proe – Terun – Rosk&Loste – Smoke. We are all Sicilians apart from Smoke but we decided to include him anyway because he is Sicilian “inside”, even though he comes from Veneto in northern Italy. Our objective is to be an example to the youth, both Sicilian and nationwide.

When did you begin to realize that you had a special talent and that you were fully part of the writing scene?

Let’s say that i showed a particular knack for letters since the very start. During my first year there would be a visible increase in quality between one piece and the next. I always knew I had talent but talent alone is not enough to reach objectives. One needs constant study in order to evolve. As regards the writing scene, I honestly have never considered it much. I am always looking at those who have more skills than me. They are the true Italian scene and I am flattered to even be mentioned in the same bracket.

Throughout the years what has inspired you to achieve such an accurate style?

I feel that all stylistic evolution is an extremely personal thing. As I already mentioned during my first year as a writer I must have experimented at least 15 different styles. Every time I painted I tried something new. After 2 or 3 pieces I would switch my style. When I started out there weren’t many local writers that were interesting to me, but I have to say Enyz has always been a strong influence. I was mainly checking out writers on a national level such as Blef, Bero and Twesh. They were greatly responsible for me developing my own style. By taking inspiration from different sources and uniting these influences I believe I have managed to create something entirely new. In time I have perfected and evolved my capabilities and I hope I can continue doing just that. I strongly think that one of the most important creative processes is knowing how to copy. As I said before, if you are able to take two distinct styles and create a new one by uniting them you have activated an important creative process. Those who are able to copy in a conscious manner are the best. 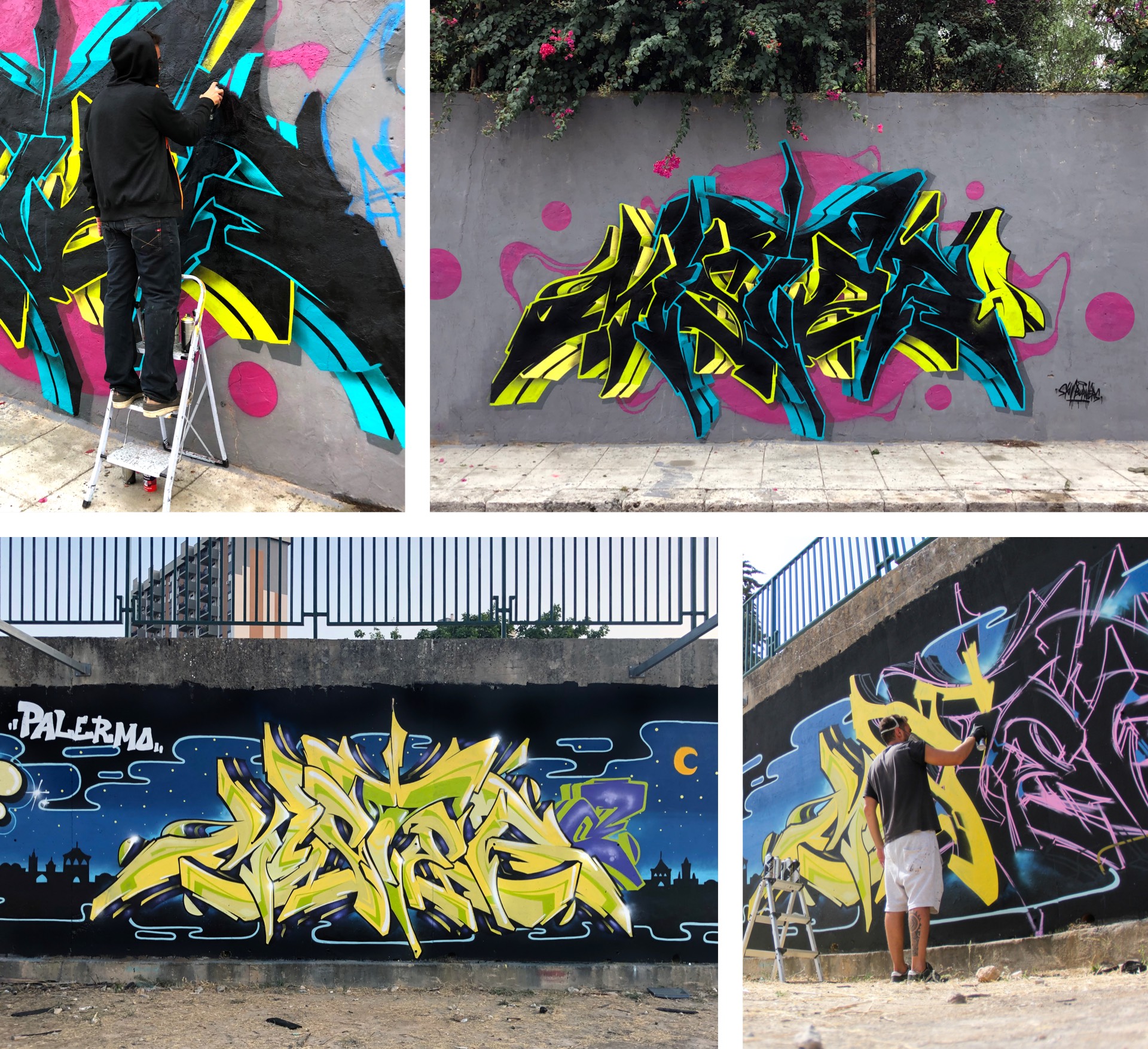 Tell us about how Italian writing is different today compared to when you started out.

Well, for a start when I began around 2004 the Internet was not a major factor as it is today, therefore in order to see new pieces and gain references you had to visit historic halls of fame or buy writing fanzines from local graff shops. The movement was strictly underground in those days, not mainstream. If you were a writer you were seen as a “weirdo” not as an artist. Nowadays instagram shapes trends and fads whereas back then you had to be in the streets to fully appreciate the world of graffiti. It was necessary to connect with the people who were a part of that world. The coolest cat was the one who had painted the most inaccessible spots or who had the most train panels in the system. Today fame is measured by social network stats. Everyone wants fame and glory. It seems that the only important thing is having lots of likes and followers but I don’t care about that kind of stuff. Paradoxically I could post a picture and get 10000 likes, but the only ones I will be interested in are the people that i respect personally or artistically. I’m not necessarily saying that the old ways were better, it’s just different. Graffiti like everything else is evolving in a different direction compared to what we were always used to. Take technology as an example: 20 years ago we would feel cool with just a Nokia 3310 or an Alcatel. Today we have smartphones with amazing photo capabilities and our internet connection is always active. These changes have had a big impact on the graffiti community. 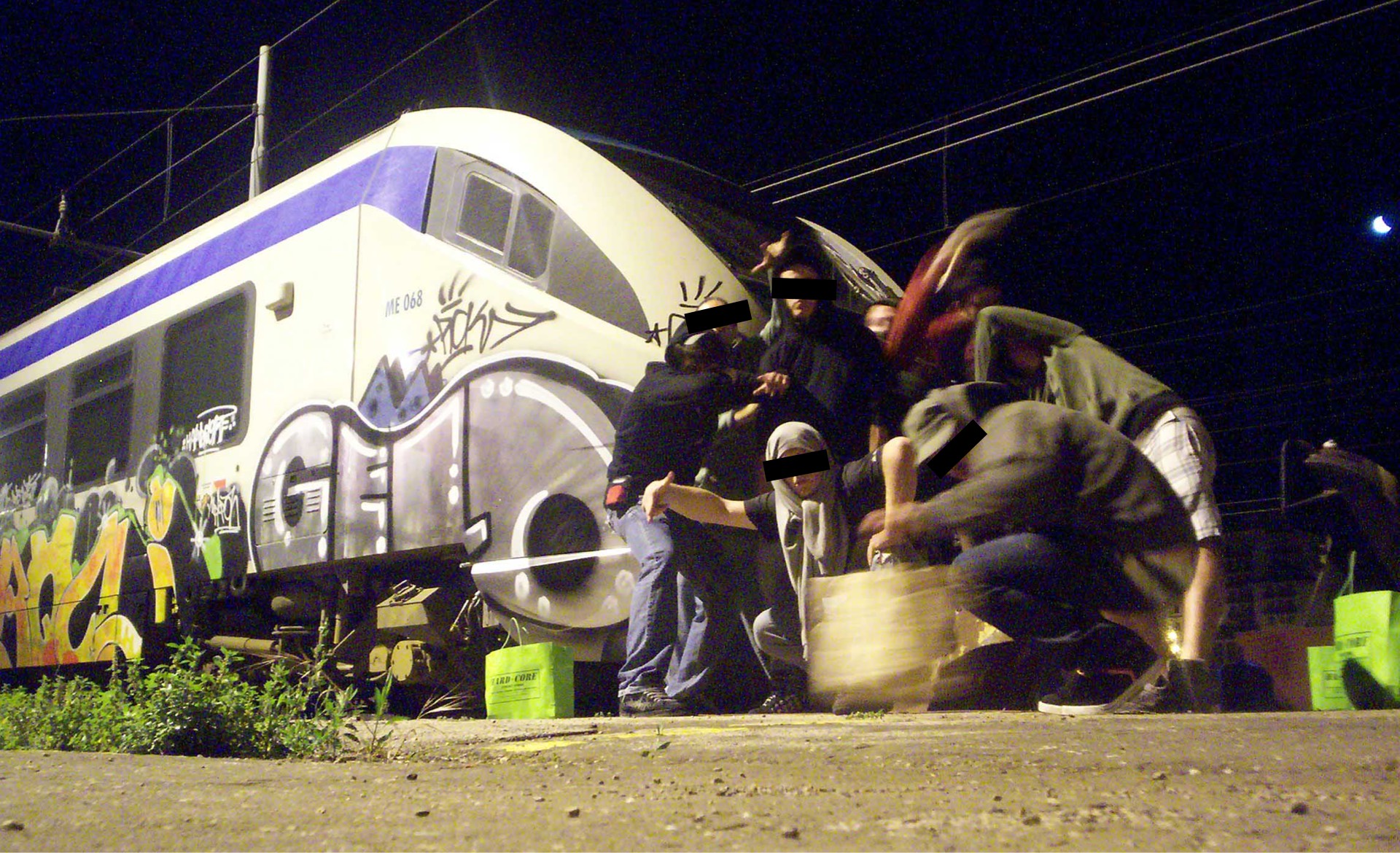 What life lessons has this noble art taught you? Do you have any anecdotes to tell us about the so-called “illegal” scene?

This “noble art” has both given and taken a lot from me. From an economic standpoint it is disastrous. Emotionally it cannot be compared to anything else. However, given the chance, I wouldn’t change a thing. I believe it is necessary to learn from one’s mistakes. In my case a “misfortune” (legal troubles) led to a professional outcome. My woes have turned to blessings as I turned my passion into a real job. I felt I had to continue, one way or another, so I started to digitalize my sketches. I progressively bettered my knowledge of the necessary computer software and studied graphic design in an art academy. Now I am able to support myself with what I love. As regards the anecdote, I’m going to tell you about an incident I have already mentioned elsewhere but i really think it’s amazing so here goes. It was 18.30 on the 26th of March 2016. It was a Saturday evening like many others on Castelnuovo square, which we affectionately used to call skate square. It was a meeting point for the underground Hip-Hop scene in the 2000’s: skaters would practice their tricks, mc’s would spit their bars, breakdancers would try out their routines and writers like us planned the next spots to hit. At that very moment the Stranamore (Italian TV show) van, all white and shiny, pulled up to shoot an episode on the square. In those days we were glad to accept crazy challenges. I remember saying out loud “I would really love to hit that van with a nice throw-up” and someone answered “seee un ta firi a fallu” (meaning you couldn’t possibly pull that off). Next thing I knew I was dashing towards the van with blood injected eyes ready to do my thing, after having taken a few precautions obviously! Salvo the skater followed me on his board, old-school cell phone in hand, to record the action, I quickly spray-painted a big one-liner tag on the side of the van and then ran off at the speed of light as the innocent bystanders were left trying to figure out what happened.

How would you define the artistic concept behind the drawings and colours you use? Tell us how this concept has evolved throughout the years.

I always loved wildstyles. Even if you can’t read the piece easily its interlacements, volumes and shapes will always catch your eye and generate emotions. During the years I have often striven to find a balance between the single letter and the piece in its entirety. My aim is to interlace letters without stressing any particular glyph. Other times, when I had to paint train panels and speed was the major factor, I managed to simplify my style by maintaining the same letters as my wildstyles but less interlaced. The letters would be fatter and more simple. I still use this technique today when I don’t have much time to paint.

Aside from painting walls what other supports and techniques are you familiar with?

I have dabbled in all of the writing categories: street bombing, trains, sketches and walls. Each category is associated with a particular emotion and a true writer must experience all of these at least once in a lifetime. As I grew my priorities changed. I don’t feel comfortable acting illegally anymore. I have too much to lose and too many responsibilities. Lately I have only been painting halls of fame and sketches using vector drawing programs. 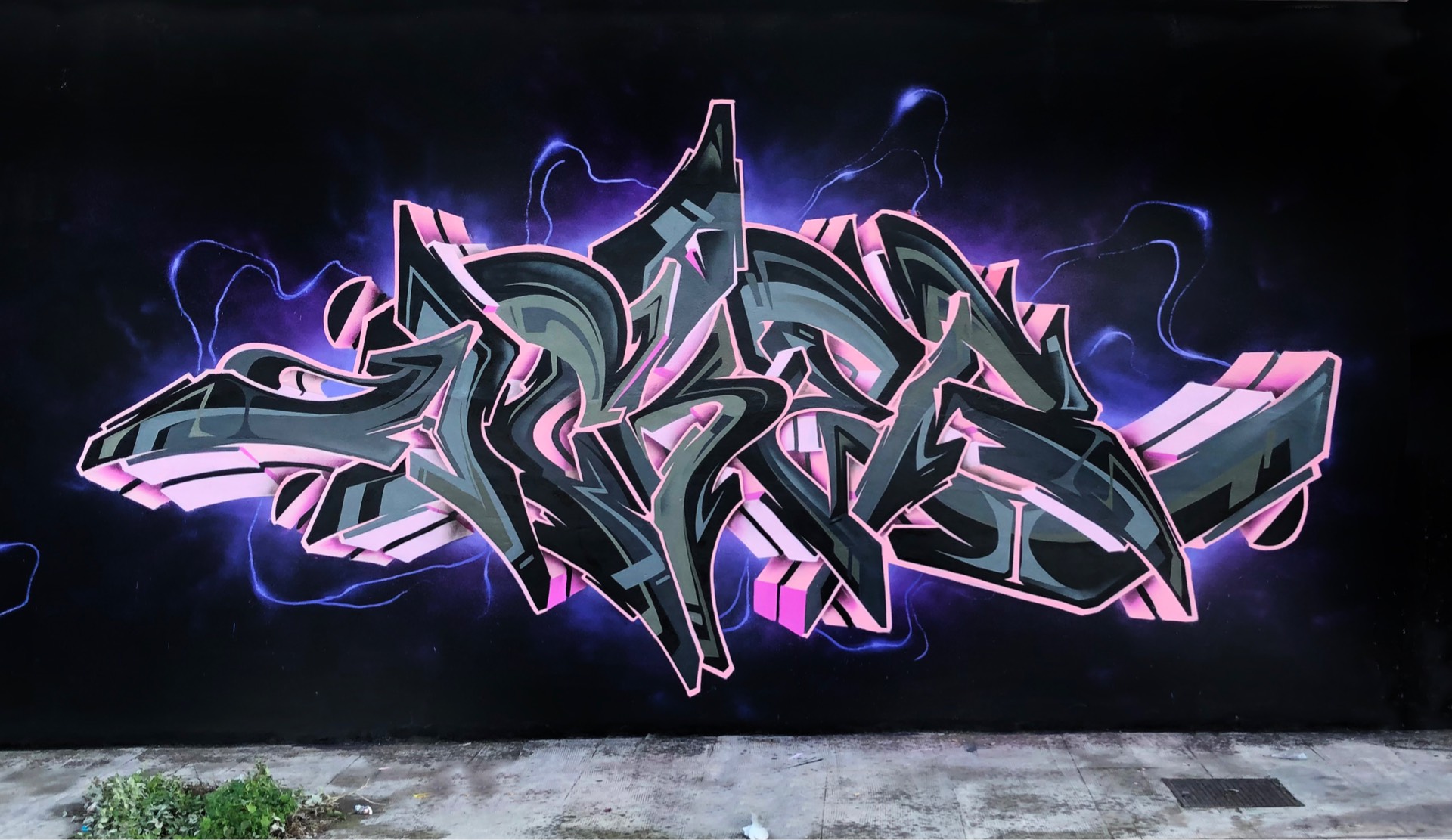 Aside from writing what else are you passionate about?

I have always enjoyed soccer, I have played for various teams at a professional level but due to injuries I had to quit. Now I just play friendly matches during the week with some pals. I am also a die-hard Palermo supporter! Another one of my passions is graphic design. I spend my free time playing online playstation games with friends.

What advice do you have for kids who are just starting out as writers?

My advice is learn from the best. Study their lettering and try to reproduce it. You must practice daily to gain confidence in your skills. Paint in abandoned buildings day and night, over and over, to better your use of spray cans. Above all paint for your own pleasure, you must like your own work. Substance over form. Fame and glory ain’t shit!

What are your plans for the future? Where do you see yourself in a few years?

I used to have a lot of different projects, but lately I have decided to take things one step at a time. Many times if you set fixed objectives you will rush to meet them. Right now I want to live in the moment: paint when the time is right, travel a lot, cherish the moment, meet and collaborate with new people. How do I see myself in the future? Same as always really: painting walls, working hard to make ends meet maybe with a little one crawling around the house but we’ll see ;). 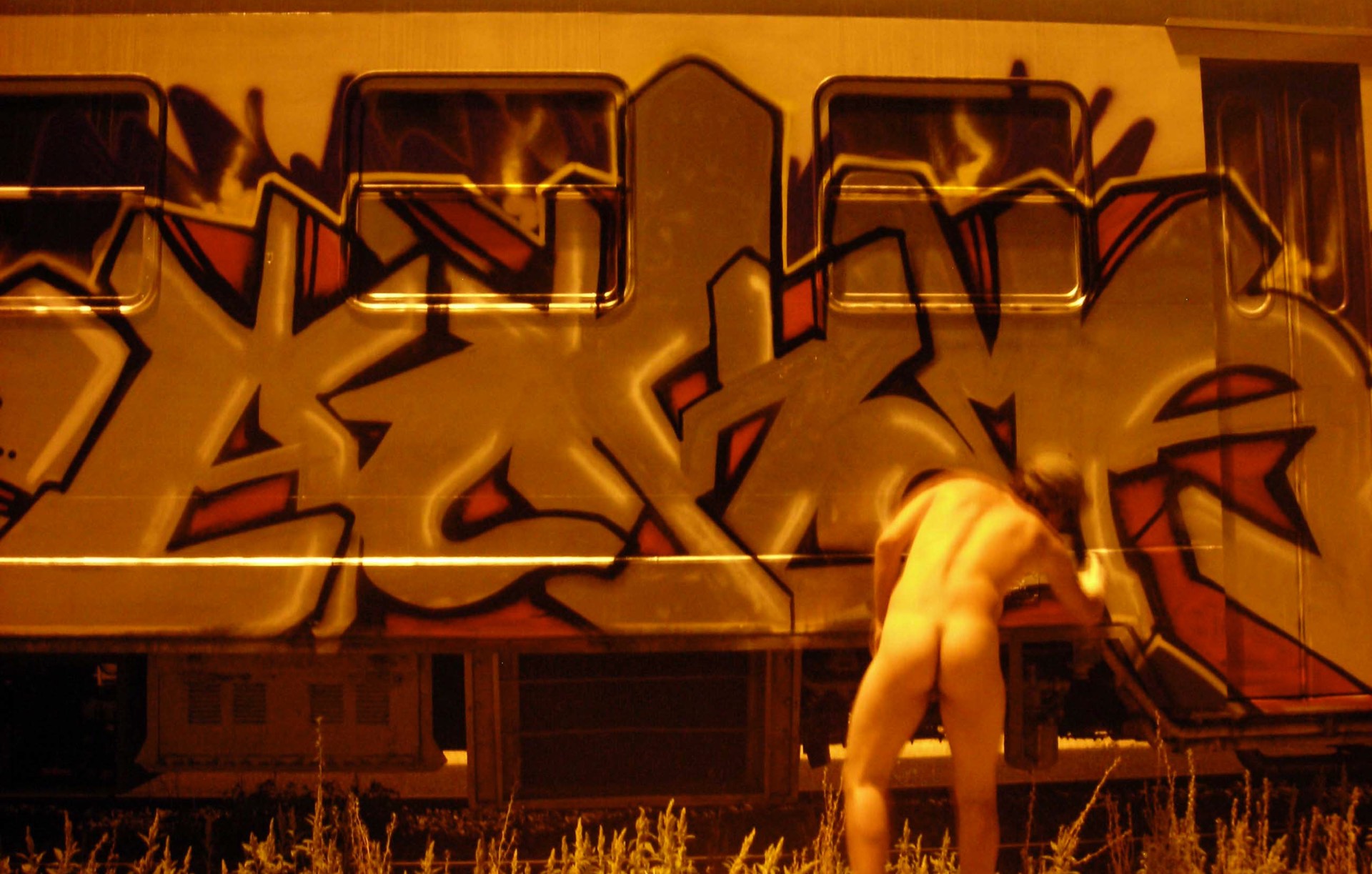