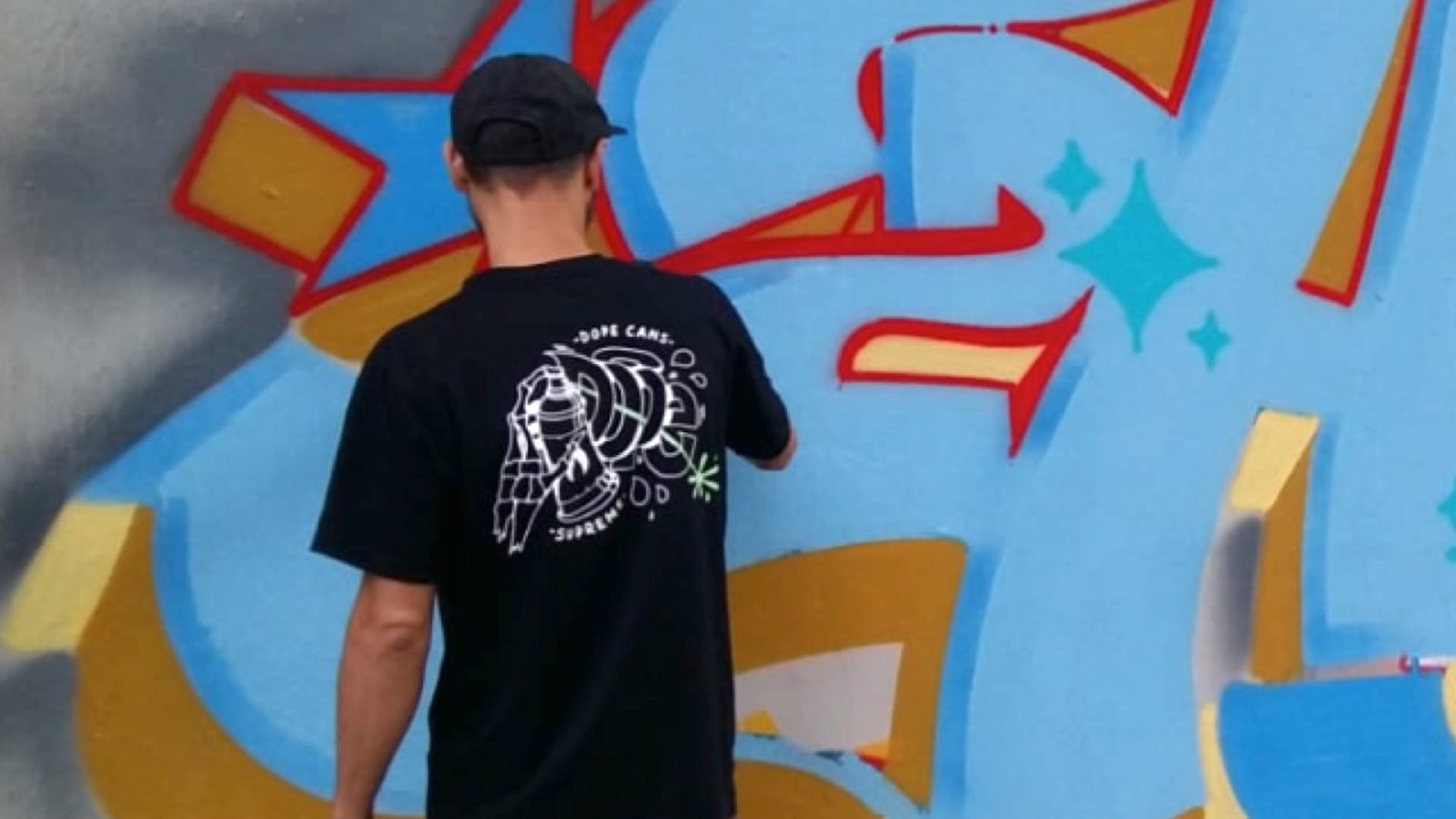 Hi Bepsy! Thanks for the availability to answer some questions. First of all, when and why did you approach Hip-Hop culture? Do you remember when you first pick up a can? Who or what pushed you?

BEPSY:  “Hi Guys, thank you! Bella a tutti! I’m Bepsy also known as Becco. 🙂 I am part of the Baggio Native, IEN Solids and WLA Crew (with the Fantastico / Mitico Sera of Grosseto, Italy ).

I approached the Hip Hop culture in 1994 in the first year of secondary school, looking at the walls around Ortica (a district of Milan); mainly of the legendary CKC / TKA and above all in Baggio, where there were Con and the SAD and then always in the Hood. I spent every day there , at a beautiful bulwark in Villa Amantea with Dosey, Chief, Shad, Sky4, Lemon. 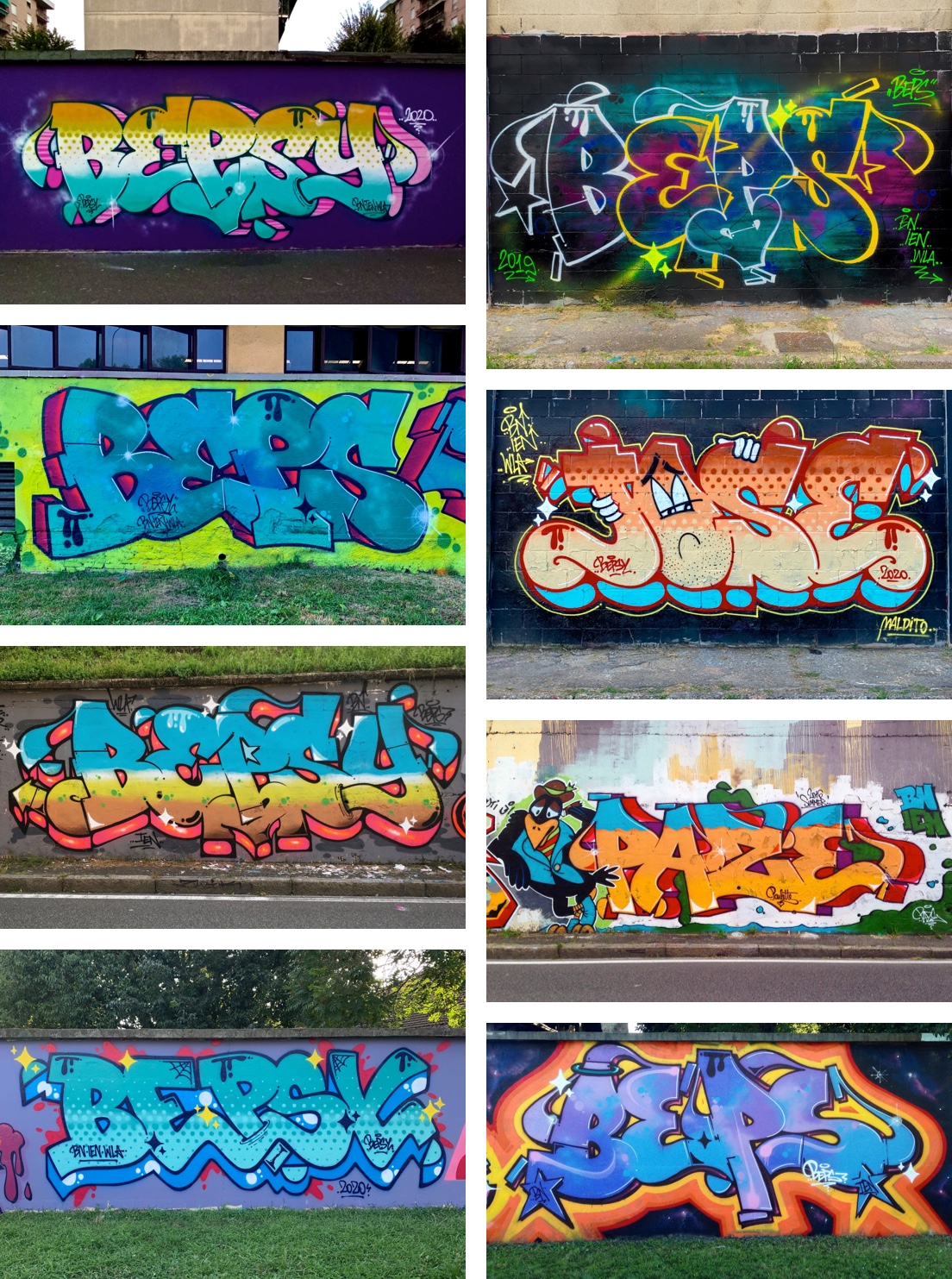 Then we devoured a few foreign fanzines and especially Aelle Magazine (AL)  where we were greedy for photos of graffiti, tags, trains, subways and all things. In 1995, the first online piece behind Ikea in Corsico, I bought SxM by Sangue Misto, HELL ON EARTH by Mobb Deep e WICH DOOBIE U B? by Funkdoobiest from Time Out, alongside the immortal Wag! Big up Alby! I still have those CDs paid in lira.

But now I don’t understand Hip Hop and I don’t care, I do letters and listen to rap, that’s all.

Let’s go back to ‘95/’96, I was in class with Kor aka Mes and Hakeem (old WWF / BN member). It is thanks to them, especially Mes, of my neighborhood that we went together on adventures in the East area. It took us an hour and a half to go, and then we tried to tag and throw up in our own areas. The very first things were in Hof at Trezzano sul Naviglio; walls that are still there today.

You are part of the historic Milanese BN crew… Can you tell us when and how you became part of it? Do you have any particular memories that you want to share with your followers?

BEPSY: “BN is like a family to me, we have known each other for more than 25 years and I still remember some old telephone numbers from my heart. Just to say … It’s very difficult to catch everyone but we always try either for dinner or for a wall.
The last beautiful Reunion was in May 2020 on the occasion of the restoration of the Leoncavallo wall. We made the first one in ’98, and then every five years we do it again more or less.

It was February’97 and I remember very well that we did a Whole Car in San Cristoforo, it was very cold, I put the silverware on with the promise to join the crew by some (which was fake). I believed it and put them on.

Then, they finally told me to ask Dosher! I called him at home, at the time he lived in Cesano. He laughed at all of this. Then, they heard Mes and Dosher, the two founders and finally let me in after a couple of days from that silver hit. I was perhaps the tenth. 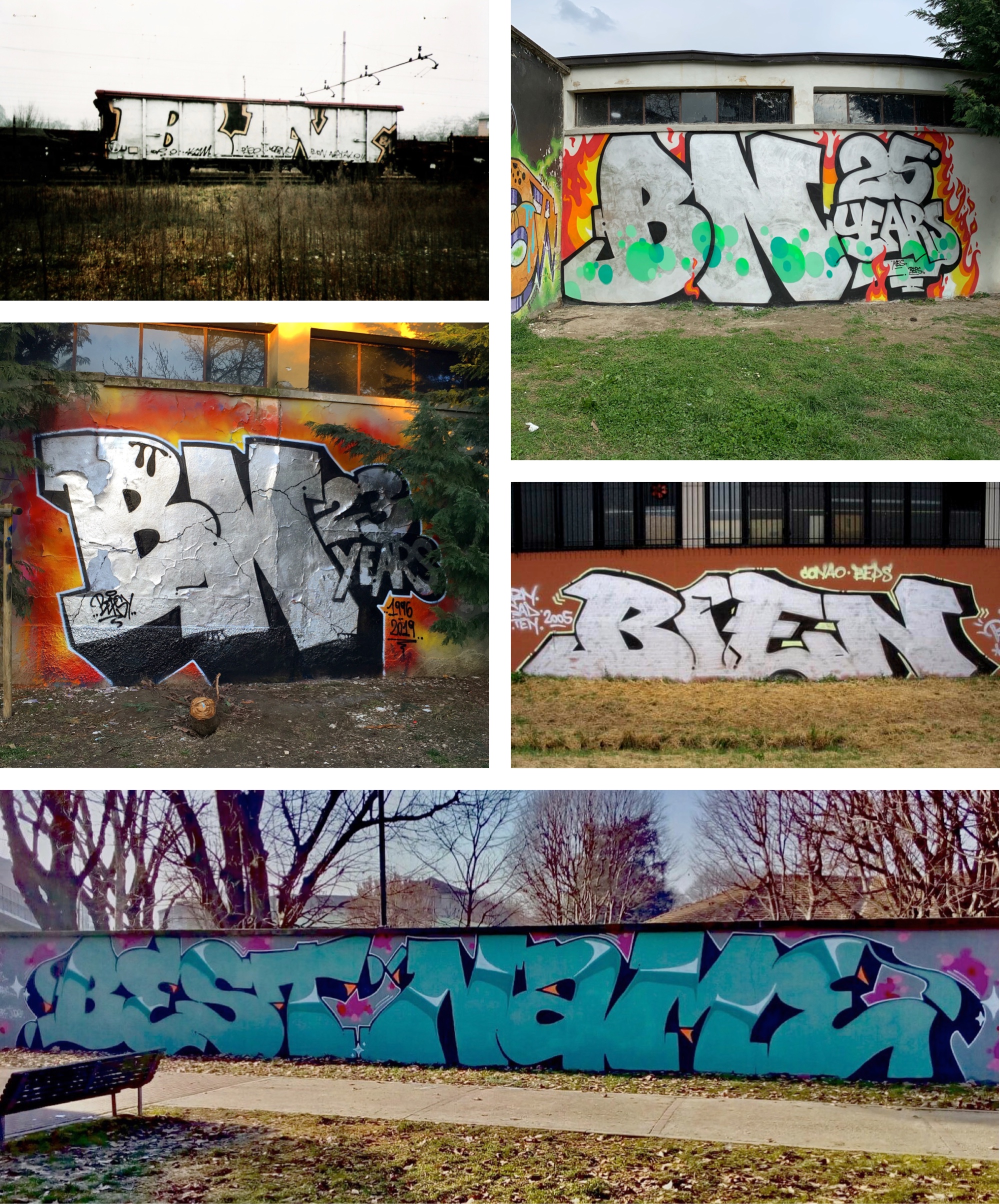 Just to have a flavor in chronological order, you can find the list from 1996 to date,   excluding the inactive and the one that went in and out around : MES DOSHER, DJ YANER, CLAS, IMPO, BEPS, OPE CONE, ZEN2, ANTIMAK, VELENO, GAS, PAZOL, JUDO, ONEMAN, ZOKA REBEL PHANTOM, BOOST, ENTICS, SKY 4, MIEDO. The last to get in the crew was ROMPE on November 30, 2010.

Tell us about your style … How would you define it and who were your main sources of inspiration?

BEPSY: “I’ve always loved letters, 20 years ago I made unwatchable wildstyles, I couldn’t do arrows well, mostly even today! AHAHAH… I prefer the simple and legible line and I often change my name from Beps to Josè, from Paze to 2Huge, TIcal, Yusuf… in short, I always try to change the letters, to fit in as many combinations as possible.

I’m obsessed with one-liner throwies, I will never find peace! 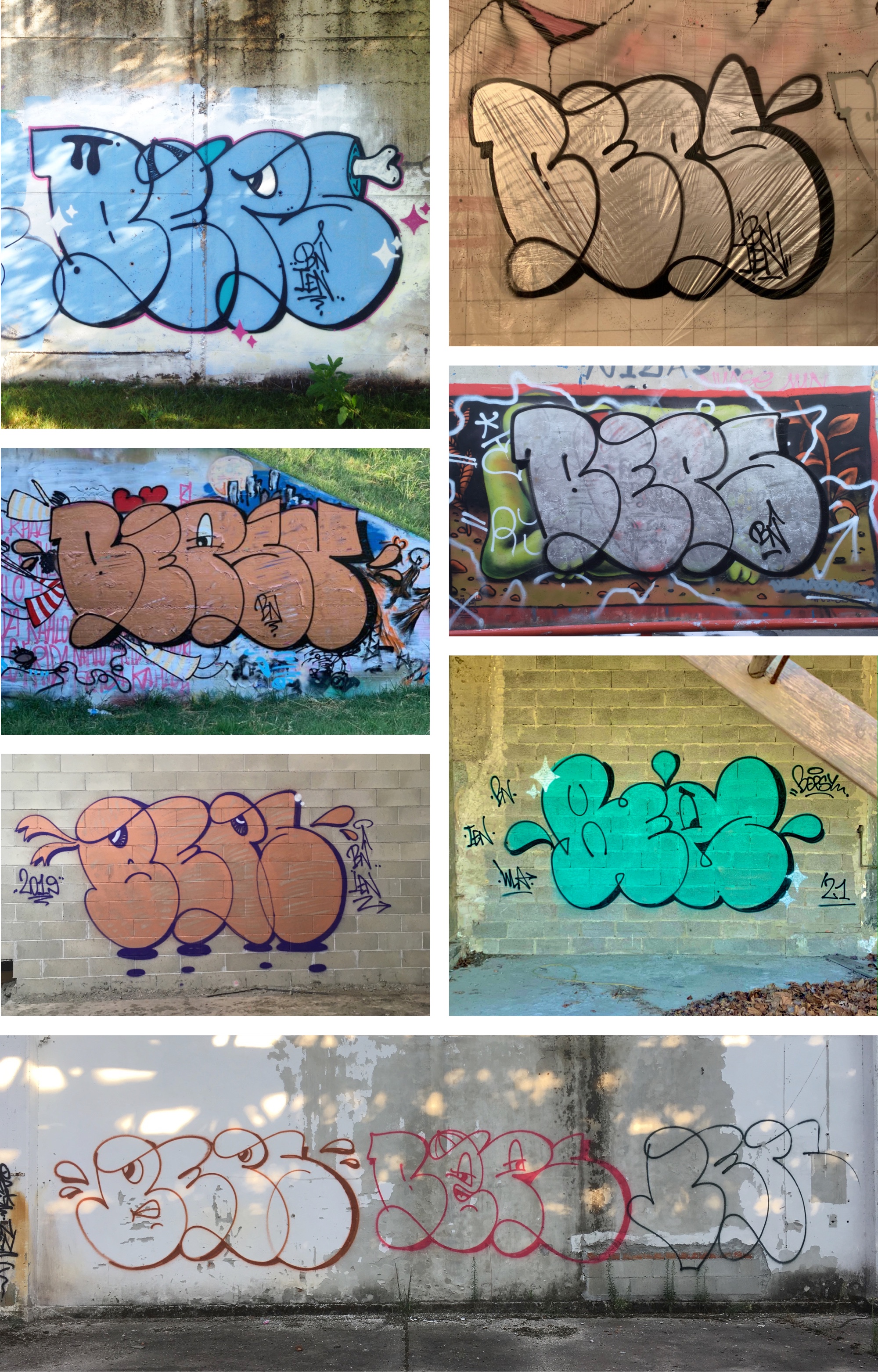 While on a musical level I would tell you only one name: Queensbridge (New York district from which many American MCs come from NaS to Mobb Deep for example ed). 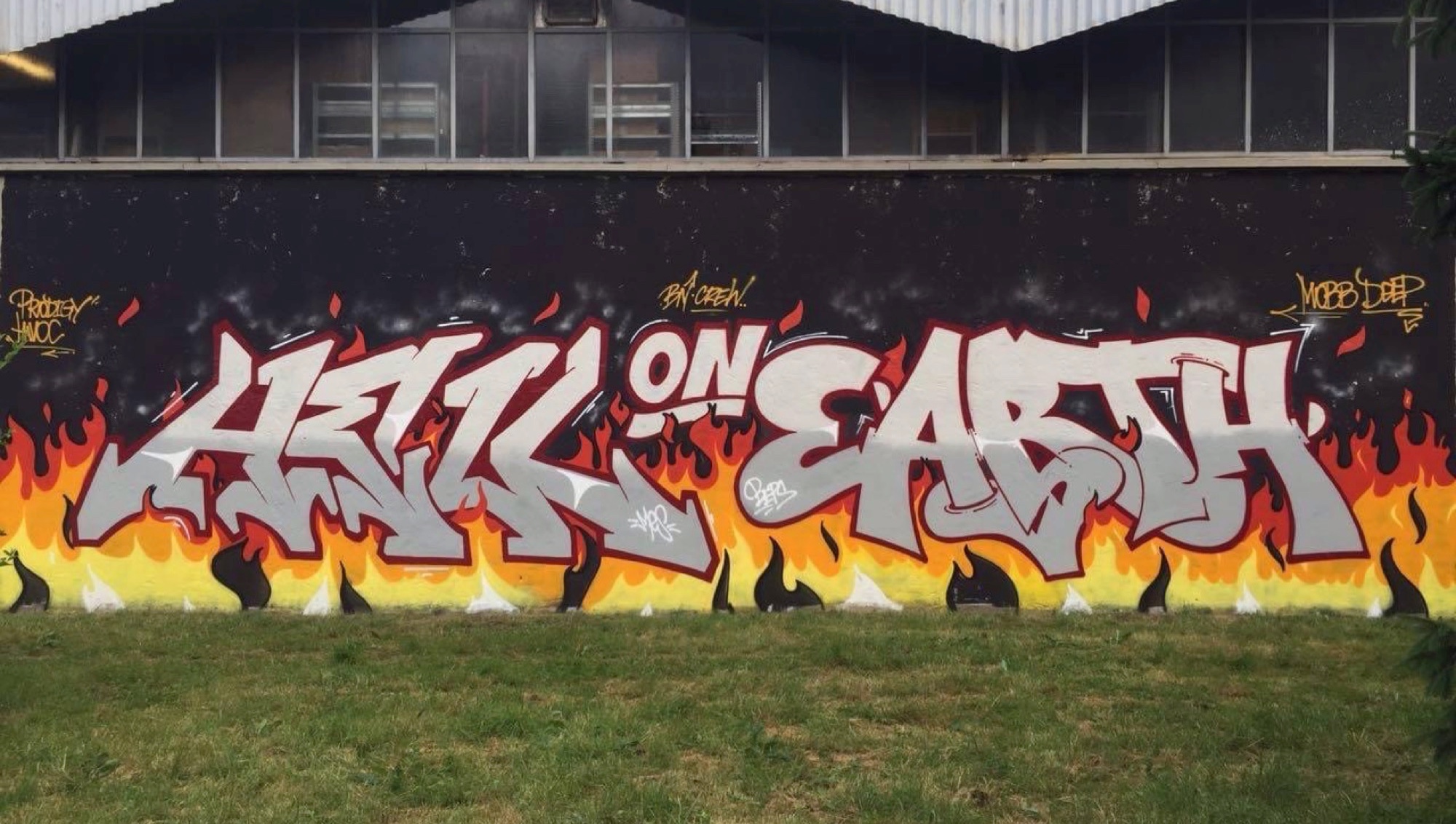 In the past, you also went in yards … How did you feel? What did you like most about these actions?

BEPSY: The period of 1998-2007 was prolific when it comes to metal. Crazy cool. A unique feeling of adrenaline, satisfaction and a good dose of training in any weather. Under the snow and 40 degrees in the shade. I have done at least a hundred panels and about fifteen Metros. Due to inexperience, the photos, reflections or burn rolls are the reasons for twenty of them. Incredible. 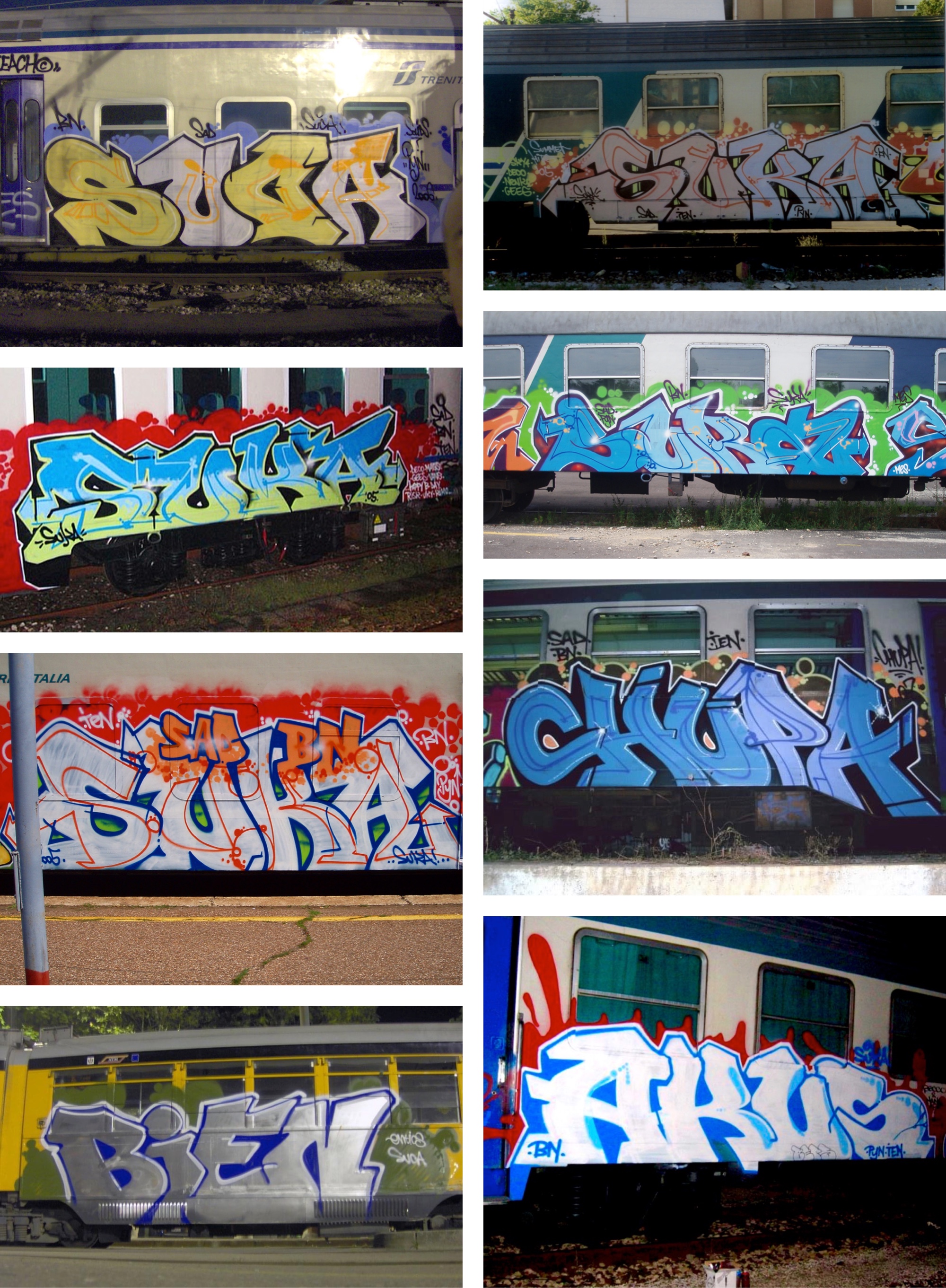 Once with Analini, Clas we changed the tire of my Golf 1800 16 V gray registered in Florence, under the snow and escaping away ( Panel Done ). Wooof. ”

What drives you to choose a wall, a panel or a place rather than another?

BEPSY: “Nowadays, the choice is in one direction, unfortunately, the wall.”

For some time now we have often seen you around, painting and also with the Roman rapper, Noyz Narcos: how did you meet? What is your bond with him and with Propaganda?

BEPSY: “We met Noyz for the first time from the Borderline Store at Via GG Mora in 2012. He gave us a copy of the “ Monster ” CD. Then things led to another, he often came in front of Via Mora; once he came to hear us in 2013 at the Bruttoposse that I was playing with Chaka aka Clas aka Cleppo, then he moved to Milan. The first graffiti together looks like 2015…! 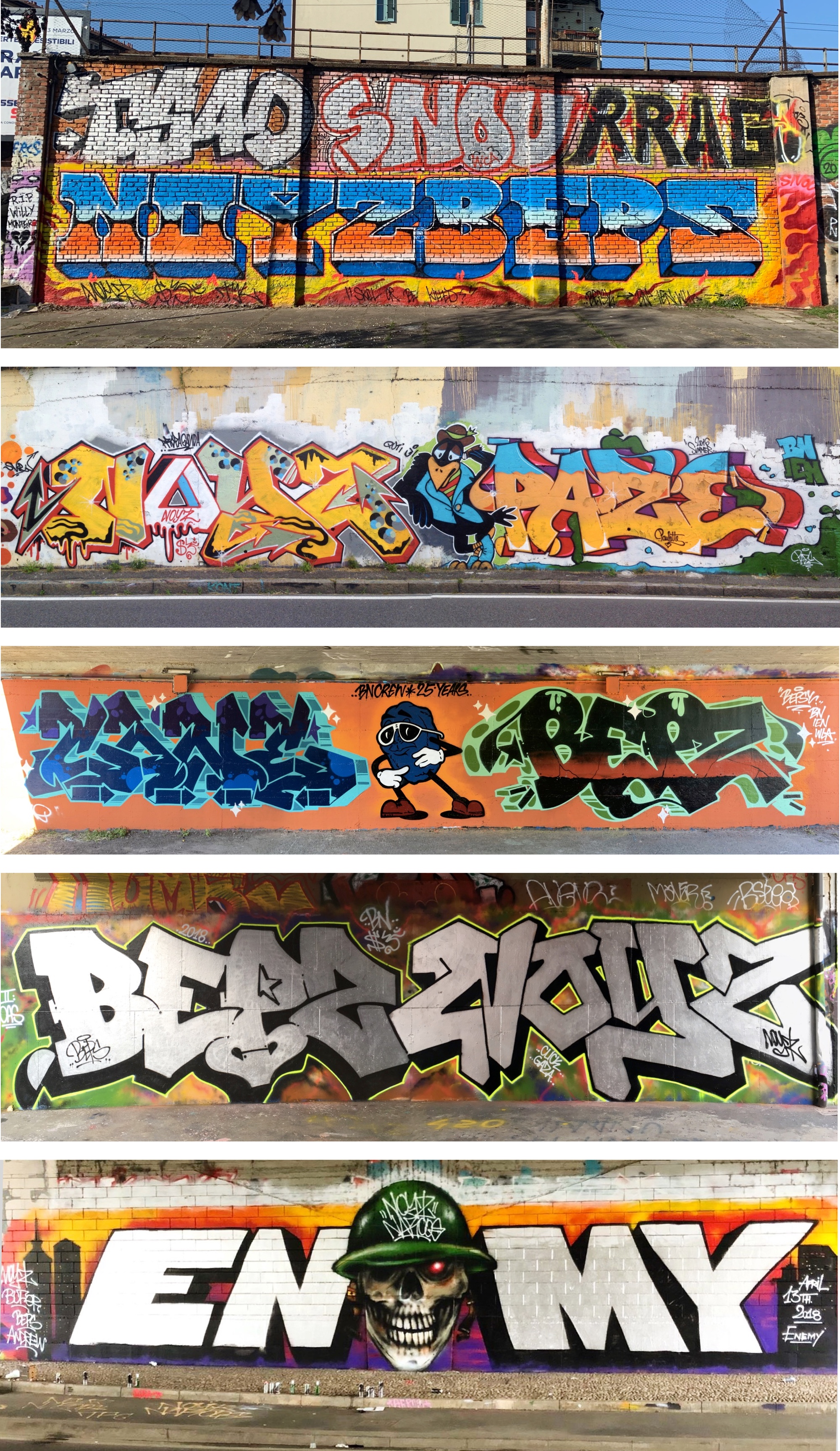 In your opinion, what are the main changes that characterize today the graffiti movement in Milan, compared to the beginning?

BEPSY: “For me, changes are radical almost due to the evolution of social networks from 2008 to today. So the change is directly proportional to the evolution of social networks to date. Myspace style, flickr style…. Up to Tik Tok style. Sympathetic but with little substance. Before it was something else … and before it was another thing. I think…” 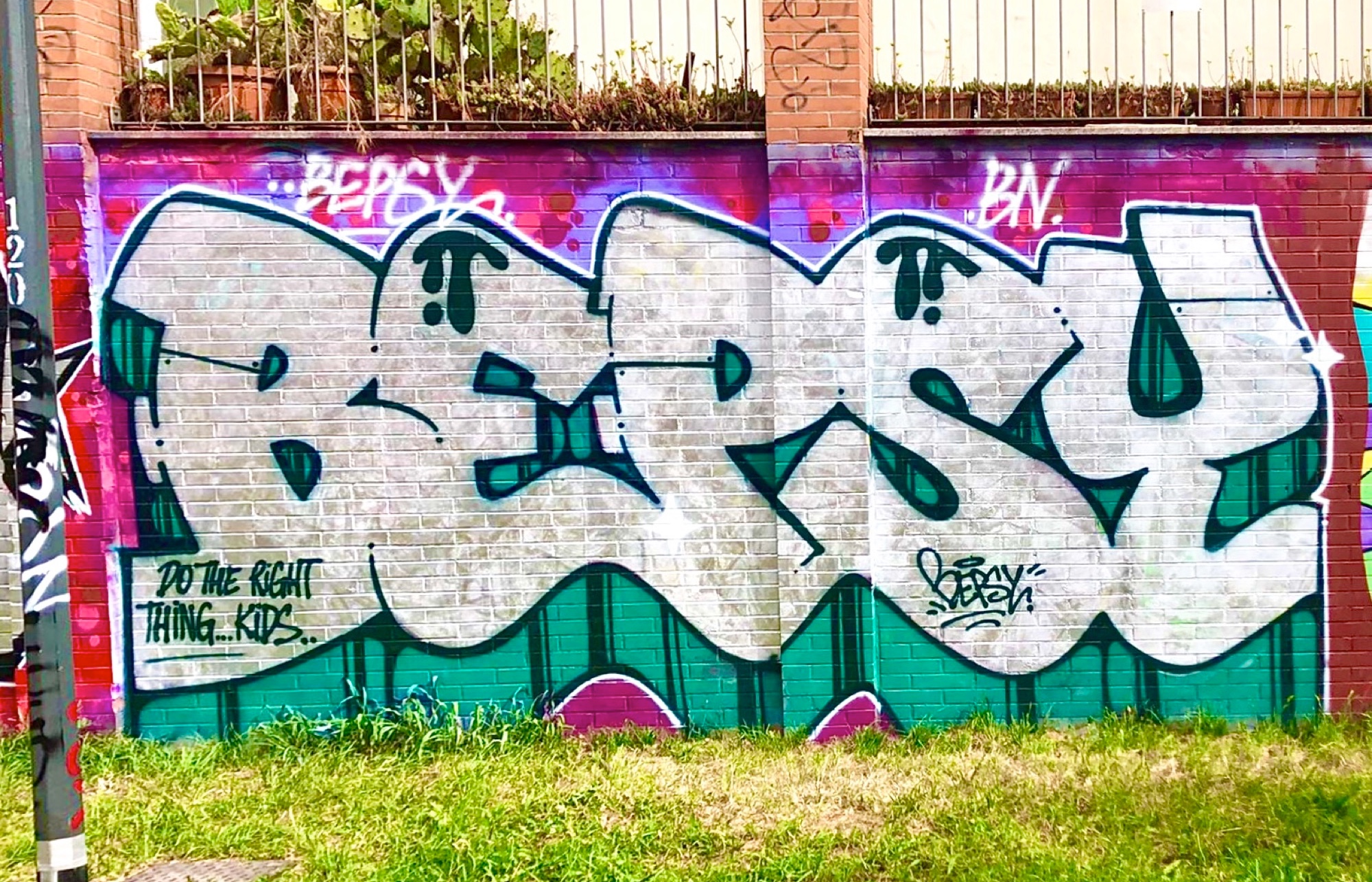 Besides graffiti writing, what are your other great passions?

BEPSY: “In addition to graffiti writing, my passion is absolutely music, reggae / dancehall as well as Rap and then I delight in the kitchen. Talking about cooking, I would challenge a certain ‘’Spra’’ in the kitchen. 🙂 !

Tell us about your latest project “Enter The Wu-Milaan”. The drop on our shop was a success!

BEPSY:I had a dream. The map of Milan during the 18th century, circumscribed in the logo of one of my favorite groups, the Wu-Tang Clan! 👐🏼 So I thought: fuck I do it fits perfectly, the shape is just that!

And informing me more accurately, I discovered Milan was founded in 590 BC. by the Celts. Hence the graphic choice to associate that typography for the writing “Protect Ya Neck Since 590 B.c.”.

I downloaded the files … put on Photoshop and taaac … Fire! Then, amidst suggestions and considerations, I redesigned it, all at 0.1. In total, it must have taken me over 20 hours … so to speak. A big job, but what details !!! 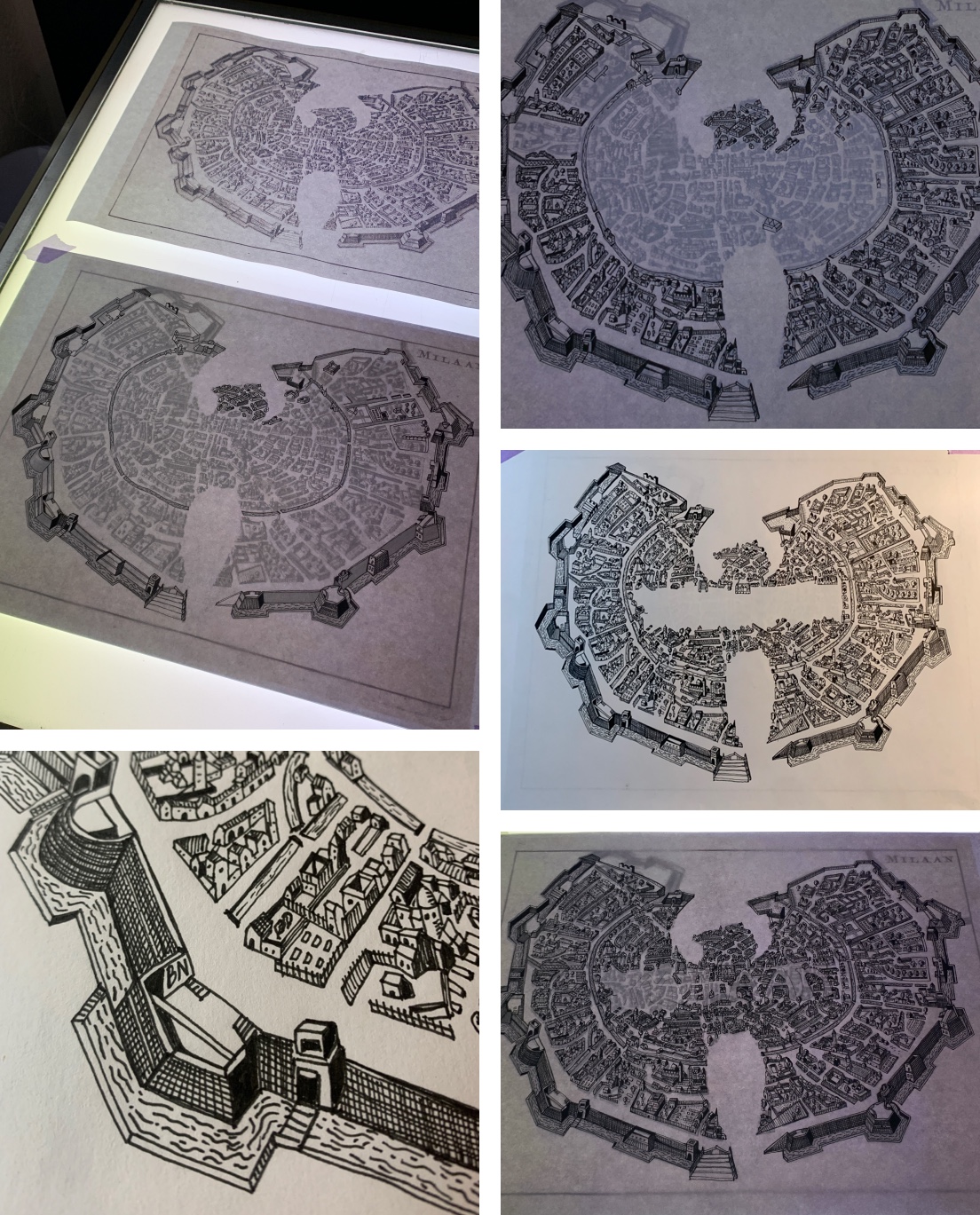 Do I do the printing? Oh yeah numbered 1 to 36.
But are you printing some sweaters too?!?
Do both !!!
And a scarf that says protect your neck no!?! Oh well what a hit! 😉
Stickers oh !!! I recommend…
And stylish packaging, absolutely.
So the fruit of ideas and work can be found in the pack that will be available on the site of my friends of Throwup mag at the price of 50 €.
Only 36 boxes.
Enter the Wu-Milaan 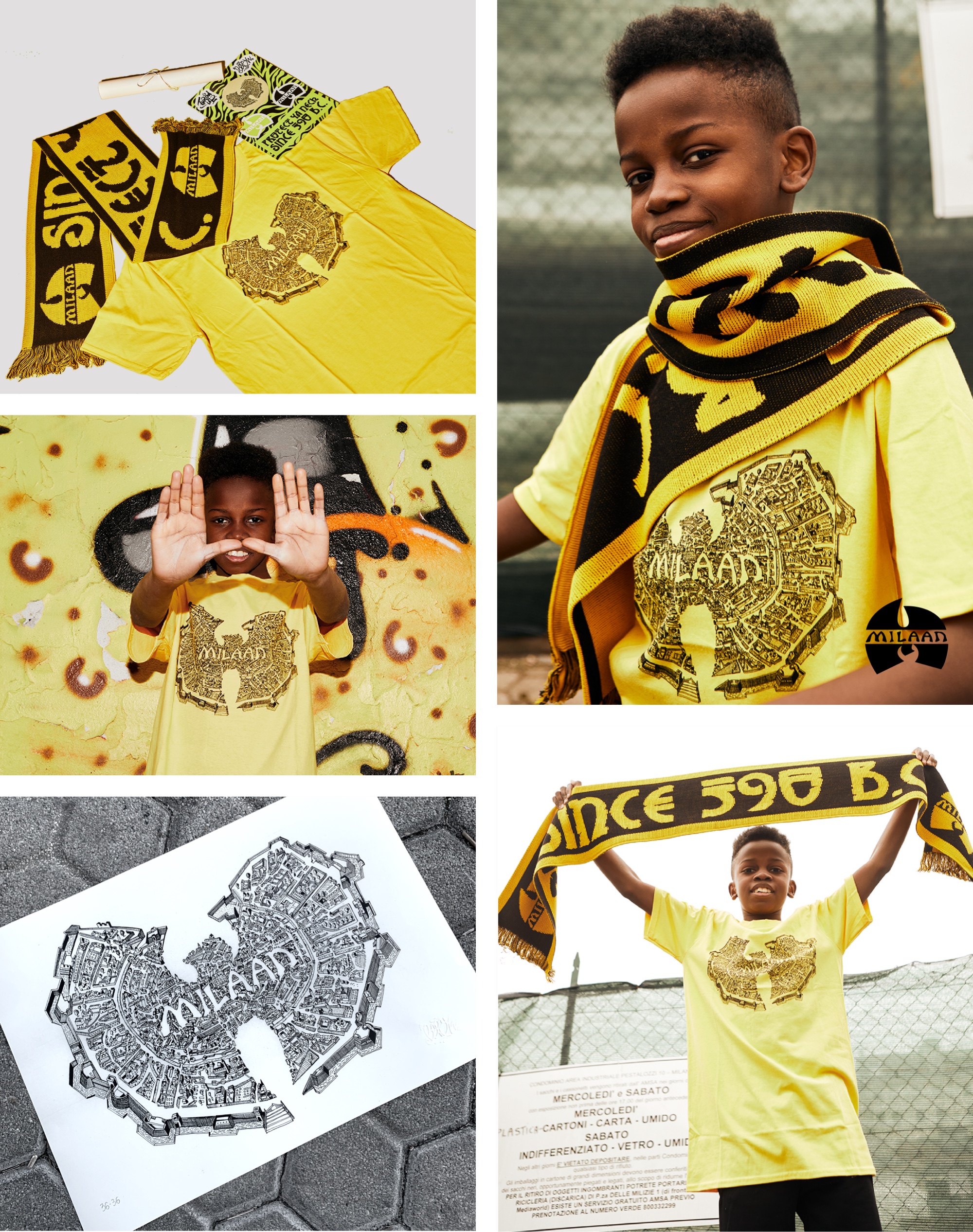 Do you have any other projects in the near future that you want to share with us? Do you want to tell us anything else?

BEPSY: “I have been collaborating with Propaganda Clothing since 2021 as a graphic designer. My artworks have already come out and more will come out. Salmo used one of my Flop d Flop to do his merchandising… 🙂 Now I’m doing something for a friend of mine who has an Italian restaurant in Adelaide. So there will be some nice content to fill, for this fucking 2022!

Lastly, I wanted to tell you a 15 year old story of when we did the Silver Tange Bombs battle against MAD / PS friends.
Oh well, we won (BN / SAD) like 20 to 18. At leas, that’s my version of the facts.

Fundamental. I left it in the end so it’s a great final.” 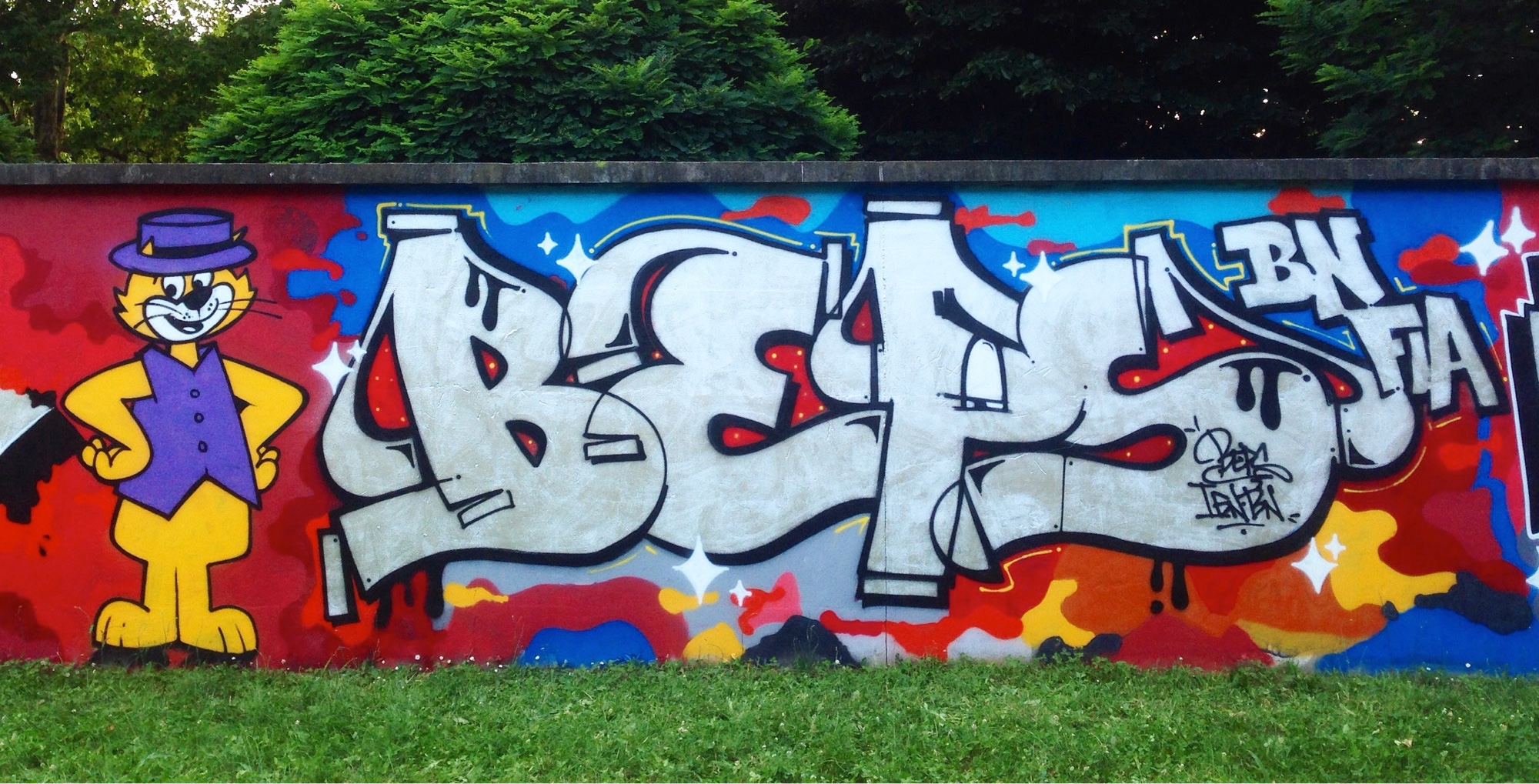