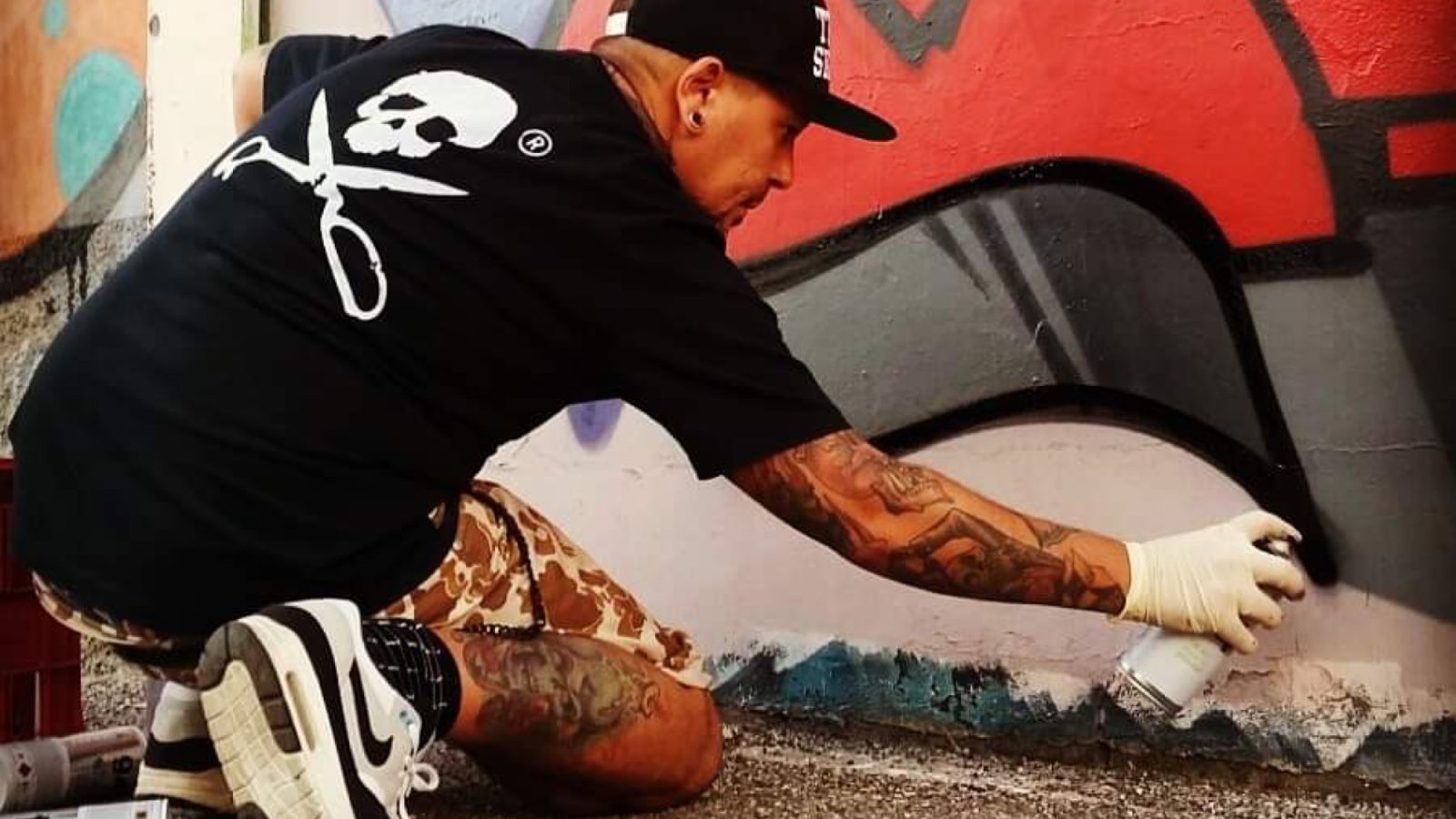 Hi Reeno, it’s a great pleasure to finally ask you some questions. We would like to start by asking you to tell us when and why did you start painting? Where did the name Reeno and your second alias Dosher come from?

Hello .. First of all, it’s my pleasure and thank you for thinking of me. I started painting in ‘94-95 (my first piece with sprays) .. although I drew on paper and I did some signs before, but let’s say that I didn’t have the right company to learn more about this. (I have always drawn since I was a child but one day came into my hands some postcards of the Berlin Wall and I got fascinated by those drawings. Therefore I started copying them and producing things remotely similar ) until I began, between raids and high schools, to know who was doing this with a sense.

I started to go to see various Hall of fame in the neighborhood .. Then, I move further and further away watching new things .. bombing on the metro .. and here I am. As for the name .. Dosher actually comes before Reeno and it was born from my first “serious” tag which was Dock .. but in Milan Dok came out and bombed more than me and respecting this I switched my tag .. first with Doch / Docher but I didn’t like it and after it became Dosher .. that surely could have been just for me .. Instead, years later the name Reeno was born in Caserta out of desire to have another combo of letters and because my name is Rino 😂 and then I gave a name to the period I lived there..

Do you remember where and with whom you made your first wall piece? And the first train?

I did my first serious piece with my first crew precisely in ‘94/95, on a wall of a school. I took the authorization either from the school and from my father. He bought me some shitty sprays, but they were fine and I wrote “Rupe” with rasta colors…

The first train was an abandoned train and we didn’t even finish it because a madman ran after us with a crowbar so I did another one in in a random Milano yard… At that time where you might easily find other writers inside. Luckily I moved to Caserta and the story changed for the better as it was just us painting!

How was the graffiti scene in Milan at the time and how has it changed today? How did it change your approach to this movement over the years?

Even if I missed the period between ’97 and 2003, because I moved Caserta, is Milano that initiated me into writing. The Milanese scene of the second half of the 90s was very fascinating. Milan gave you a thousand inputs, each of the already established crews had their own style and areas and we who had arrived later, just had to learn from them and get influenced in the right way. We were bombarded with different styles in the city, in the Hall of Fames, on the subway and in the stations. Today, in my opinion, it has lost something in terms of personality, although there are many really strong writers. But what the fuck, now there is Instagram… we are full of strong writers.. But there is no longer the magic of seeing the pieces live which for me remains a very cool and fundamental thing. Now I think more about the photo than the piece, while once I didn’t even take pictures. And only now I realize that maybe I should have, since my memory leaves me more and more. 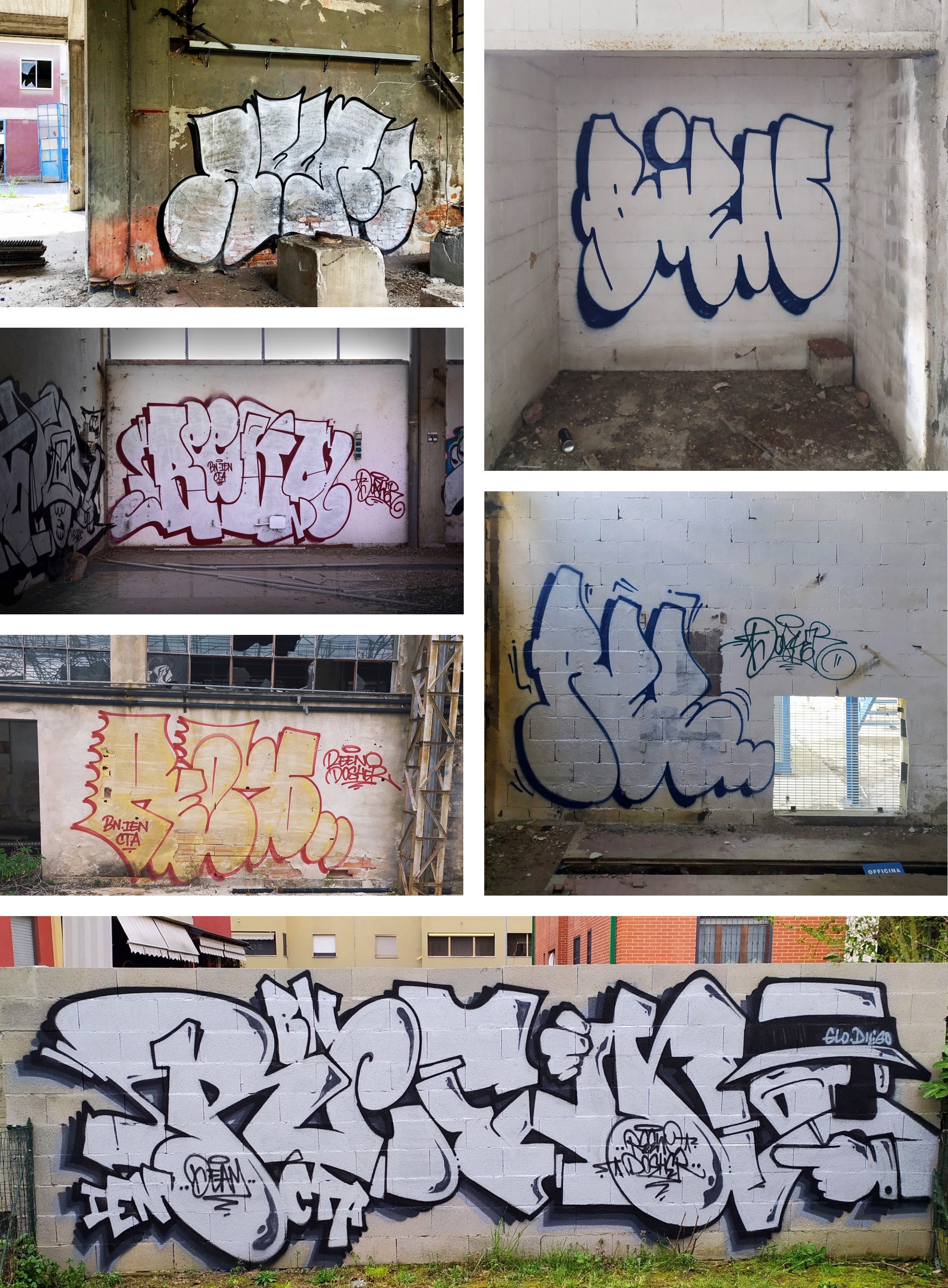 You are one of the founders of the historic BN crew. How was it born? What does the name of the crew symbolize? How and when did you choose it? After 25 years, who are its members?

The BN crew was born in ’96 in Baggio (a suburb of Milan) with Kor (Mes) … we came from different situations and we started drawing together because we were from the same area … until we formed our own crew by combining part of those we already had and by recruiting people who more or less had the same path as ours..evolving over the years..expanding the crew with graff writers not only from Milan but with the ones venerated when we were child…as sky4-cone-oneman ..and it was never just for graffiti writing but also for affinity between the various elements. It was born as “late night kids” adding also other meanings .. Baggio nation or boogie nights etc etc .. in total, we are more or less about twenty .. not really all active but most of them yes and I won’t name them before I do bullshit.

How would you define your style and how has it evolved over the years?

I don’t really know how to define my style. It definitely comes from wildstyle, although I like to think of it more as a mental approach. I think living in two different cities has influenced me a lot. Milan is where everything was born and Caserta consecrated me by evolving my way of writing…

I simplified a lot compared to the beginning which was a mass of arrows, loops etc and I gave a lot of importance to the colors making pieces really full of stuff .. Then over the years, when I didn’t like what I was doing, I used to take breaks. Afterwards, I started to give more importance to the letters and lately even colors bored me .. I want to see only letters interacting with each other .. so I try to keep it as simple as possible, always keeping a connection and a classic base .. Basically, first of all, I like the structure.. The rest is optional.

What do you think are the greatest lessons learned from graffiti writing?

This is difficult .. it will be a bit trivial but one of the lessons, first of all, is to respect people .. I have surely learned that having such a passion leads you to be able to live in any place and make the most of it; that from the suburbs you can become a citizen of the world .. but above all, that I am a different person from the others .. with a head and a name to write until the end. 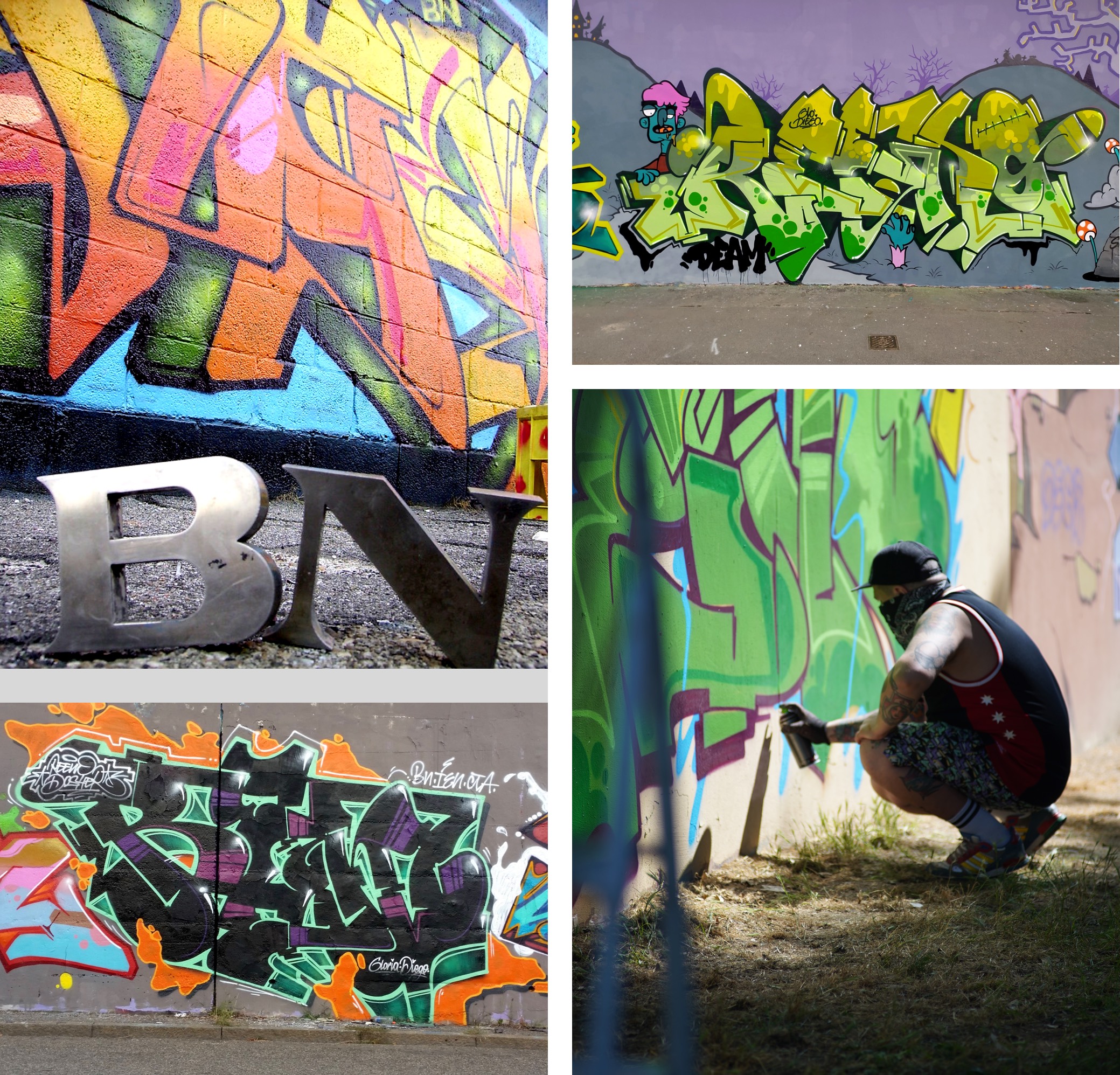 Who are the artists who have inspired you the most through your career? Nowadays, where do you get inspiration?

Well … there aren’t any in particular … as a kid I used to see the CKC crew a lot because I liked almost everything of their works … from tags to Bubble … illegal pieces … pieces in the Hall of fame … let’s say that was my type of graffiti..but as said before..Milan was really the house of style and therefore it was a continuous inspiration..once I got off in Caserta,(Naples) apart from the CTAs and we had no internet at all, so we looked at the fanzines and I started to like a lot of linear things than at the time they could have been Swiss like TWS crew and Germans like SUK crew .. I need to say that I have always appreciated everything that was recognizable and stylish .. whether I liked it or not .. Today, instead of just instagram, whatever you want or don’t is a continuous inspiration … and without going far I am inspired a lot by my crew brothers. Each of them have different and recognizable styles, and i get inspired a lot! By the way I always prefer classic pieces full of substance and with few disguises… 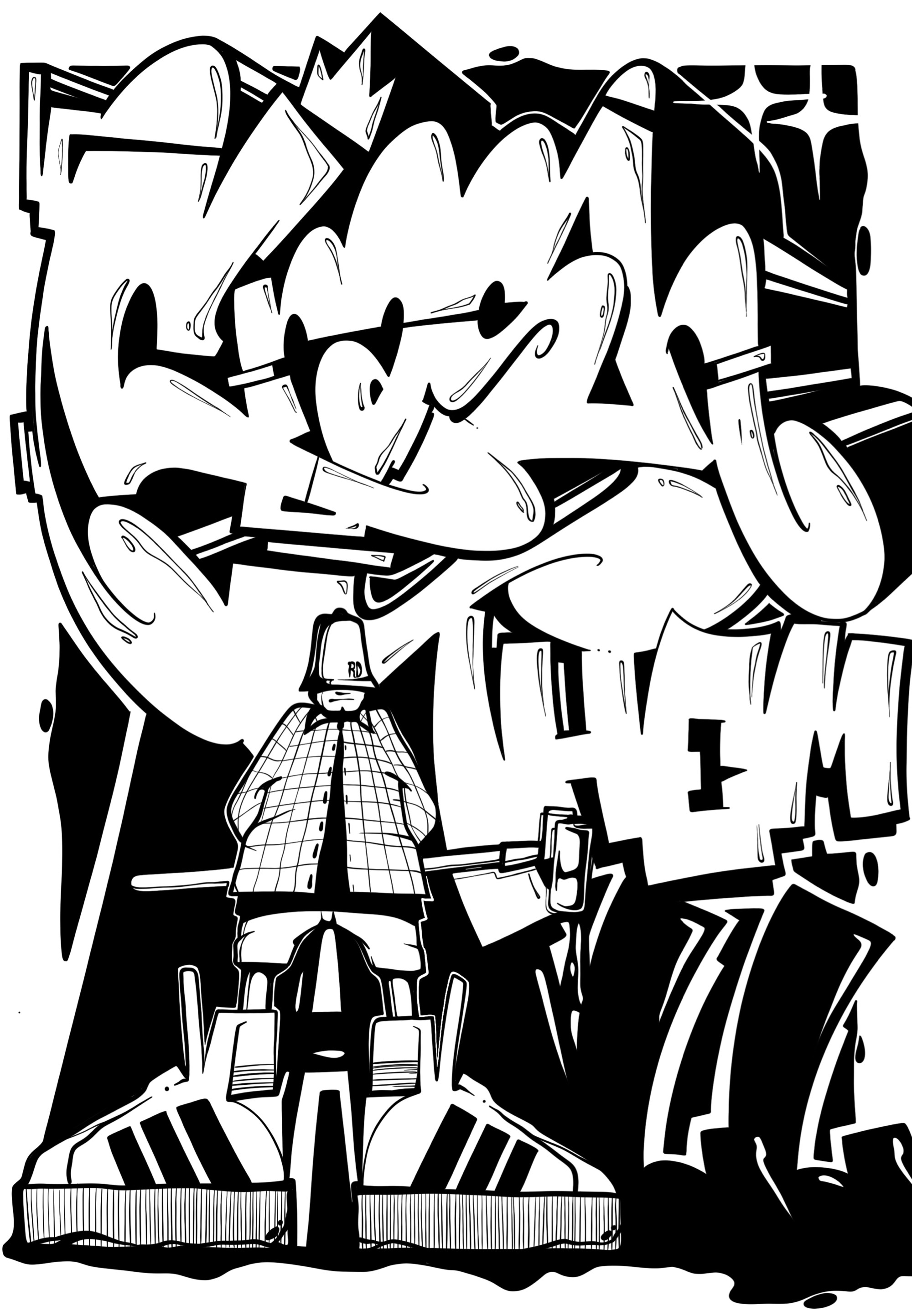 Have you painted abroad? If yes, which are the ‘’deep’’ experiences that you remember with pleasure?

Actually abroad, I’ve only painted many times in Valencia.. we have a crew brother and other local graffiti writers with whom we created a good connection in the last 20 years .. Now I also have family members there and as soon as I can I go there and I always try to find the time to do a few pieces.

Would you like to add something or tell us about some project in pipeline?

I don’t have specific projects .. But I am in a period of good inspiration and I want to exploit it as much as possible because over the years I have often been fickle and it is something I regret a lot .. and now I want to recover and look totally ahead ..