Peace God. Thanks for your time, it’s really appreciated as We’ve been fans of your music and vision ever since we discovered you with the “With All Due Respect” (2017) album. In our opinion, one of your strengths is your lyrical ability to vividly describe your life and how you’ve leveled up from a complicated past, with honesty and credibility, and you proved it once again with your last album, “S.O.U.L”. Can you tell us something more about your background and origins? When and how did you or your family arrive in Canada? What was it like for you growing up in Toronto and Is there a large community from Latin America in your city?

ASUN EASTWOOD: “I was born in Belize City, Belize and came to Toronto, Canada at 2 years old. My mom happened to be born in Vancouver, Canada, because her dad was on a business trip with her mom, while she was pregnant with my mother. Basically she had citizenship although she was only in Canada for 2 weeks. She got pregnant with me as a teenager and didn’t think Belize had the opportunities she desired so being a Canadian citizen she just packed up and left with me. Barely any money, some education, all heart and hustle”.

“Belize is a unique place, although it’s located in Central America it is the only place in that location that speaks English as its first language. We have more similarities to Jamaica than we do Guatemala. With that being said moving to Toronto in the mid 80’s was a natural transition. A lot of immigrants from the West Indies were doing the same so the culture blended. I never felt outta place here”.

Your last project “S.O.U.L” – “The Science Of Understanding Life” (produced by Finn) might be a sort of testament of your vision and poetics as it is maybe your most personal album in our opinion. Your rhymes, in fact, are for grown men and inspirational, as they stand for real principles and not for gimmicks or exaggerated bullishit. How was the album born and how long did it take you to conceive its lyrics? Where did your inspiration come from? What does it represent for you and why?

ASUN EASTWOOD: “The pandemic! Blame the pandemic! Hahaha. Nah, for real tho this is my ventilation system. Writing was, is and will always be something I do. The inspiration was me being at home more often able to reflect on myself and the state of affairs in the world. I just put it to paper”.

“Finn hit me up around August 2020 with stupid instrumentation. He would send me 3 beats and I’d send him 3 back the next day. We did this once or twice a week for a couple months. That being said we got a couple more projects ready to give y’all. We knew this album was gunna be our best work to date”.

We both knew we stepped our games up, so in essence this represents my true arrival, in my opinion. People that are rocking wit me now will say “The Soul album is when I knew Ace was up next!”

This work is fully produced by Finn: can you talk about your connection with him and about the Gold Era label thing?

ASUN EASTWOOD: “I met Finn, Sibbs and Slang (the GoldEra Collective) in 2017 through Daniel Son, we been rocking since. They live in the west end of Toronto and I live in the east. This shit was supposed to happen, it’s organic!”

S.O.U.L it’s a very well executed album: who has orchestrated it, in its sequence and featurings? Do you have any favourite song or verse on it? Which one and why?

ASUN EASTWOOD: “All praises to Finn! He did all the sequencing, extra instrumentation, mixing, mastering etc. (I’m spoiled). Getting features was something we both spoke about and we both came to an agreement on who we chose. We both get credit on that

My favourite song and verse has to be ‘Float Away’ that’s the only song on the album not written during the pandemic. I wrote it on my honeymoon in Belize and recorded it on IG live while I was sitting by the sea. When we started doing this album Finn told me to go record that verse for real cause he loved it. When I went to do that I added a second verse and it felt special. That was the song that kind’ve set the direction we wanted to go in”.

Earlier this year you collaborated for another full length album, entitled “98 Miles£ with the dope MC from Rochester (NY), M.A.V of the DaCloth crew: what is your link with the American underground scene and, particularly, with the one from Upstate New York?

ASUN EASTWOOD: “Our link up was something that was organic. My whole journey with this music business has been organic. That’s the theme. Finn reached out to MAV and Rigz around the time I met him so I was aware of them early”.

Daniel Son was already moving in this game when I linked with him he was starting to do shows in the tristate area. I came for some of those trips, hopped on some of those stages and shook hands wit a lot of these artists on top of the underground now. All organic!

Talkin about the “98 miles” project…We think that the cover artwork is crazy dope, who did it? How did the idea for this album come about?

ASUN EASTWOOD: “The amazing artwork was done by the talented Chris B Murray. This album was also organic. MAV and myself have similar roles within our own crews and our content line up incredibly, so it was an easy decision and an easy process.

“Sibbs had been sending us shit and building with us individually and he was instrumental (pun intended) to seeing the vision. He was hearing the content from the both of us and he hadn’t done a full length production project before this, so we felt it was only right”. 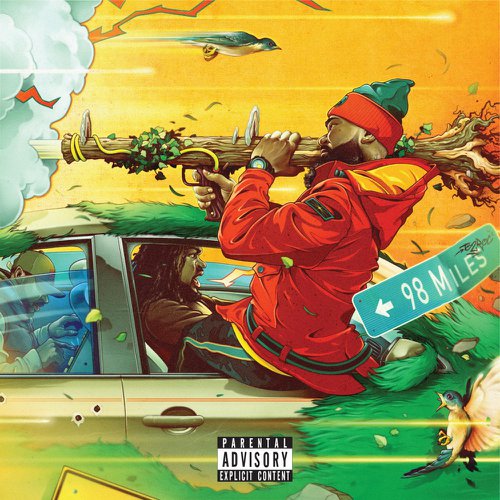 When and how did your passion for Hip Hop start? What were your first steps in it ? Why and when did you start to take your rap career more professionally?

ASUN EASTWOOD: “I always loved Hip Hop. I was born in 83 so hiphop grew with me. I lived in the places, with the people that hiphop resonates with. My community was all Hip-Hop.

Freestyling as a kid with the homies was something we did put here. We saw the older cats doing it and we replicated it. I didn’t start writing til I was 13 (in secret) I recorded my first joint at 17 but I didn’t have real rap dreams like my brother Chopz did (RIP) I had hoop dreams. I was Chopz right hand though, as we got older I strayed from music I just was into getting to the money. When he passed in 2014 I had no thought of music. It ended up chasing me.

In 2016 I got back in the booth organically and all my years of networking led to opportunities that made me think it was possible. When I get that feeling I just put my head down and work, I plant seeds, now I see the tree starting to grow and bare fruit.

Where does your rap name come from?

ASUN EASTWOOD: “My parents nicknamed me Asun as a kid. Something that stuck. I had a glow apparently. I added the Eastwood on because Clint is that nigga! Cowboy style! And I’m from the East. It made sense to me”.

Among your incredibly dope catalog, what are your favourite albums and why?

ASUN EASTWOOD: “They all are my favourite. They represent different times of my life and it shows my growth every time I put a project out”.

What’s your approach when you come to take inspiration for writing down your lyrics? What keeps you focused on working this hard and being so prolific with some quality content?

ASUN EASTWOOD: “I just put the beat on and it comes to me. Nothing crazy. Once I get those first 2 bars I’m running. My upbringing. My mom and pops taught me to never half ass anything and if you say you’re gunna do something, do it!”

Lately, the Canadian underground scene looks in great shape, almost like the one from U.S.. In fact there are you, Daniel Son, Finn, Raz Fresco, Nicholas Craven, Vago, Falcon Outlaw, Saipher Soze and others dope emcees and producers who are putting this scene on the map all over the world… What do you think of this movement? How do you think it became so consistent? And in your opinion how can you and your peers reach an even higher level and recognition?

I think the consistency comes from the comradery and from competition. We keep each other sharp and we see a door that’s starting to open so if we all go together we can push it open easier. As long as we don’t stop working on our craft and our business ethics the sky’s the limit.

Are you already working on something else? What can we expect next? And is there something coming instead that you think we could never expect?

ASUN EASTWOOD: “I have 5 albums ready to go. The next one is due end of July called “The Complex” it’s fully produced by Wavy Da Ghawd. He’s a dope producer from NYC. Lock in cause this is gunna have a lot of summer energy.”

“Lots coming that you couldn’t expect with legendary artist that you love. That’s all I’ll say for now. TOMA!”