Peace man. Thanks for your time and availability in answering our questions! We really appreciate it. We would like to start asking you something about your personal story and background as you always show great pride in your Puerto Rican heritage: Can you tell a few more about you and your family story? What New York borough did you grow up in and how was growing up as a Puerto Rican in New York, from your point of view?

UFO FEV: “To answer your first question, I was born and raised in El Barrio, Eastside of Harlem, NYC. My family background starts in Puerto Rico. My grandparents from both sides were born in P.R. & came here in the 50’s and settled in East Harlem.

My neighborhood is called El Barrio (The District), it is primarily a Latino & Afro-American neighborhood and that was just how it was. This was when the neighborhood had a sense of community and everyone kept things together”.

In the last few years you have been working hard with your music, but how did your passion for Hip-Hop come about  when you were younger? When and why did you start spitting your first rhymes?

UFO FEV: “Thank you, I didn’t think Hip-Hop was a culture back then. The music was always, since my inception, around me.

Outside of my building, the drug dealers would have music playing while they hustled, or the basketball court would have someone with a boombox there playing music. The music would be coming from apartments, some people would put their speakers on the windowsill, you would always hear this kind of music.

All of this is both the reason for my passion and why I started kicking rhymes, it was damn near impossible to be a rapper back then. I was 15 when I kicked my first raps outside”.

Where does the name Ufo Fev come from?

UFO FEV: “The name Fev, which is short for Fever, was given to me by Black Rob (R.I.P.) He’s known me all my life and one day he told me I was hot, I had a fever. I have kept it ever since. UFO comes from knowledge of selff”.

On 6/11 you released your new project called “Magnum Opus”. What can you tell us about this album? Which producers and other Mc’s have you collaborated with? How does this album of yours differ from the projects you have already released in previous months?

UFO FEV: “Magnum Opus, is entirely produced by a new up & coming producer by the name of Ster, out of Brooklyn. I’ve known Ster personally for almost 10 years now and we have been working on this project since 2017.

Many different versions of this album, but we finally have the right sound. We have on some dope emcee’s on this album, including my partner-in-rhyme Red Inf, Vic Spencer, DV ALIAS KRHYST & Gorilla Nems. All of these fellas are on “Unapologetic“, which is how we are closing it out. Stong!

ALL you have to do is press play & you’ll hear the difference automatically”.

You have recently shared some pics on instagram with the legendary Fat Joe, a Hip-Hop and Bronx icon with a Puerto Rican background as you: where were you that day and what did he tell you? How did you link up? Did he give you any advice or what is the greatest lesson you learned from being close to him?

UFO FEV: “Joe (Fat Joe) & I were at the United Hip-Hop Museum Groundbreaking ceremony up in The Bronx, NYC.

I’ve been his “apprentice” or under-study so to speak ever since .

We’ve released records like (“Wraith” feat Kent Jones. “Fentanyl Flow“). He’s also on The Ghost Of Albizu. He’s always giving me life lessons or advice and he’s a man I am grateful for in my life.

I could write a small book of jewels I’ve collected from Joe Crack.”

Just thinking of Big Pun or Fat Joe, Puerto Rico has always played a huge role in the New York Hip-Hop scene: why do you think the community of Puerto RIco had this great influence on Hip-Hop, more than other minorities? Who are your favorite rappers of all time with Puertorican origins? And among those that have come out more recently?

UFO FEV: “Well, in New York City the latin community is a majority as opposed to other cities throughout the U.S. Latino’s came to the mainland in the 50’s after the revolution and we were in the ghetto’s.

When this music was played in the park for the first time, there were brown and black people. That was the birth, so it’s not Puerto Ricans influencing Hip-Hop, it’s Hip-Hop influencing Puerto Rican’s…… from the beginning.

My favorite rappers of all time with PR origins, would be Big Pun, Fat Joe, Noreaga, Jim Jones… more recently I like Eto, Nems, Spanish Ran, Termanology, CJ, J.I the Prince of NY.

Anybody doing their thing and representing the bori’s is cool w me”.

A project of yours that we loved a lot last year was the one with the producer Big Ghost, entitled “The Ghost Of Albizu”: how did this collaboration come about? What does the title mean? And as for the album artwork, who made it?

UFO FEV: “This collaboration happened through Instagram.
Someone commented that we should do a project called The Ghost Of Albizu, Ghost liked the idea and sent me the music.

The title is us paying homage to Don Pedro Albizu Campos, who was an attorney and an activist who was incarcerated for leading the Puerto Rican Revolution.

Both the artwork & music were done by The Big Ghost himself.” 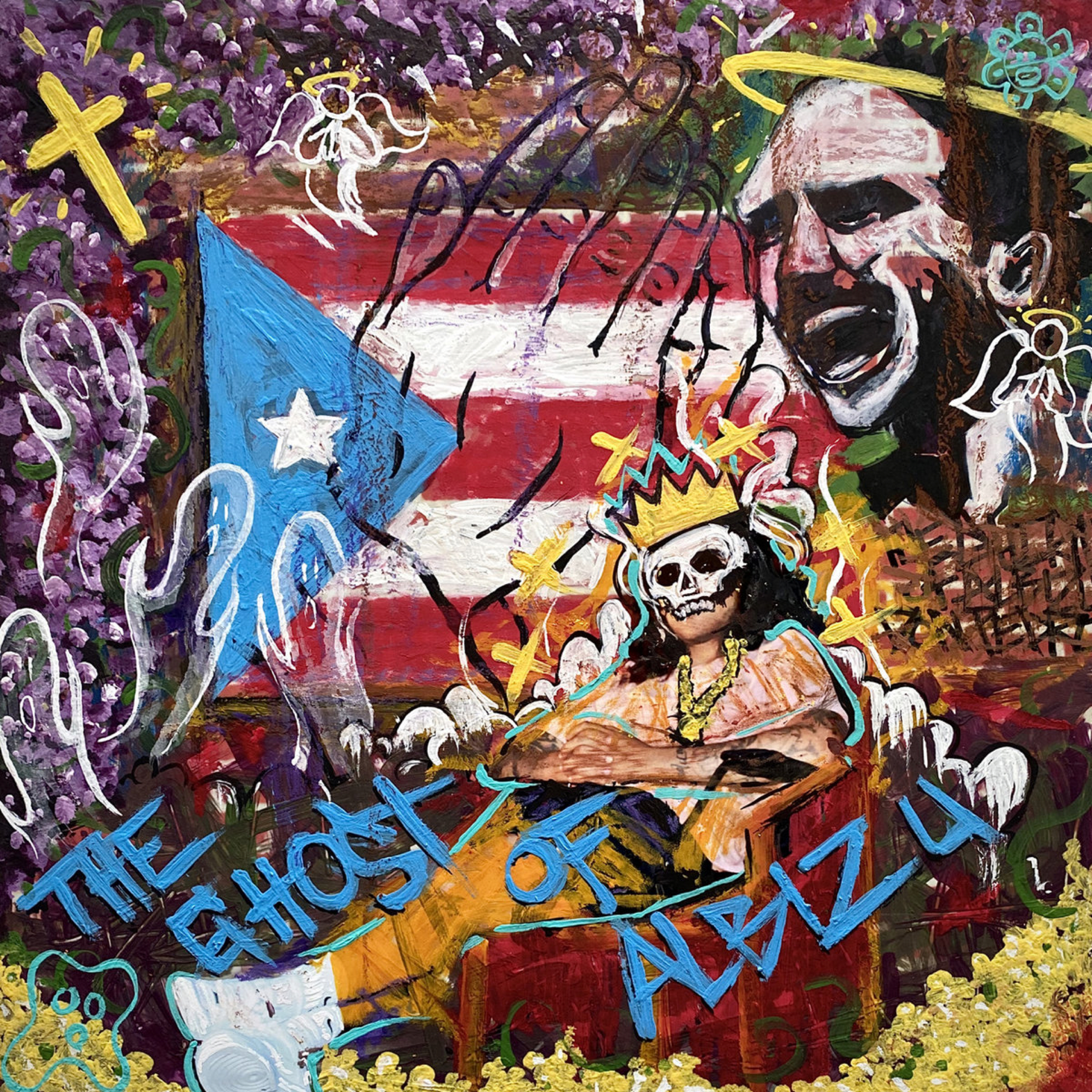 What are your other most defining projects, in your opinion? And what is the album you feel that you are most personally attached to? Why?

UFO FEV: “I can’t answer this yet because I’m still working, lol. I don’t listen to my music once it comes out because I am always attached, & I love them all”.

Do you have any connection with the graffiti or the street art scene in New York? Do you know any artists to keep an eye on?

UFO FEV: “My favorite graffiti artist in NYC right now is PON. I love the homie ABSTRK (@abstrk) although he’s from Miami, he’s one of my personal favorites”.

If you had to recommend three books you read, which ones would you suggest and why?

UFO FEV: “The Alchemist” (Coelho) – because it is a guide to finding yourself if you’re lost. “The Old Man & The Sea” (Hemingway) – because this book will teach you patience. “Shoe Dog The Autobiography of Phil Knight” – because you need to understand how a billionaire thinks and where he came from

Are you already working on any other albums or projects? What can we expect from the 2021 Ufo Fev?

UFO FEV: “Much more albums. Much more music….
Follow me and my music and just enjoy the ride!
@UfoFev. Thank You!!!”