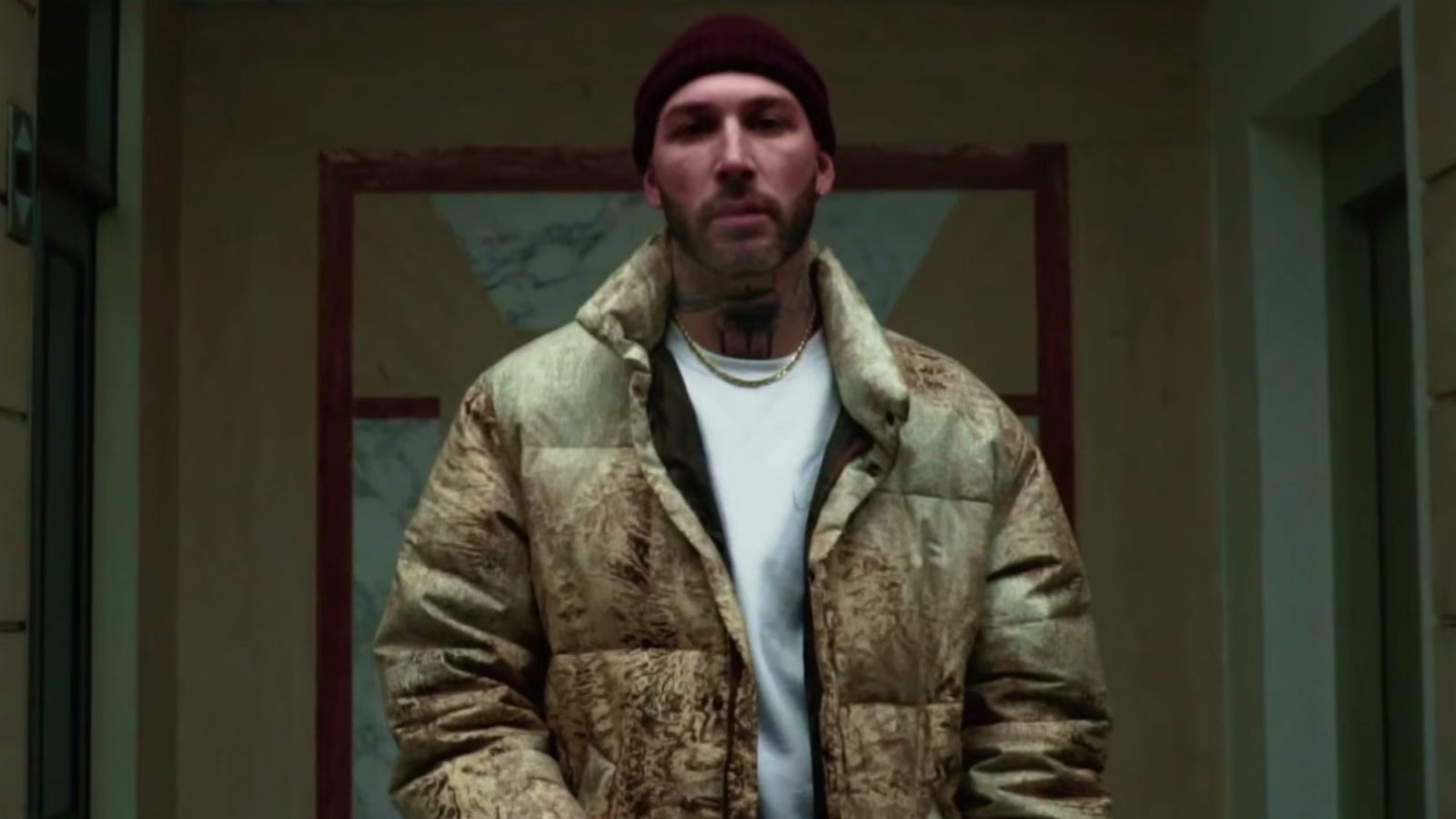 Peace Creep Giuliano. First of all, we thank you for your time and willingness to answer some of our questions. In recent years you have been making yourself noticed with projects and works of great quality and personality, and you have become, in our opinion, one of the most important artists of the Italian underground Hip-Hop scene. However, we are sure that your musical career has much more deep roots and your artistic path started years ago…

Can you tell us how you approached rap and Hip-Hop culture? And what were your first steps in the Italian scene and your first musical projects?

CREEP GIULIANO: “Hi guys, thank you for contacting me. I approached the world of Hip-Hop thanks to the people I frequented. I started rap at the age of 15 after I started writing my first lyrics, I wanted to tell myself and I continue to do so. I certainly experienced the Hip-Hop culture at 360 °, in fact, I was a street jam guy but also a club one. Then I had the opportunity to go to America several times where you can breathe and absorb the style, attitude and roots of rap culture up close.”

We remember a few rappers that have “put on the map” the city of Florence among the Italian scene, as you are doing. You’re also telling it from a different perspective and reality, compared to the stereotypes of the tourist. An example is your “Welcome To Florence” album. Can you tell us about the relationship you have with your city and its streets? And how was the 2018 album in question born?

CREEP GIULIANO: “Welcome 2 Florence” was born when I moved to Florence. That EP was an homage to the city I’ve always loved. My story, however, is divided between two cities, Prato has always been a great inspiration for me, mainly because I grew up there, but friendships and passions have brought me to Florence”.

It could be just our impression..But why Florence, in your opinion, has never brought “big” names to the Italian Hip-Hop scene, compared to other big cities like Milan, Turin, Naples, Genoa, Palermo etc and what is it “State” of Hip-Hop culture in Florence? Can you indicate some names of rappers and producers from Florence that you think deserve more space?

CREEP GIULIANO: “Unfortunately Florence doesn’t have much personality. Perhaps the only way for us to take our space is to have our own artistic identity. I think some Florentine artists have tried to differentiate themselves in their own way, but the city itself doesn’t offer many possibilities. Certainly things are improving compared to before, the problem is that everyone is doing theirs. There is no unity and only unity is strength.

As for names to mention, I actually don’t know because those who deserve the most, move abroad or in any case try to collaborate with people from outside, as I am doing. After all, with the opportunities that exist today thanks to social networks it would be stupid to be stuck in your own city, even if it would be wonderful to be able to bring Florence to the level of the other cities you have mentioned “.

In recent years you seem particularly inspired and you are releasing many projects, but above all it seems to us that you have found a dimension congenial to you, thanks to which you have developed a unique and original identity for your music. A demonstration of this is your latest album “Alzati e Cammina” (Get Up And Walk), along with the producer J.O.D with whom you had already collaborated in 2019 for “Cammina sull’Acqua” (Walk on Water). How did these two albums with J.O.D come about? What is the common thread between these two projects and the meaning of their titles? Can you also tell us about the collaborations within “Alzati e Cammina”,  as Montenero or New York’s MC Smoovth?

CREEP GIULIANO: “J.O.D and I met thanks to Ceasar and we started working immediately on the first project which is “La Moltiplicazione dei Pani e dei Pesci” (The Multiplication of Bread and Pisces). For me this was the album of my artistic rebirth, especially thanks to its beats that inspired me like never before.

The other two albums (“Cammina sull’Acqua” e “Alzati e Cammina”) were the consequence of the wonderful work we had done in the first one, it was inevitable to continue working together, given the great alchemy created right from the scratch. The titles of the 3 albums, of course, are inspired by miracles and each is well connected to a period of my life.

The first title (“La Moltiplicazione dei Pani e dei Pesci”) was chosen because I was in a period of total growth, from the birth of my son to the purchase of my first home and many other good news that were arriving in my life. As I wrote the tracks and recorded everything multiplied: my commitment, contacts in other cities, my skill, in practice, a natural flow of things. I knew I was finally taking my space.

My second album (“Cammina sull’Acqua”) was a clear message for me and for others not to be afraid, a clear way of saying: “believe fully in what you do, don’t stop, even if you find a sea in front of you, always believe in your goals “. I felt exactly like that, ready to walk on water.

The third one (“Alzati e Cammina”) I think was our most complete work, even if it was done in a very dark period of my life. From the separation with my partner to the arrival of the pandemic, but I had that title in mind. It was a way to react. I can say that this record was my cure.

As for the collaborations it was just a succession of things. Monte (Montenero ed.) and I met in Milan and we immediately agreed that it would be cool to do something together. SmooVth had previously worked with J.O.D. on other things. For me it was an honor to have him on the record ”.

Speaking of the New York MC Smoovth, it is clear that you have found great inspiration and motivation from the “renaissance” of the overseas underground movement in recent years, driven by Roc Marciano, Griselda Records and so on… In fact, who better than a Florentine rapper could, in fact, name one of his albums “Renaissance”!? Can you tell us about the album in question produced by Il Torsolo and how it affected your artistic path, the revival of productions based on samples and on the lyricism of the MCs, in which you seem to move perfectly at ease?

CREEP GIULIANO: “I had known Il Torsolo for a while, we had been talking about doing something together for a long time. We both have great respect for each other, we were just waiting for the right moment to do something. In addition, my brother Piccolo JY had already been under house arrest for a while and I thought it would be great to make a project with all three together

The title Renaissance is actually more due to the situation of Piccolo JY, who really needed to escape, to be reborn. It was my gift for him and a great satisfaction for me and Il Torsolo, given the final result.

As for beats with samples and MC lyricism, what about? Sure, Roc Marciano and Griselda inspired me, but this has always been my world. I have been writing since I was 14 and I have always listened to rap, for me it is inevitable to be captured by certain types of beats and it is impossible not to talk about my reality. This is the only thing a rapper has to do ”.

With some difficulties, even in Italy an underground trend inspired by the aforementioned American scene is being created: there are several valid producers and rappers, but what is missing from the Italian underground movement, in your opinion, to arouse greater interest in the public? Who are your favorite Italian and non-Italian artists, rappers and producers of the moment?

CREEP GIULIANO: “I think what the Italian underground is missing is only money. Artists like me or others in my position cannot survive on music alone, so it all comes down to writing, recording and releasing records with no support other than the money you earned working. If someone invests in you, your stuff reaches more ears, consequently your audience grows and your music makes space even on the upper floors. But there are too few underground Rap listeners to compete with other countries, at least for now.


I have no favorite rappers or producers, I listen to everything! I’m certainly more of an American Rap listener, but if I had to tell you some names I would tell you the ones that have marked me in my life.

Rappers like Jay-Z, Jadakiss, Vado, Cam ’Ron, Lloyd Banks or Roc Marciano will always have my attention, but I try not to focus too much. I need to enrich myself, so I try to listen as much as possible from trap to rap, from jazz to soul and whatever gives me something good”.

Do you have any other collaborations in store with overseas MCs and producers? Or who would you like to collaborate with right now? And what about the Italian scene?

CREEP GIULIANO: “For now I have no other collaborations with overseas artists in store but who knows! However, if I had to choose, I would prefer to collaborate with a producer I really like, such as V-Don or Harry Fraud.

For the Italian scene, honestly, I’m already collaborating with most of the artists I respect, both at the rapper and producer level.

I would love to do a piece with Tormento because I have always respected him “.

Speaking of your prolificity in recent years … What do you think are your three projects that represent you the most and of which you are most proud? And for what reason?

CREEP GIULIANO: “The first is “7891” because it was the album that changed me musically, the one that made me start working with beats with the samples. The second is not a record but an EP and is called “Bella Vista“. I love it and it was written at a very beautiful time in my life. The third is “Alzati e Cammina” just for a personal reason, because it speaks shamelessly about me and it was liberating to write it ”.

Do you have any direct experience or relationship with the graffiti scene in Florence? If so, what are the strongest names in your opinion?

CREEP GIULIANO: “I am not very attached to the graffiti scene, although as a kid I used to delight in doing something. I know that there is a beautiful scene both in Florence and in Prato and around I see many dope pieces, but I can’t tell you my favorite names.”

Do you have other projects coming up for this 2022? Can you anticipate something?

CREEP GIULIANO: “The first work with Fat Fat Corfunk and Montenero of which I am very proud has just come out (December 2021 ed.). The album is called “Parole Sante” (“Holy Words”) and there are 7 fire tracks…

Thank you very much, ThrowUp Mag. For the interview. Greetings to all my fans and a big kiss to my family”.

Cee Gee: «Working with Westside Gunn & Mach-Hommy It’s all about the art».