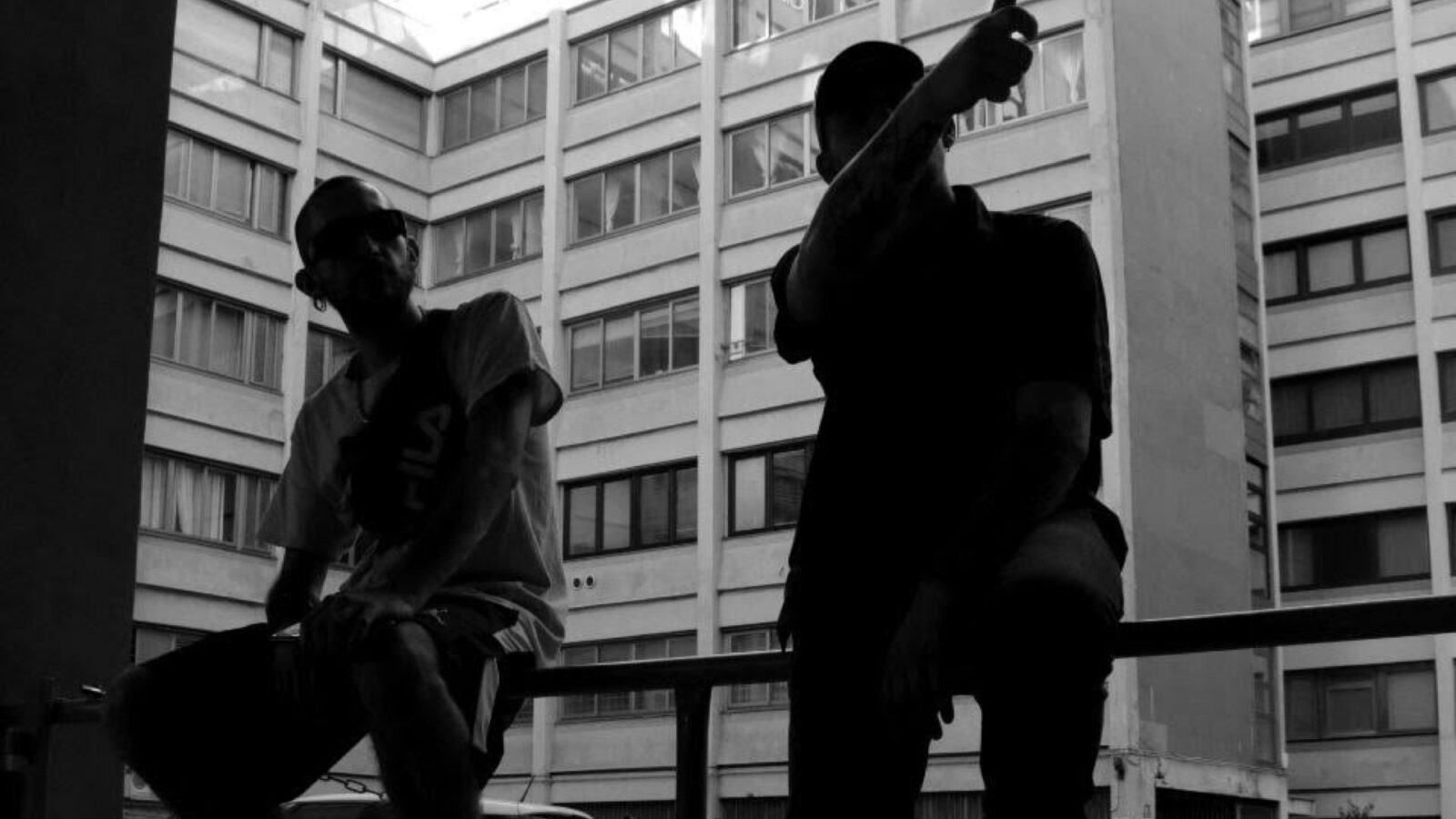 Hello Lise, we are happy to be able to ask you a few questions, as we follow with interest what you and Blant are doing, both personally and as Roma Guasta. What area of ​​Rome do you come from and when and how did you approach this culture as a kid?

Hi, I’ll be happy to answer your questions too! I come from an area on the outskirts of Rome just outside the ring road called gregna di Sant’Andrea, then I moved at the age of 19 and I changed various areas over time, I lived together with my brother until I was 26. For music the first approach was an Eminem record that they gave me when I was 8, at the time I didn’t do much with it but it helped me because I listened to it again shortly after and I immediately understood that this was the kind of music I liked. Then making even graffiti things came together, for both me and my brother it was still a way to be different from the others, to stand out since we were the only ones in the area listening to rap and doing graffiti.

What exactly is ROMA GUASTA, a duo formed by you and Blant or a crew also made up of other members? If we’re not mistaken, you and Blant are, in fact, blood brothers… What kind of relationship binds you and how was Roma Guasta born?

Yes indeed we are blood brothers, the crew was founded by the two of us more than ten years ago, then over time other members joined but only in the graffiti field as they are today, the only member who also made music was “Johnny The Worst” Aka Cros.

The bond we had was magical and I think only crews that are truly united can understand, we weren’t just damage mates, but true brothers.

A passion that unites you and that often emerges in your songs is, in addition to that for Rap, that for graffiti writing! Can you tell us about your story as graff writers? And who are your reference points in the Roman graffiti scene?

Coming from a place where we were the only ones doing graffiti let’s say that with all the problems we had, it was probably the best outlet that could have happened to us other than music, in a nutshell it was born for fun. Then getting to know other bombers like “Nob” who is still part of the group, I understood that we weren’t the only ones, in fact Rome was full of them. We didn’t grow up with magazines, they didn’t interest us when we were kids, the only ideas were those that we saw around with our own eyes, so I can’t give you names in the field because we were totally mavericks, Initially linked more by the vandalism of graffiti than by his art, that came with time.

The albums that, in some way, launched you into the Roman underground rap scene we can say were “In Times We Need” and “RG Music” produced by two of the best producers in the capital: Cuns and Depha Beat. How did those two albums come about and how did you meet these two very strong producers? What is your relationship with them and will you collaborate again in the future?

Yes, without a doubt they were the two albums that gave many people the opportunity to get to know us in our own small way, we met Depha in 2017 because we needed a studio to record in and a constant collaboration was born immediately, for almost a couple of years 3 we had a weekly appointment, undoubtedly a period that served us a lot to form us on a musical level.

We met Cuns later but also with him there was immediately a great feeling  both on a personal and artistic level, for me he has always been the bridge between Italy and America. From there the idea of ​​making half album with Depha and half with Cuns in the case of “In Times Of Need” and working all together was fantastic, as far as future collaborations with them are concerned, I think they won’t be missing and maybe there already is something in store!

Lately, however, it seems to us that, above all, you have focused on your solo career… Hence your projects with the producer Sick Damn, “Quick Shit” , whose second volume has just been released: why this decision, lately , to give precedence to your solo musical projects? And where does the idea of ​​these “Quick Shit” with Sick Damn come from and how did you meet?

With Patrizio (Sick Damn) we met during a night because of mutual friendships and we became very good friends over time. The idea of ​​focusing on the solo stuff just came by itself, because I’m constantly needing to create and I travel so fast that it was a choice that sort of made its own way. “Quick Shit” kind of represents the stereotype of my musical idea, in the sense that I really like creating in the studio, so entering without anything, not even the lyrics, and exiting with a finished piece, from there we decided to make this saga which represented the music in its purest state, therefore without too many words and without excessive post-production work.

I can anticipate that volume 2 will certainly not be the last.

Can you tell us about the Da Specialists project, whose album was released last year, which sees you as a protagonist with Dj Snifta, Clas K and Dj Elle?

Da Specialists as well as being a project, it’s a real crew, we see each other regularly and we are also preparing a lot of new releases with them. The album was born by chance for an evening in which the 4 of us met to make sessions, from a piece we recorded that night we decided to make an album, and more or less like with Sick damn the working dynamics are the same. We’ll hang together, make a beat, I write and then we record.

For me this is the concept of music, it has to be something that comes out by itself if you can create the right situation.

It seems to us that you are in tune with the “new” American underground scene in terms of sound and approach to Rap, which, at least, distinguishes you from the mass of guys of your generation who in Italy, on the other hand, conform to drill sounds or arriving from France. What led you to take this path, which still seems niche in Italy? Who are your reference points?

In fact it is so I think you have hit the point, I’ve always felt more part of the American scene than the Italian one, I’ve always been very attached to the sound of the East Coast. Since I was a child, Roc Marciano has always fascinated me, precisely because of the simplicity of doing things and its imprint, as well as obviously for the taste it has. When I saw that others followed in his footsteps, for example like Griselda etc,  I felt that I too wanted to be part of that scene, in fact at least in Rome that sound before me I don’t think existed, but somehow I always follow my flow. As a point of reference I can tell you, in fact, only Roc Marciano.

To close the previous question: I never make choices based on how far my music can go or not, I always let inspiration guide me on the right path!

How do you see the underground scene in Rome today? Who are the strongest emerging names in your opinion?

From the point of view from which I look, the scene is very lively and above all there is a great desire to do things, the negative aspect is that those who organize events always focus on the same names, it would take a bit of a shake-up on that side but it will come.

Remaining on the Roman theme, my favorites are those with whom I collaborate in the end, therefore like rappers Sick Damn, Sillamandria who is a very underrated pen, Pacman XII, Panz, William Pascal and White boy who are members of (Do Your Thang) who at in my opinion they are among the strongest both in terms of attitude and how they are on stage.

What do you think are the stylistic elements, both in Rap and in graff writing, and character that differentiate you from Blant? And what about your musical tastes?

I think that in graffiti we have two different styles, he knows how to use colors much better than me and is very good at abstract things, instead I love the round and full bombing mold more, I never use more than 4 or 5 colors in the best deals ahahaha.

On the other hand, in terms of listening to music, we have always found ourselves in complete harmony, I have dedicated years and years to finding artists and stuff that I liked.  Research is undoubtedly a fundamental tool which unfortunately has been forgotten a little too much, it seems as if too much effort is being made, for this reason people are satisfied with what is on display, to put it simply.

What can we expect in the coming months as both Lise and Roma Guasta?

In the months to come, that is, throughout 2023, I plan to make many releases, I want it to be a full year. As well for Roma Guasta we already have a couple of things ready to release, plus we are starting a new album!

As a soloist it will be difficult to establish because I have so many things I’m working on, also self-produced and as many things waiting to come out, so I can only say that this year is my year!

Eto & Futurewave: «We’re the Dead Poets. The voiceless with the voice»