Hey everyone. My name’s ChildHood P and I’m 27 years old. I’m half Italian, but I was raised in Harlem, New York. I can easily describe myself as a true Hip-Hop head. I guess you could say I’m infected with Hip-Hop. For many years, I’ve been closely following the Griselda Movement. I’ve been to dozens and dozens of shows, including Freddie Gibbs, but I especially focused my energy on the Griselda Epidemic – that’s what I like to call it. I’ve been to more than 30 Griselda concerts, mostly on the east coast from Buffalo to Baltimore.

Throw up Magazine gave me a chance to bring my testimony to the table here from the US, your favorite rapper’s shows that I will be a part of…exclusively from the first row!

For this very first episode of : “Raw from the 1st Row”. I’ll be taking you all with me at the “HOLIBLAZE” – the concert where Flee Lord, Rome Streetz, Rigz, and the whole Lord Mobb will come on stage at the Sony Hall of New York City on 12/26/2021. 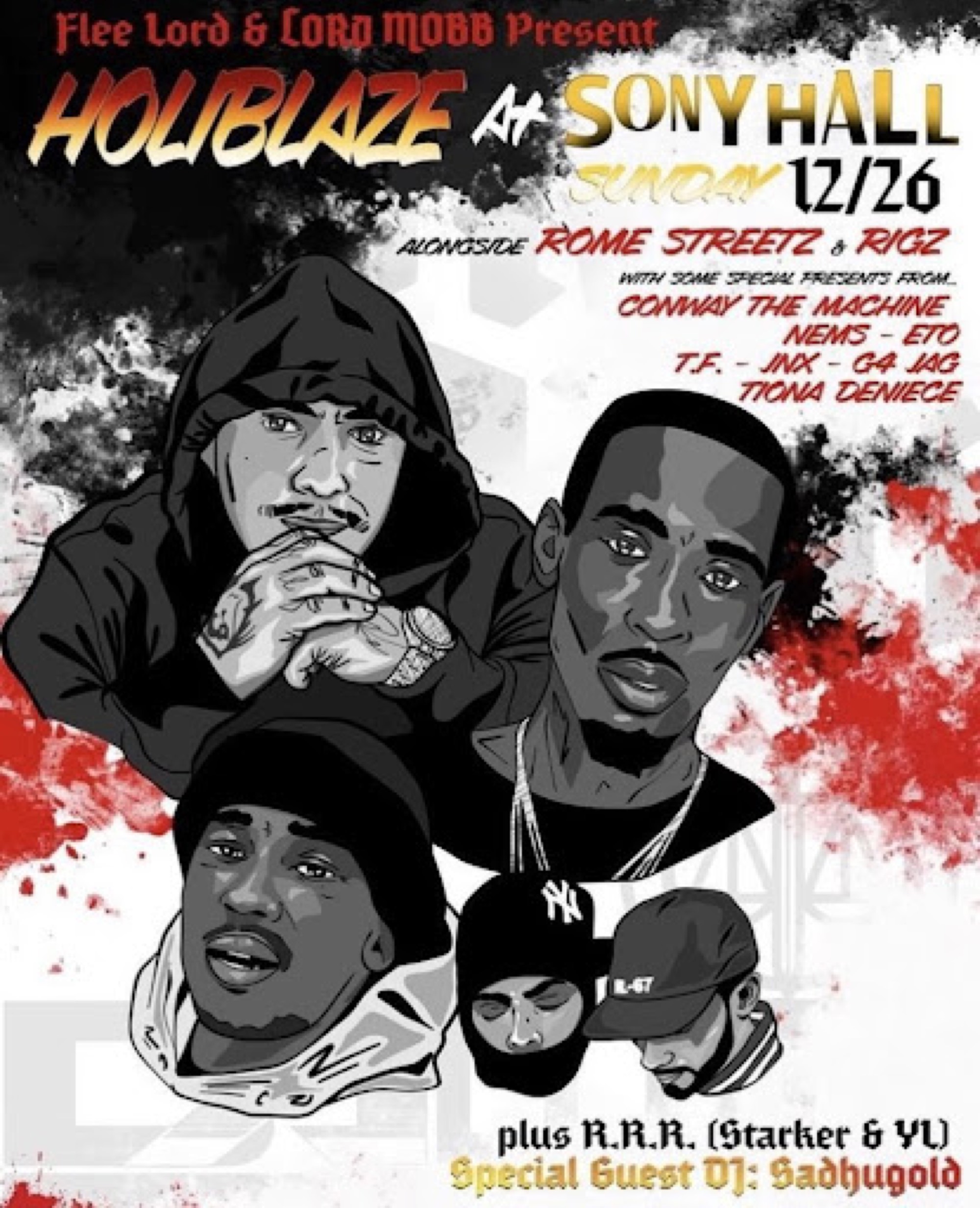 Today December 26th, everything is set for the show at the Sony Hall of New York City, a very well known spot for events of this taste and caliber, located in the heart of Times Square on 46th street between Broadway and 8th ave where “HOLIBLAZE” is. A name that’s on point because of the low temperatures that are usually felt around this time of year during the holidays in the streets of New York. 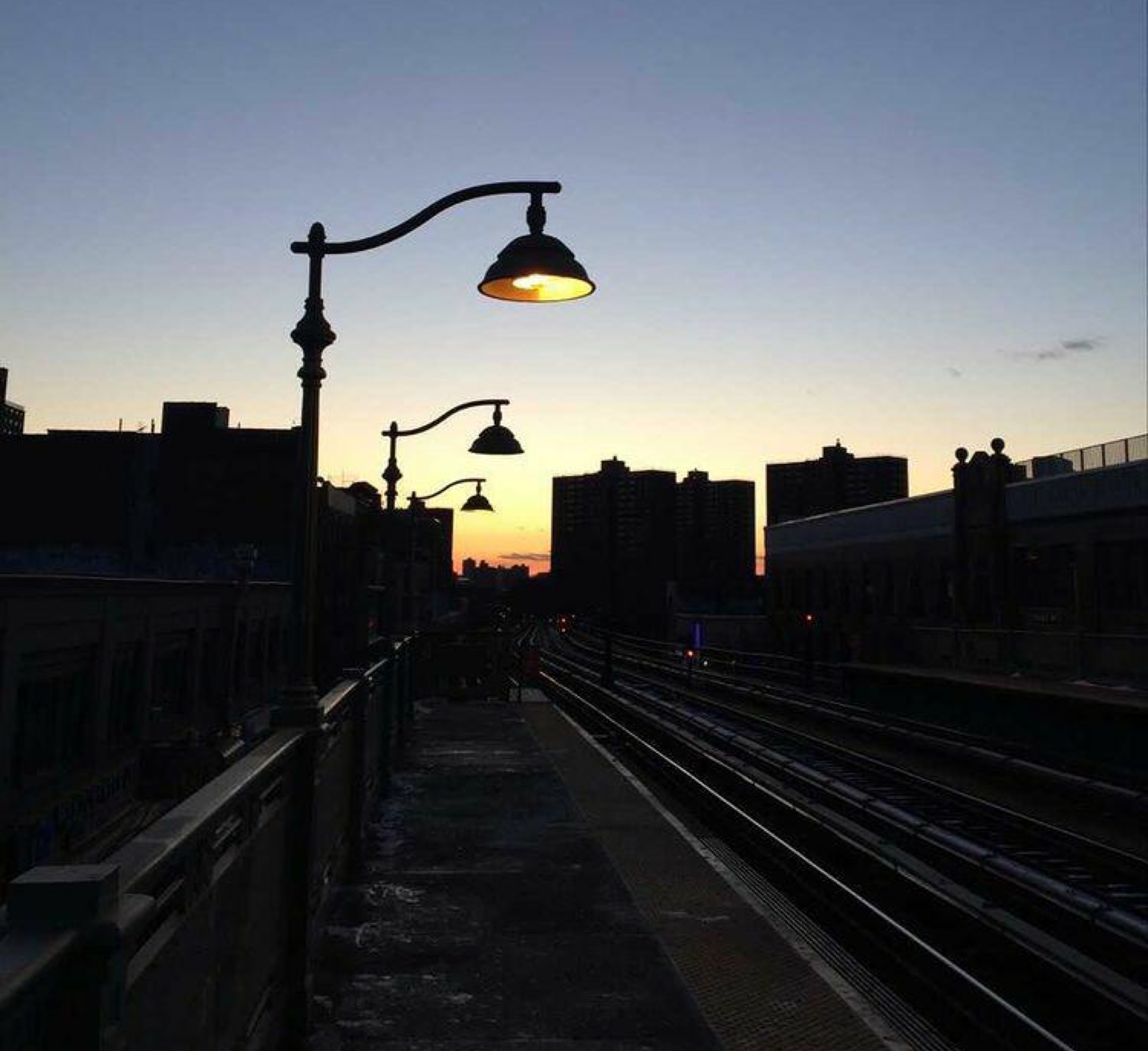 On the show’s roster we have freshly signed Rome Streetz, the newest member of Griselda Records, Rigz from Da Cloth, Rochester Crew (a city located 5 hours from New York), The RRR (Starker and Y L), and Flee Lord – very well known around the Griselda Movement he will be there with his crew the LordMobb.

Last but not least on the Sony Hall roster for tonight’s Conway The Machine (La Maquina) Roc Marciano, Eto, Nems and T.F. along with other Lord Mobb members.There are very high expectations for this show. They’ll make the audience turn up with their cold lines and real New York rap that matches the grimy weather of the Big Apple.

The doors open at 7 pm ET. The line outside wasn’t as long as I expected it to be, since the concert would’ve started at 9 pm local ET (in Italy around 3 am). I honestly thought more people were going to show up. Even though the COVID situation is not looking good and apparently it’s actually making a comeback lately – especially in the last few weeks and the weeks ahead, it seems that also Santa decided to take precautions and use social distancing as well.

These type of concerts radically changed when we got into the pandemic and from my personal view, deep down it’s not so bad because they bring me back to the old times before all of this even started when Griselda Concerts where only for real hip-hop heads that appreciate this style that remind them somehow the Wu era or the Lox. There were no clout chasers or occasional audience members…. I really think it’s some kind of “perversion” of mine lol.

Let’s backtrack though. I was able to get in around 7:15 pm. The first showing performer Sadhugold, DJ and producer that worked alongside with Westside Gunn himself very closely with his characteristic mask even though the Sony Hall was still kind of empty….

The lights start to create the right vibe for the first artist coming up on stage, Rigz, a young and talented MC from Rochester City located 333 Miles away from the city of New York. He shows his impeccable skills on stage, glacial rhymes that match with his North Face jacket and hoodie an essential thing for this season along with the unique New York flow imprint cold like the Hudson River.

The spot started to get packed and turned up. We touched a number like 200 people most likely, when the most awaited MC of the night- the main event comes up on stage. Rome Streetz showed up and plays some of his classics the very own Brooklyn rapper destroys the mic with his dark and nasty rap from “Ace of Swords” to “Stone cold Soul” two of the best records inside his project with Dj Muggs “Death and the Magician”, he kept going then with another incredible record “ Snow Beach”, one of his rawest track from 2020 project “Joyeria”.

Overall Rome shows his crazy ability on stage in fact he’s very solid even though the spot was not up to full capacity he stayed steady with his gritty rhymes with no intention to stop. He also played “Peri Peri” to wrap up his exhibition, record he done for one of Westside Gunn latest project “Hitler wears Hermès 8 side A “ but the one that personally hit me more was definitely “96 Nauti Windbreaker shit” from one of my favorite project album trilogy Noise Kandy 3, “Overdose”, for this and “N.a.S.” also Chyna streetz came out on stage.

Honestly I had no time to take a break and clear my throat with some water that Flee Lord came out with his crew The Lord Mobb that I honestly didn’t recognized everyone beside Mephux, his producer, G4Jag with his unique style and voice , T.F (one of ScHoolboy Q homies) and Tiona Deniece.

Flee plays some tracks of his very rich discography to go behind scenes and give more space to every member of his crew , keeping it real with that New York grimy sound and gritty beats like we say here, something very far from mainstream shows, no playback , no autotune everything that was spit on the microphone is real talk.

If I have to go to a concert I want to listen to the artists puking their voice on the microphone.

TF was the one that intrigued me the most. He’s really smooth and the stage seems to be his comfort zone.

After everyone blessed the mic Flee took a brief break to give out a couple of Rolex like he previously claimed on social media. The Rolexes were given to a day one of the Lord Mobb that supported every single one of them and a Lady picked from the crowd. I also want to add also that this was a very honorable action from the Lord Mobb boss.

On the other hand my doubts turned out to be exact : there was no trace of Conway, Roc and Eto yet that were written out in the starting roster and in the flier of this event. When I lost my hope to see them come on stage, Coney Island’s very own Gorilla Nems wrapped up the show with his Iconic “Bing Bong” song that went viral in New York in the last months.

For the most part I think the show was on point beside the missing special guests, the weather was cold but not too cold with not too many people that came out but the realest were there and that’s enough in my opinion…. Maybe also because New York is getting ready for another round or wave of ‘Rona (Coronavirus)


But for the one that wanted to digest the Christmas dinner and having a good time with some raw and spooky rap with pure and original sound that just in this city you can listen to, you were in the right place for sure. Walking through the merchandise stand, I got little upset… I was looking for more merchandise from the Lord Mobb.

But I see right away the “ Bad influenyce” hoodie from Rome Streetz and I decided to also cop a hoodie. Around this time of year, it’s always useful to have. I’m going towards the exit I was waiting for some people to come outside, in fact not even that cold to be the end of December and to dip right after, I was hoping Rome was going to pop out at some point since he previously told me he was going to sign my “Bad influenyce” joint.

My stomach starts screaming and I start to feel hungry. Maybe I’ll get it signed the next time he comes around… but as soon as I turn around I see Rome coming out and luckily he remembered about my request. I didn’t think twice about it  and I handed my Hoodie to him and boom, I got it signed by Rome Streetz himself, now I can really go home satisfied.

I thank him and I start walking towards an empty Times Square. It’s not really usual since it is Times Square and it’s always crowded and packed. Usually after these type of concerts I stop by some local New York made spots to grab some food like the very famous and well known 99 cents Pizza or some sandwiches like The bacon egg and cheese or the Chopped cheese, even though is better to wait to be around my area where I can go to the usual places that I know a little bit more. 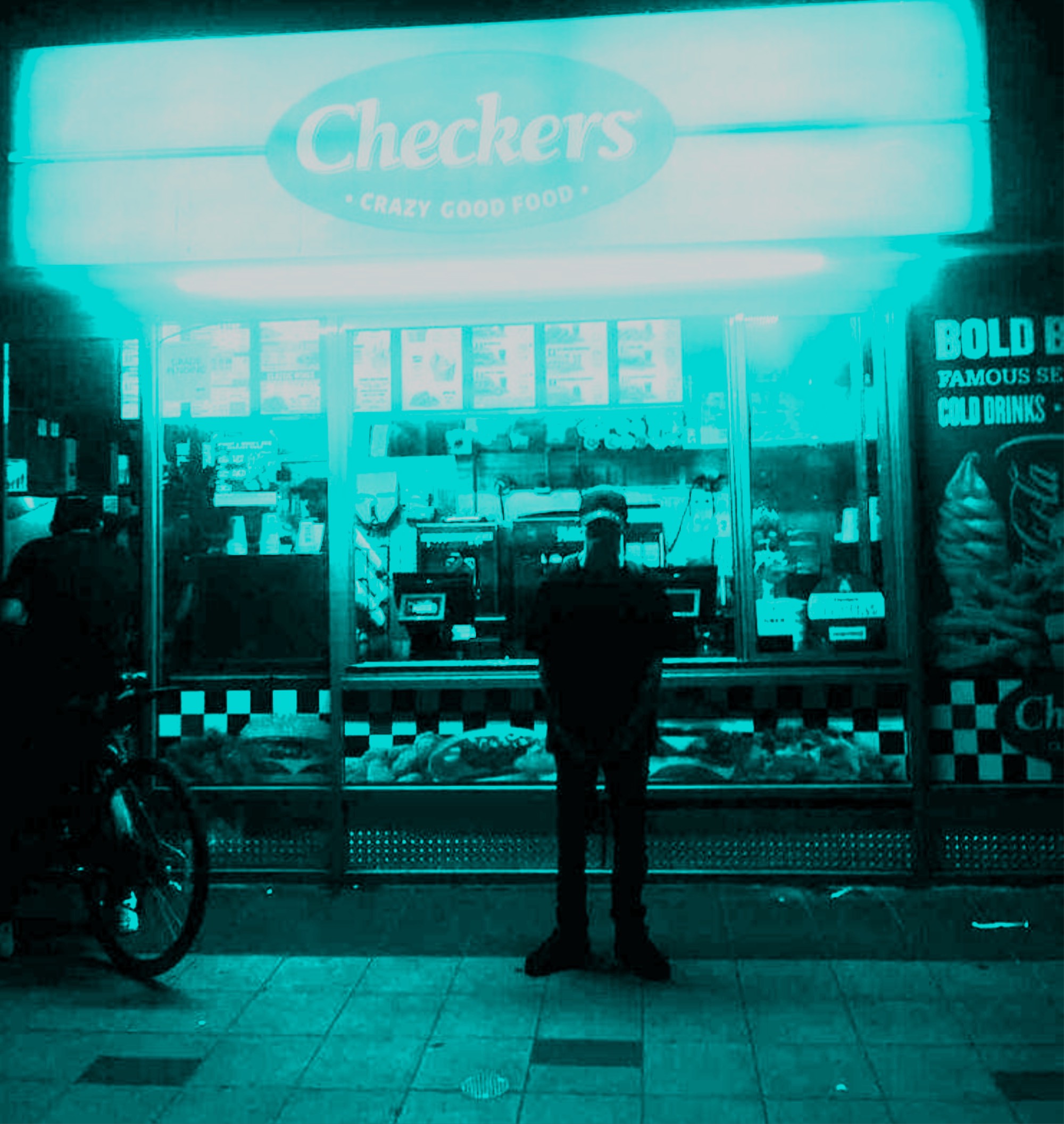 I decide to take the Subway on 49th street right behind the big steps in Times Square and take the N line get off in 14 street Union Square where I usually take the L all the way to Myrtle–Wyckoff where I live now Bushwick/Ridgewood area although the night service it’s kind of slow there’s always something to be entertained from inside the New York subways,with the music from the show that still playing in my ears in my head I’m already thinking ahead to the next concert to go to and, maybe to tell you all about.

Take Care! ‘Till next time! 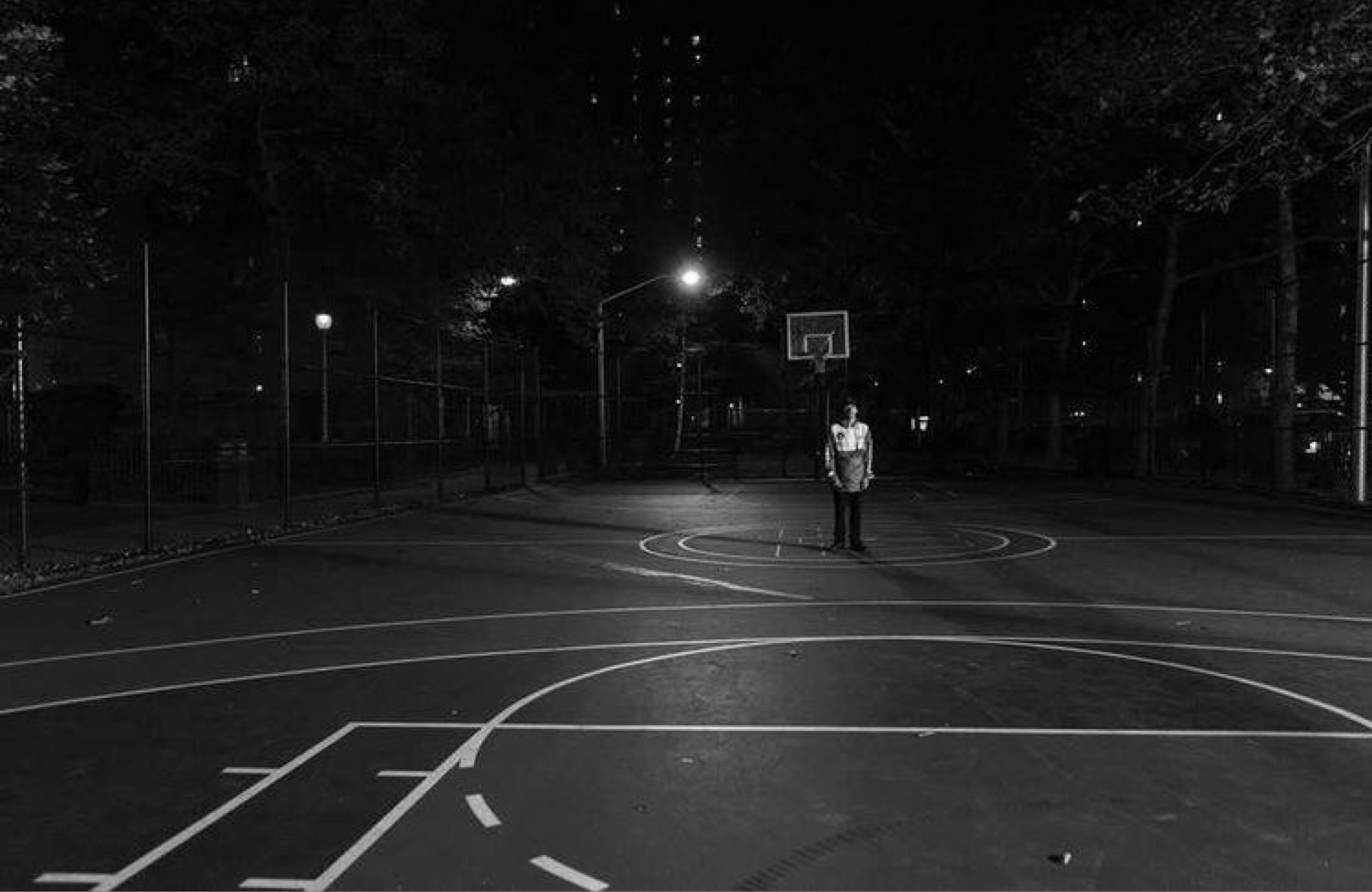