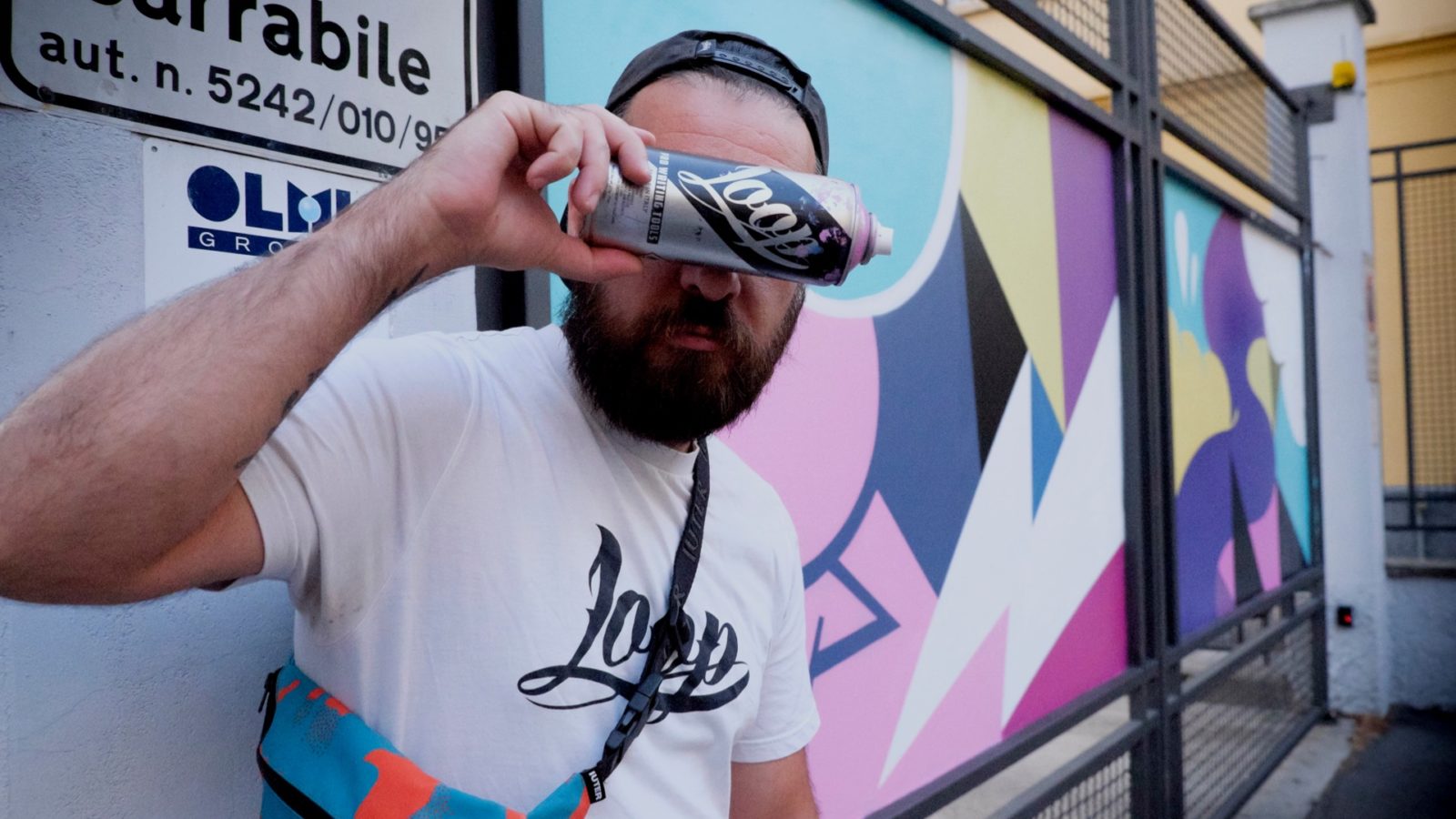 How and when did you approach the graffiti writing culture and what are your first memories?

I approached graffiti in about 1997, thanks to classmates already practicing.Initially, it was like a drug. At that time we were quite unconscious and I remember to devastate everywhere with 3cm and 5 cm markers loaded with “death black ink”. On a Sunday afternoon we went out of the Indian Cafe really “degenerated”. That days I used to make more tags than infame style, and I remember that finding legal spaces wasn’t that simple. If you didn’t join the older ones it was hard as hell for you to find your place in the sun …At that time there were no fb or whatsapp groups. It was really hard, and perhaps just because “the fatigue was bigger” you gave more value to the whole thing. 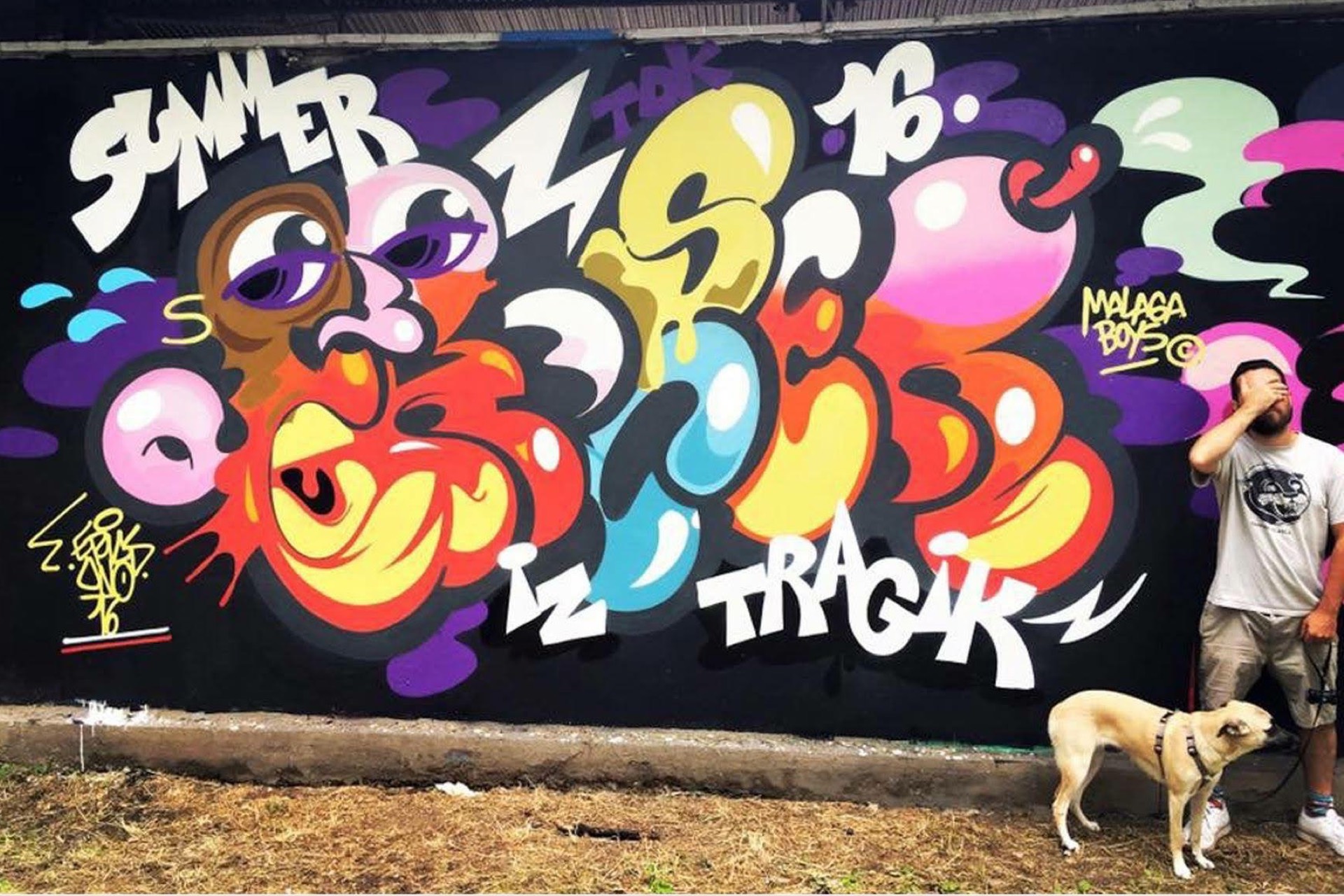 What is the story behind your stage name? Does it have a specific meaning?

Honestly, as an idol of mine said “I liked the letters”.

I have more than one Crew, the TDK is the most famous for sure, but in ’99 I was already part of a crew that was going hard in Milan. I don’t know if you remember the AM Crew. It was me, Morkone, Pois, Dokone, Gens and others I don’t remember … however, they were the first to take me seriously around the street stories and panels. Then I got good and I started to sell my stuff a bit. It was there that Raptus, founder of the Tdk crew asked me to join them. Today, together with my collective VSNHRY which includes MozOne, Korvo & Spra (who is the Crew chef), Tdk is the main crew. Last year, at Looperfest, painted almost the whole Crew and it was very cool. 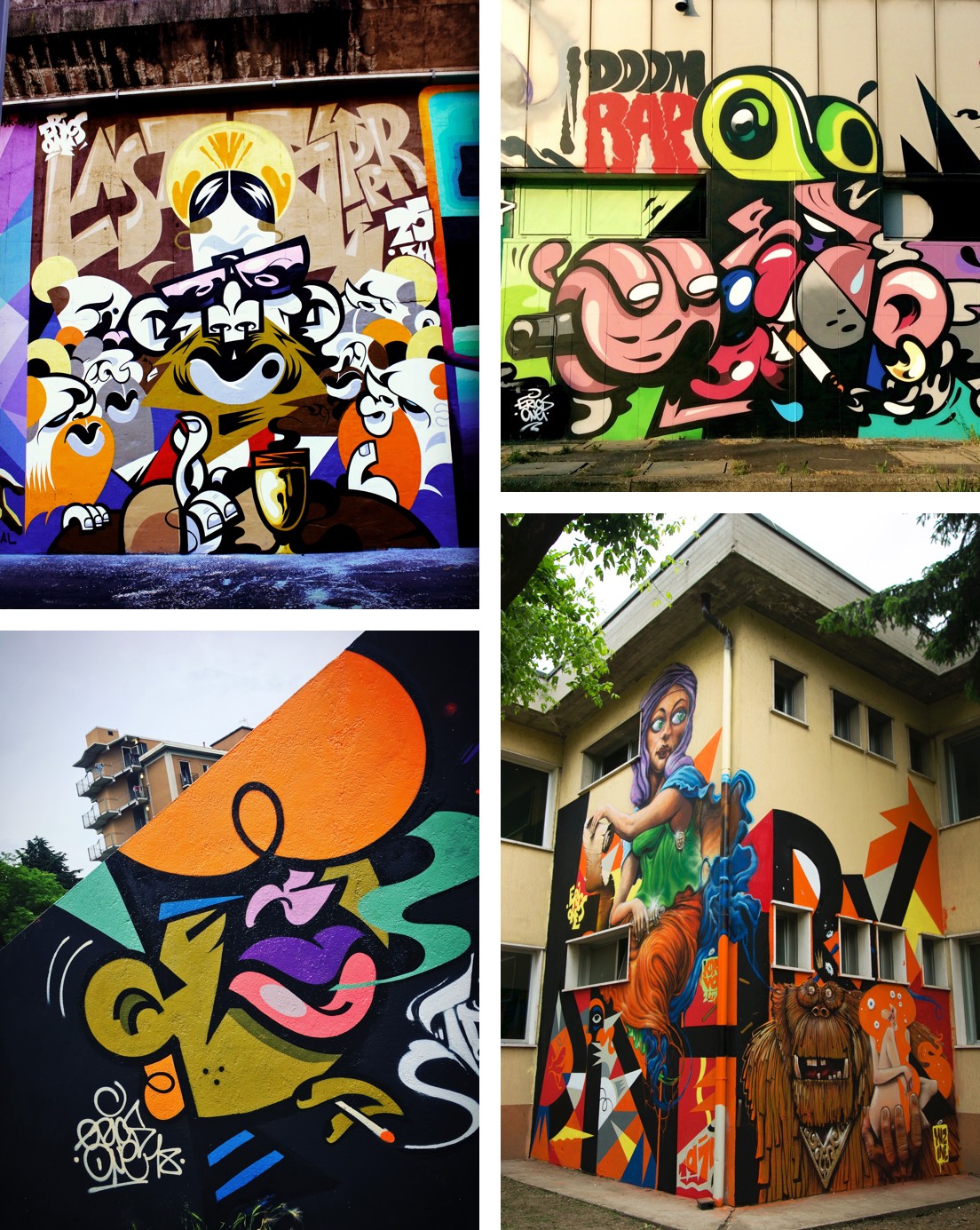 Tell us about Erics’ attitude in everyday life. Did the graffiti writing affect your character and personality? How?

I am Ericser From the Bloxxx, Mauri for my friends, Maurillio for my girlfriend. Surely graffiti has changed my character for the better, if you take aside the struggles, it is a discipline that awakens mind and body. I have always been very lonely (even if you wouldn’t say it) and the most beautiful and indelible memories are those before 2010, when my name wasn’t still around. When I was hungry for fame, I took the scooter going all around the city, the tag tours, the bulwarks and the “style exercises”; all of this has contributed to strength my personal growth, perhaps a little stiff in some respects, but I fought for it and I’m proud of it.Today there seems to be a little attitude to want to do everything. In my opinion this ego of Instalover is ruining a bit this game, but, thanks God, we are not under dictature and everyone is free to express themselves as they want. Surely if someone can’t stand me as I often say what I think without any compromise. I give the same lesson to my son Filippo Romeo Ericser Junior .. “Always say the true Brother ‘! 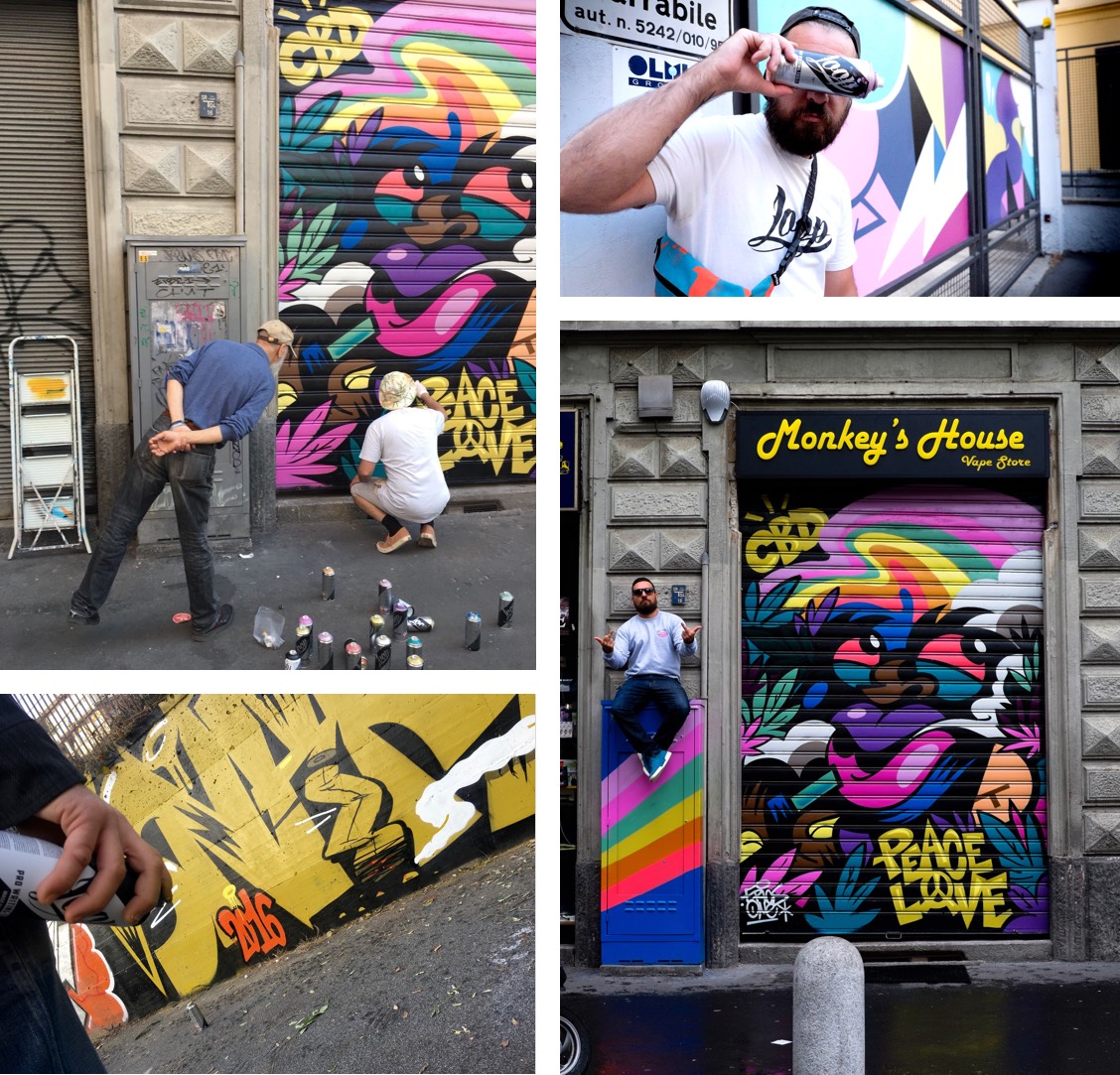 What’s the link between your works? What’s your greatest peculiarity? Can you also tell us about your formidable puppets? What does the influence of the 70s cartoons had on you?

So .. Still today I think I haven’t found an exact balance between what my brain thinks and what my hand creates. It’s an eternal struggle of cerebral and hormonal displacement, but thank God thc helps a lot. I can definitely say that a lot of references come from the culture of comics and old school / Trash 70s cartoons, like that atomic bomb by Ren & Stimpy, Supernatural by R.Crumb and a mix of illustrators who really glow for ‘originality’. Over time I developed a more minimal style, keeping that ignorant verve that I love so much, and combining the style as if I studied at Bahuaus J.

Tell us about how your style has evolved over the years and the supports you prefer to work on today. What techniques do you use? Do you also deal with illustration and graphic design?

Over the years my style has evolved from a fourth to an octave. I am very happy to have also started a slightly more pictorial and illustrative journey by expanding my fan base outside the world of graffiti (where everyone hates each other) ☺. I collaborated with high fashion stylists, some of my works have been sold for Sotheby’s, one of the most important circuits related to contemporary art globally and last year IBM contacted me to draw inside their new headquarters in Gae Aulenti, Milano.In a word, let’s say that I can’t complain on an artistic level, many small satisfactions day after day … I think of when around 2000 I was considered as an alien because I dressed wide pants and I used to paint on walls… 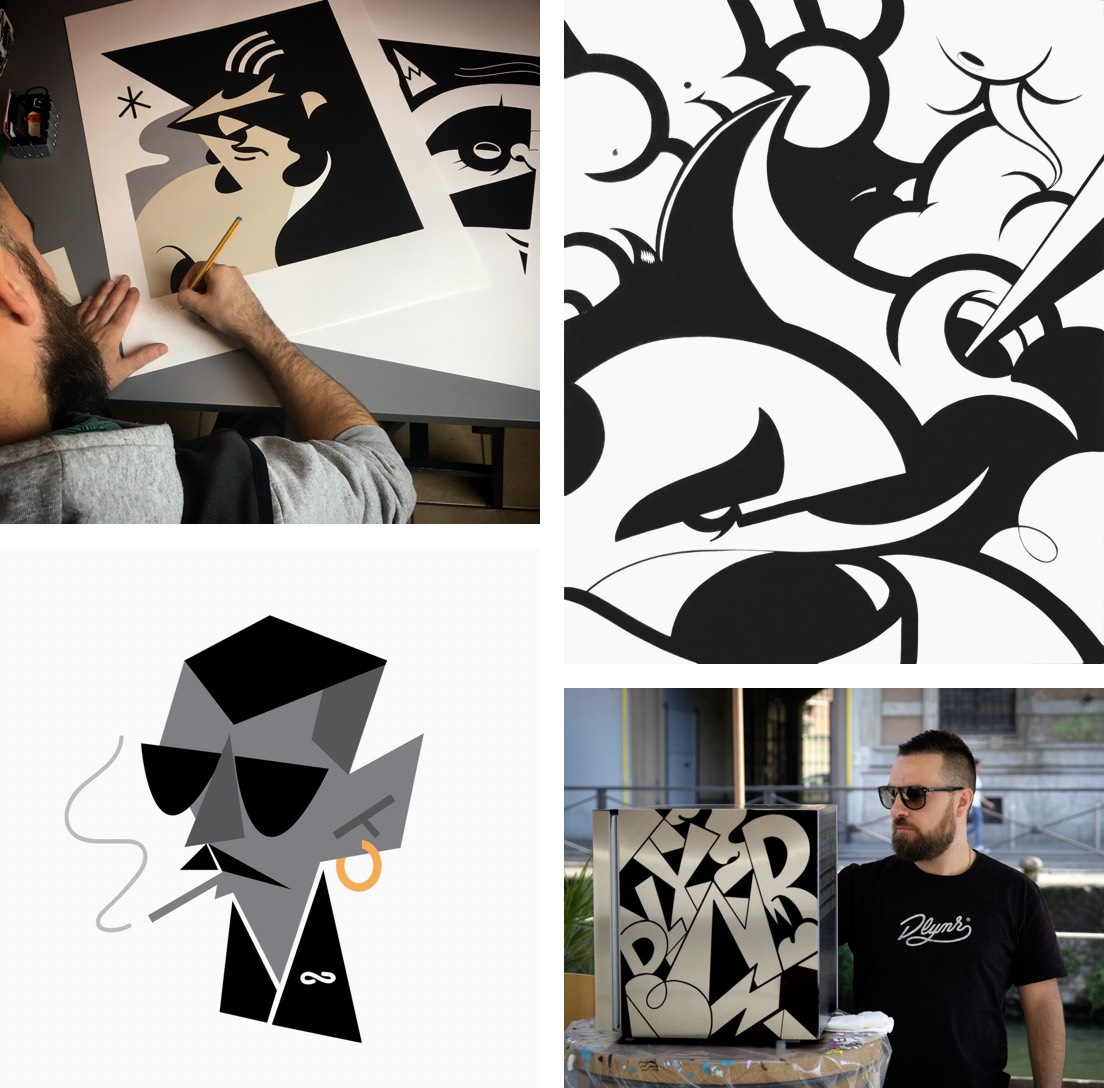 Which artists (not just graffiti writers) are you inspired by or have you been inspired by? What are the passages in the history of graffiti writing that, in your opinion, must be handed down?

There are many artists I ve been inspired and I’m still inspired by. Let’s say that first of all those who flashed me heavily with graffiti were the Swiss / German friends of the TWS crew..in particular that big bastard of Toast. Then, as mentioned above, a lot of underground comics authors and a good dose of cartoons gave life to my lopsided imagery. Lately I am also re-studying a bit of futurism and I have to say that Fortunato De Pero pump me up a lot .. I’m thinking to stole him the colors for the next wall J. As far as I am concerned, the fundamental passages of this culture are 3 and mandatory: Style, Respect and Knowledge. All the rest is “chatter and badge”.

When did you become aware to have a real spot in the noble culture of the Hip-Hop and its 4 disciplines? What did you experienced besides graffiti writing? Which music do you listen while painting?

First of all, thanks for the role you give me within the Hip Hop game. Personally I don’t feel like a big player in the system, maybe in about 10 years from now. I actually follow my vision as a humble graff writer who I am. In addition to graffiti, I can say that I experimented many other drugs … such as the Breakdance when I was teens, then Rap and Beatmaking. I still have a lot of fun composing songs in my spare time .. and I don’t want to spoil anything, but I’m producing a South Milan Trapper .. I just say “Gcomepestalozzi”. He already has his profile on instagram with very few followers at the moment but I believe he is a champion and you’ll hear about it …. maybe in 10 years J .. ah I forgot .. while I’m painting I do listen to Japanese classical music. 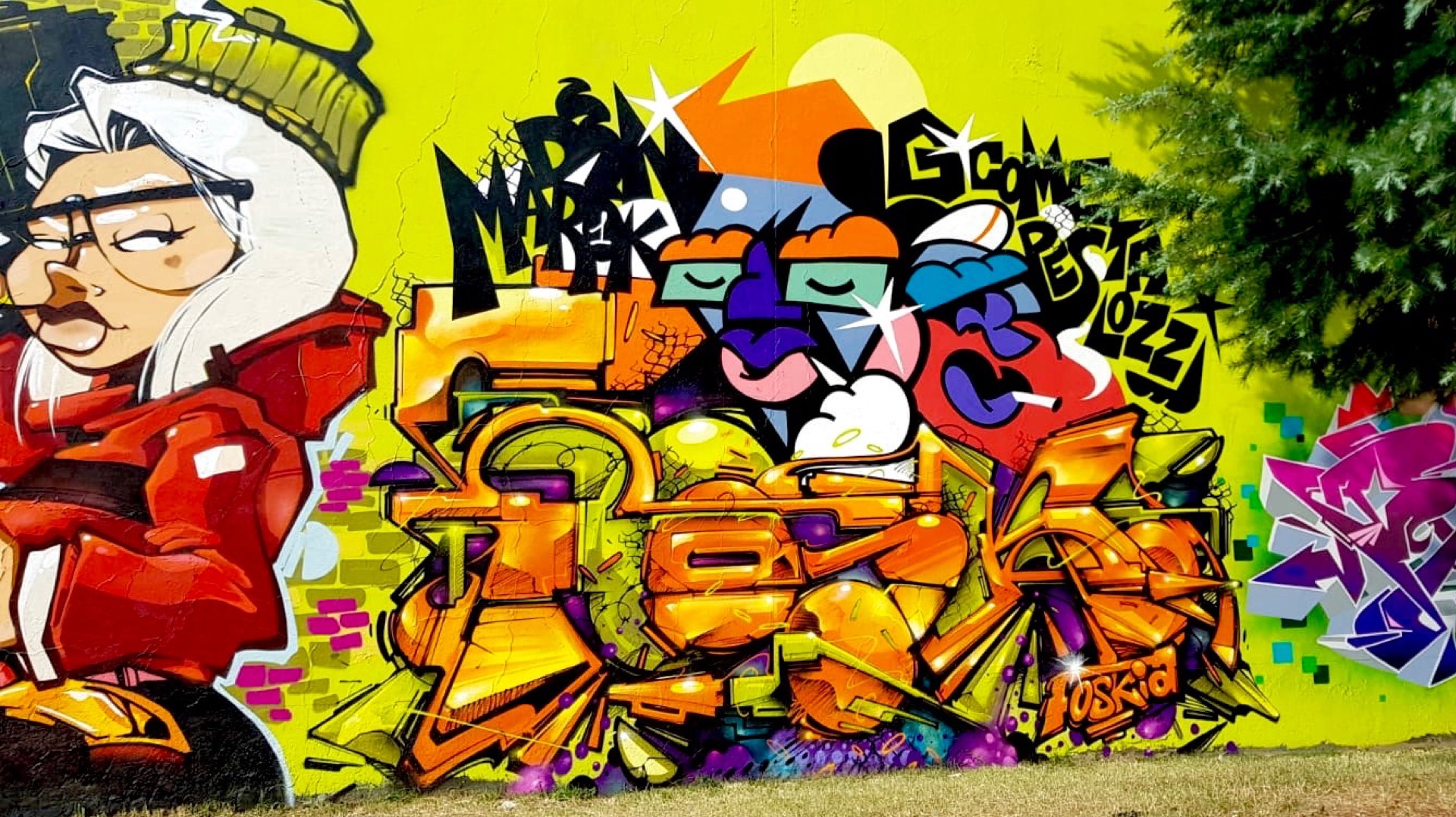 How do you see the actual scene of 2020 compared to the beginning ? Did everything change or is anything still the same? Any plans about the future?

Today the world of Graffiti has been greatly amplified by the web, it is a positive thing for sure, even if I think social media are the new drug of society ‘, and as the saying goes “the drug gives and the drug takes away” you have to find always a balance in everything, otherwise you risk to be faced just like a clown. Compared to when I started, about 20 years ago practically everything has changed, I don’t know if for the better or the worse. I only know that the panels of the ’90 were 30 times more fine’ (young Italian bombers don’t hate me but look at the Out on the panels of Rae or Mastro K and then we’ll talk about it). Let’s say that each Crew had its own stylistic code and it was an Alien stuff … Maybe the Internet has removed that Real patina and now with Street Art it also paints Peppa Pig .. I don’t know .. I’m not a nostalgic guy but the shit that goes for chocolate is something that really pisses me off! 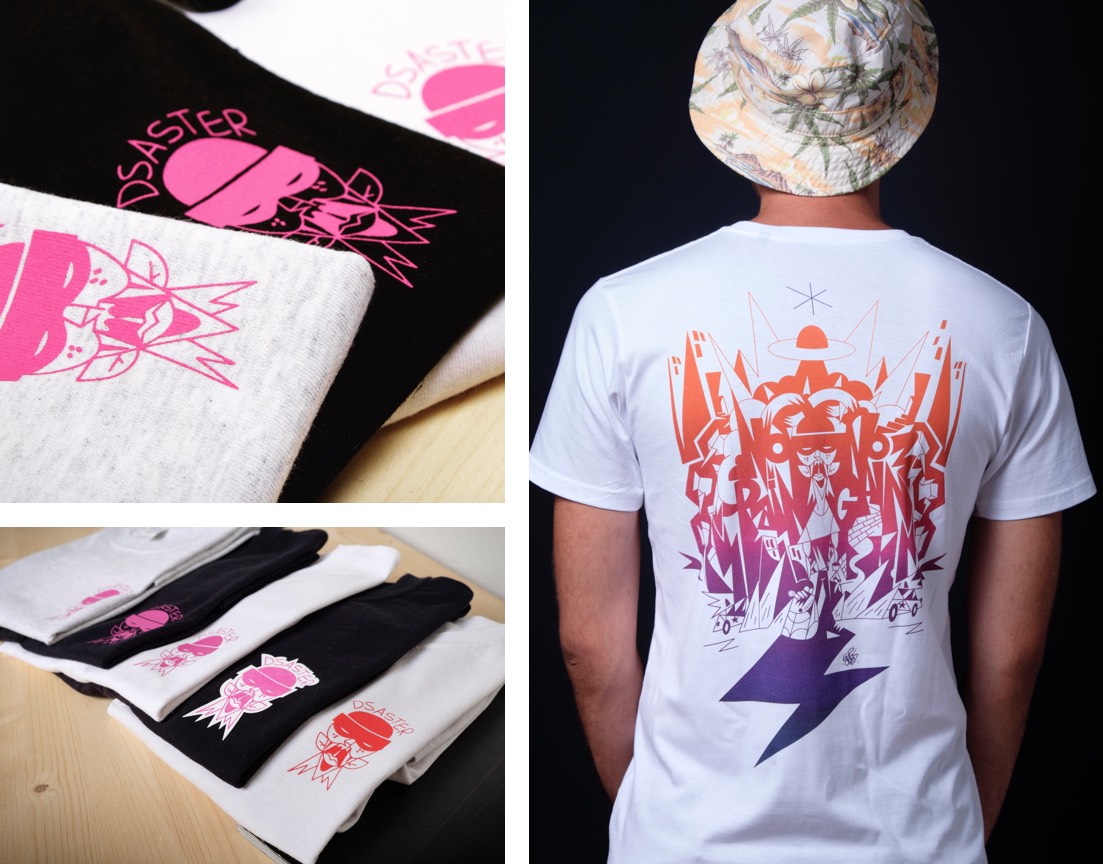 Concerning my future projects I can say that at the moment I am here in the middle of the lockdown like most of you and given the situation I have very little ‘artistic sensitivity … But’ apart from the Virus, the 5G, the Chinese and the Germans, I am looking to complete my website which I hope to present at the end of this shit (many thanks to all the friends that are helping me from home). I reprint my “Disaster Company” t-shirts that went sold out practically immediately (thank God).You can find them on the Astrofat.it website – Support Your Local Vandals! Oh I forgot .. with Mozone, one of my brother who is more exhausted than me we are making mini cartoons for instagram dedicated to Quarantine, the series is titled “40”. Follow it on @vsnhry’s profile because it’ is truly ignorant!

What advice would you give to kids who approach the world of writing today? 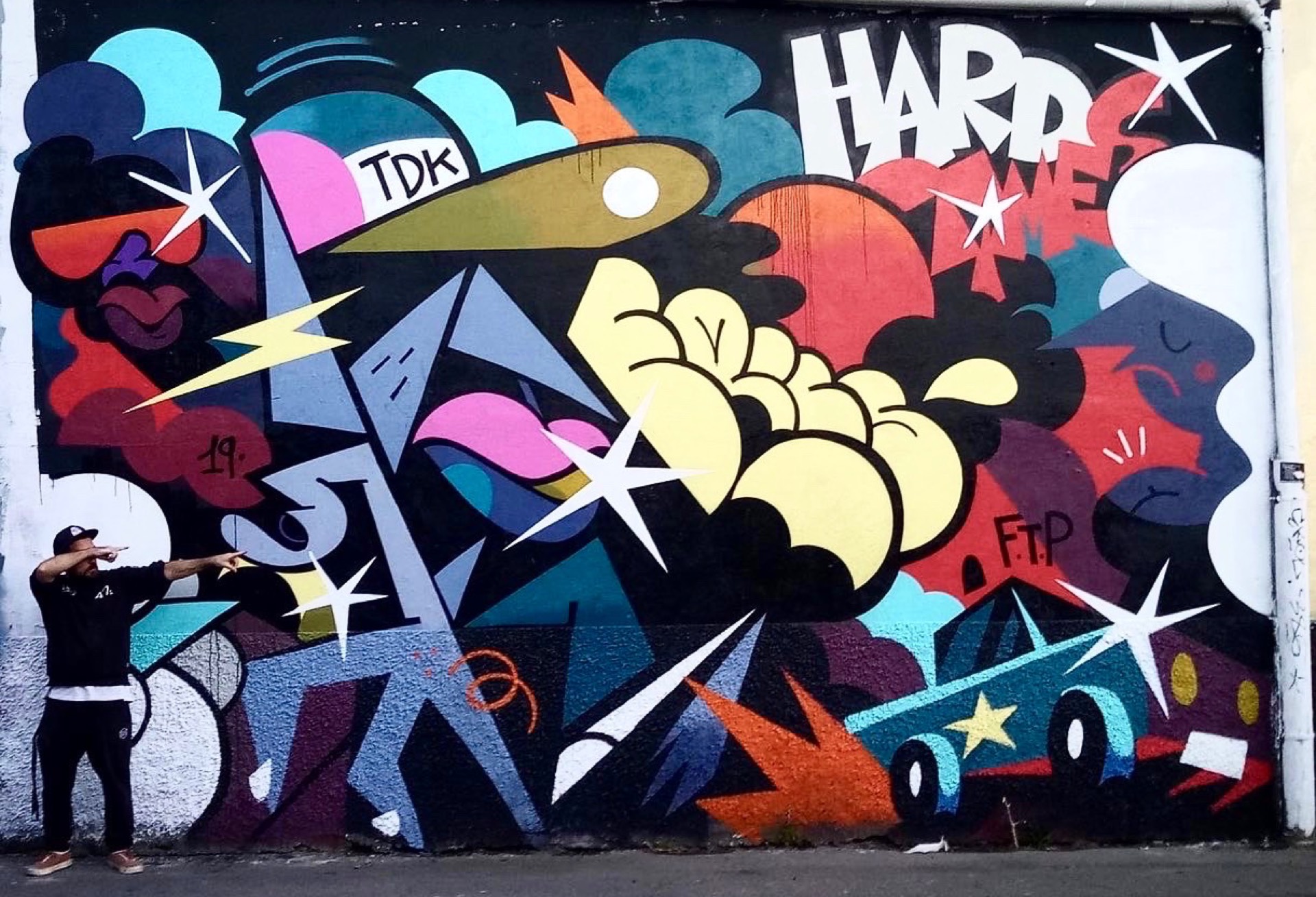