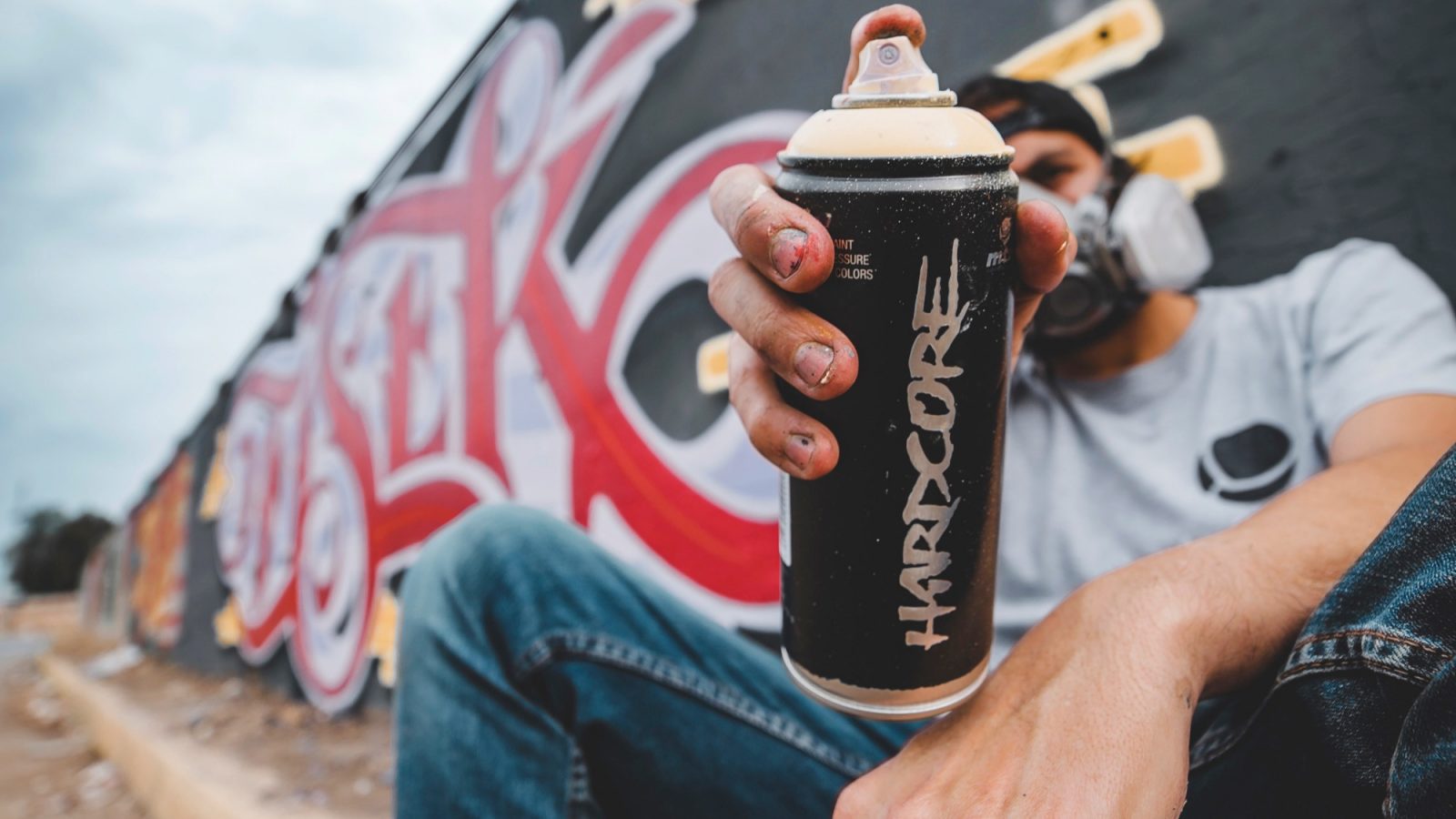 Hi Fisek, thank you for your availability! We would like to start by asking: how and when did you fall in love with graffiti and Hip Hop culture? What did spark the love for this culture? Do you have a clear memory of your first piece and do you have any particular anecdote about it?

Wow, my attraction for graffiti came from music videos from 90s rap groups. We didn’t receive much info about graff in Chile at that time so I had to pause rap videos and copy the letters haha. It kinda sucked cause they were in low resolution. On the other hand I got the chance to meet one of my best friends ‘Sean’ who was this kid from my neighborhood who had just moved from New York to live here. He told me about hip hop culture and explained the graffiti/movement, especially the terminology. I painted my first piece with him. We did a CWP piece (which was the name of our crew that we formed) and we did it in a playground less than a block away from the police precinct! Hahahaha we were able to finish it but someone ratted on us and we had to run in order to escape. Hahahaha it was a good start to everything. 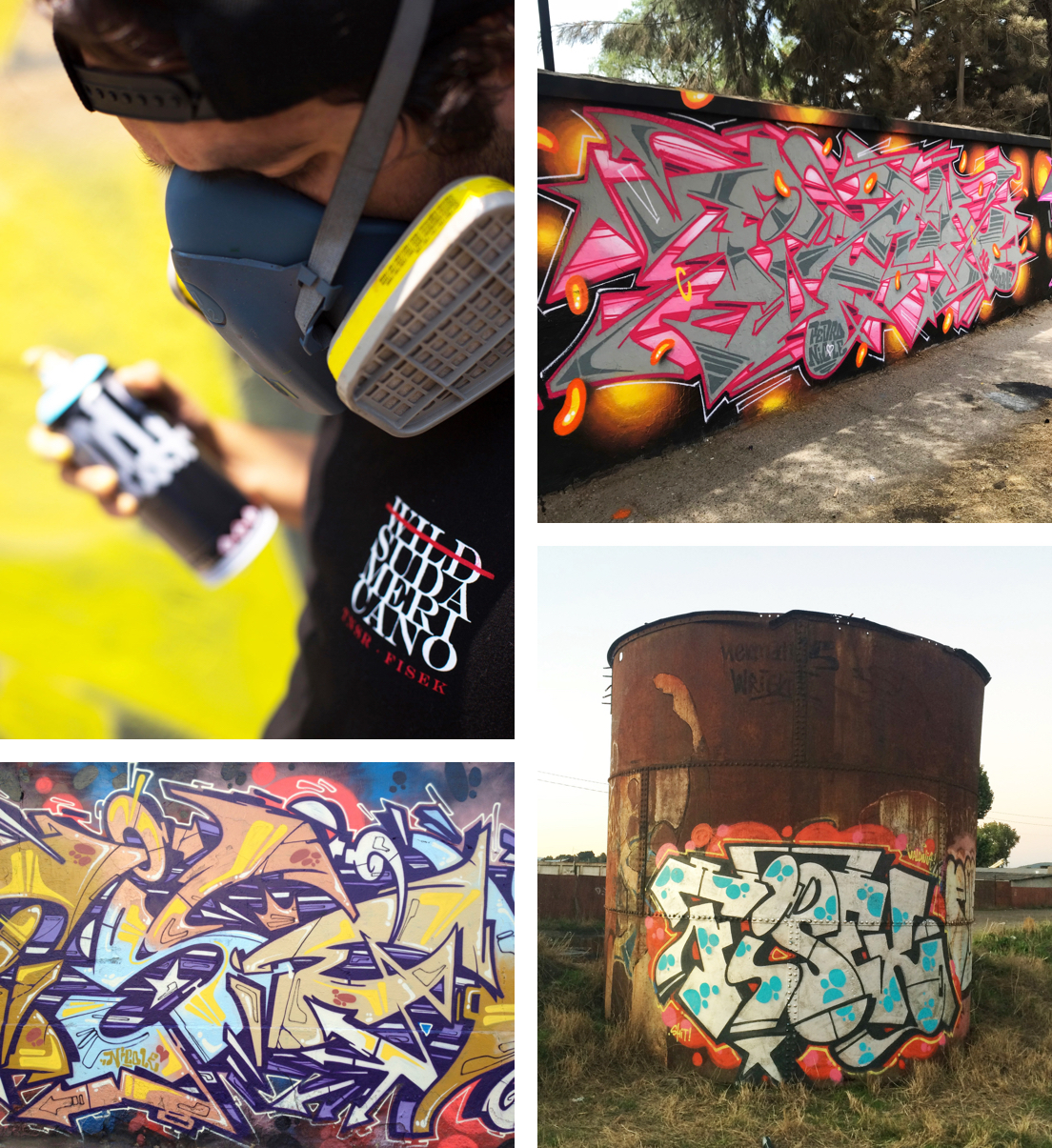 Do you belong to any crew? How did your stage name get life?

Yea I belong to a couple of crews here in Chile like CWP (Chile wild productions), Stgounder crew, CEC (como explicarte crew/how can I explain it crew). My tag name was born from hours of sessions writing and trying out different tags with my boy Sean, in fact he came up with it and I liked it so much that he gave it to me, it’s a play on the words ‘five-seconds’ which was the short amount of time it took me to post up some dope tags.

How has it changed the scene of Santiago de Chile over the years? How did you evolve your approach to graffiti over the years? Do you still have the same passion and lightheartedness of the beginning?

More than change, it has evolved and developed… there’s something for all types of tastes and disciplines, on one hand it has been mixed with South American muralism with clear country roots and on the other hand, there’s a lot of bombing being done by different crews throughout the city. As far as me, evolution is something I’ve always represented through my dynamic wild styles and the various ways of writing my name that preserve my characteristical/stylistic trademark. Thanks to that, I’ve been able to keep painting with even more motivation and consistency each year, it has transformed into my life therapy, a true moment of freedom between me and the streets.

Moreover, how would you define your style? And what led you to undertake a certain stylistic path?

It’s Fisek style, Fisek graffiti typography (a world of different alphabets), everything based on the essence of wild style. I would define it as an abstract impact but with infinite possibilities and variations of modifications thanks to my experience as a graphic designer and especially working with logos and lettering. What made me follow this path was the originality of these twisted letters with protruding arrows, something which I had never seen before in the history of art and design.

Many of your walls seem to be inspired by the “New York” style … Who are your greatest sources of inspiration? How did you discover them and how did they influence you?

New York styles still influence me. It’s the base of everything, it’s originality in the form of letters. They gave personality to a name, they evolved this personal expression on trains. Absolute vanguard stuff represented by the king Dondi himself. In reality there’s too many names that I admire but there isn’t one that stands out more than Dondi. 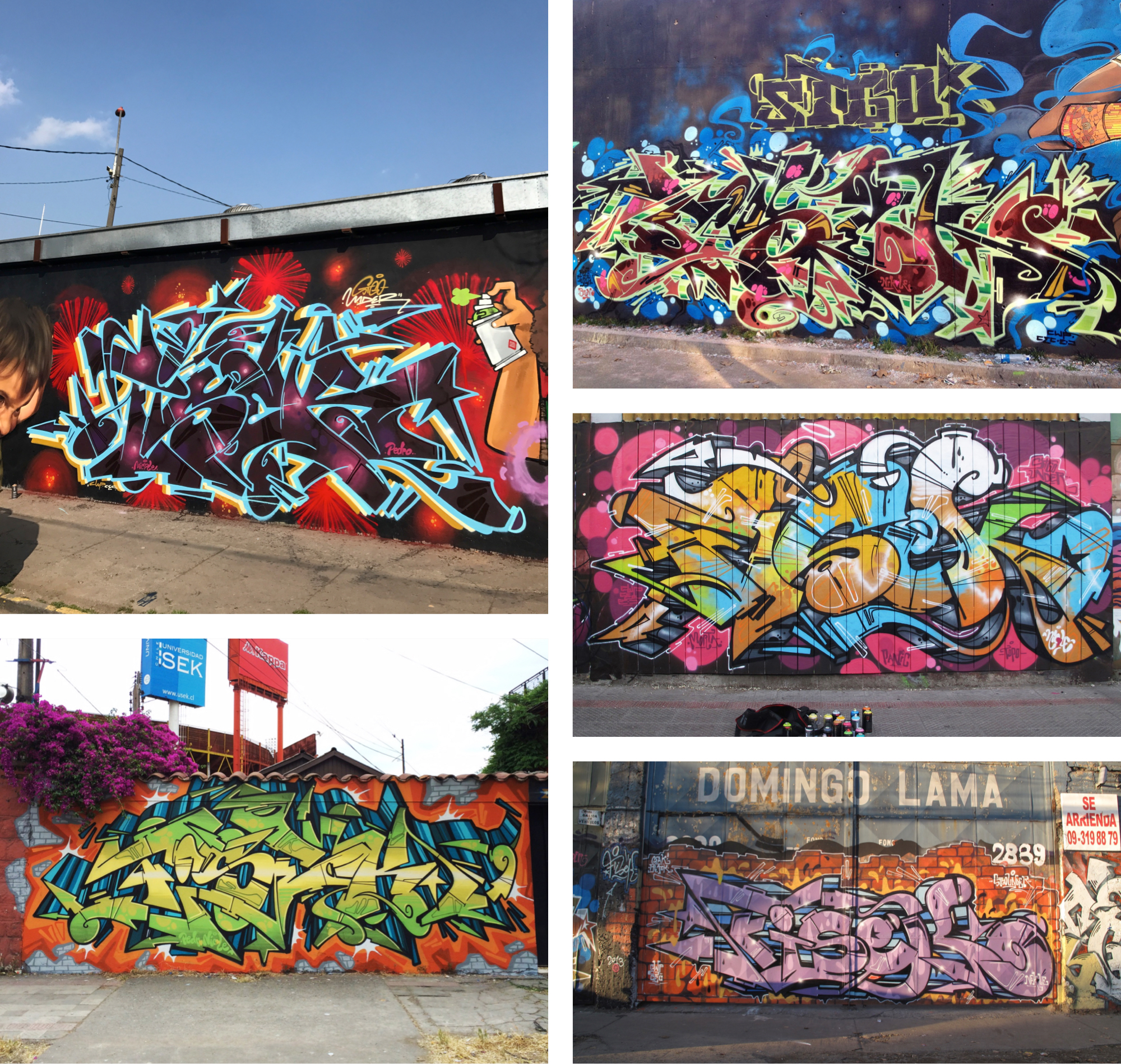 Could you tell us any stories related to your artistic experience related to trains or subways? How is the related situation in Chile?

In Chile it’s kinda hard to paint trains compared to other countries. I respect that scene a lot but that’s the reason I wasn’t too involved in it, but obviously it’s the beginning of it all and I dipped my feet into it a bit haha I particularly remember a trip to New York in the year 2000 and we went on train bombing missions, climbing down towards the tracks using a rope just to get into the Brooklyn tunnels in the dead of winter! It was a cool adventure, we succeeded but then I ended up with some legal problems hahaha it’s just part of the game.

In your opinion, who are the strongest writers ever of the Chilean scene? Any news talents to add on your list?

Wow hard question since it’s a long list hahaha when it comes to letters we have great representatives like Hes and Black who are friends I admire a lot since they are versatile and dominate every different style. 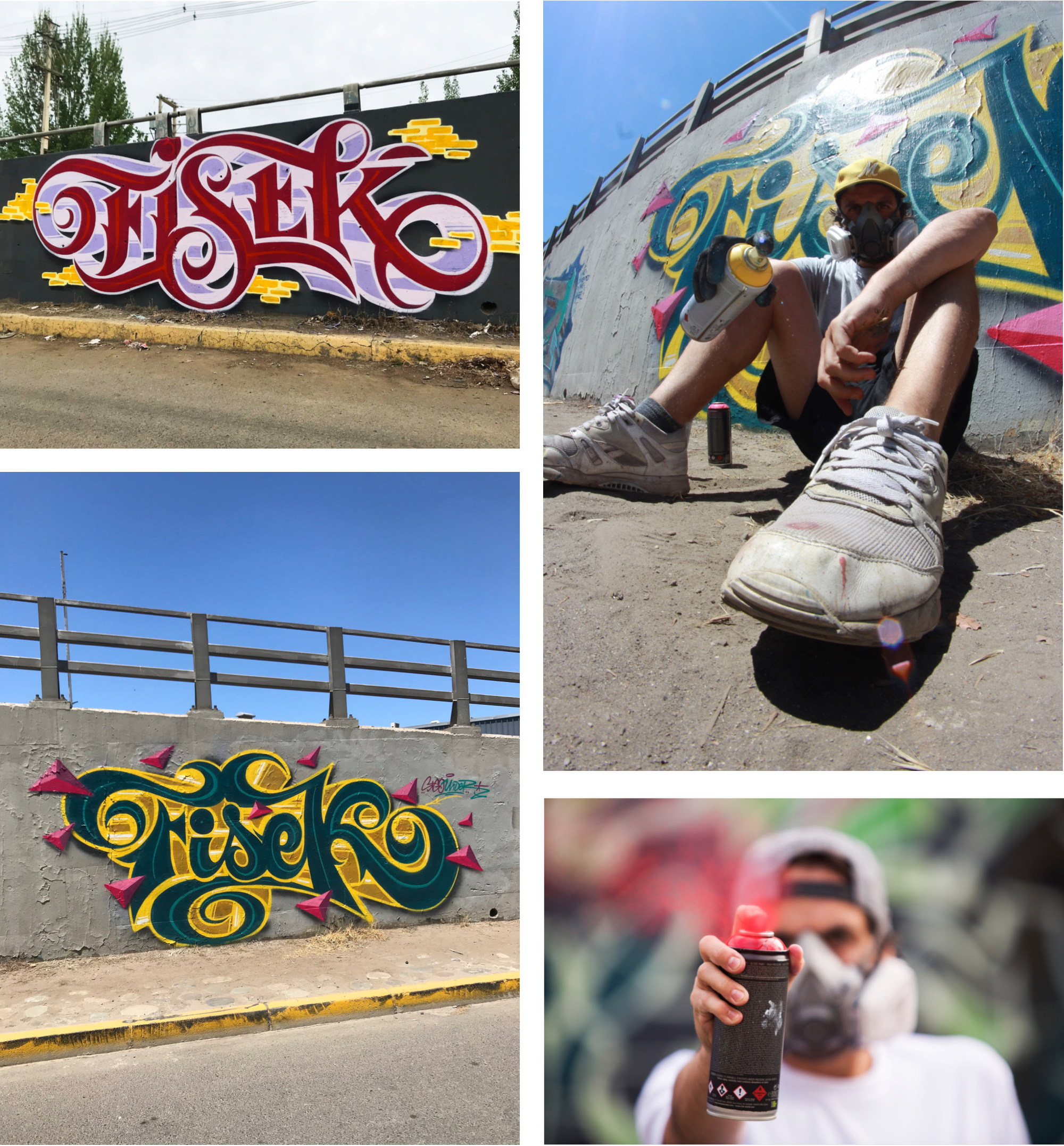 In your opinion, Which are the most important ingredients to choose a new place to paint or while choosing a new piece to make? Do you let yourself be guided by instinct and moment, or do you prefer to plan everything?

It depends, cause many times I plan everything well (place, colors and sketch) but due to street shit happening sometimes, I’ve had to change spots so I prefer to go out freely with many quick sketches to the spot and decide the colors and depending on the risk factor, I decide how simple or complex the letters will be. It’s better to just flow with it!!

Which music do you listen to while painting or sketching?

Daaamn, another hard question… I think satisfactions are: 1) to travel and get to discover new countries 2) recognition and respect from good writers from across the globe 3) being able to continue in the game and continue to feel relevant and wanting more. My biggest ambition is to continue painting until the end of my days hahahaha! 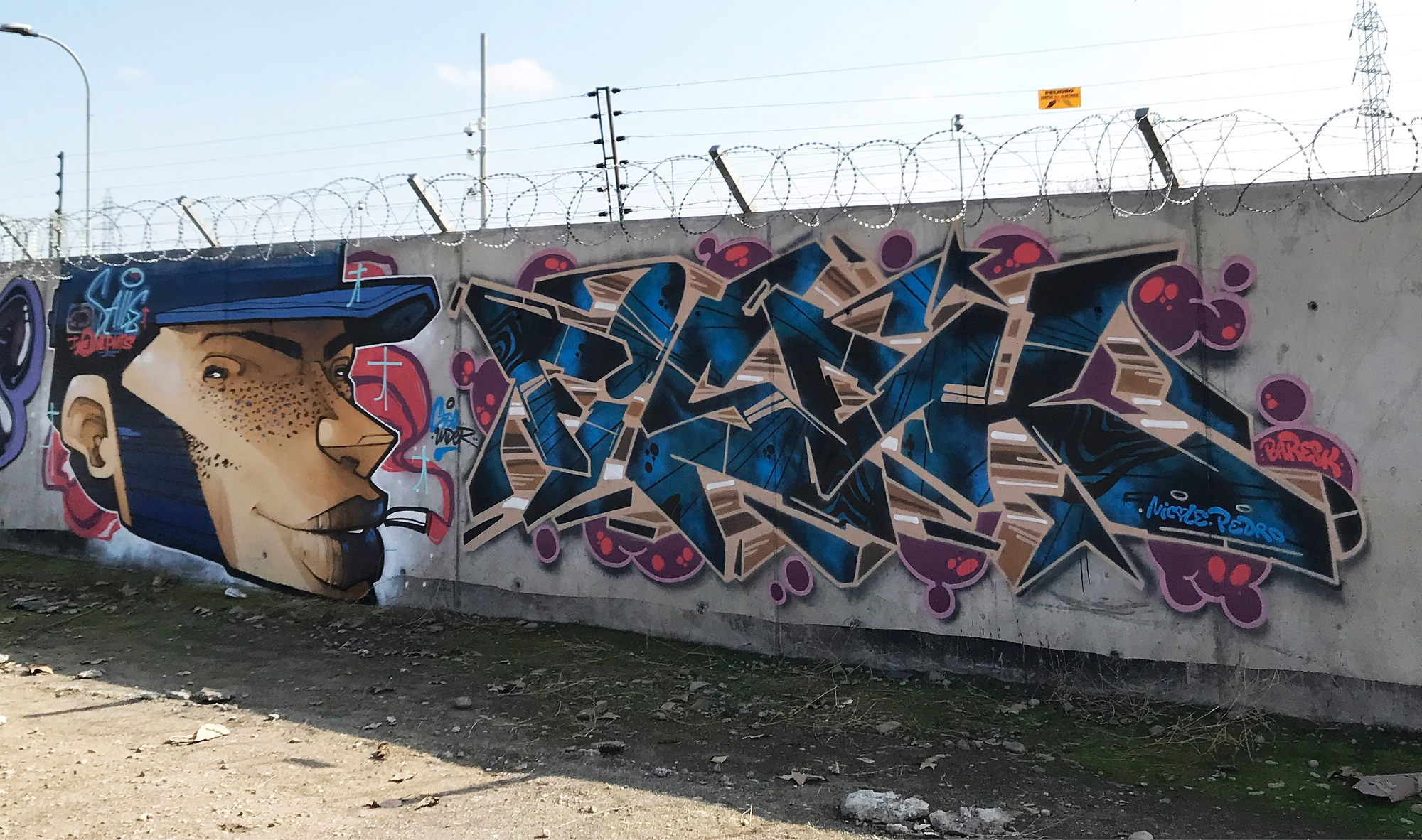