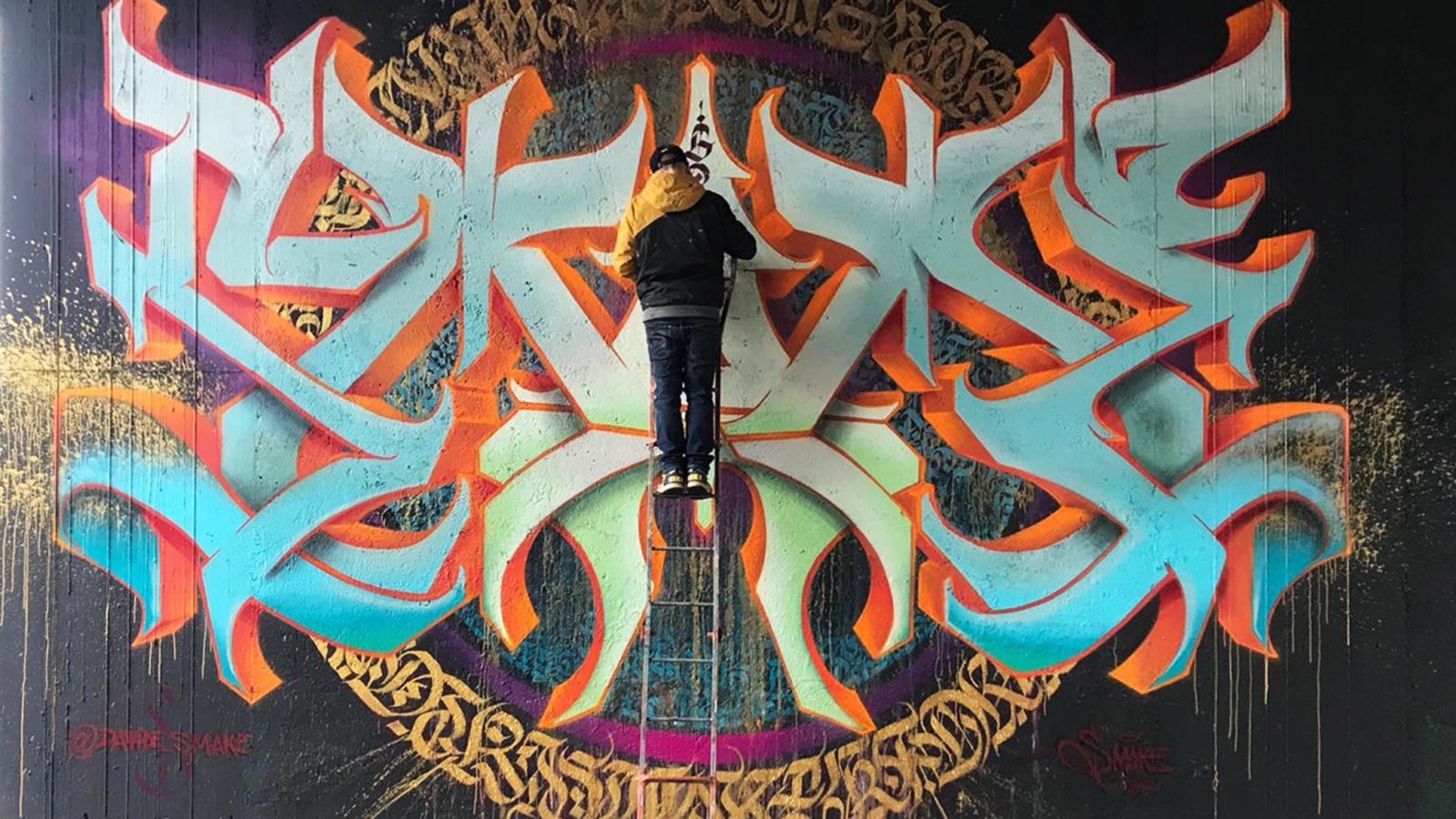 Hello guys! For a start I would like to thank you for dedicating me some space. It all started around the year 2000 when a buddy of mine, whom I used to play basketball with, played me a couple of his rap albums. He was already tagging at the time. I thus discovered the world of Hip Hop and started to practice a few of its disciplines simultaneously: mainly graffiti, breakdancing and skateboarding. Eventually graffiti took precedence. During those years you had to earn your place in a hall of fame, the rules were clear and warranted respect, so I immediately began practicing like hell, on a constant search for the perfect letter. The search continues to this day.

What crews are you in? Tell us about a story, a person or a memory which is particularly significant to you…

I am part of many crews, maybe too many! Some are well known and others less so. I will give you a rundown of those which are most important to me. 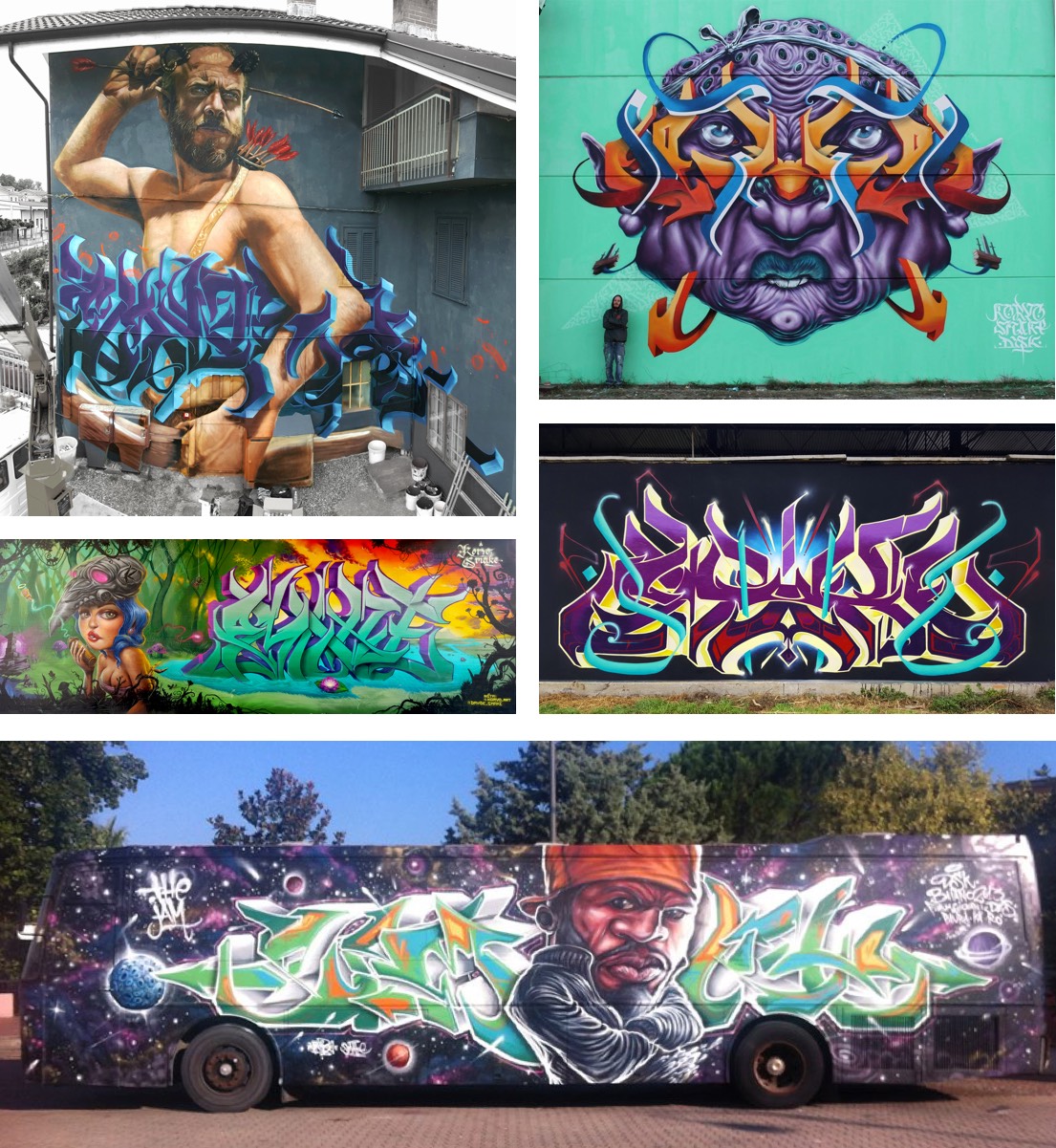 How would you describe your style? How has it evolved throughout the years?

Good question. I wouldn’t really know what adjectives to use in describing my style, I will leave that to others. As a kid I was mostly following the German approach, trying to perfect my wildstyle. Then, bit by bit, I started evolving my own touch and I continued practicing and drawing until I felt it was fully mine. Nevertheless there was, and will always be to some extent, the need for further evolution and exploration aside from sketching and wall painting. Obviously I am satisfied, but never 100% and this is what keeps me going on my search for beauty and style.

Over the years my style has inevitably been influenced, firstly by graphic design and typography, then by calligraphy. In particular this last influence blends very well with graffiti. I have often included calligraphy details in my wildstyles and, generally, when I’m drawing, the sticks and loops I use tend to take on the “flow” of calligraphy. I deeply enjoy the concept of harmony among letters.

How did you first get interested in calligraphy? What impact did it have on your stylistic evolution? What have you learned from this discipline?

I had reached the level at which I couldn’t advance any further in this artform and basically I was bored with my usual routine. I had a job that was well paid but not at all stimulating, I didn’t enjoy it and it was limiting me artistically. I realized I would never truly be happy so I decided to move to Milan, study calligraphy and turn it into a profession. I knew this was a difficult path to follow but only in this way I knew my life would be how I wanted, without wasting talent, doing what I love, surpassing all obstacles through constant practice.

What are the similarities and differences between calligraphy and graffiti?

Well, it’s simple really! For a start calligraphy is primeval, it is defined as the construction “piece by piece” of a letter and must not be confused with handwriting. It warrants a lot of time and practice. One must put together various classic calligraphy strokes in order to create a letter. Graffiti is the opposite. In other words I would define it as the maximum evolution that letters have achieved throughout the years by means of typography, graphic design, advertising. The evolution will continue in the future with new techniques. If you think about it “graffiti” type letters are also elaborated bit by bit in sketches. The creative process is quite similar. Style and technique may differ but the concept is the same.

More of everything! I like to range a lot, in every situation (even outside of artistic contexts) I am looking for all possible instruments and surfaces for writing… it’s like an affliction! (a beneficial disease obviously ahaha..) Generally I use spray paint, paint brushes, markers and rollers and I paint mainly on walls or canvases. However, it would not be unusual to see me writing on the mat in a Japanese restaurant with wooden chopsticks for example…

Tell us about your experience in Gaza… Do you think Hip Hop and writing can have a positive role in such a complicated situation? What is your point of view?

I absolutely believe so. My experience in Palestine has taught me how in any context it’s possible to use Hip Hop culture as a means to get through difficulty and suffering.

I’ll be honest, I was only partly aware of what life could be like in Gaza. We all know that the media tends to normalize reality. I have never lived that particular reality first hand so I couldn’t understand it fully. However, I had a feeling it would go well, I was confident and wanted to give my full effort without holding any expectations. To my surprise the kids responded really well. I’m not only talking about the end results (fresh sketches and ideas to be developed), I also witnessed a lot of engagement in the group as a whole. I saw them getting lost in the colours and letters without having to think of the human folly that impinges on their day to day life. This was the most important aspect for me. Things just seemed to get better as the days went on. 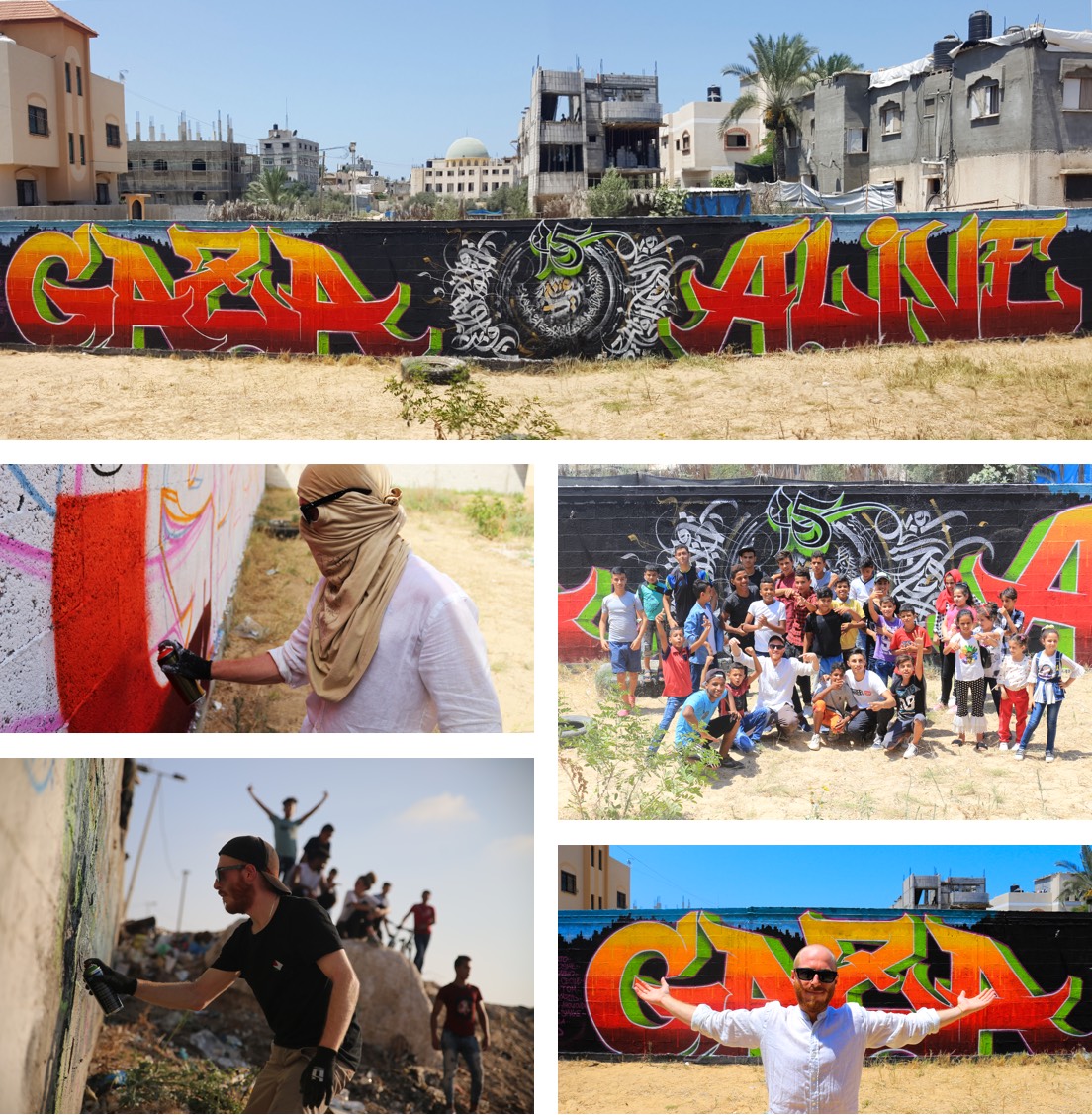 The same thing happened with the Camps Breakerz Crew, actually with them we went even further. The real Hip Hop spirit emerged, an energy that connects us all as brothers even if we are hundreds of kilometers apart… HIP HOP WORLDWIDE!

It was a great achievement on a personal level as well, as I proved to society as a whole that graffiti is effectively a discipline that helps the youth’s development, therefore I can say these last 20 years have been well spent. I hope to repeat this experience in other countries all over the world, wherever it is needed. Meeting and helping as many kids as possible would really make me happy, but I know it’s not that simple.

Have you painted in any other countries overseas? How did you fit in with the local scene?

I have often painted in Germany at the Meeting Of Styles, there I was able to encounter part of the scene and exchange views. What can I say, I had a fantastic time and experienced great vibes with them. They are professionals in graffiti and organization as well and I greatly appreciate that. However, personally, I prefer the Italian shambolic way! It makes me feel at home!

In Italy are there any social or cultural activities you are participating in that you want to talk about?

Yes, I would like to tell you about the Draw The Line Festival. It’s a street art event I have been organizing since 2011 in Campobasso, with the Malatesta Association. This association is mainly involved in outdoor activities like climbing, trekking, cycling, snowboarding and surfing but since graffiti is a shared passion with two other members (Desk and Sopa) we decided to set up small events since 2007-2008. In 2010 we won a national bid with our project and that enabled us to invite more than 100 artists from Italy and overseas.

After that we never stopped, even though we are self organized and self financed we managed to bring big names like Blu, Erica il cane, Roa, Peeta, Vesod, Macs, Made514, Dado, Etnik, Sera, Joys, Reser, Milu Correch, Zed1, Andrea Ravo, Gomez, Alleg, Truly Design, Hitness, Mr.Thoms, Blef, Mr.Wany, Korvo, Mr.Blob, 2neko and many more. In this way a small city is becoming an open air art gallery. I strongly urge everybody to visit it, we have big plans for 2021 when we will be celebrating our first 10 year anniversary.

Once again thank you and compliments to ThrowUp Mag.. .BigUp!