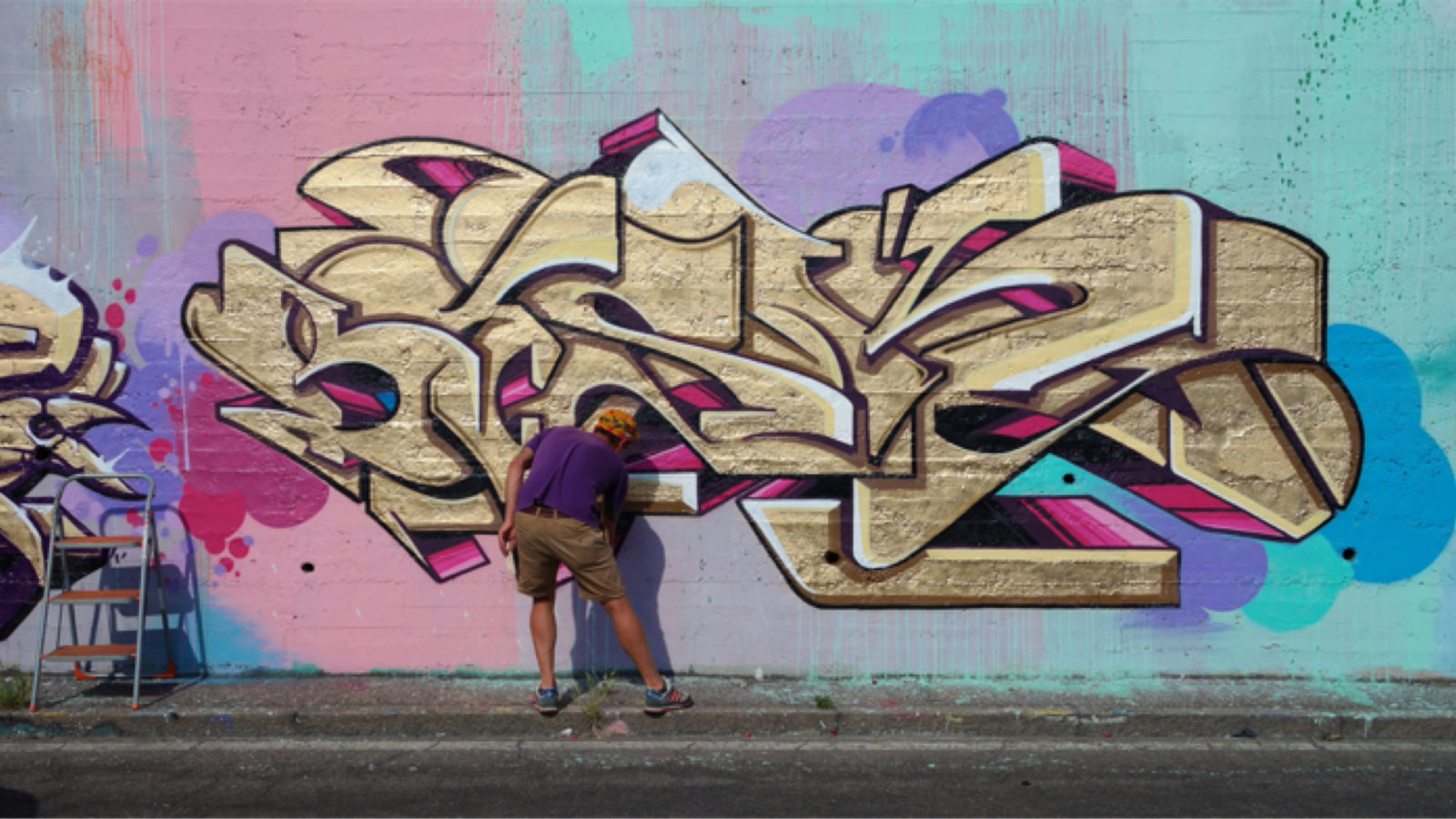 Hi Blef! First of all, thanks a lot for the time spent for the interview. It’s an honor or us In the early 90s , at the time you started to paint, we believe not many people were into this world. Can you give us an overview of the Genoese / Ligurian scene of the time? Which were the most representative names and crews in those years and how did you get to know them? Anyone did you get particularly attached to?

In the early 90s I started drawing on walls, I think was in 1992. I certainly had a lot of fun, I drew everywhere and all of my gestures were also observed by other guys who, despite me, had already come into contact with the Hip Hop culture and they were aware of what they were doing. I also began to gain awareness after meeting some writers in the Hall of fame of SID. “VIA 0I0” was his crew while at that moment I didn’t have a name yet. I used to write words and phrases, I drew puppets, but I still didn’t understand the importance of choosing a name. After a short time I chose SIRK, then KRIS, until in 1996 I started writing BLEF.

One Saturday afternoon we went to write our names all together under a bridge and from then on my life changed. I gradually learned to understand the language of writers even if it wasn’t easy. I realized it when I met other people around the center of Genoa. I didn’t think there was such a developed scene / culture that’s why at first I was almost terrified of it. The people well known at that moment were very few.There was a turn over as some of them disappeared while others approached and became part of the group of Writers that was coming up. Looking back I can say that a lot has changed; however almost 30 years later I’m still here drawing and having fun as I did when I was 16. 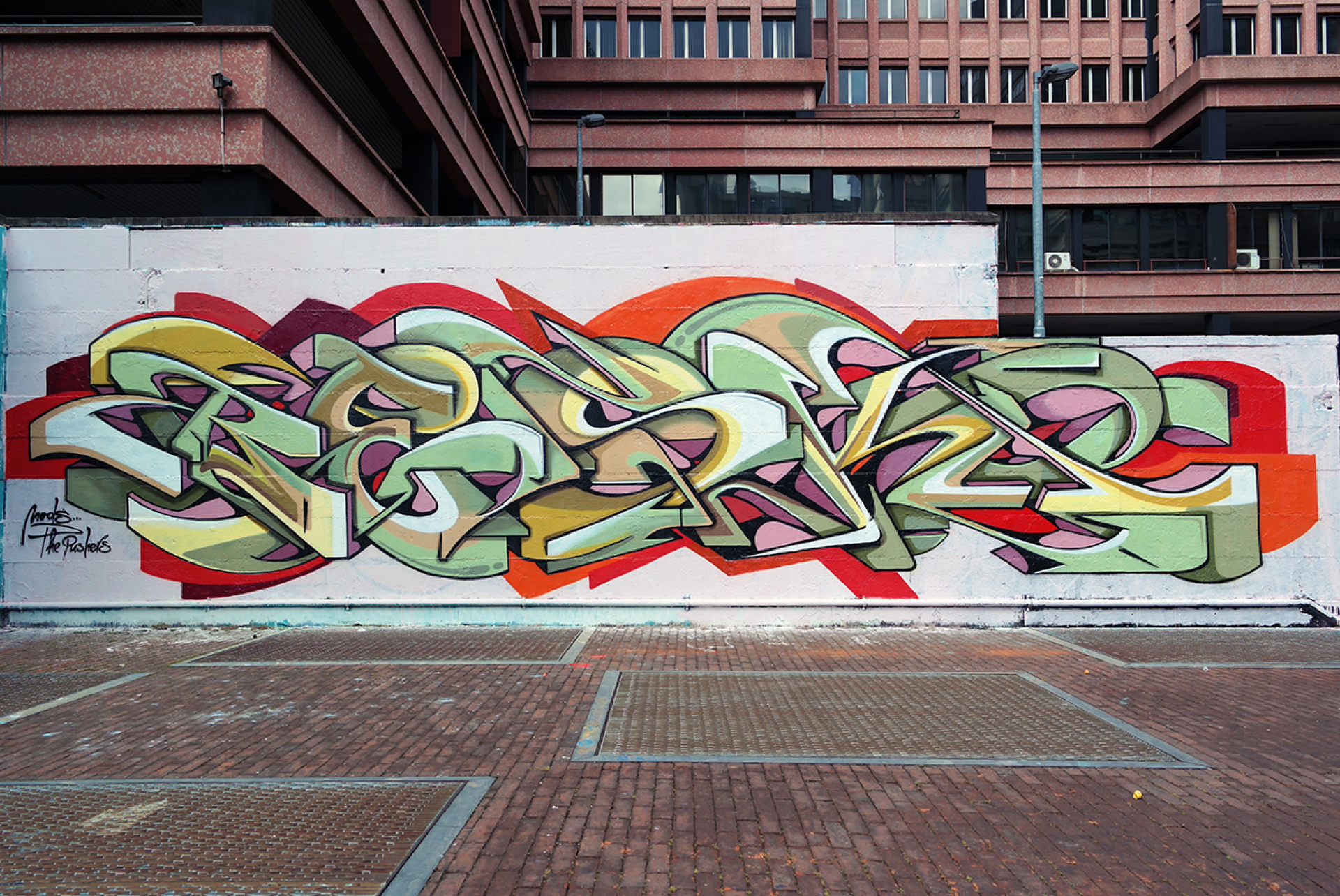 Before getting known around Italy (and beyond) with the name Blef, you had other tags experiencing other letters. It’s right to say that the choice of this name represents not only a starting point but also the completion of your first artistic career or these changes, like many others, were dictated by reasons of “security” and ” anonymity “?

It’s hard to choose a name that represents you. As I said before, in 1996 I started writing BLEF and it was already 4 years since I started painting. I also choose other names in addition to those already mentioned: KROS, HOME, HOMER, GEBS, but those choices were made in a rush and, in addition, each name seemed to be really close in some way to other writers becoming not good. I chose BLEF because there was no one else with that name. In the meantime I gained some experience and I was ready to make a qualitative leap: I was already able to design letters in wild style without too many problems and so I prepared a BLEF which I painted in Acqui Terme. From then on I painted a lot, piece by piece, in a continuous growth of quality and quantity.

How important are the study and the “dues” in the journey of a graffiti writer and what are the requirements to achieve to be defined a proper “graffiti Writer”?

Both things, study and dues, are really important. It takes time (a lot), dedication (total), luck (which doesn’t hurt), but above all of it there is the respect for what you do. My technique and the fact of choosing colors in a thoughtful way have always characterized me. If you ask me, which are the requirements to achieve to be a good writer they don’t exist, neither then nor now: it’s something too subjective. 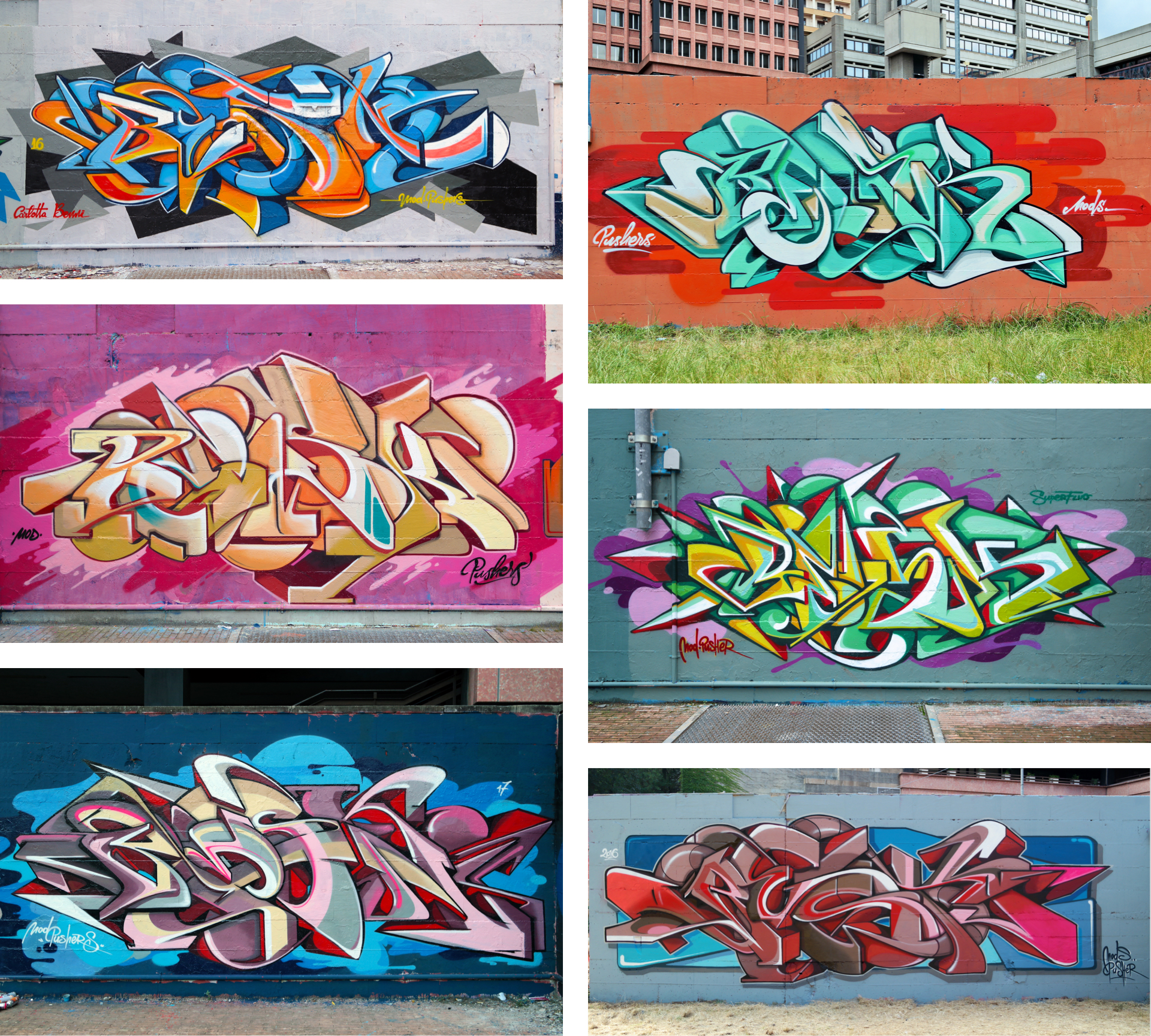 You were without any doubt one of the most active writers ever in Italy as your trains were everywhere… I guess you haven’t counted them, but just out of curiosity, do you have an idea of ​​the amount of panels painted in your career? Do you agree that quantity is one of the fundamental requirements for judging the value of a writer. Why

I’ve never counted my trains. Painting a lot was the norm, the constant search for style and perfection required it. All this was so important that materially I didn’t have time to finish a panel that I was already thinking of something else.It doesn’t matter whether it was something bigger like a whole car or an end to end or something more complex like a wild style, or more spontaneous or simple like a bombing. However, I don’t think quantity is something important as in my opinion quality and technique are much more important.

Have you ever wondered what made you paint so much? Was it just an escape, an adrenaline addiction or was your business dictated by that healthy competition that ran between the crews? Has this competition ever degenerated into arguments or unpleasant episodes or has there always been mutual respect and esteem?

The need to “find an escape”, the feeling of well-being that gives you the adrenaline when it enters the circle, the desire to improve and grow have led me to tackle the path of a writer as I did. Surely all these factors motivated me to do a lot and do it better, but it has affected a lot my cultural background and my life experiences. I can say that I managed to channel my energies towards a purpose and use them to create something positive, in this way the graffiti writing saved my life.

Of course, competition is another of those factors that are fully among the stimuli that push you to do better and to give more and more. I mainly observed the Milanese scene and I felt somehow in competition with it. To compete has always been a reason of growth for me.

The first crew that comes to mind when we think of your name is obviously the MOD (Master of Disasters) but you have also been part of other crews such as PDB and 2D along with Dafne … Tell us a little about that….

With DAFNE we were 2D, the Dynamic Duo. I remember those years as a wonderful period. Together we smashed EVERYTHING. We were both young even if she already had a lot of experience and this was an important lesson for me! In PDB we are some Poco Di Buono united by historical ties. It includes some of the writers who have most marked the evolution of graffiti writing in Italy, one above all, its founder Sir 2. The MOD, Masters Of Disaster, linked me with some of the best writers in the Veneto region and its surroundings: FAKSO, ZUEK, CENTO, RES, RAME and NEO. It doesn’t matter that many of them no longer live in Italy or are not as active as they were once; together we literally screwed it up.

Last, just in order of their birth or my membership, the crews PUSHERS, SUPERFLUO and PUF.

In Italy probably there ain’t many yards in which you didn’t take place … How do you choose them and what was the first approach to a new yard? Did you prefer to study them carefully not to be caught unprepared in the event of an escape or did you wait for the right moment, throw yourself away and go in?

True, I’ve painted in countless yards. Surely in some cases I had contacts with local writers, but in principle I’ve always decided what to do for myself. I’ve always been vigilant and active to decide while I was among the tracks. It’s mindset. With some graffiti writers – my MOD crewmates, but also others with whom I shared several “hits” in the yard – I established over time a relationship of trust and harmony that has always allowed us to better manage situations. I’ve also painted abroad, almost alone, and if it happened it was exactly because I know how to “study” a place. The more you experience and the more you learn to move better; my speed of execution was another of those elements that has always work out for me. 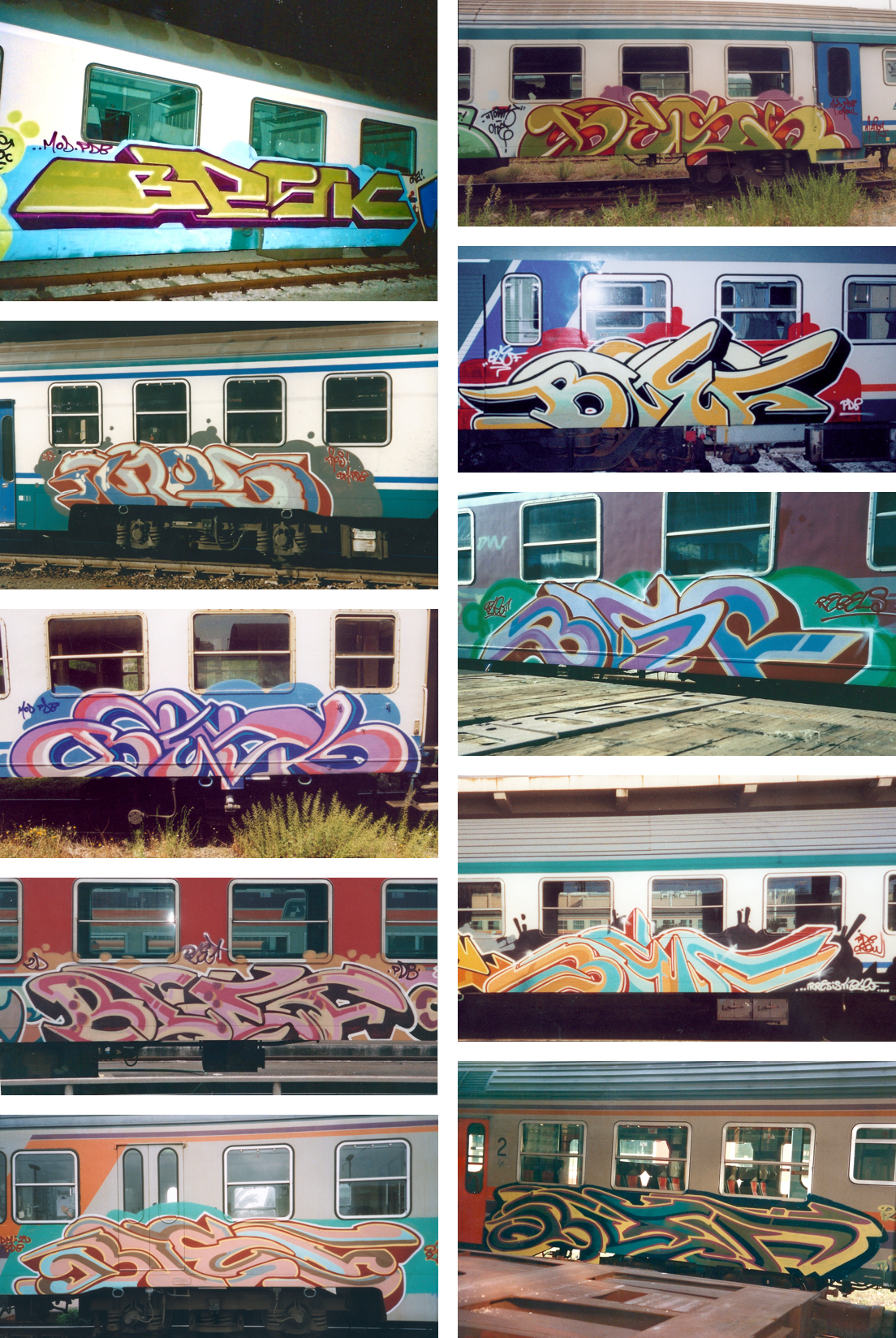 Is there any anecdote of the yard that has particularly impressed you or that has indelibly marked you? If I am not wrong someone said that you were also shot once.What did you feel in that situation? Have you ever been caught in the act or have you always managed to escape?

Fortunately, I’ve never had any major problems and I’ve always moved well, even if I get into some difficult moments. More than one. Among the many, I remember this episode: 25 years ago I was in Rome to paint and at a certain point we had to flee. There was a chase by the police during which some shots were fired and two of my graffiti friends were taken. Fortunately, I managed to escape and hide in a place with Panda, another writer that was with us. After being hidden for a while, we went back and met Daphne who told us about the epilogue of the two mates taken by the police. I remember being afraid because an investigation had been launched which luckily ended in nothing.

In recent years, with the growth of social networks, style has failed or better, a certain style. The global influence crushed the stylistic peculiarities of the individual scenes, without counting that we’ve seen a general flattening of creativity. Many writers have chosen a different path, many have stopped and for this reason the advent of social media has accelerated a negative trend. At least that’s my opinion and I don’t think it’s completely unfounded.

All the time passed since I started has literally flown by, a number of things have happened that I never imagined. I faced them as a writer and as a man, always trying to give my best. Sometimes it’s important to stop and put all the experiences in perspective. It helps to do better and not to forget their value. Collect them, make sure that this “baggage of expertise ” can help me and someone else: that’s my project. I hope I can make it happen. 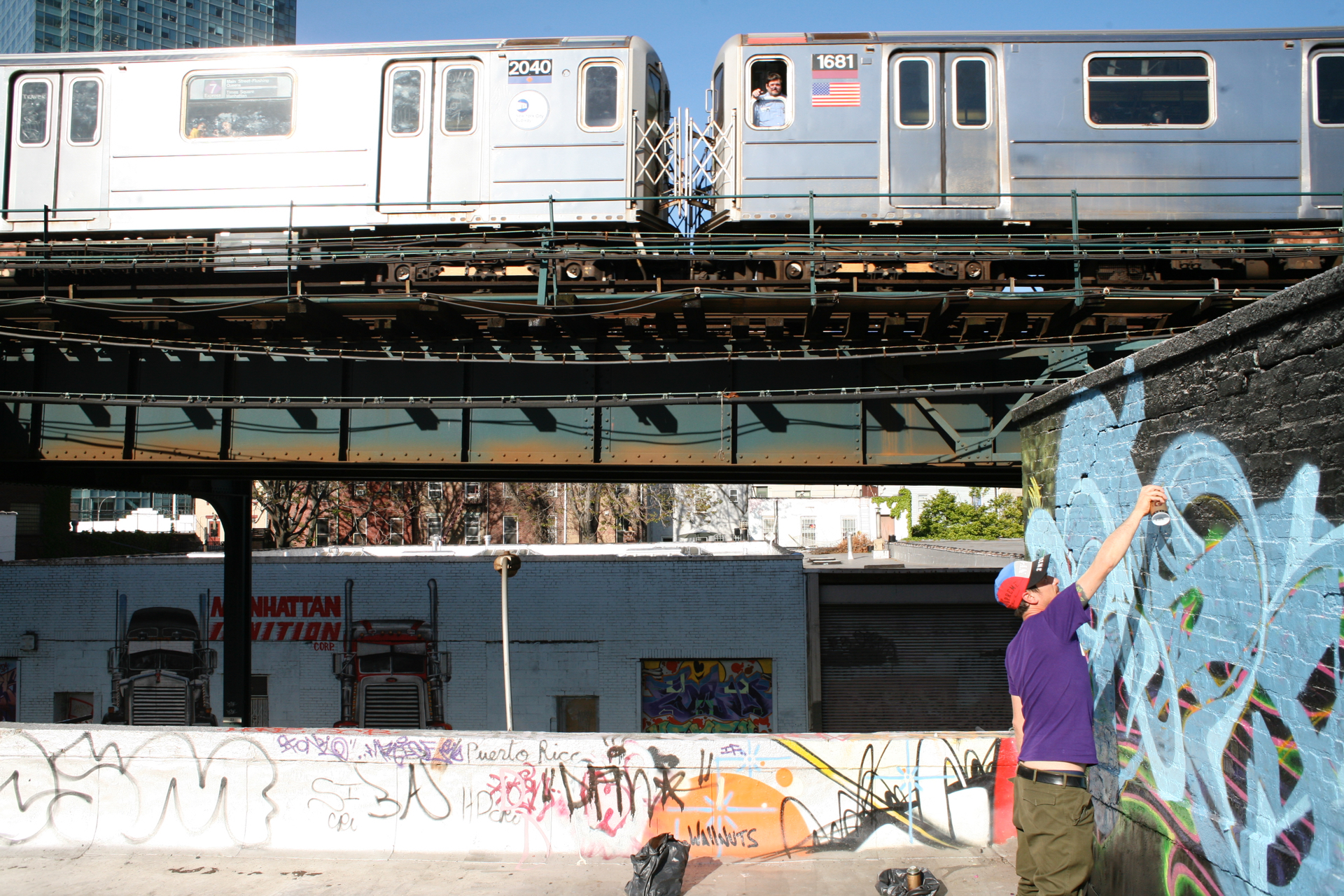