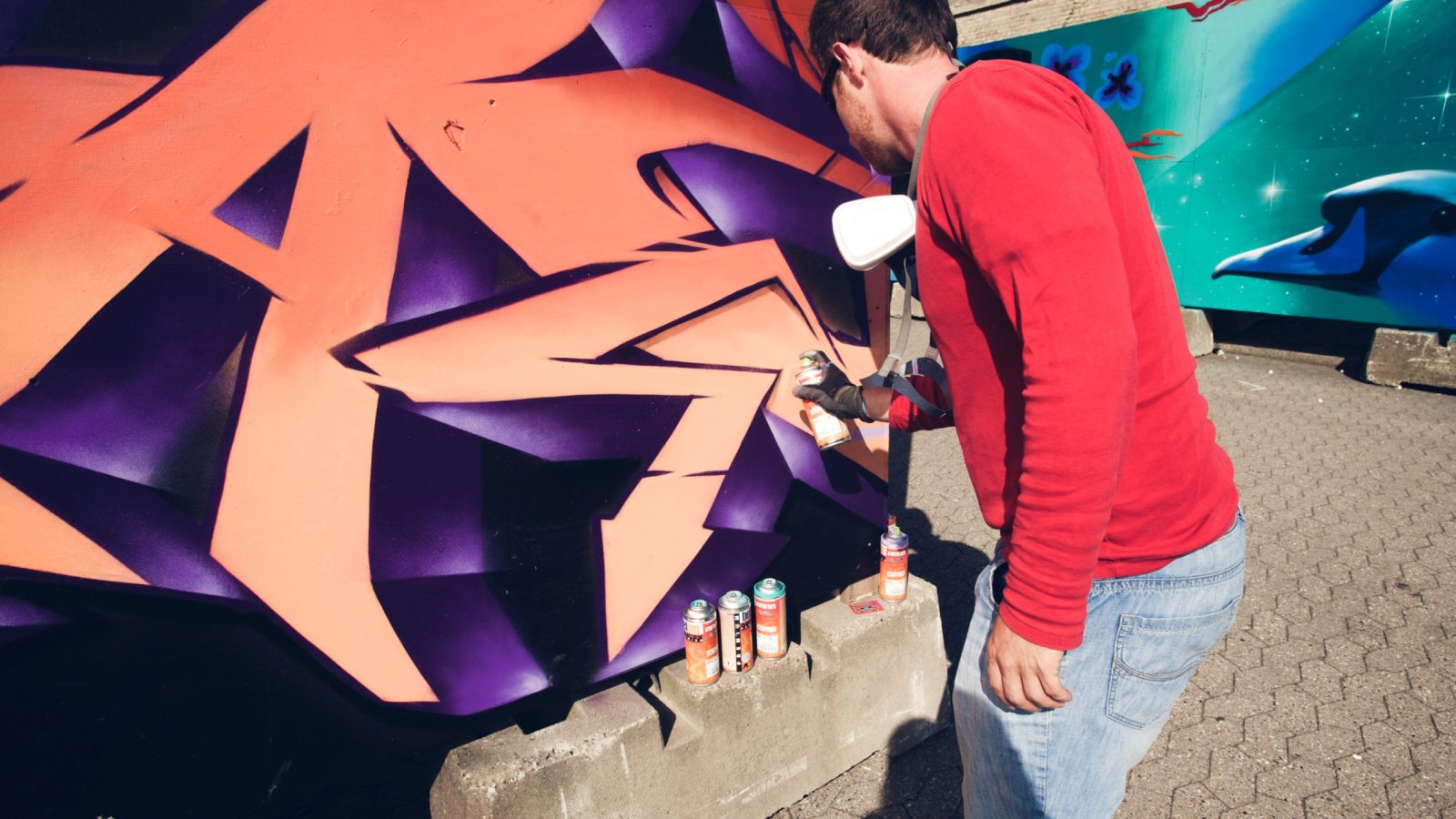 Hi Kaser! Thanks for your availability to answer some questions! We’d like to start by asking about your beginnings as a writer: When and why did you start? Do you remember where you made your first walls and which feeling did you feel?

Born and raised in the late early 90ies in Berlin,Germany, i got in touch with graffiti when I was 12 and developed a passion for sketching in my early years. When I was in the 4th grade, there was a graffiti workshop at school where I started to paint letters on paper and dived into the world of lettering and styling. After a while, 3 friends from school and me wanted to paint bigger and trying out how it feels to paint with cans on walls. So at that time, the only way to get cans were construction markets. So we got there, each one bought 2 shitty, overpriced spraycans and jumped at a wall. It was a busy street and I think it was half legal. Anyways, of course we produced holy crap, but we were excited and the love for painting with cans was born. I felt like I want to get better, so I was checking streets and hidden places for inspiration of other sprayers. It was the era before internet and smartphones and I just had a photocamera with 36 shots and magazins. 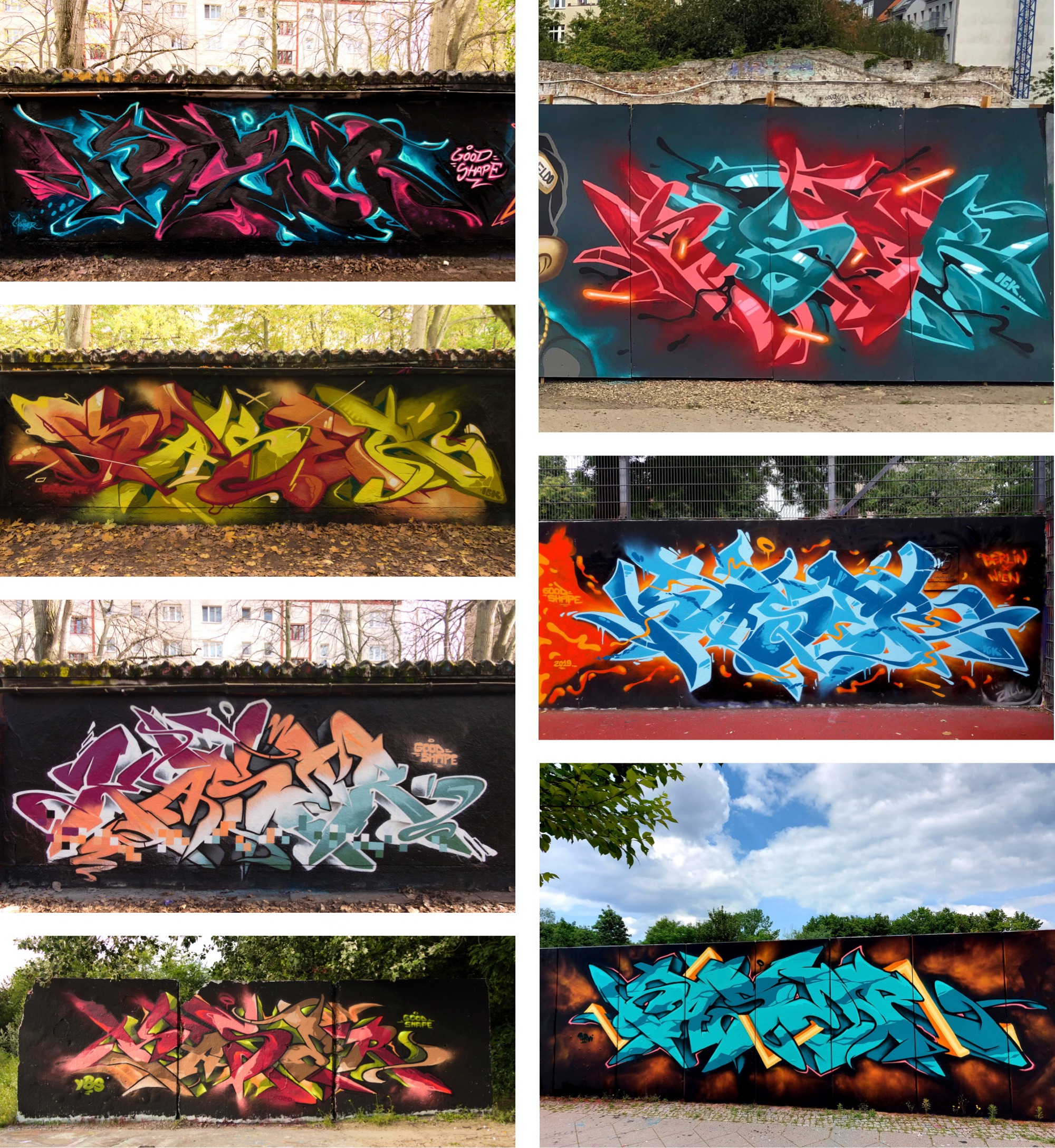 What is the main aspect of this culture that struck you the most and took you to be part of it?

Art was always something i was really interested in. Especially the freedom to paint whatever you feel and don`t care about people`s judgements. Also beeing anonymous and the mystery behind great stylers. Who is it, how did they paint that roof and how would be the people behind the styles? The expression and diversity of that subculture really catched me and i wanted to get deeper in it.

How did you choose your stage name? Did you also use other monikers in the past?

In the beginning i was looking for letters which fit well and sound nice. So after painting the usual suspects (Kaos, Storm, etc), my first graff pseudonym was Kase, sketched it for 2 years until that one morning where i was about going to school by metro, there was rolling a whole car by Kase BAD in front of my eyes. It was clear that i have to change my name, but it was a struggle cause I liked the letters and their combination a lot. After a couple of weeks I added an R and felt super happy. Its even better than Kase. The symmetry caused by the uneven number of letters put it in balance. Back in the early 2000s, I painted more and more Kaser styles and was part of my first crew called RSK. We experienced street bombing during holidays and were living in a parallel society. A classic period for young Berlin writers.

Which crews do you belong to? What do their names mean? How did you become part of it? Who are the other members?

Back in 2016 i started my social media page on facebook and after sharing some of my sketches the crew IGK (international Graff Killers, Ink Game Kartel) was asking me to join them. It is a conglomerat of several very talented graff writers from all over the world and i was proud to be a part of it. Imken from Denmark, Sikoh from GB, Rezl from the Netherlands and so many more. There were more than 40 writers from more than 20 different countries and they shared so much positivity and encouragement. So in 2017, Imken invited me to the Prison Ink Jam in denmark , which was my first participation in a graff jam and we painted a prison related concept wall.

Beeing placed in Berlin, i painted more than 450 walls in the past 5 years and my local buddy Zorn was joining me a lot. So we founded Team Goodshape in 2019 which is a tag team crew and started it just for the fun of it. In early 2021, me and Zorn were painting together and a guy was passing by showing some love for our work and was inviting us to paint with him… it took a while till i joined them and after painting 2 walls together they asked me to join the N3M crew (New 3ed Eye Movement, Noch3Mollen). Consisting of 10 writers with a nice diversity in styles and also 2 character writers, we produced big concept walls. They encouraged me to paint bigger and also introduced me to document painting with timelapses and video shots. I really apreciate beeing among of like minded artists where each one teach one. Thats Hip Hop. 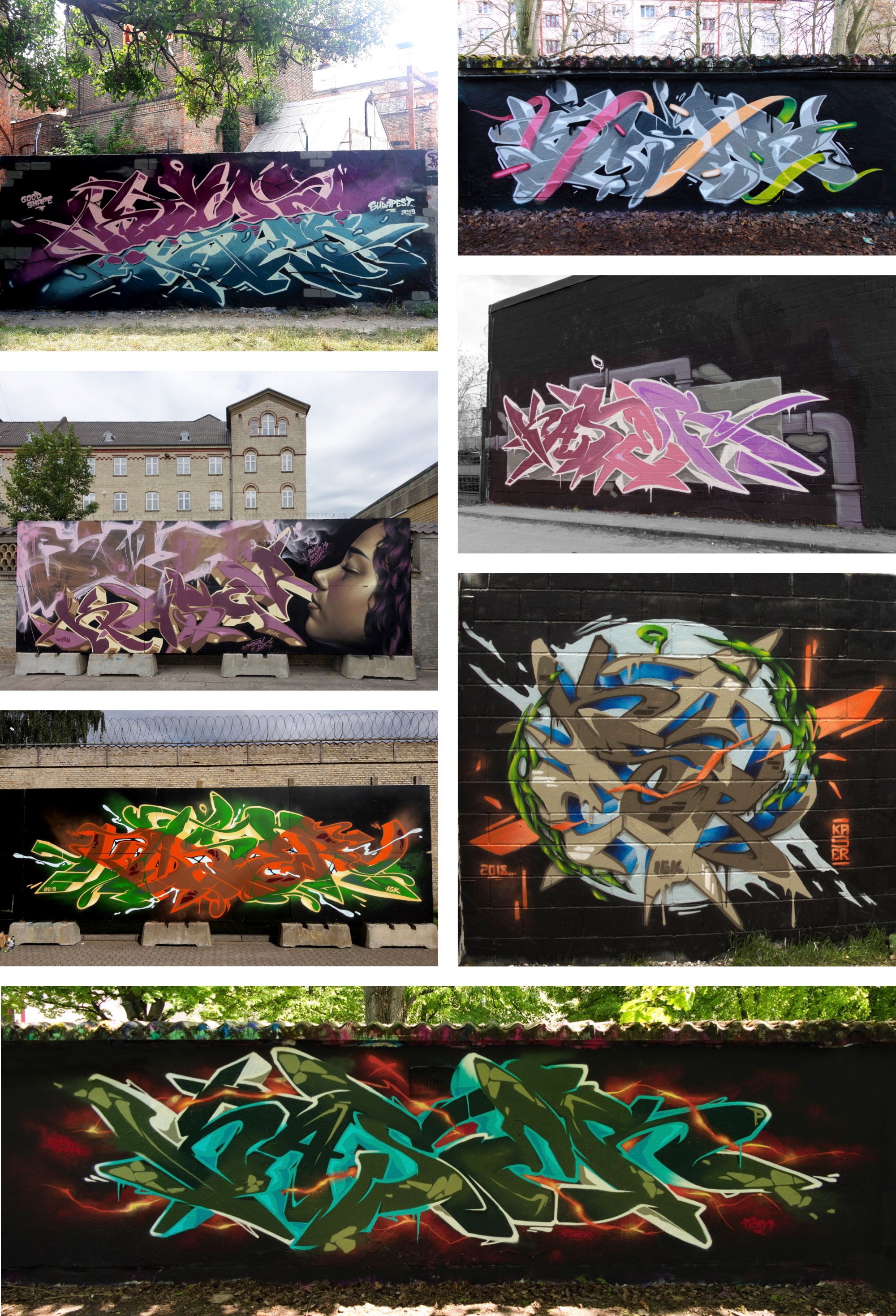 In addition to walls, did you also paint on trains or other supports? In your opinion, which are the main differences you could encounter approaching different supports?

Yes i painted a train, but nothing to show and also i figured out i wanna spend time to paint clean pieces and having breaks in between and developing styles at walls. That adrenalin and action part is not really made for me and thats ok. I appreciate the love and efforts train writers have. I once painted a plane in Bangkok Thailand, that was a crazy experience and also a one time in life chance. It was special cause the surface is round in vertical axis, so you have to get used to it painting lines on that support. That picture is definetly one of my all time favourites. 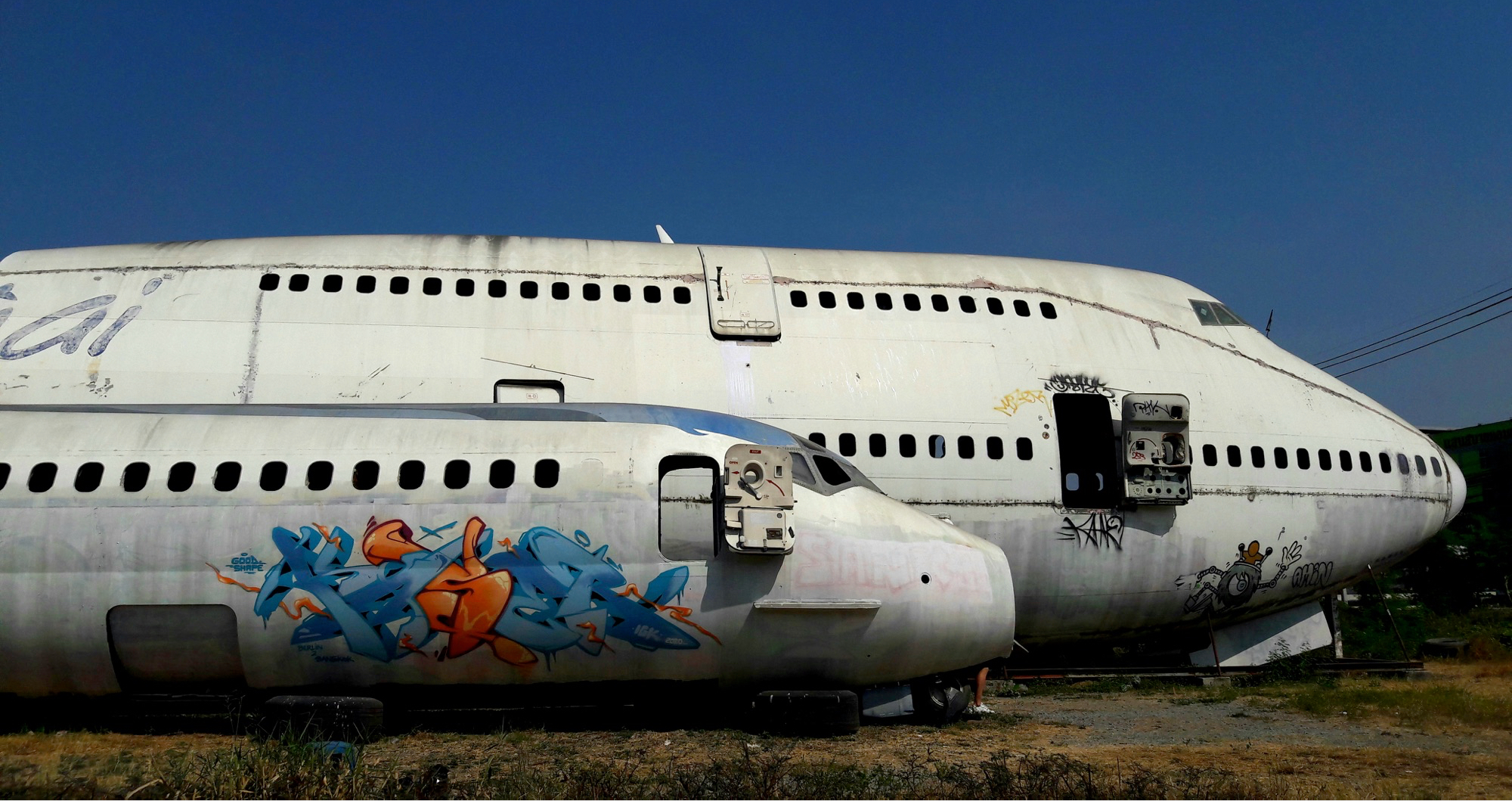 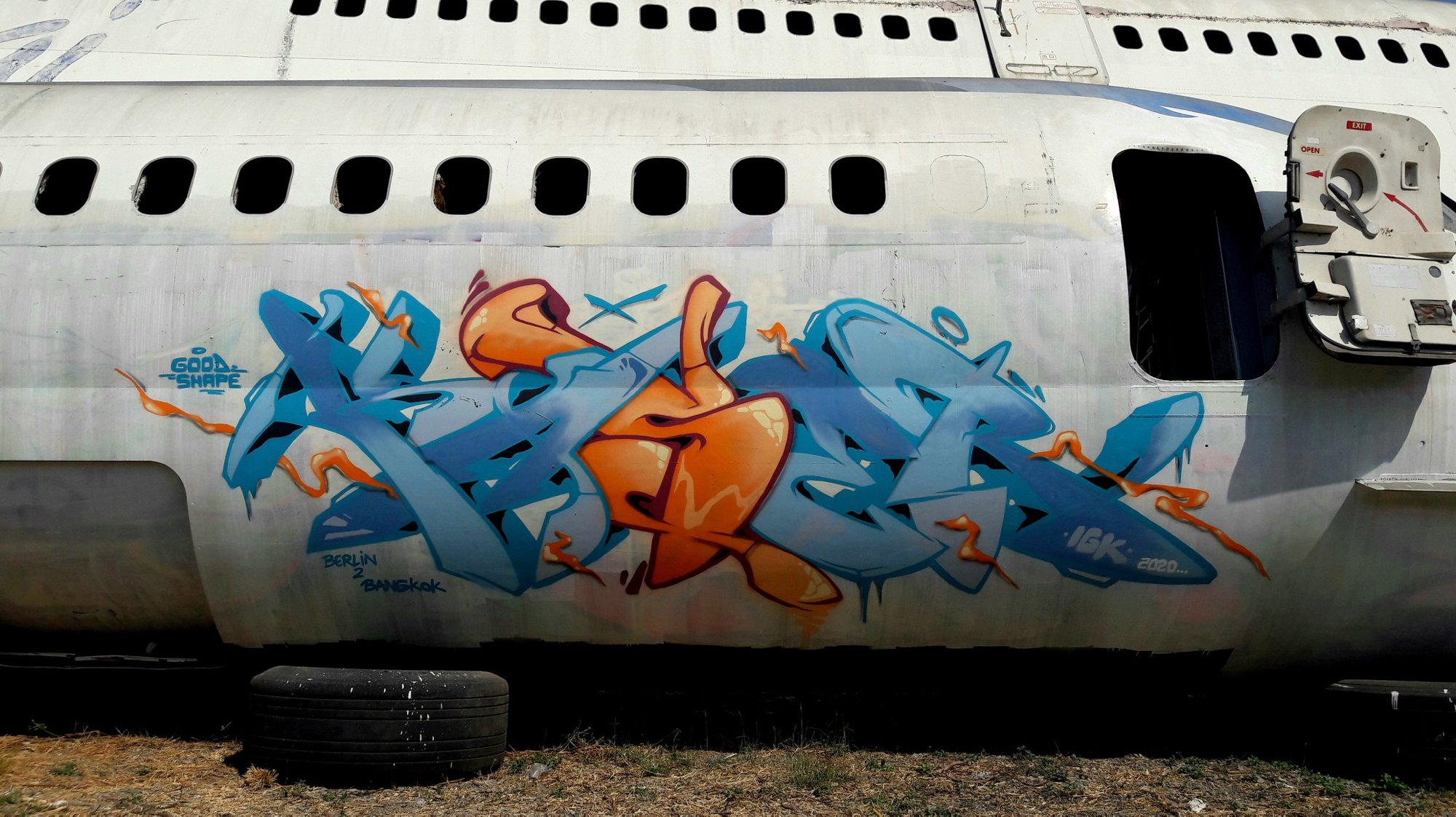 How did your style evolve over the years and who have been the most important sources of inspiration during your career?

When you paint 2 pieces every week, you dont see much progress in your style. But when u look back what you painted months ago, you can see the differences. I wouldnt name a special artist who inspired me a lot. I get inspiration from everywhere: graff writers, fine art, architecture, films and cartoons. I think its important to get also inspirired by nature and non related art themes.

In your opinion, who are the strongest graffiti writers in your city?

Berlin has too many strong writers to name them all, personally it changes for me with time. There are some writers i like the colorshemes, but not the letters and vice versa.

What keeps your desire to paint alive over the years? Would you like to experiment any new technique or style? Which one and why?

I think that beeing the biggest critic of my styles keeps my motivation alive. If you are never really satiesfied there is still room for improvements and so many things to try out. For example, painting the same style i did 3 years ago with the skills and mindset from today leads to see your work with different eyes. Thats a nice task i can recommend for others too. 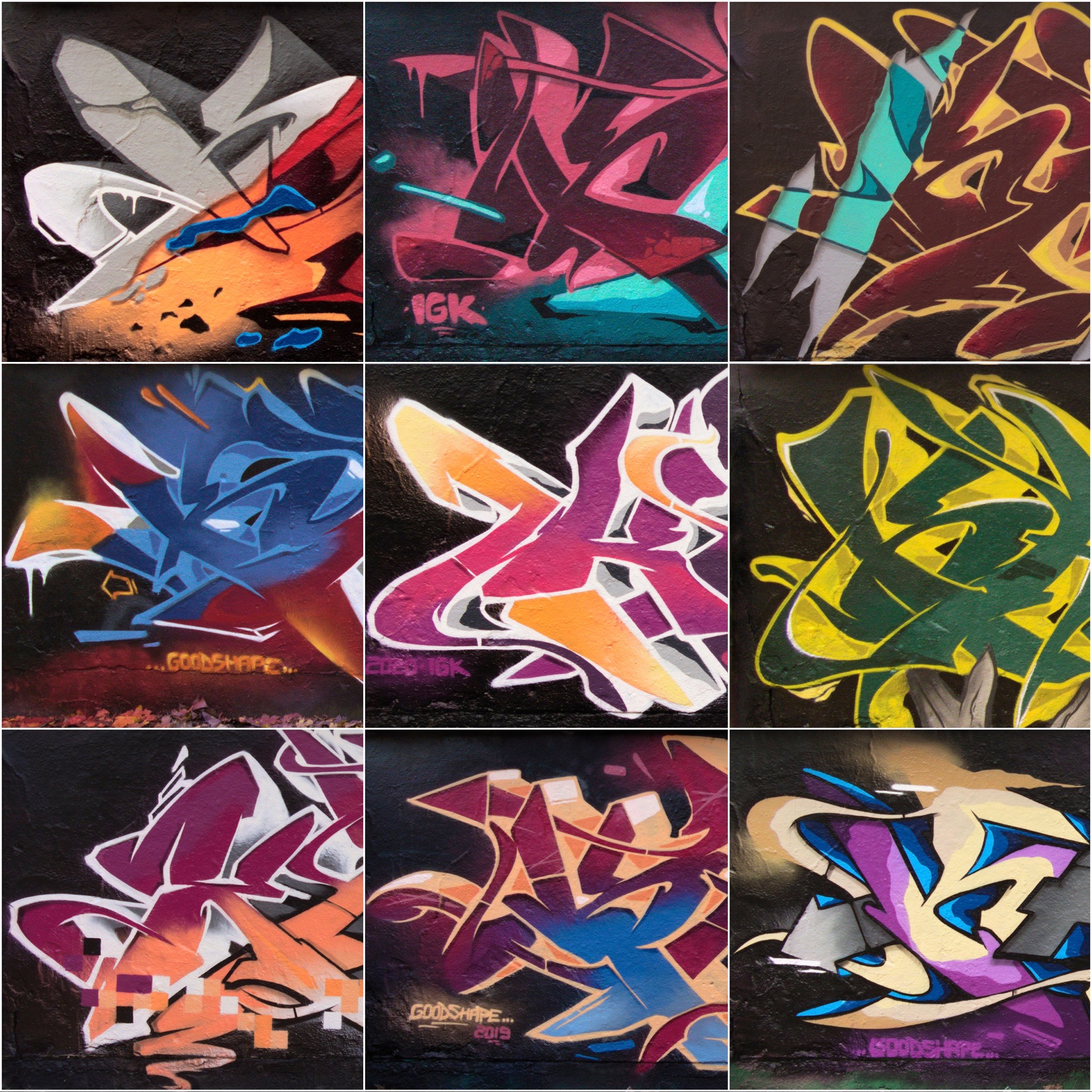 Who is Kaser outside the world of graffiti writing? Which are your other passions and occupations?

Im a graff addict but also enjoy days without talking about it or practicing it. The balance keeps the motivation alive and also knowing that creativity is an energy which is not always around. So I am playing soccer once a week, doing yoga regularly and enjoying hiking and travelling.

Do you have any links with graffiti writers from other countries? Did you participate in any meetings and graffiti Festivals? Where was it?

In 2018 and 2019 i was participating a lot of graffiti jams and Meeting of Style where i made some awesome connections to other writers from all over the world. I attended to the MOS in Denmark, Kosovo, Canarian Islands, Bangkok and Madrid. In 2020 there was suddenly canceled a lot of jams i was planning for to join, but i was very happy to be a part of the great organized Together Jam in Wels, austria.
I also attended some smaller jams in Germany and i love seeing that these jams growing bigger and bigger and also the acceptance for cities to make them happen grows.