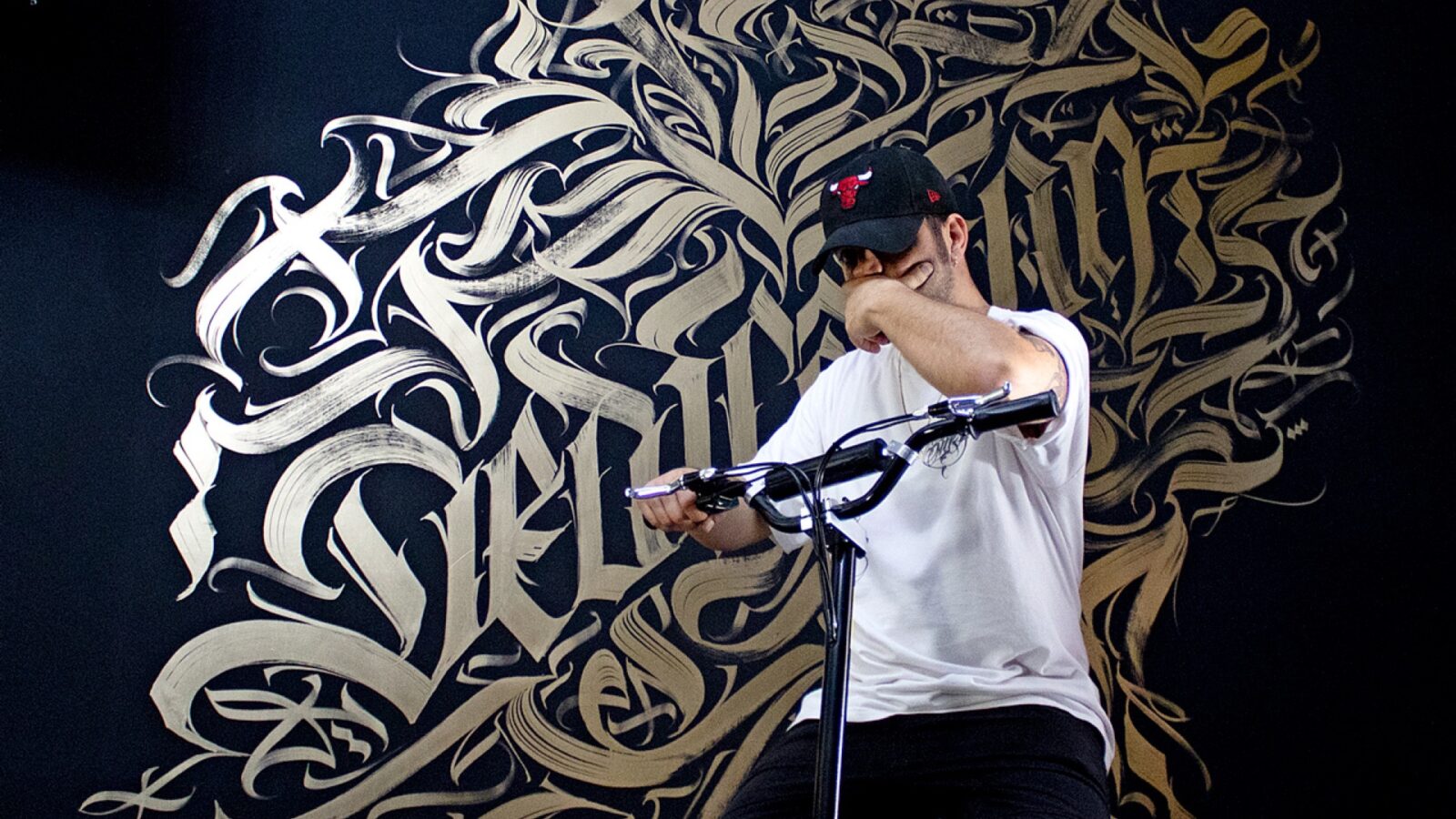 Hi Warios, first of all we thank you for the availability for this interview … We would like to start talking about the actual moment: how are you and how did you live this period? How has it impacted and, conversely, inspired your art and your work?

Hi Guys, Thanks for the space you dedicated me. This period as we all know is shit, many people are experiencing bad times from various points of view. Personally I have not stopped in front of the difficulties as I am working on various projects that will see the light soon. For this reason “stay tuned” because you’ll see some good ones …

Going back to your origins as a writer, when did you pick up a spray for the first time and why? What are the experiences in this context that have marked you the most while growing up?

Let’s start from the beginning … My first approach to writing was the late 90s at a fairly young age, around 12/13 years. I remember that I was immediately fascinated by the world of graffiti in all its forms. I don’t remember exactly my first contact with the spray but I remember that I observed “clinically” the pieces around my city filling pages and pages of sketch books . …

After came the street, I started with bombing and pieces around, every opportunity was good to drop a tag and paint … it was a kind of obsession. Graffiti for me was an escape from the difficult reality that I lived in that period. I “closed” myself in letters and left the world outside. I joined a crew in my area, the VT, and with them we found ourselves every day on the benches writing and talking about graffiti. Thanks to graffiti and the life experiences connected to it, I met my friends of all time, I lived negative and positive situations that have profoundly changed me and that have made me know better myself and my possibilities.

What are in your opinion the distinctive features of the graffiti scene in Rome? And how has it changed over the years?

In the early 2000s, Rome was a “bomb” for graffiti and for me as a “kid” was the paradise. You only had to wander around the city to see all kinds of tags, graffiti and trains with a bang of different styles, thousands of throw-ups and an industrial quantity of black and silver. The Roman scene was wild because Rome is a Jungle, this has always been its hallmark. Rome for me was a mother and a whore at the same time, “Rome leads you and caresses you”… it has enriched my style with stories and experiences, and continues to do it.

Why and when did you decide to focus on calligraphy and the study of letters?

The transition from graffiti to calligraphy and lettering was very natural for me, I don’t really know the moment of the “transition” … During my evolution as a writer, I gradually started to gradually insert components of lettering and traditional calligraphy into my wild style . This research led me to study and deepen the history of calligraphy and I began to professionally practice calligraphy trying to perfect my style.

This continuous study has certainly made me notice in the world of lettering, in 2015 I joined an international group called Calligraffiti Ambassadors, an artistic collective created by SHOE with which I started a path of international exhibitions and various projects. Now I am continuing on a more individual path, but one that also brings with it the experiences lived within the Calligraffiti movement, to which I will be forever grateful. 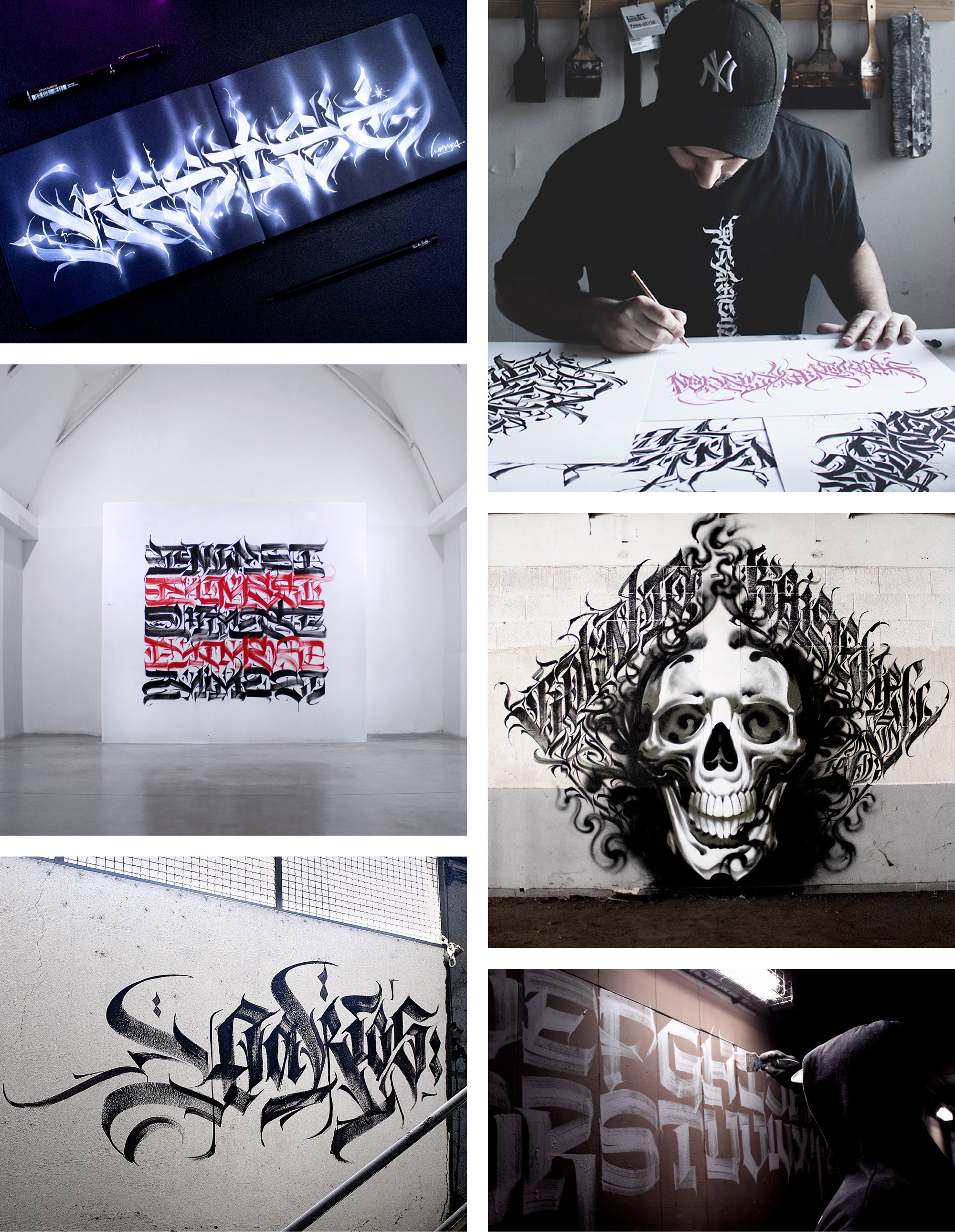 What are the aspects of calligraphy that still fascinate you the most today?

What fascinates me more and more about calligraphy is the constant practice it requires. The study of calligraphy is a continuous path without a real point of arrival, you can always and only improve but you will never reach perfection… at the base there is consistency in practice. Beyond this, I am fascinated by experimenting and discovering new techniques and tools, always looking for new effects, on paper or on other surfaces.

Writing and the “sign” in general are an ancient concept, almost as old as man and, in some way, sacred and full of meanings… Now that everything is becoming digitized, how do you see the future of “writing”? Why, from your point of view, is graffiti culture closely linked to the ancient tradition of writing?

Since prehistoric times, passing through the various eras, mankind has needed to tell its own story through signs and writing. The link with handwriting is strongly linked to a spiritual and sacred concept, just look at how much the Church has contributed to the development of handwriting, beyond believing or not… Obviously with the advent of the industrial revolution and of printed paper, the concept of handwriting has exponentially lost. Today we have digital (which I respect and use massively… believe me) but where the greatest difficulty for many is choosing the font on Word. Thanks to artists and organizations that have kept the traditions and history of writing alive, today I am noticing a revival of the handmade and more and more enthusiasts are approaching the world of calligraphy. At the same time, the culture of graffiti is in my opinion the highest expression of free and gestural writing, which fully represents humanity’s feeling of being remembered and leaving a mark of this passage on earth. It’s a bit like saying or screaming “I EXIST” right? 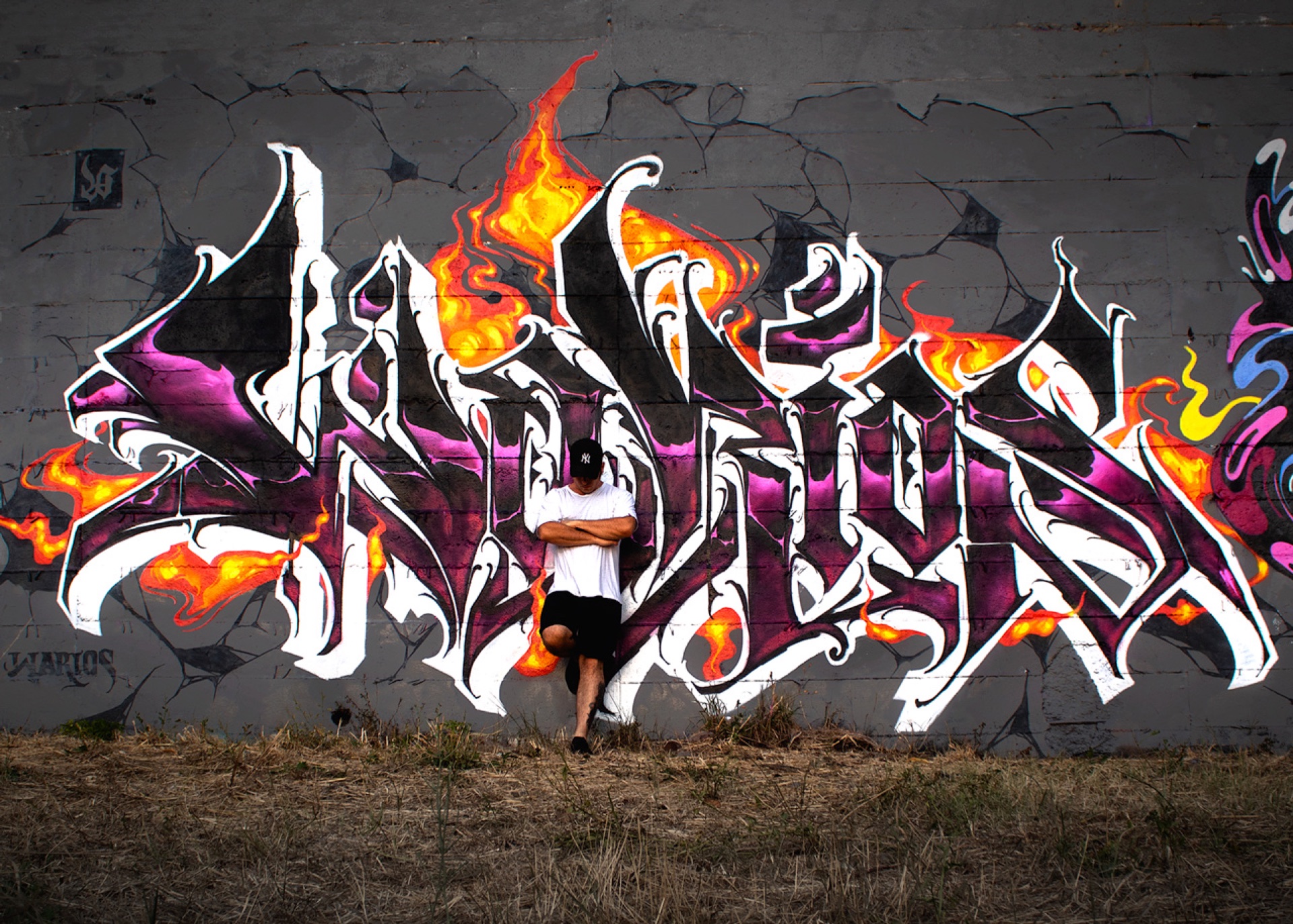 Who are the artists you have been most inspired by over the years? And who are you following with particular attention at the moment?

There are many: in graffiti, in addition to what I saw in Rome, I have always been inspired by the American style, NY and Los Angeles in the first place… and then I get to the calligraffiti of SHOE, the sign of CHAZ BOJUORQUEZ and the handwriting of LUCA BARCELONA. I consider them Masters, along with many calligraphers and designers who have contributed to my growth. At the moment I have focused my attention on the world of design and I also find inspiration from fashion and painting. I am working on various projects that go beyond calligraphy.

What other aspects of Hip Hop culture are you linked to and in which way?

I am connected to the whole HIP HOP movement. HIP HOP has been my lifestyle almost a religion .. musically it has always accompanied me since I was a child, it was a breaking movement comparable to that of graffiti, I will thank HH forever …

What should the world of “traditional” art and in general, the society learn from the culture of graffiti, that in the meantime, is being “plundered” on one hand and condemned on the other? In your opinion, can there be a transition from underground to “popular” culture, or the essence of this must remain underground and “secret” in order to not lose its codes?

Tough question … Graffiti is born as a free and uncontrollable phenomenon, it is a germ that spreads in the city without control, unlike much of traditional art. This essence for me will always remain the basis of the movement. This is not to say that graffiti should not enter museums or be a form of redevelopment of certain spaces. I consider graffiti the most important and breaking art form of the twenty-first century and therefore they must be valued; many “experts” should better study the phenomenon, which is often described in a superficial or incorrect way. 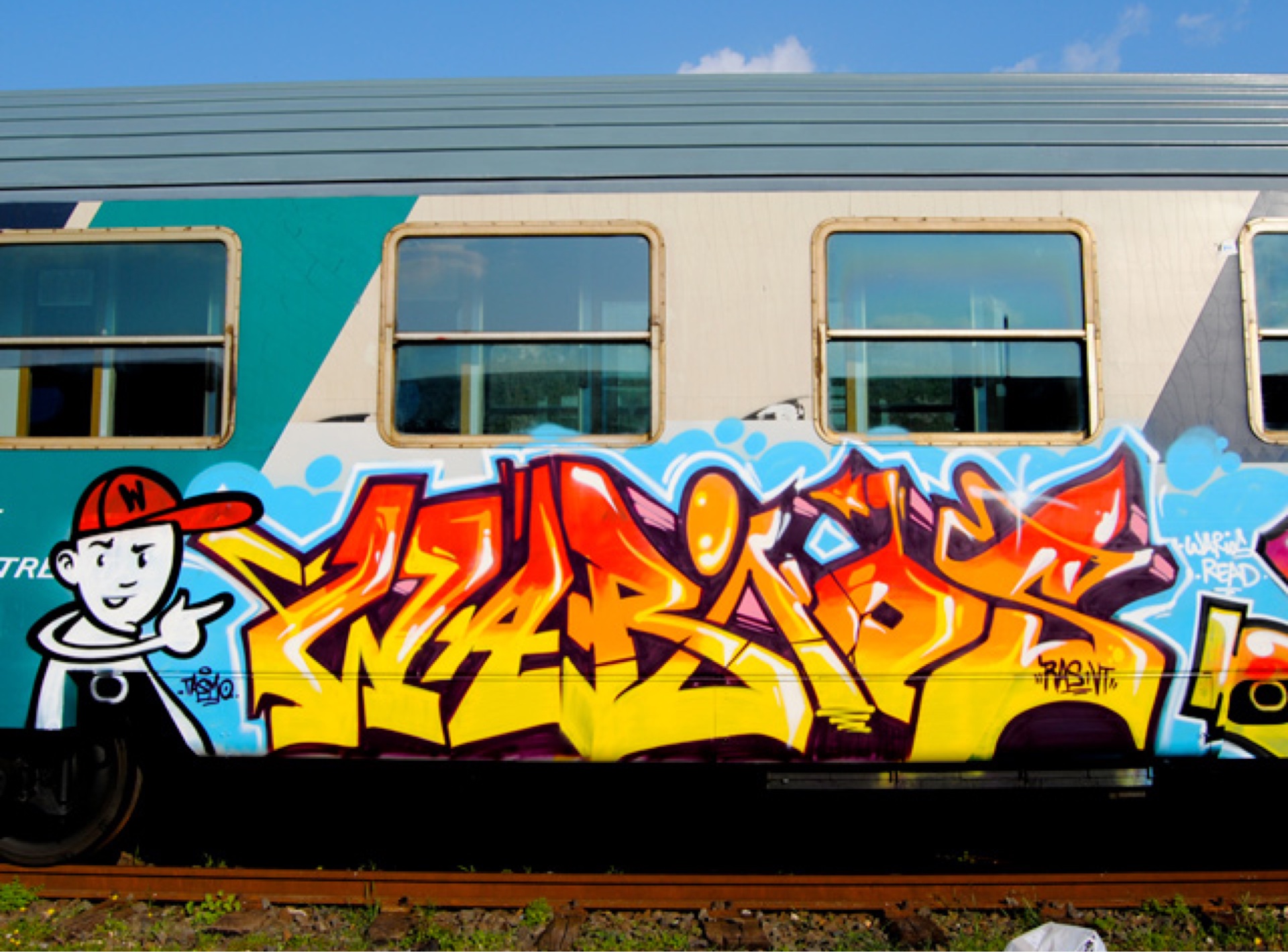 Demonizing graffiti for its illegal aspect or treating a writer as the “monster” of the moment is just vulgar propaganda. On the other hand, there is in fact an exponential exploitation of graffiti for commercial purposes … partly because it is cool; partly because it brings profits. You try to turn them into something “politically correct” … but that’s not how it works. At the base is that graffiti is a huge phenomenon and with a rich history, those who don’t know them should read more books and go a long way before speaking! I therefore believe that it will always remain a culture with an underground soul, even if swallowed up and exploited by the mass media.

Which projects do you have for the future?

As I told you I am working on various projects that will soon see the light … I can tell you that I will certainly continue my research in the field of calligraphy and lettering bringing it to the “next level” … the spaceship is about to take off towards other universes: D