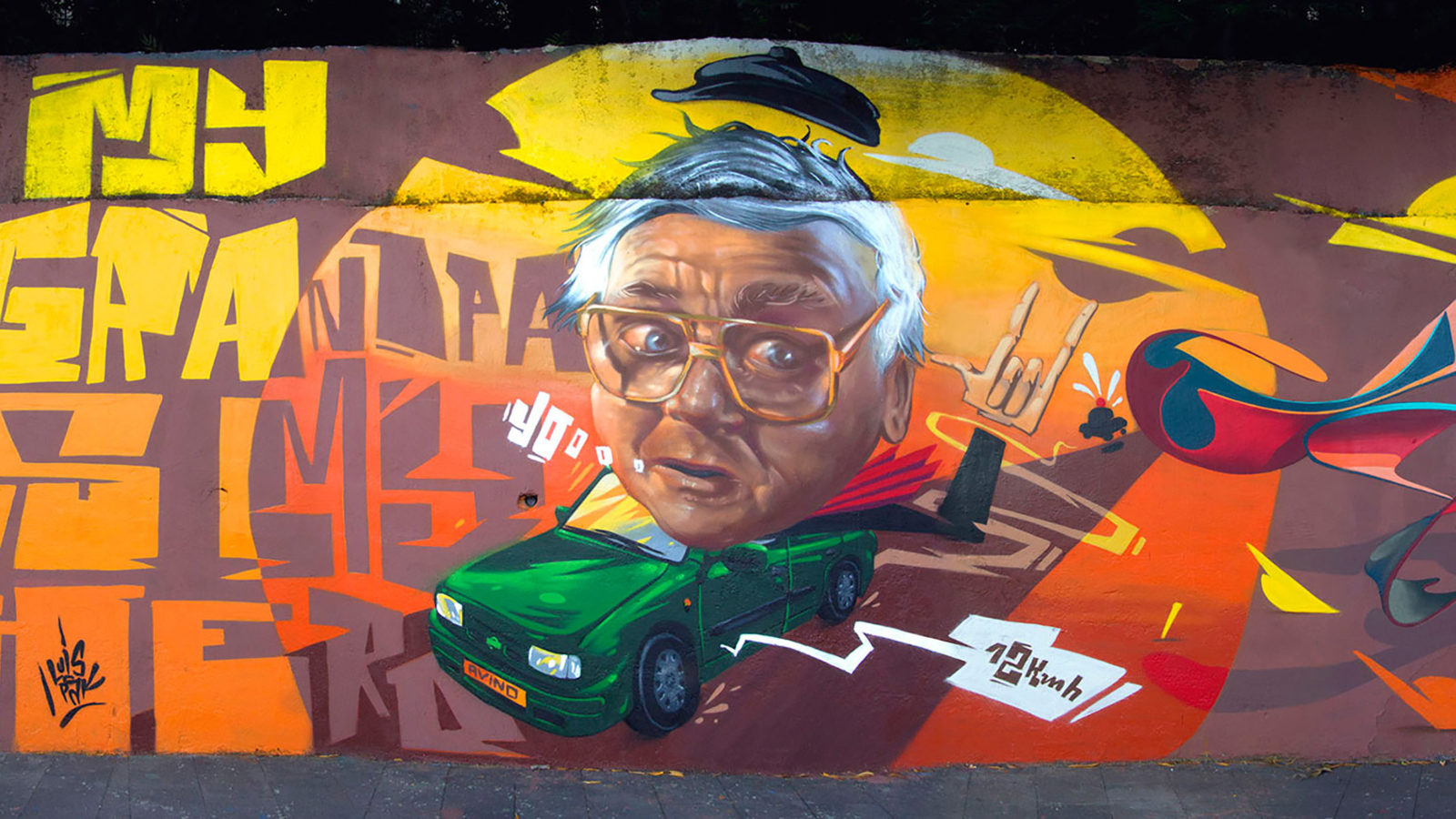 Hello Luispak, tell us about the origin of your alias and how your crew was formed.

Hi guys and thanks for giving me this interview. My real name is Luigi and as a graffiti artist I have always tagged PAK. This name was inspired by the videogame Pacman and by a Busta Rhymes track which reminded me of the game’s sound effects. After some time I gave it further significance with an acronym that fully represents me: Predisposizione Al Kolore which in English means Predisposition To Colour. Until 2007 i was just known as PAK. That was the year I painted at the LA Gold Rush with my partner in crime Bomb, an event organized in Los Angeles by ManOne and Raptuz from the TDK Crew, which combined Italian and International artists.

Los Angeles is heavily influenced by latino culture so a lot of locals started calling me Luis. That’s how my moniker LuisPak began to take hold. This experience in Los Angeles was very intense and taught me a lot. I thought it was only right to incorporate Luis in my tag so as to always remember and celebrate this achievement. During this trip me and Bomb got a crew name tattoo because we both wanted to cherish that moment forever. We went to Venice beach and got DRAK tattooed in typical LA Style lettering on our right shoulder. DRAK is the name of the crew we founded in 1999. In some languages it means DEVIL or DRACULA, in others DRAGON. That same year Kaos One, one of our favourite Italian hip – hop artists, released a track called “L’anno del dragone” which in English means the year of the dragon. The stars had aligned and we decided to stick with that crew name. At the very beginning it was just me and Not1, two kids from the suburbs trying to make it big in the game while being constantly insulted for our baggy jeans and harassed by the police for our drawings. We didn’t yet know what we were getting into. Subsequently Tech and Bomb became part of the roster. Some stayed, some left and now the crew is made up of Not, Luispak, Bomb, Trip, Sawe, La180, Strano, Kute, Chen, Dioniso and Korvo. Our crew is better than any wall we have ever painted. DRAK is a family.

What are your first memories of approaching this artistic phenomenon? What were your sources of inspiration? Do you have artists in the family?

My mom creates hand-made jewellery. She has always had an artsy side and has pushed me to engage in manual and creative activities. Even through all the difficult times she has always done her best to foster my passion for art. I owe her a lot. My grandpa greatly inspired me as well. He was into restoring antiques and was always busy with something. Those smells and images are still etched in my memory. I am really grateful to my family for this. They have inspired me in many ways. With graffiti it was love at first sight. It was 1996 and I was in middle school. Seven (an Italian brand) had just came out with a new school diary. Those pages were covered in the first examples of graffiti I had ever seen. I was thunderstruck. That same evening I was already hitting the streets with a bunch of cans I had bought from a hardware store. My environment was that of a small city in southern Italy. Internet was a utopia and smart phones didn’t exist.

All the same Battipaglia had a dynamic hip hop scene in the 90’s. We didn’t have much, only a few stories going round about hip hop and so-called graffiti. But we always got busy, very busy. Soon after we discovered Aelle Magazine at the newsagents and it enlightened us. We finally began to understand the foundation behind what we were doing. We started learning the jargon: tag, b-boy, writing, the four disciplines and the whole world behind the movement we were approaching. Among the first artists i was inspired by on Aelle’s pages were Eron Blef and Dafne, Seen, Cope 2, Lords Of Vetra, TDK, KNF from nearby Salerno, KTM from Naples as well as KAF and PARADISO who also came from Naples and finally Carmine Korvo from Benevento who I became very close to in the following years and eventually became part of the DRAK crew. Coincidence? I will let you readers decide…

My evolution in graffiti started out with NY type wildstyles and puppets. I was concentrating mainly on instruments and techniques rather than styles during those early years. We would participate in graffito related events and paint halls of fame close to home. Then, in the year 200, something changed. We went to Pisa for the Panico Totale jam. We were stoked to see Seak, Daim and Loomit painting live. This was the defining experience which radically changed our approach to graff. By observing the masters we learned new techniques. We returned home after only 3 days but we had changed deeply. Our style had progressed. We started to feel the need to innovate. That was the moment in which i realized I needed to find my own artistic identity.

Tell us about Luispak’s origins and who he is today. What has changed? What is your day to day lifestyle like?

I was studying at an art school in Salerno focusing on graphic design and at the same time following a course in comic drawing. When I finished my studies I almost immediately began a career as a graphic designer working in agencies in the vicinity of Salerno. On a daily basis I work in Elementi Creativi, a creative agency that I set up In 2008, which focuses on communication, illustration, graphic design and web design. I am currently jumping back and forth between graffiti on walls, identity projects, canvases and web projects. My life revolves around these things and leaves me little time to do anything else. But that’s exactly how I like it!

What is the underlying theme behind your creations? And what sets you apart from the rest?

I believe that I have never drawn the same thing twice. Not even something similar. Having considered this I still think my style is unique and recognizable. Even the “sofa” series avoids repetition. I would choose this as my defining characteristic: a variety of subjects that doesn’t impinge on how recognizable my style is.

How has your style evolved through the years? What medium do you prefer working with and what techniques do you use?

As I mentioned earlier I have painted many different things. I do not impose limits on myself. My stylistic research and experimentation has always been varied. Generally I have always been influenced by what attracts and stimulates my imagination. I work on paper, wood, canvas, walls, sometimes metal. I like to try out new stuff. Usually I will make sketches for my pieces on paper. Lately I have been experimenting with my iPad as well. Then I transpose my sketches directly on to a wall. That’s the old school way.

Conceptually, how would you define the artistic expression that permeates your drawings and your lettering.

My “shit” is halfway between surrealism and illustration. Letters are the main subject of my zany world. I like to call myself a street surrealist.. 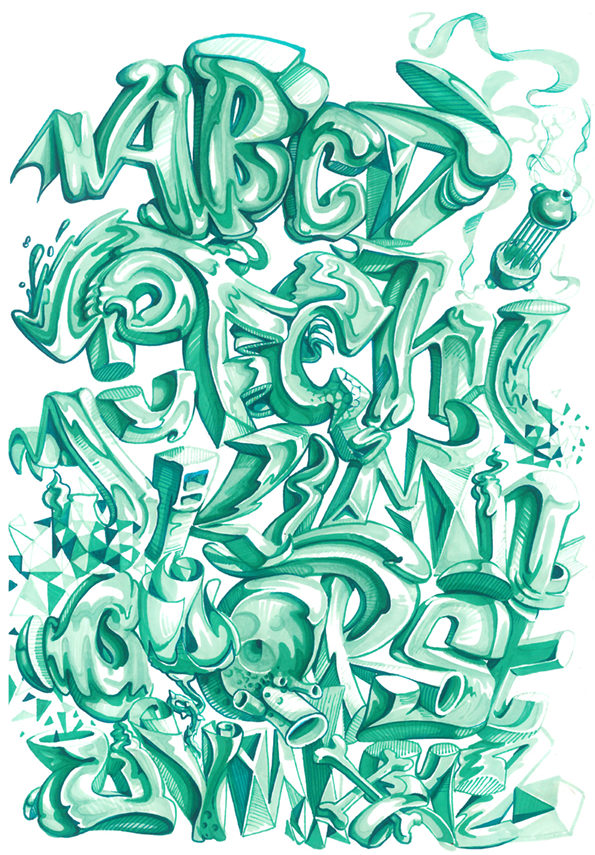 What artists are you inspired by or have you been inspired by? What part of the history of writing must be passed on to the coming generation?

Among the many artists I have been influenced by I can’t fail to mention Leonardo Da Vinci, Escher, Dalì and Bosch. Among legendary writers I Can’t forget: Seen, Vulcan, Phase2, Daim, Seak, Korvo, Blef, SirTwo, ZedOne, Etam cru, Dado, ShaOne, Boost, Kaf, Zar. These are legends in my eyes, each one is special in his own way, they have all been a huge influence on me.

Tell us about your cultural heritage and what experiences you’ve had with foreign art galleries. What is the difference with art galleries in Italy?

My relationship with art galleries has been shortlived but intense. I have great memories of my exhibitions abroad, above all Los Angeles and Barcelona. I cannot say the same for Italy unfortunately. A lot of self-sacrifice without much gratification. I have often felt disappointed.

Any future projects? Where do you see yourself on a few years?

My aim for the future is to keep this fire burning. I trust in divine providence. For certain I see myself painting walls with my crew.

What life lessons have you gleaned from this noble art? What suggestions do you have for the kids who are just getting into graffiti?

According to me graffiti is like the school of life. It is also a sport and an all-encompassing passion. These are my suggestions to the youth: practise a lot, take your inspiration from the past and respect those who came before you but look also toward the future, try to find your own path and finally travel and share real experiences even if they sometimes are hurtful. Internet is a great window on the world but it is only a window, not enough to experience real growth.