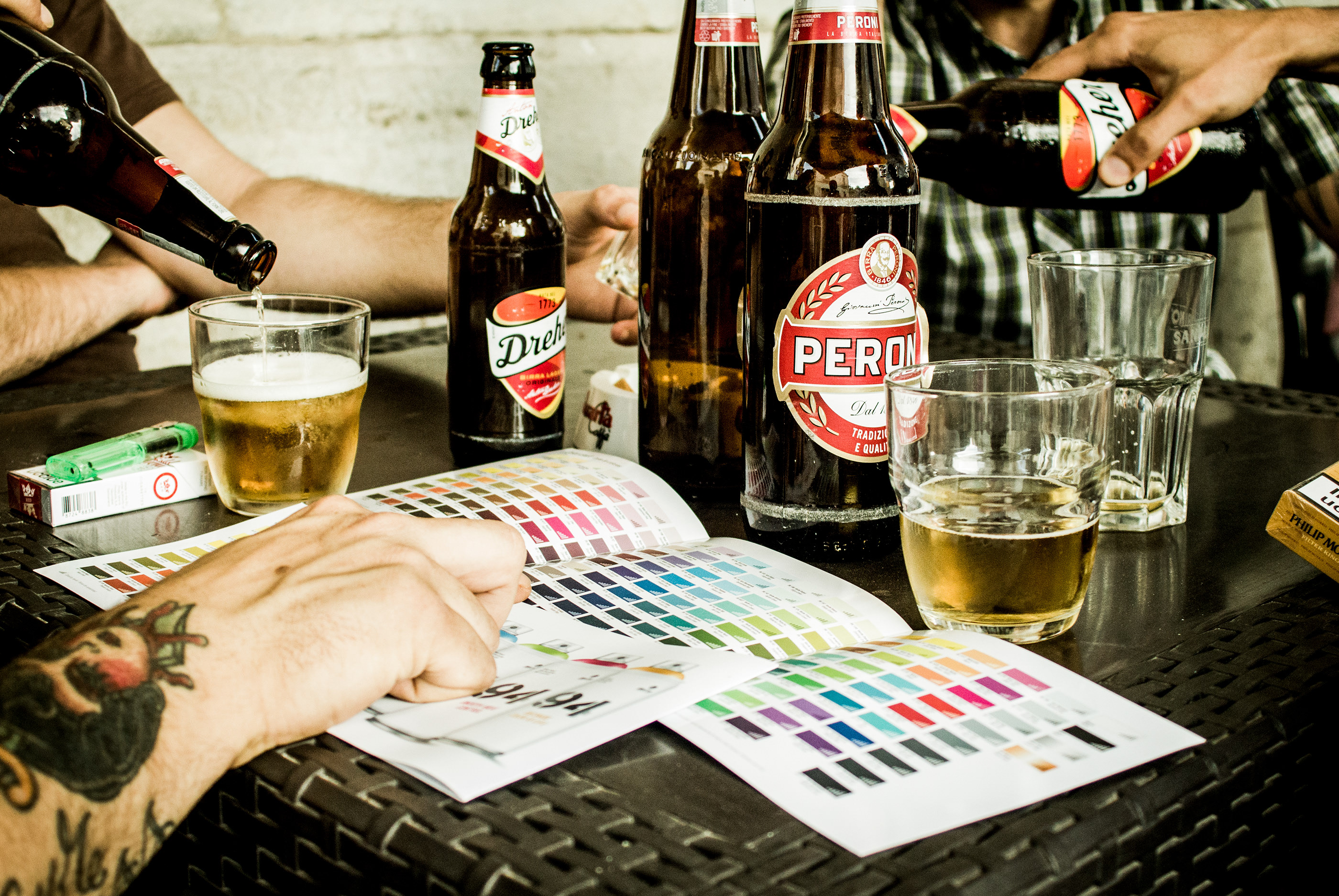 Hi Vints, “Just 4 My Name” is a photographic project dedicated to the world of graffiti on trains, developed in the so-called “yards”, between tracks and stations. When did you come up with the idea of ​​making this report and why? Why did you decide to call it “Just 4 My Name”?

So, this photographic project tells the day of a graffiti writer. It was born among the brickwork of Salento from an idea. It was conceived and was created in collaboration with my friend Giorgio Lombardi, writer and photojournalist.
Following your question, the motivations are those of anyone who is passionate about something, and at some point feels the need to share it and show it from the inside to other people to the non-experts. The narrative is sequential and is mainly focused on details, in order to make every aspect and phase, in our documentary, as faithful as possible, as it’s a work that wants to reach all those people who are not familiar with the theme. That’s all. The title embodies what is essentially the basic aspect specific to the spirit of this discipline, which differentiates it, in terms of methods and intents, for example, from all the other “younger sisters” of the “street-art”. 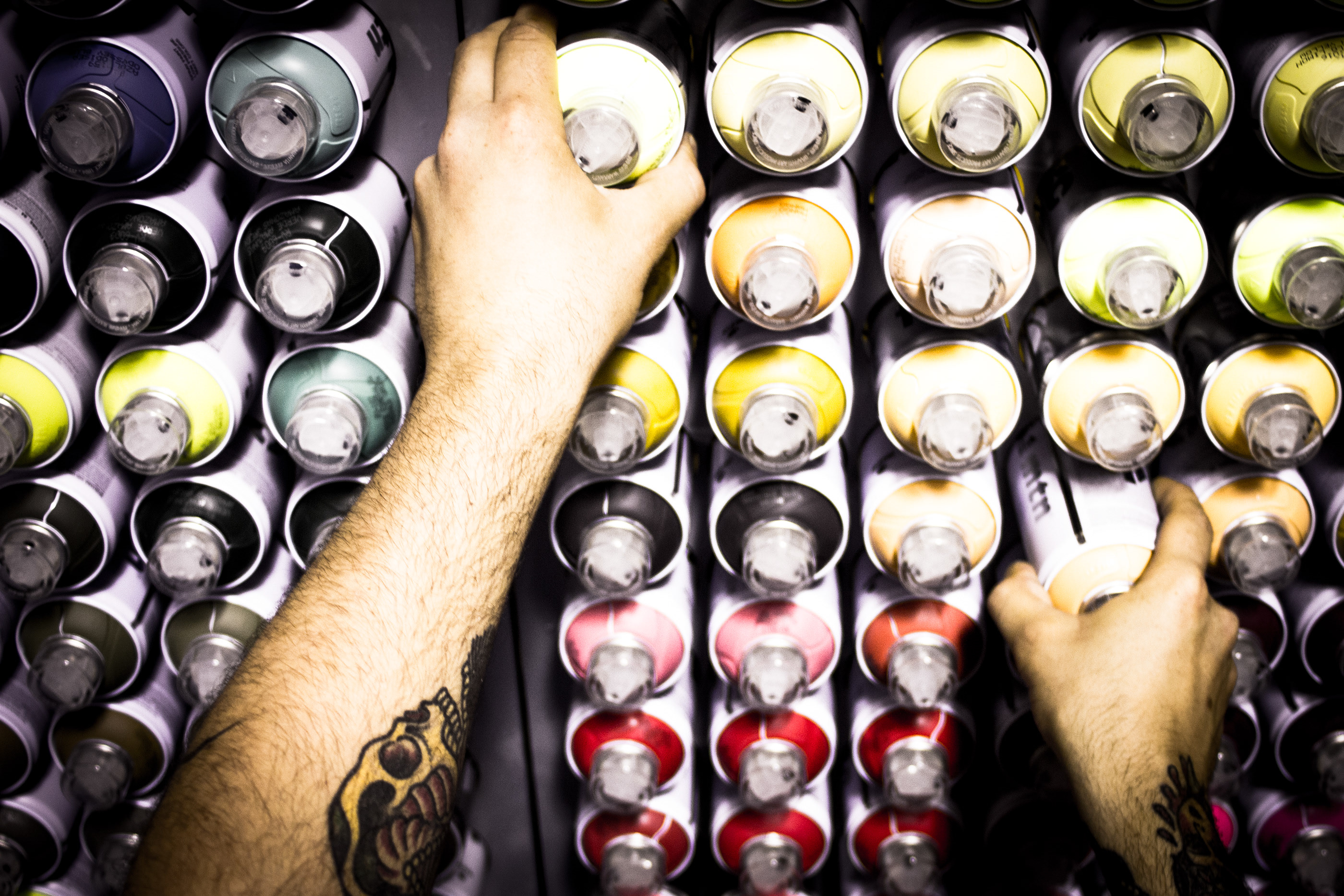 It is known that graffiti writing, from its birth, has been based on the study of its own style of lettering, on developing and fitting forms to give life to the letters, creating its name, in an evolutionary perspective. Your own name as a metaphor for a certain dissent, like the uncompromising rise of your rebellious soul, of the concept of existence itself, and of your ego. 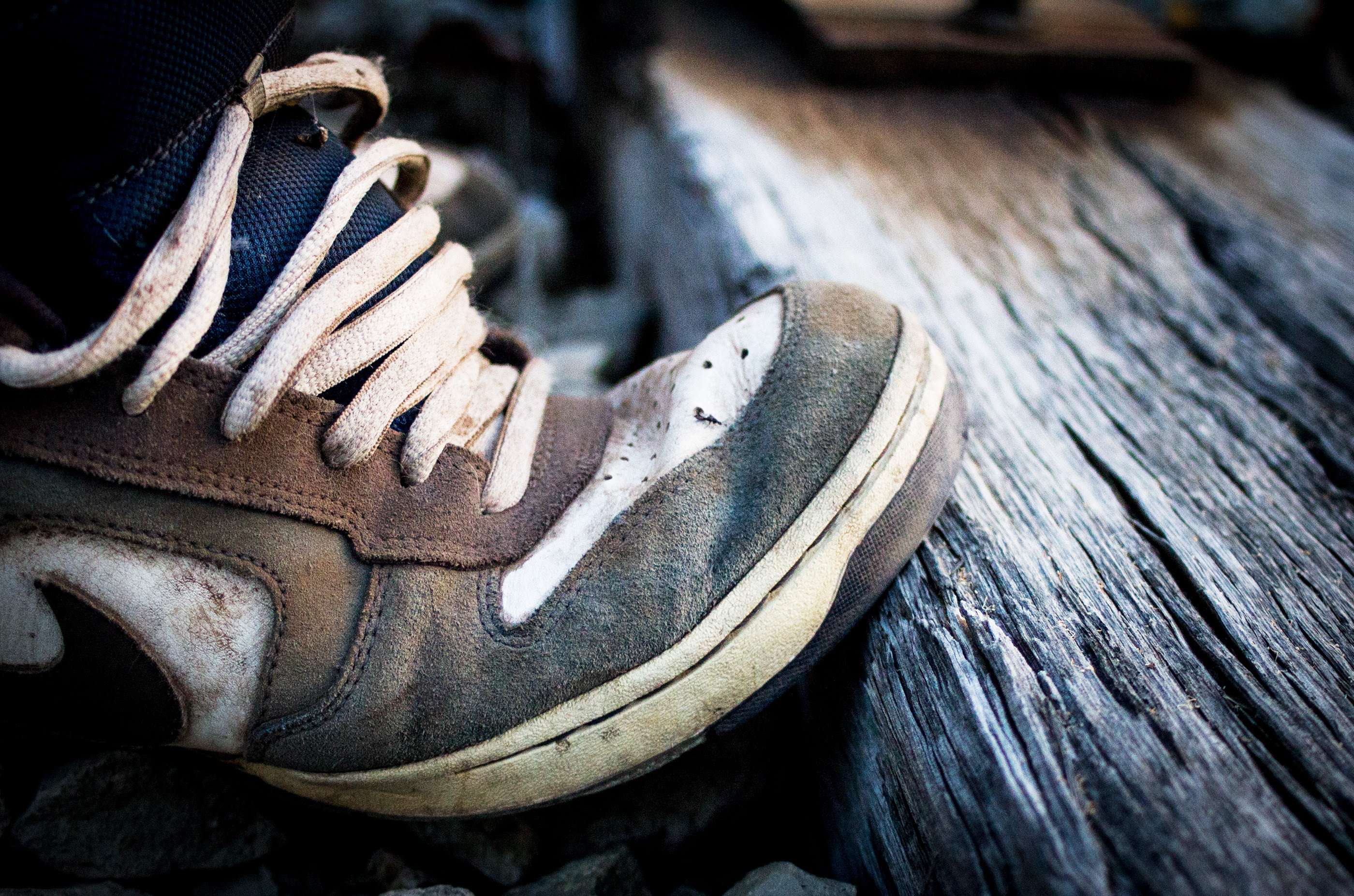 In one of the photos there is a scene of the action planning. Do you want to tell us how this phase generally takes place? In your opinion how and why can the graffiti experience create strong bonds between people?

Well, I would say that as with any type of project or objective, the more detailed and precise is the planning, the more satisfactory are the results. The planning aspect is fundamental especially when it relates to an illegal activity. Clearly, the commitment change according to the type of yard or in any case, of the places to go to paint, based on the potential danger. 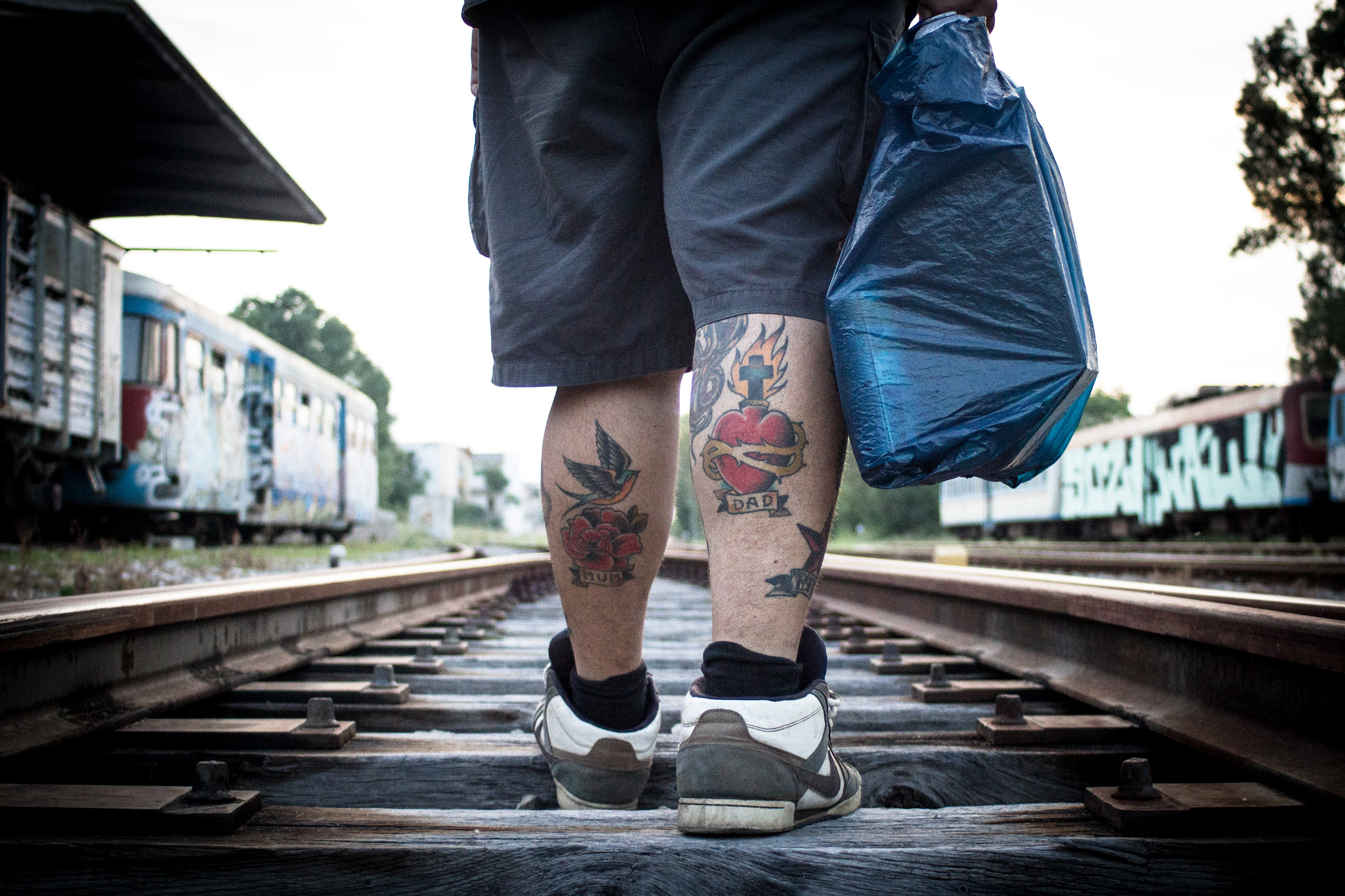 Certainly sharing beautiful (or not) extra ordinary moments and situations with another person, in some way enriches the bond. A sort of complicity, in a romantic and perverse communion of intent… 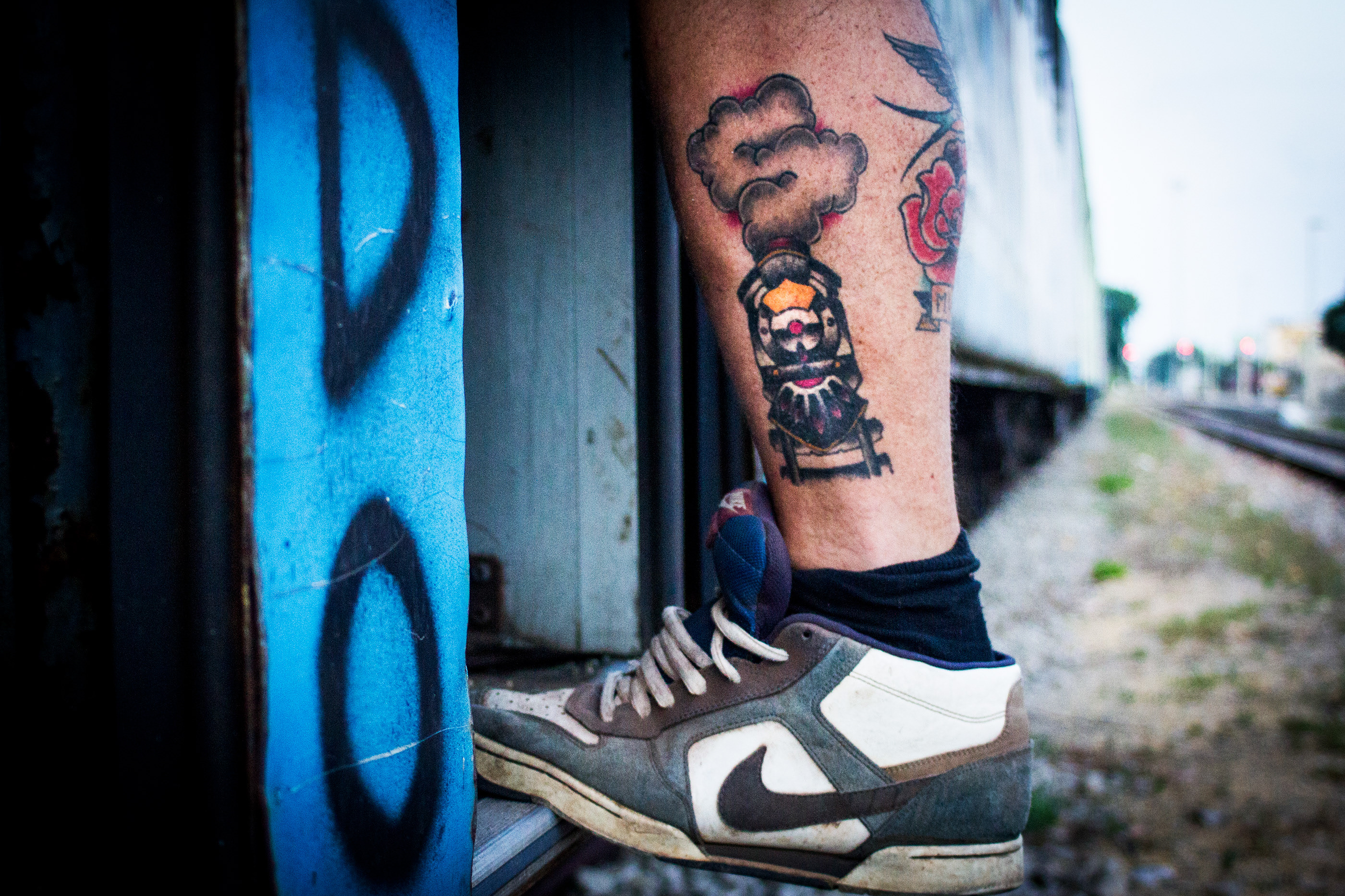 I would not know how to express this aspect in other words. It is not easy to translate feelings and memories into words. I have frames printed in my memory, adventures and perfumes that probably only those who were with me at that moment can fully understand. This is what I like to think and it is my vision compared to my experience, but it is not always like that, or probably not for everybody. Graffiti writing is a discipline; the most of it’s the performer. As it is for any type of relationship, it should always to be an exchange.

Without any doubt, painting trains is one of extreme, sought-after and singular experiences in the world of graffiti, so much so that throughout the world it is subject to increasingly rigorous repression. In your opinion, what really drives a graffiti writer to reckless actions, which can sometimes compromise his criminal record? Do you think it’s mostly a question of emotions, or what?

We know that this movement is based on two main philosophical and practical branches, two parallel and coincident vectors at the same time. On one hand, there are those who prefer personal research and constant study linked to their style, aimed, in the best of cases, at the concept of originality as for any artistic language. All of this needs a constant application and an availability of time, especially in making the whole piece to reach a complete and personal development.

On the other hand, those who focus mainly on the quantity and on the speed of execution, as well as on the simplicity and legibility of the letters in order to minimize the decoding process by the user. Since the field in which the game is played is nothing more than the urban fabric of cities, I believe that in no other social / cultural / artistic movement has the concept of user been as extensive, transversal and direct as in this one. 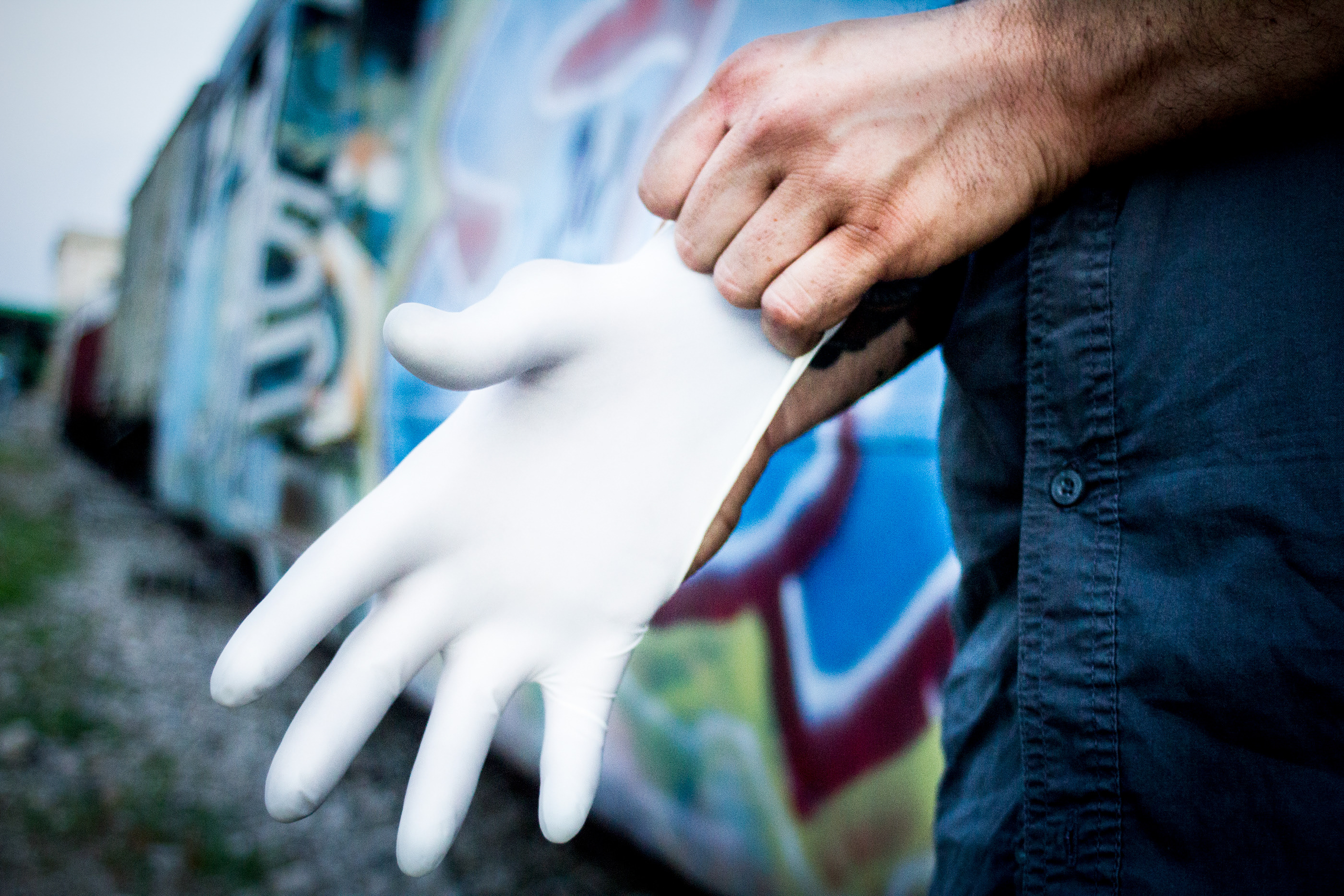 Since the field in which the game is played is nothing more than the urban fabric of cities, I believe that in no other social / cultural / artistic movement has the concept of user been as extensive, transversal and direct as in this one. I think that the absence of mediation between creator and observer pushes the graffiti writer to actions with a large risk factor, which naturally translates into greater emotional charge and immersion. 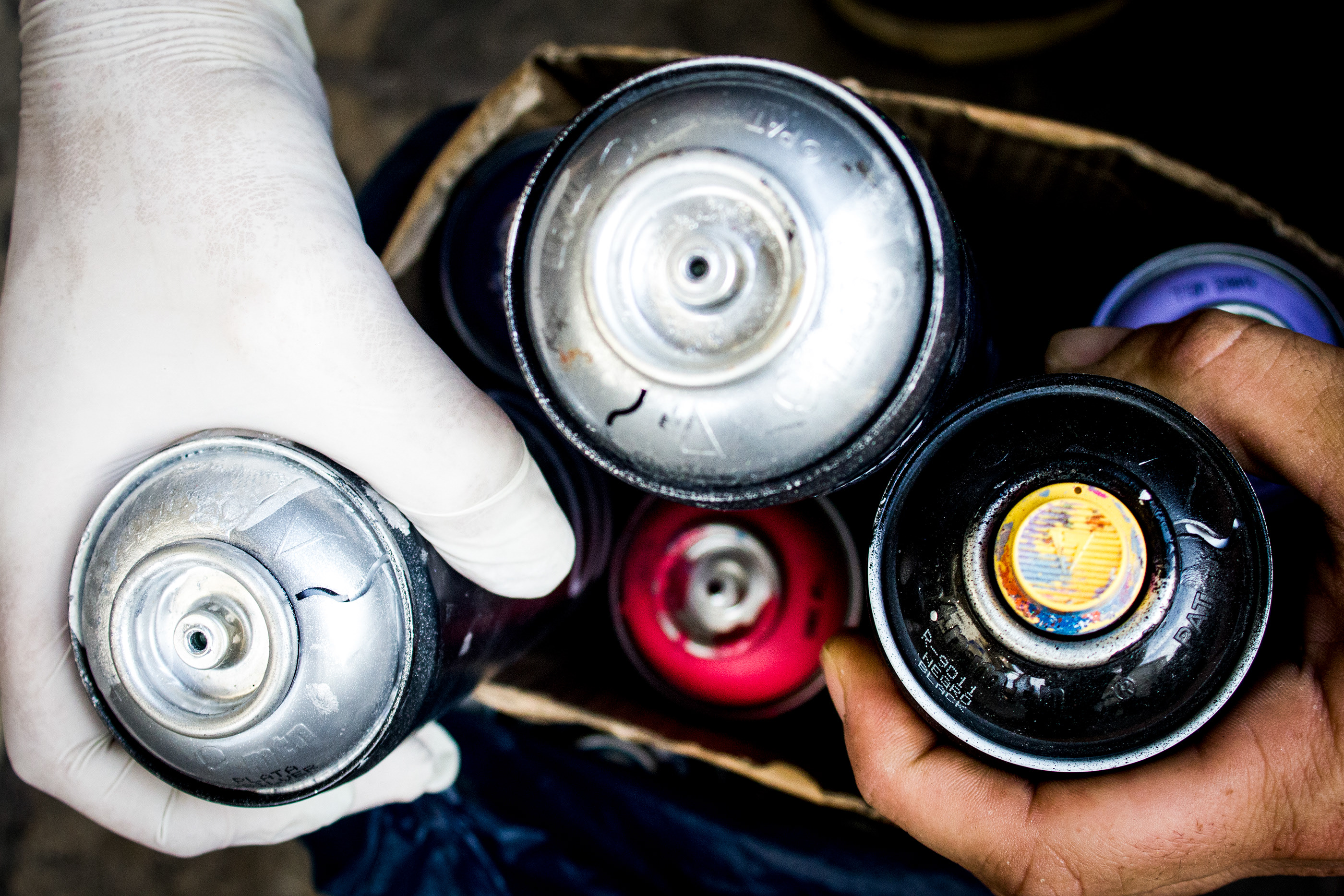 You brought up the emotions, and this is precisely the focal point, from which, in my opinion, the need to go further, to discover new places, to experiment new actions more and more, as you say, reckless. It becomes a kind of addiction. As for a heroin addict, at one point a single dose a day is no longer enough! 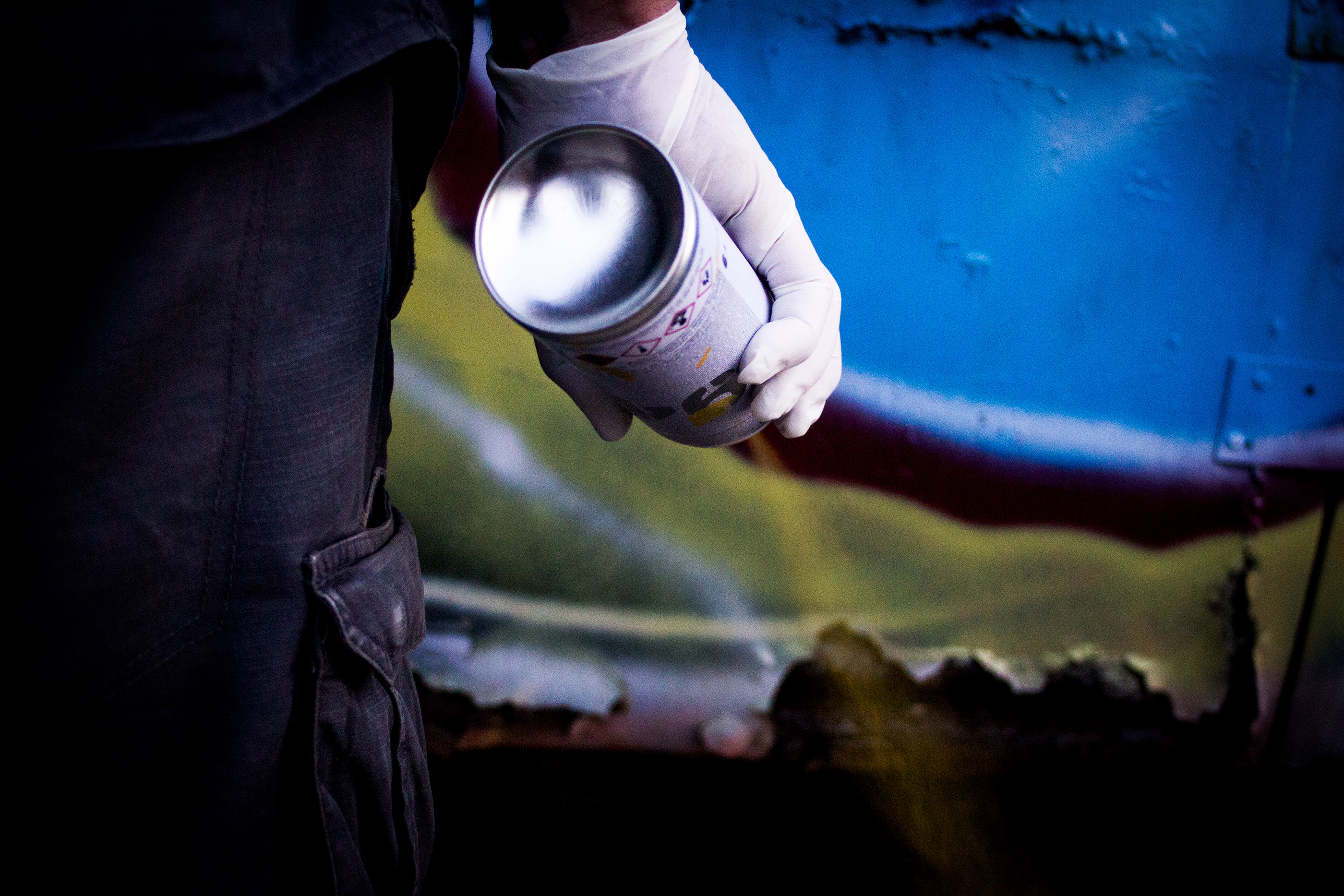 In any case, I believe that constancy in practice, in every phase of the work, as well as the experimentation, regardless of the approach methods of each one, are fundamental for the purposes of growth and therefore of creative and emotional satisfaction . As with anything, the more you do it consciously and perhaps with a good reason, the more satisfying and useful it will be for both those who do it and those who use it. It is obvious that study has a fundamental role in awareness. To date, many people, thanks and through the training practice of graffiti and aerosol art, often undertaken at a young age, have, over time, embraced other artistic paths, new languages, with a good motivational and design background, and a good dose of courage and tenacity. Me too. 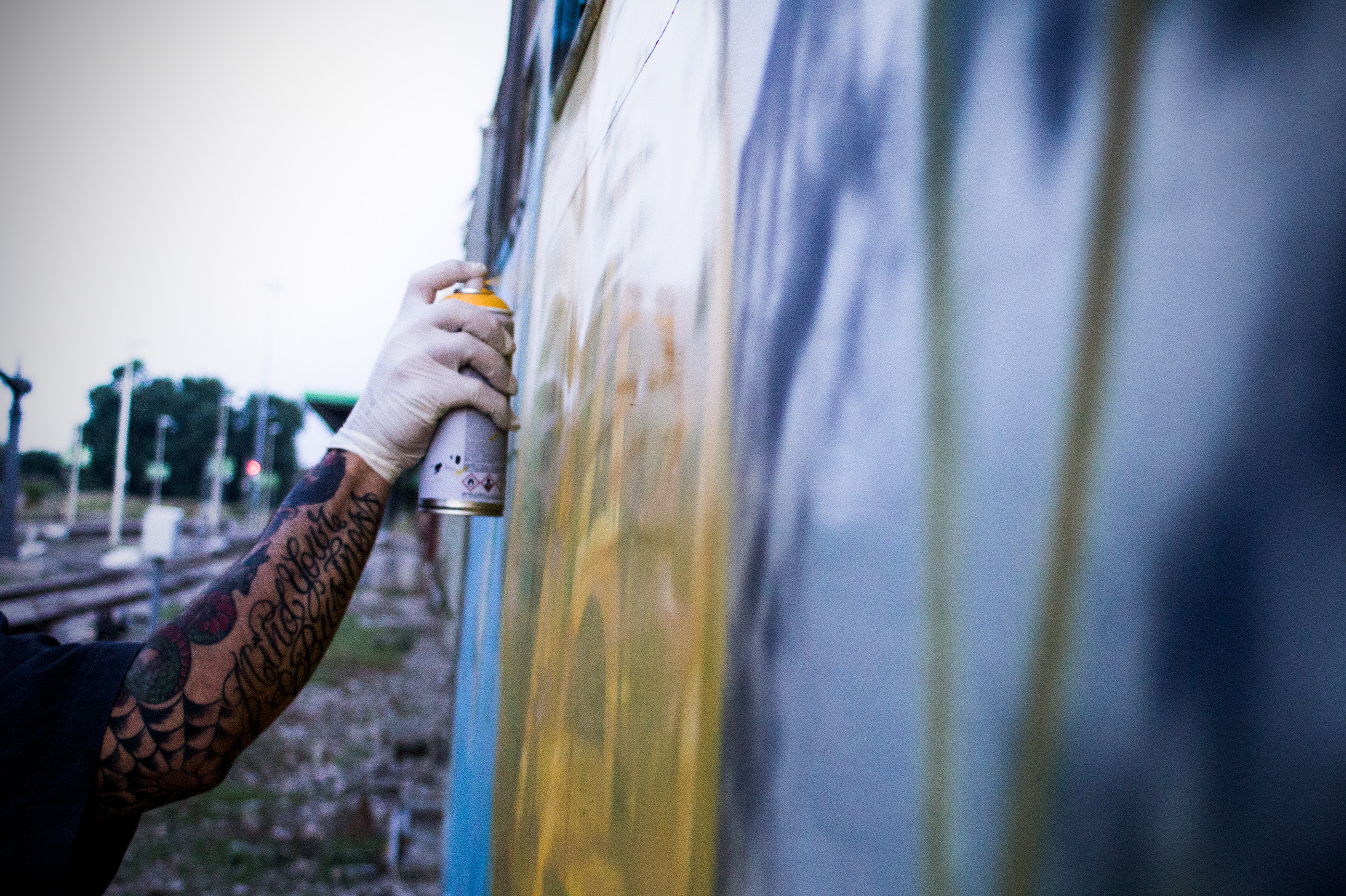 Do you have any particular anecdote of nights in the yard that you want to tell?

There would be anecdotes to tell. Leaving aside the saddest ones, around Italy, of escapes and pickled spleens, one of the most beautiful concerns a night about ten years ago. I saw emerge from under the wagon in front to me, a very sweet puppy, a tender and frightened little dog, abandoned. He stayed there all the time with us, sitting next to the sprays, he was already part of the group, little bastard as he was. When Flavia came to retrieve us and saw me get into the car with my new friend in my arms, she immediately fell in love with it and we decided to adopt it, the super Bin! 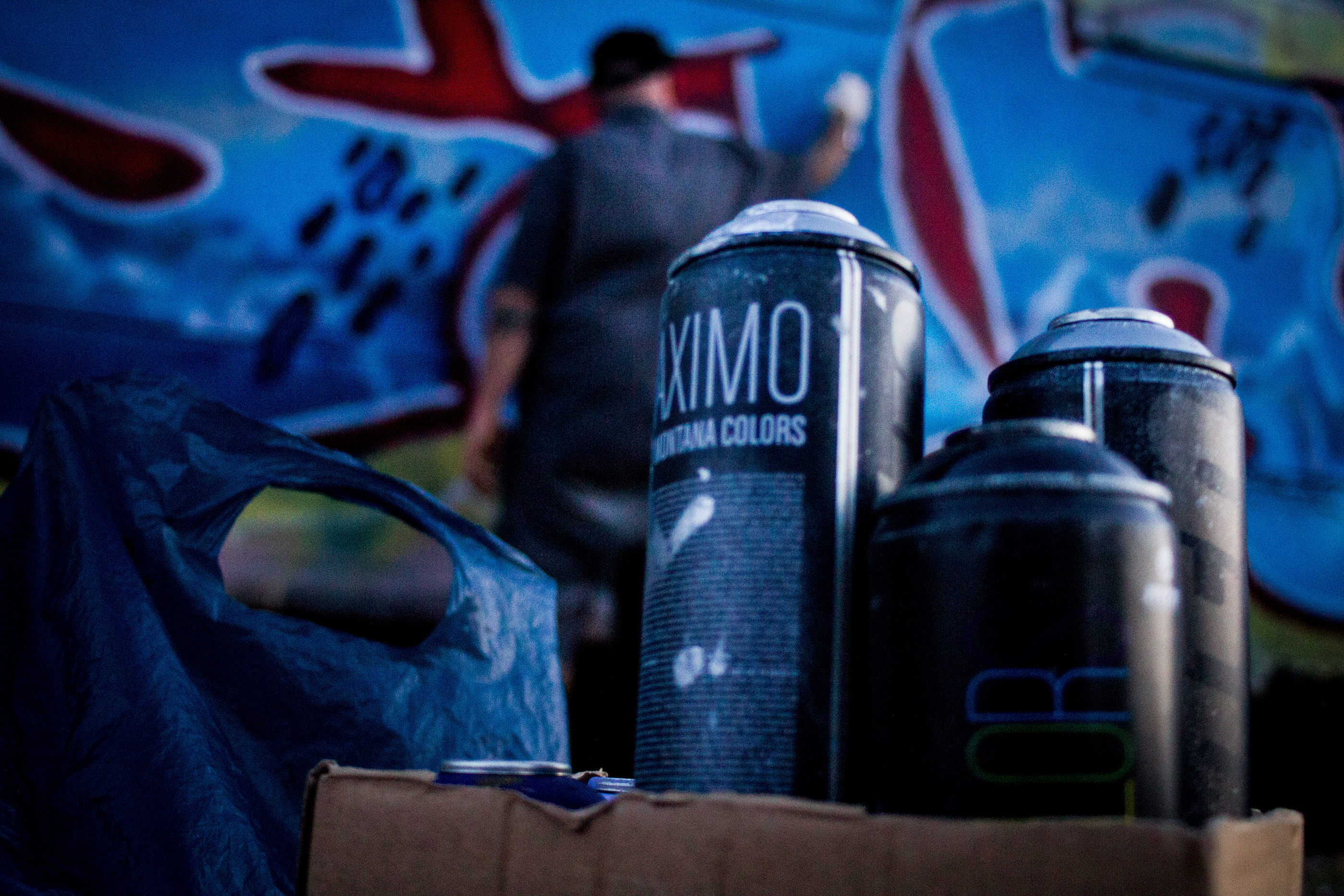 What do you think are the crews and historical names that most of all have left their mark in this movement in Italy?

There are many writers who first painted their names and who sensed the possibility of developing shapes, compositions, and joints. Things that now, fifty years later, may seem obvious. Even in Italy, while I was in the cradle, there where many people who have somehow imported this discipline and sowed the seed that the following generations cultivated to this day.
I remember the first pieces of the CKC of Milan, Flycat, Spyder7, Kay One, AskOne, the PDB space e2e, the 16K, the ZTK and the TRV Crews of Rome. Well I would say that Phase 2’s contribution was very important for Italy, both in terms of style and discipline. Dayaki, Duke-T, the FCE, the SPA here in Bologna. 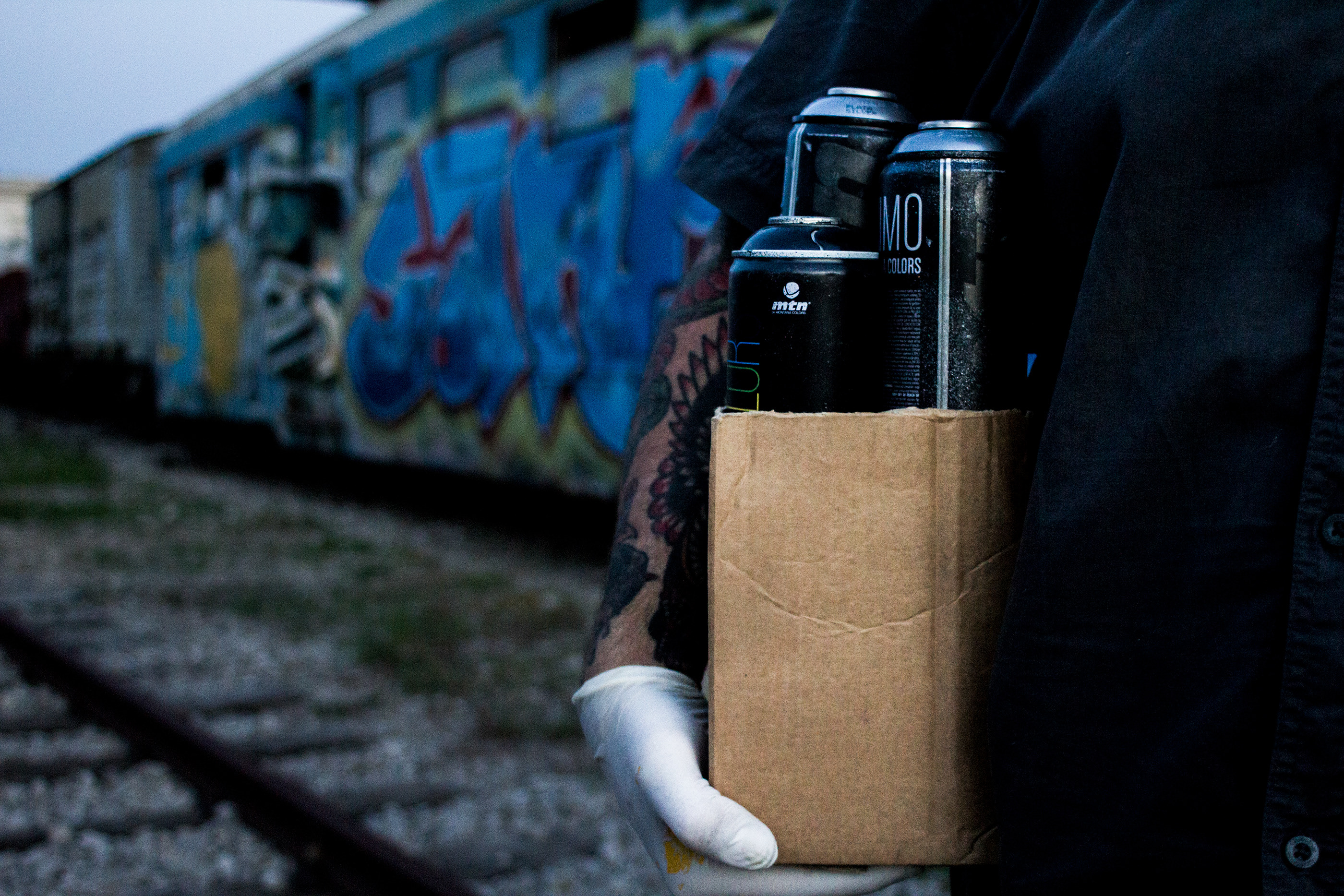 It always has a certain effect to view the old Italian fanze and certain super wild styles. Intertwined loops and colors that can bring you back in time, talk about a genuine, fervent, positive energy. I really also like the newest styles, the softer ones, contaminated from country to country. Even today there are many very strong and constantly active people, perhaps only a little more open-mindedness and humility are missing, especially in the younger ones.
Peace to all the people I met thanks to this micro-world and a huge thank you to the ThrowUpMagazine team for the space and availability!

Watch the project on Behance » 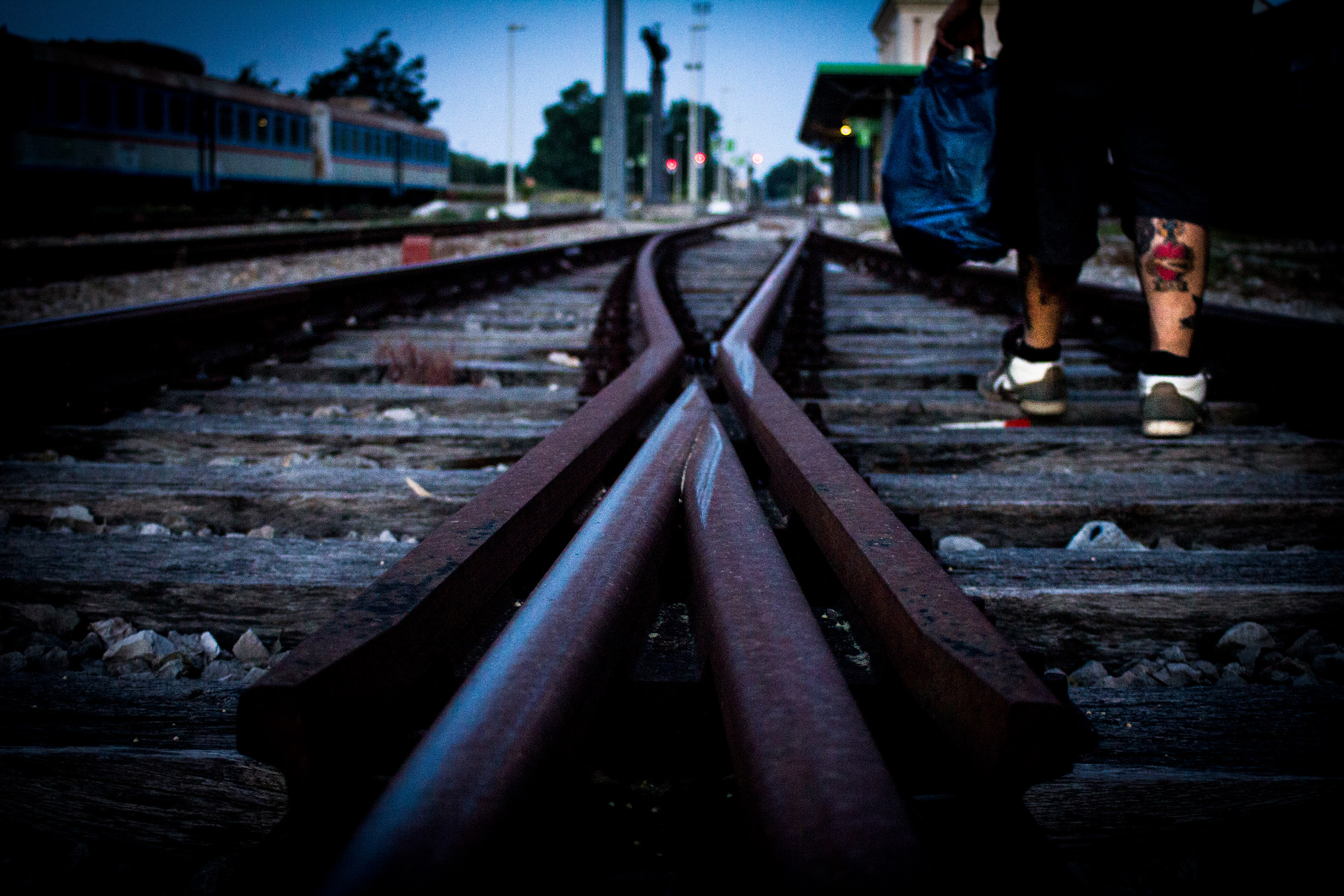 The ”Tributes” Art exhibition of Esa is an act of Love