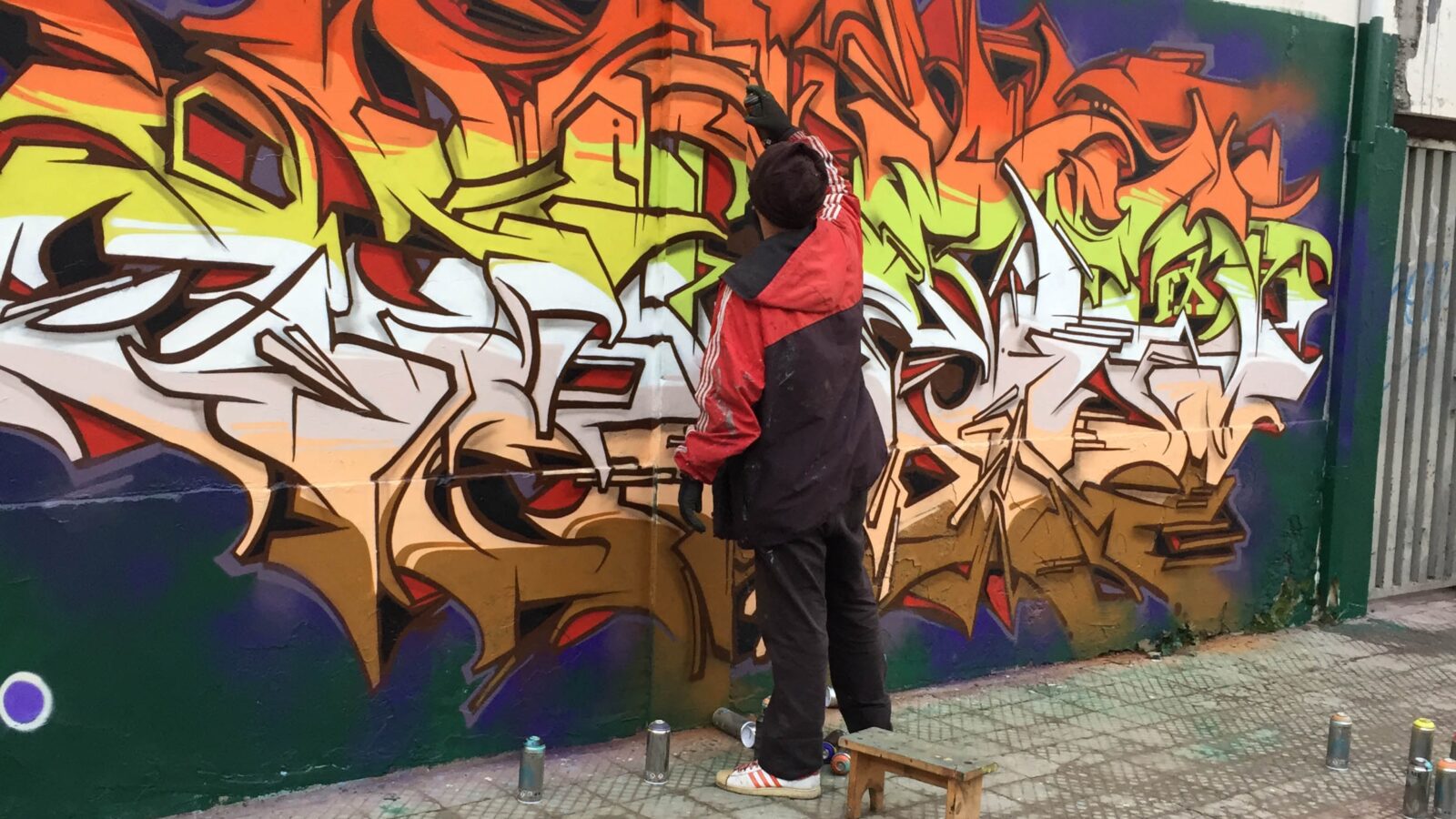 Hi Does1, thanks for the availability, we really appreciate it.Can you tell us about your origins, your personal background and what pushed you to start with graffiti?

I started graffiti in 1988 and today still I don’t know why I began. Here in Brazil it was very difficult to get some related information; in 1990 I also started to dedicate the pixação, and it was 1994, the year that I ended in a chain, because of those acts, and then on I focused only on making graffiti, but wildstyle letters. 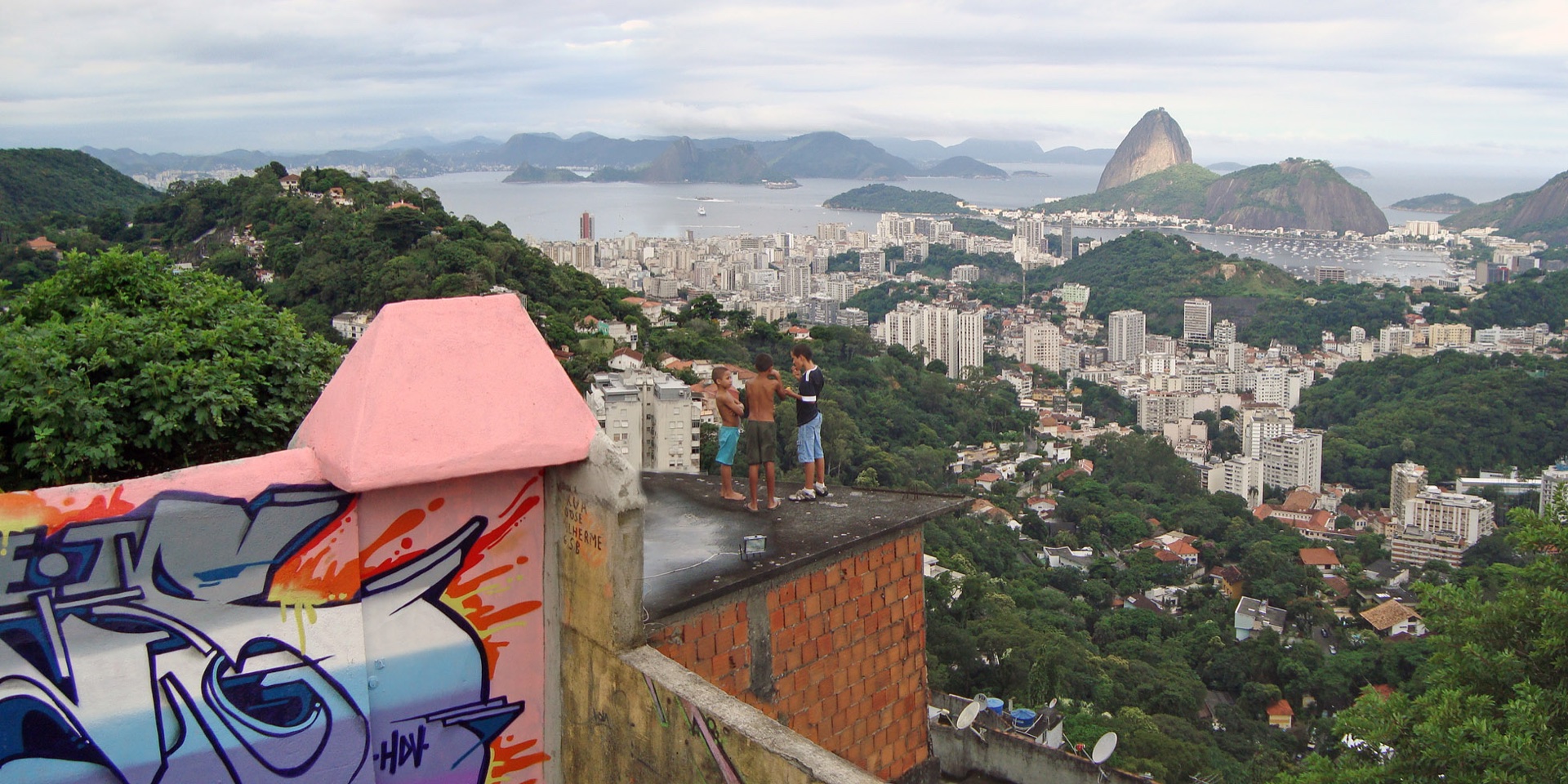 Your bio tells that you have started with graffiti back in the late ‘80, so you can be considered, hands down, a pioneer of this Culture… Can you tell us how did you see evolve this movement in your country and around the globe?

It was in 1988, there were few graffiti writers, but the cool thing is that the vast majority of them are still painting. It was very difficult to start here, lack of information etc … the first graffiti magazine I saw was in 1996; I don’t remember the name, but it was American, then some videos started appearing out ta bomb, and other local graffiti writers started making magazines and videos, today we have brands of sprays from Brazil, something that before was just a distant dream 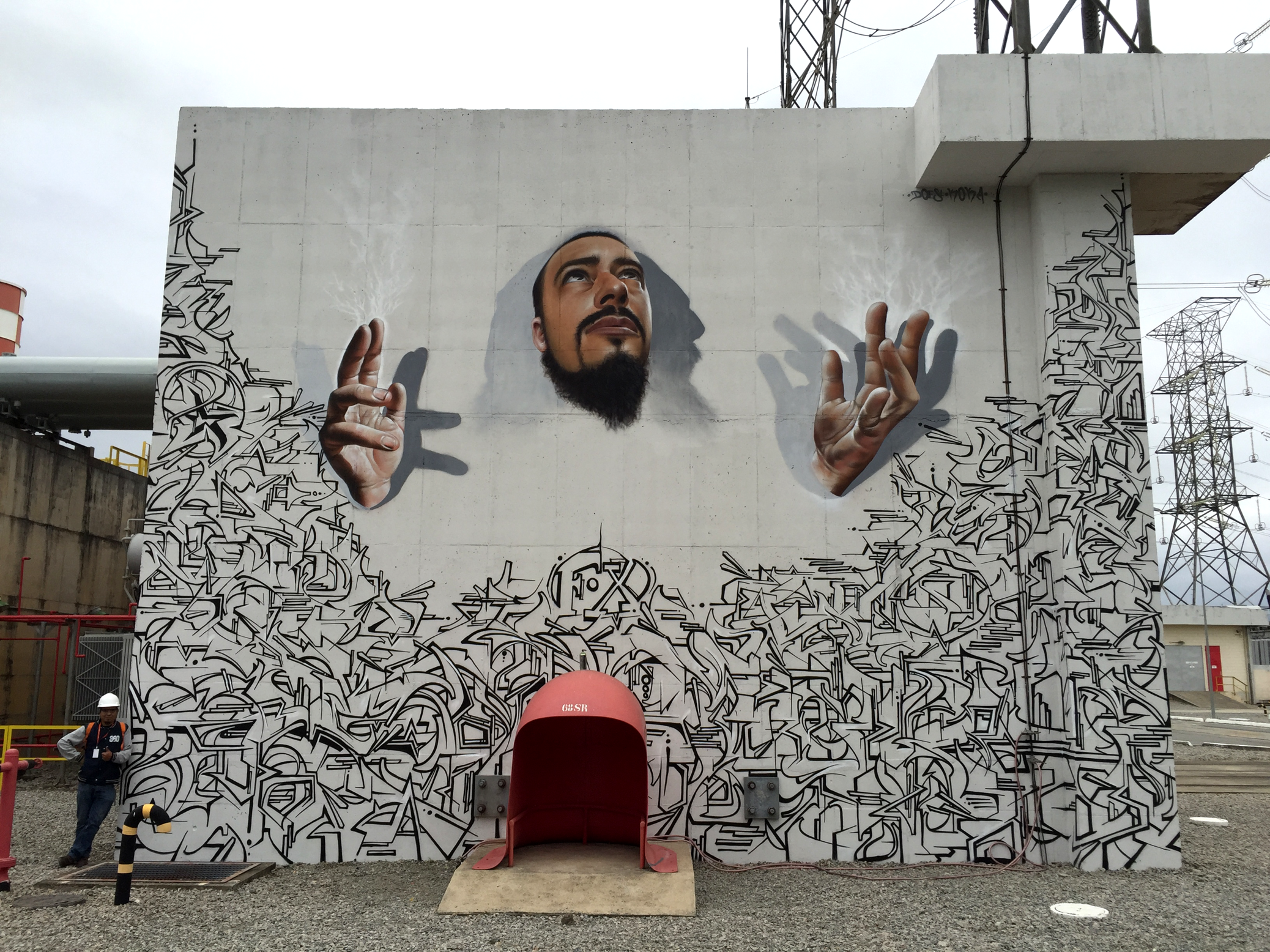 Where does your stage name come from? That’s your first and last or did you use other stage names in the past? What crews do you belong to?

I had other names at the time of pixação, I didn’t want to mix the 2 things. There is the HDV crew that I created in 2000 and I am also part of the ODV crew, where most of them are French, and I’m very proud to be part of the legendary FXCREW, from New York that today it’s 27 years old, and I believe it was a reference for many writers around the world. 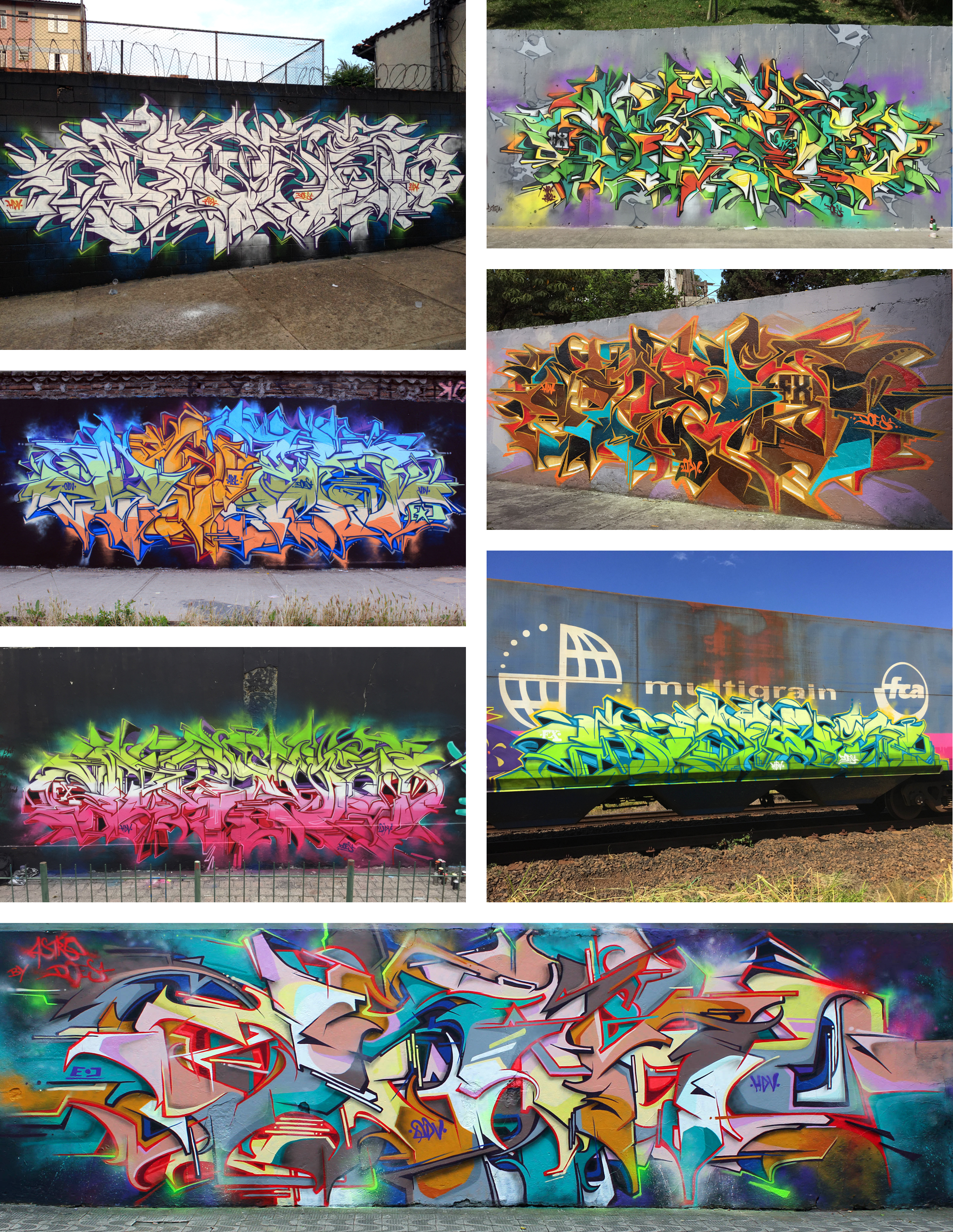 In your opinion, what are the main features that define your style? And how did your style evolve over the years?

I believe that evolution comes with dedication and love for what you do. My style developed and evolved because I loved graffiti, I never painted for fashion, nor for fame; fame comes from the recognition of what you do.

Something that defines my style I believe it to be, always making a sketch of what I’m going to paint, I always liked the more aggressive and extreme form of a letter, and the sketch process I believe you are more prepared for a wildstyle, I did a lot of freestyle , but I almost never managed to make the transpositions or the movements I can see on paper

Beside walls and sprays… what other supports and techniques do you like to use?

I make a lot of paintings for exhibitions and also orders. I try to keep it close to what I do on the street but honestly I don’t like to paint on canvases but I use spray cans, markers and acrylics. 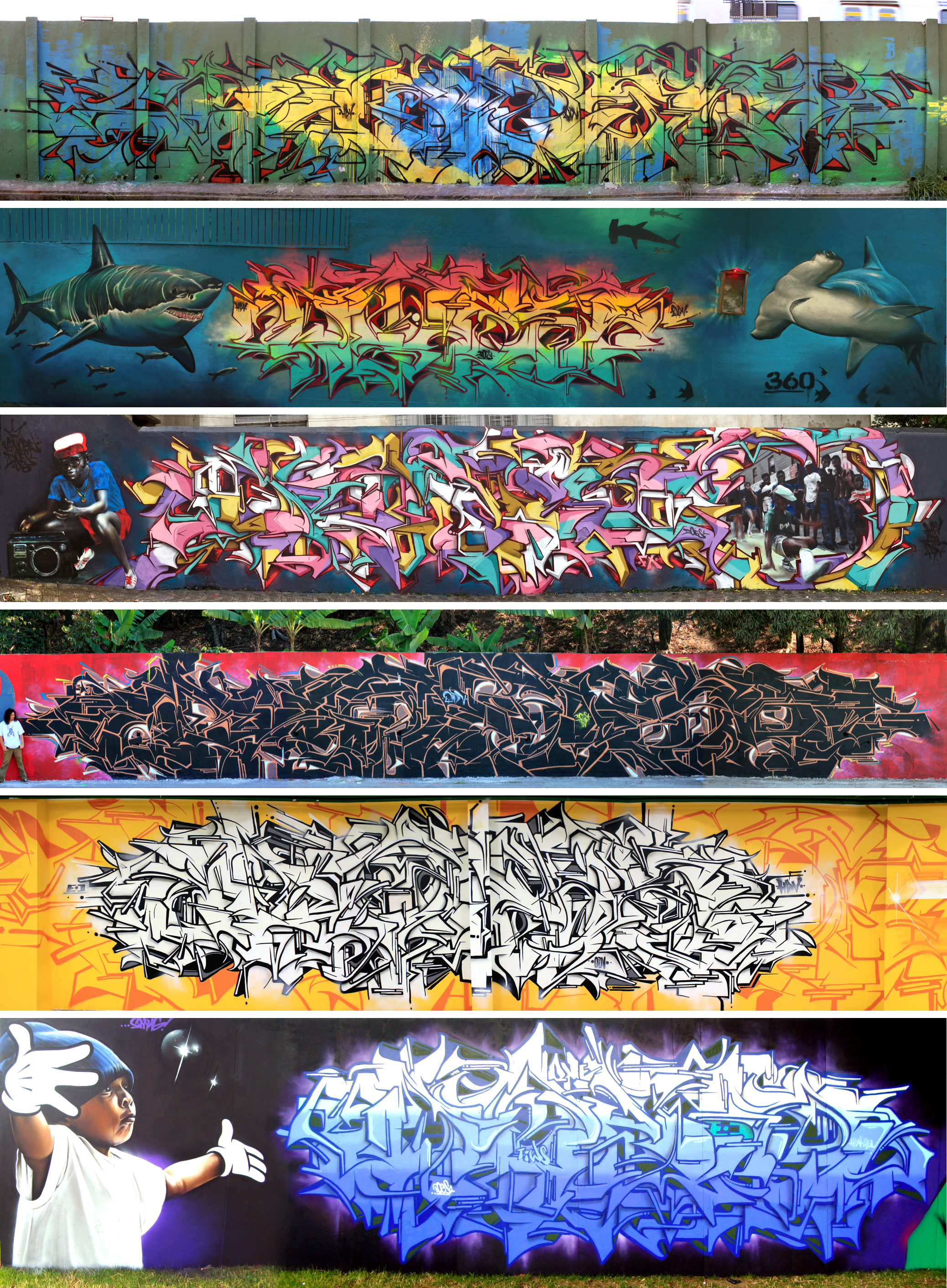 Did you travel a lot around South America and the world ? Where did you live the most exciting experience? In your opinion and by your personal experience, why does this culture spread so powerfully all over the globe in many different countries?

In South America, I didn’t paint only in Venezuela. I had some opportunities to go, but I never did while there are some countries where I went several times; in Chile was 5, Argentina and Colombia 3 times. I love painting in South America as the affection of the Latin people is incredible, I have also been to several European countries. I painted in Asia too and it was an experience where I enjoyed staying 2 weeks in Seoul; but the trip that most marked me was the times I went to Mexico, I stayed 2 months in total and speaking the local language made the trip more incredible. The exchange of culture must be the main point for this strong movement to emerge in many countries, the experience of meeting other countries is incredible.In total there were 23 countries.

● In your opinion are there any substantial stylistic differences between the various areas of Brazil? Which ones?

Yes, it does exist and in a very remarkable way. Brazil is a country with a lot of regional culture, and each region seeks to explore it. I made graffiti in almost all states of Brazil where each state has a different culture. 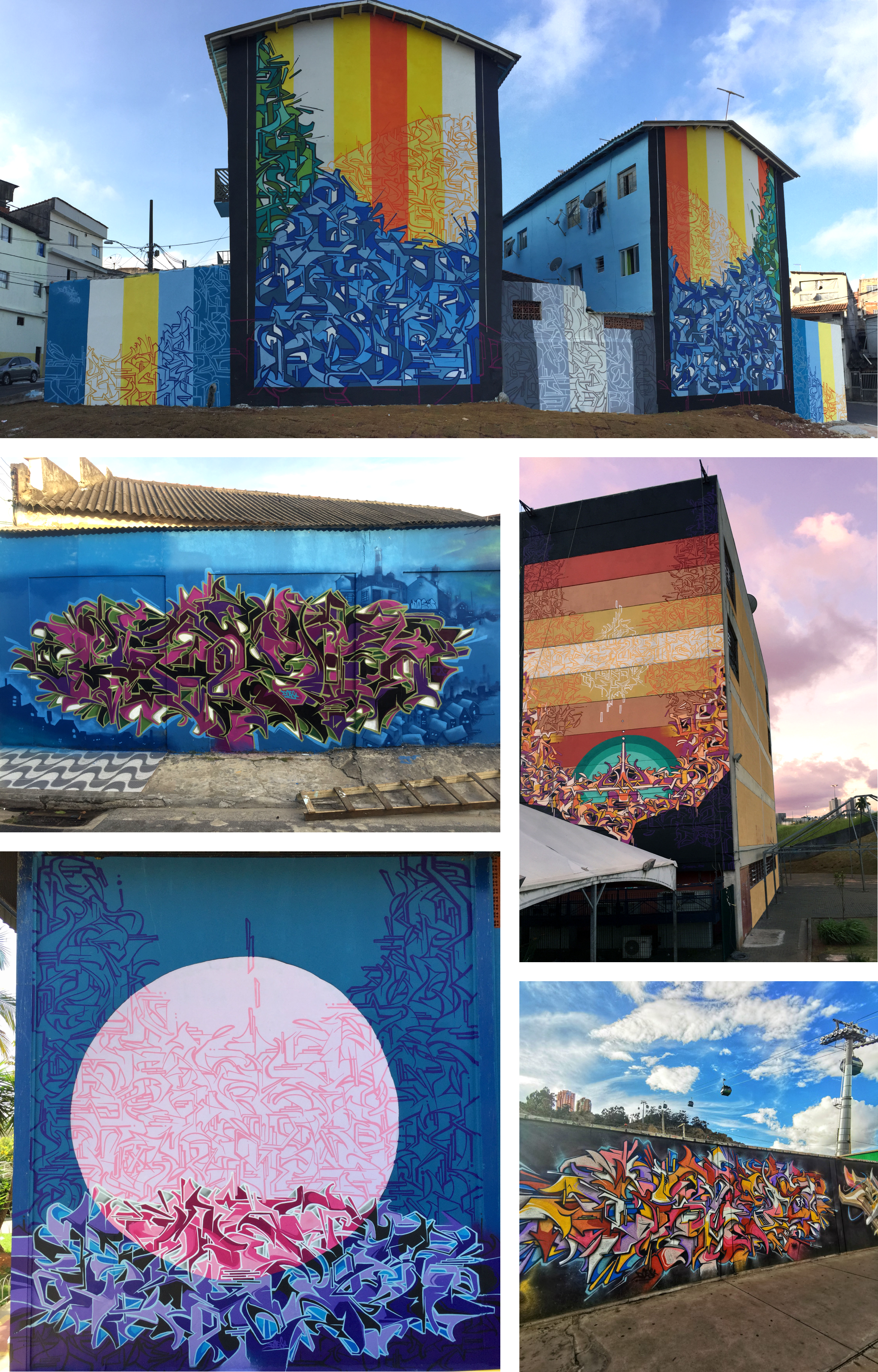 In your opinion, which are the main characteristics to be defined as a great graffiti writer?

For me, the main one is the character, humility and respect for others as without them you can have one of the best styles in the world but I will not respect them.

Which are your biggest interests apart from graffiti?

It’s been many years for me that I’m in this world of graffiti and almost everything you think comes from graffiti. Today I am more homely than before, I really like to stay at home next to the family, to go to a place to tinker with planting and I really like to cook.

Since the beginning of the year, I think that Covid19 changed many people’s plans.Today I just think about going through all this and about plans, we don’t know what the journey will be like after this pandemic, if we will be able to travel, but still I want to visit many countries.