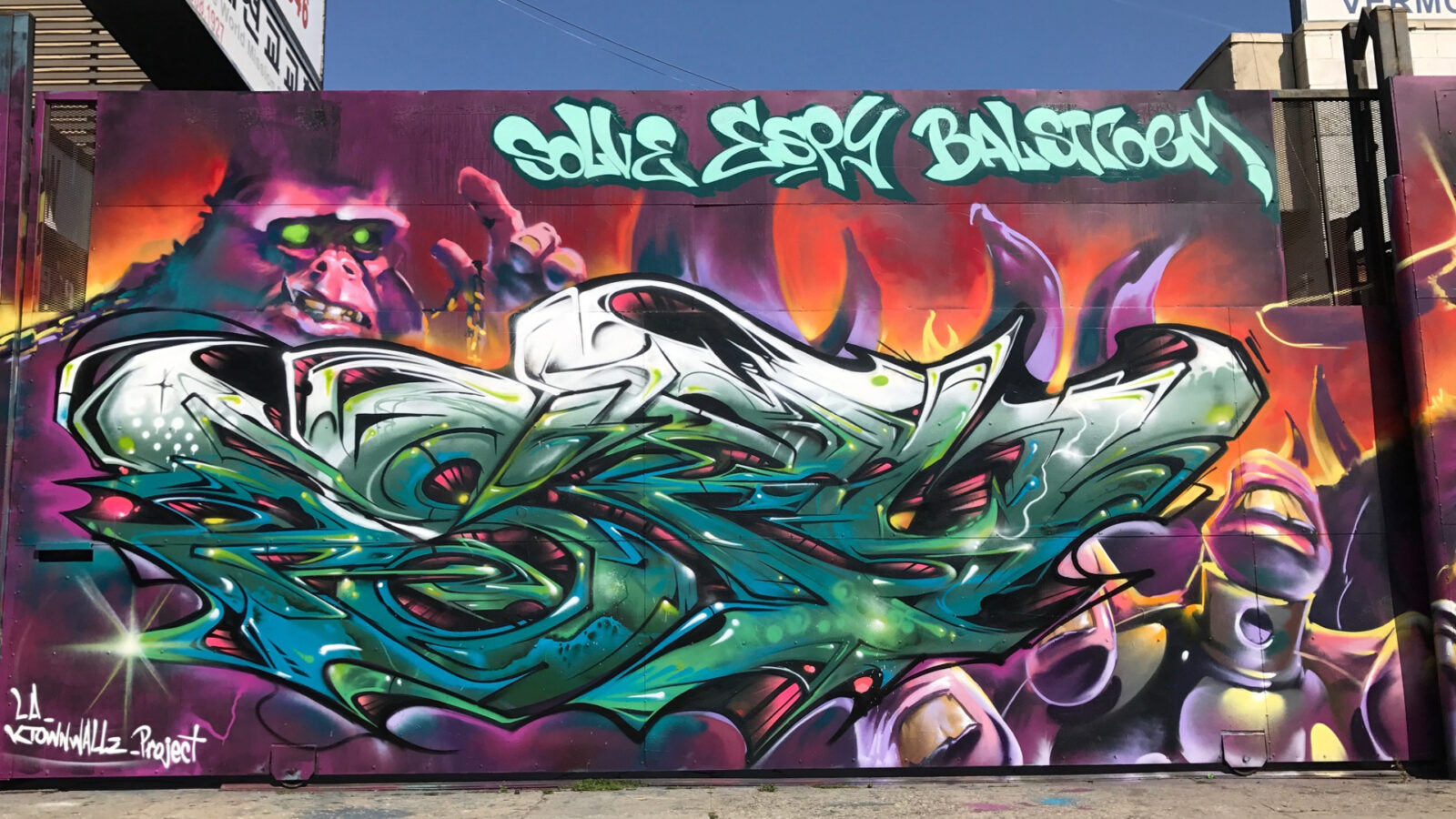 Hi Espy, first of all, thanks to be part of the project and for the time of the itw. First, we’d like to ask you when did your passion for the graffiti culture begin and how did you get into it.

I grew up in New Jersey and got my introduction to graffiti through my older brother of 2 years. Then got my hands on my first magazine 1997 Scribble and saw that you could get fame through art and I was hooked. I saw Att, df crew, msk crew and 3A and was inspired to get my buddy’s together and start a graff crew. Dpt crew.

While we are talking, around your city (L.A.) and in all the States too, protests and legitimate anger of the Afro American people (and not only) are going on against racism, social disparity and police abuse … as we’d like to learn more about the social situation would you like to tell us with your own witness what’s really happening in the other side of the ocean? Do you reckon graffiti and art in general can contribute to this fight against racism? What about?

So difficult to explain. I can recommend some documentaries and other documents that might empower people to educate themselves on what’s going on in this world but as far as Americans there are so many sides to the story. I can’t comment on what’s going on. Our government is trying to take over the world and graffiti is not doing a lot more than making murals that remind people of the injustices to so many people of colors. Friends of mine are some of the biggest blm movements as the visual artist but in retrospect we are still focusing on our own well being instead of the humanity that needs to be more present. I could speak at length about it, but my opinion doesn’t matter. It’s what I do to help others daily that matters most. 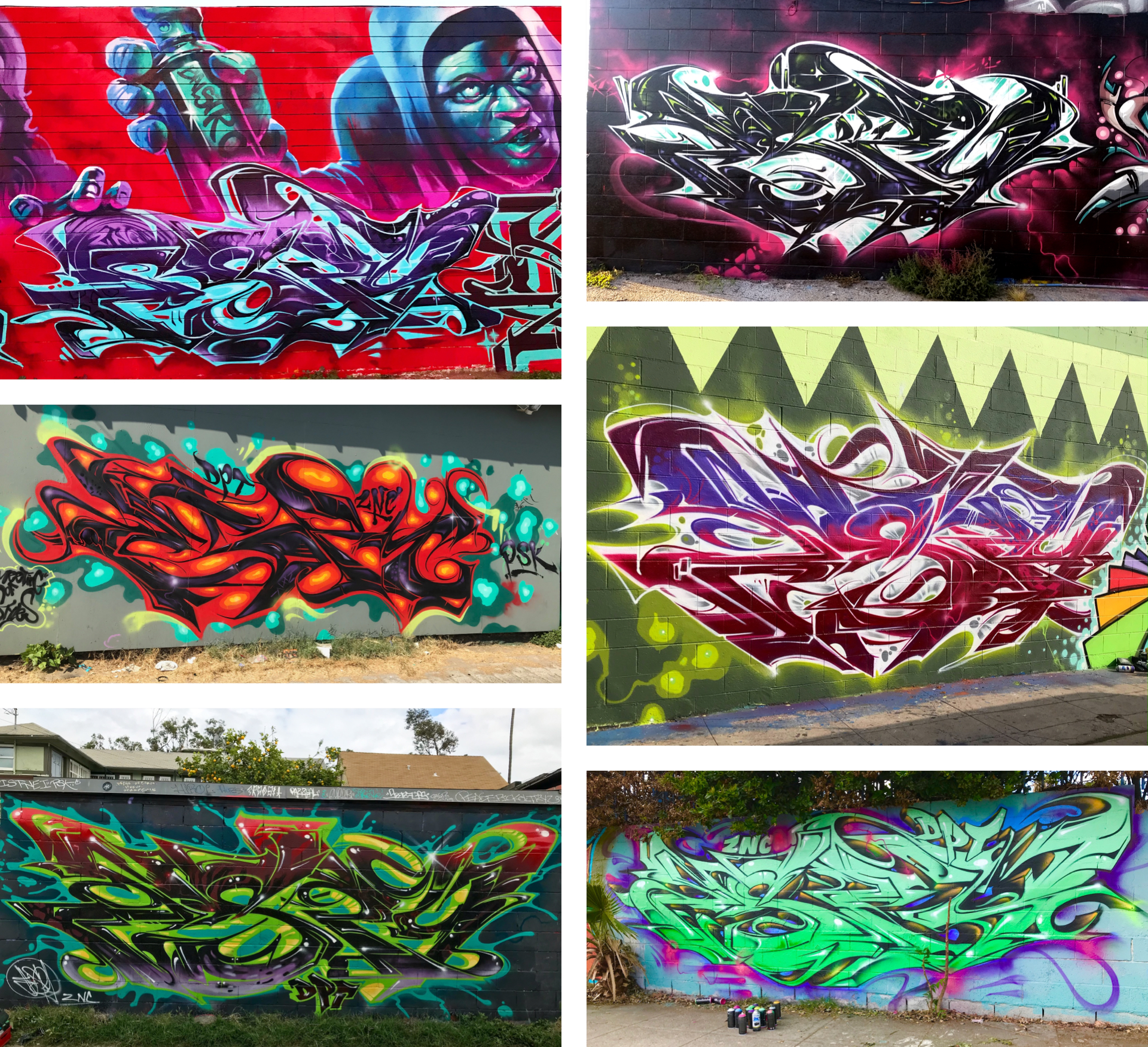 How has your style evolved over the years? Where did your passion for figurative art, especially of animals come from? Beyond walls and spray, which kind of supports and techniques do you prefer?

I’ve been painting since childhood, so I’m traditionally practicing acrylic painting and oil with a background in illustration, airbrush and a multitude of other mediums. But since I discovered graffiti it was a more expressive art form that’s what drew me to it. There are no real rules beyond a few walls that we keep up in our minds. My style has always been influenced by European artists. So, I originally started doing 3ds and moved to wild style over the years, which I enjoy way more to separate the fine art rules of realism from the painting process of graffiti. In the past years living in Los Angeles I created an art district I call Ktownwallz Project. Thousands of international and local artists paint at for about ten years now. Having the opportunity to share with my community has helped me grow as a graff writer. Being around other writers that are better, forced me to step my game up. No excuses, and beyond that I am a fulltime artist. Music videos, sets ecs and I do murals and paint canvases for commissions and for pleasure.

Do you belong to any crew? How did you get part of it? Would like to share any memories linked to them?

I am the co-founder of Dpt which has not that many members all from around the world. Sister crew to Znc which I’ve been in for like 20 years which is also an international crew that is very successful . The main guys from Znc are members in Dpt as well, Katun, Slacsatu, gore styles….and Psk which is a Los Angeles based crew but also has international members. I was recently put down with Psk crew ‘cus they are like family to me and they always have my back. Crews to me, are really just people you are happy and proud to call friends.

Did you get inspired by any local or international artists since the start? In your opinion which are the biggest graffiti artists in the L.A. scene?

I was heavily inspired by 3Acrew and Fx crew Cnskillz and Swedish mobbers like vim Moas .3d artist from Australia Iree and Kes who is fx crew as well. Suk crew there are so many. I feel the only way to be a good writer is to know who paved the way to your existence. As far as the killers in Los Angeles now Pegas Kog Lts is the best all-around graff writer in LA he does it all. Sauter Kog Lts is the billboard king of LA and just about everywhere else too. Also, a spectacular fine artist as Solver Jhf Znc is the most technical and clean. Phosl bamc is great too all around. Versus Kog Lts active always, many styles. Jesme on top of that bridge walkout game. There are a lot of dope writers in LA it’s super active, but these guys stay active doing the most in my opinion with absolute style. I’m every piece they drop. I am happy to call most of these dudes friends with exception to phosl . I don’t know him and I like to think I’m objective ‘cus I know a lot of LA writers as I organize graff events. 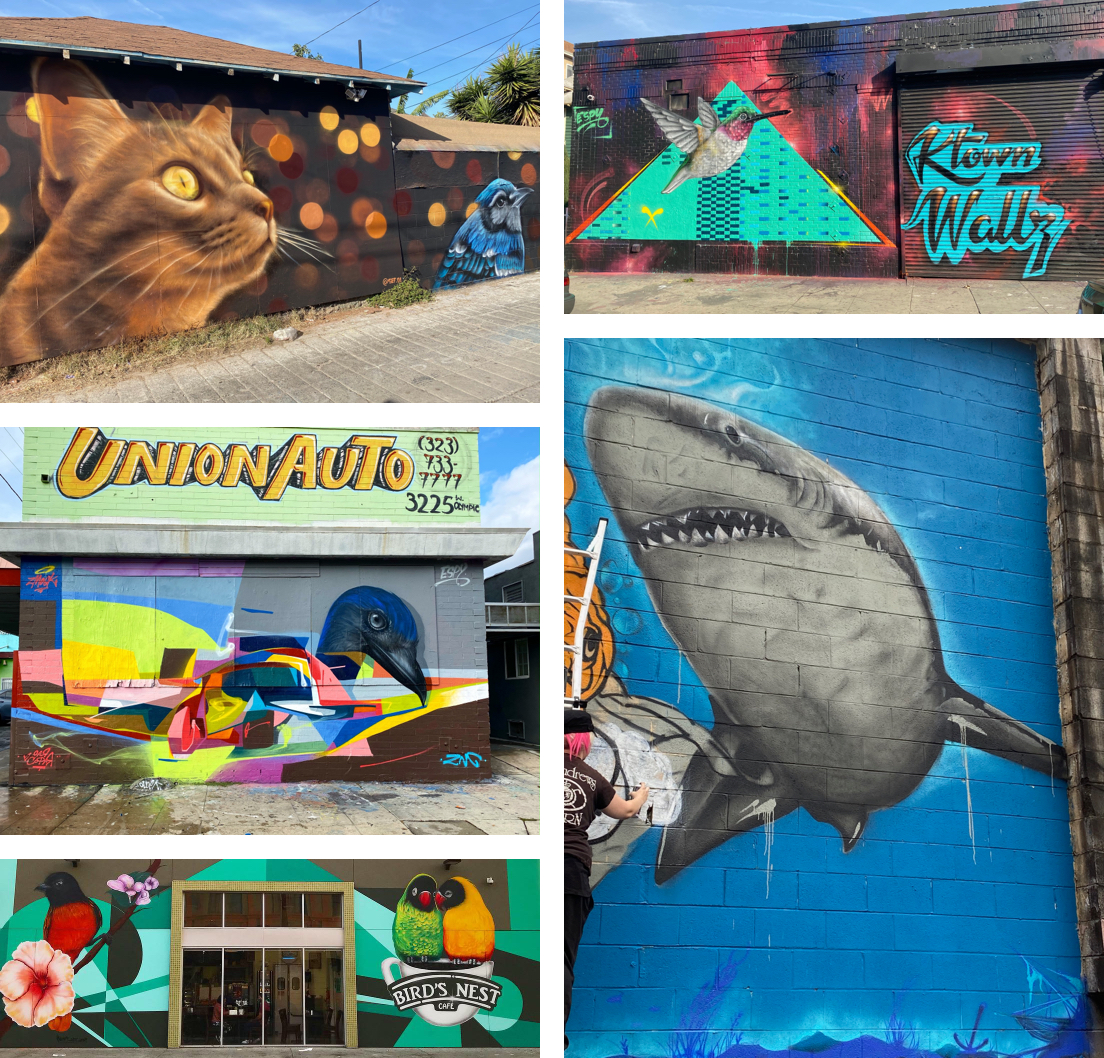 In the past 30 years, the graffiti culture has changed, becoming less “criticized” and sometimes more commercialized, but at the same time, many people say it has lost his distinctive essence of social “rebellion”. What do you think will be the future of this discipline?

A good amount of graff writers, even ones that have painted for many years do not have a grasp on how to make money off of it. So, there will always be a separation between different artists because of their own personal relationships with the art form. People will always bomb. People will always post stupid bills or wheat paste people will always just do trains and just do billboards, and just paint legally or just paint illegals. So, their game will not change that much I don’t think honestly. It will still be raw in the very essence of it but people will grow and change as they get older and so will the personal relationships with it. I have personally seen some artists I love, go from just painting illegally to just painting legal in those 30 years. They are older and their family won’t let them risk it for whatever reason . And there are OG’s that still go to all the events and still paint illegals daily.

Tell us about the graffiti movement in your city: are there any graffiti events happening around? How has it seen the “illegal” graffiti situation? Rather than this, is there any opportunity to turn this passion into a real job?

Before all this quarantine there were small events pretty much every weekend. I organized a meeting of styles Los Angeles which hosted 250 +writers this most year . It was nuts lots of illegal painting but since I communicate with the city I was able to keep people from getting busted at the time and their art has stayed up as I was able to show them the value in it and mainly profitability for the city to let us do it . Graffiti and street art are mainstream now in a lot of ways. So, tourism goes up, businesses get more traffic and patrons and property value goes up, crime rate goes down. It’s pretty good for everyone if you have a good spokesperson to represent you. I work with a number of international and local artists that make a career out of this. So yes, there are plenty of opportunities to make a living doing art and even just graffiti here.

What is your greatest artistic ambition? Do you have any future plans along the way?

I plan on painting big scale murals and traveling the world hopefully. In the meantime, I am a cofounder of a nonprofit org that uses murals and artists to raise awareness for autism. Amuse4autism_foundation and currently do artist consulting and development for my graffiti and art community. So I’m on the path to my goals for sure.

Did you get any lesson learned from this culture?

Almost everything I know I learned from this graffiti community.

I believe music is a driving force in my work. I can’t paint without it as most of the time the city is so loud but mainly grime artists and electronic or jazz. I have a pretty extensive history in music as well, so lots of stuff.