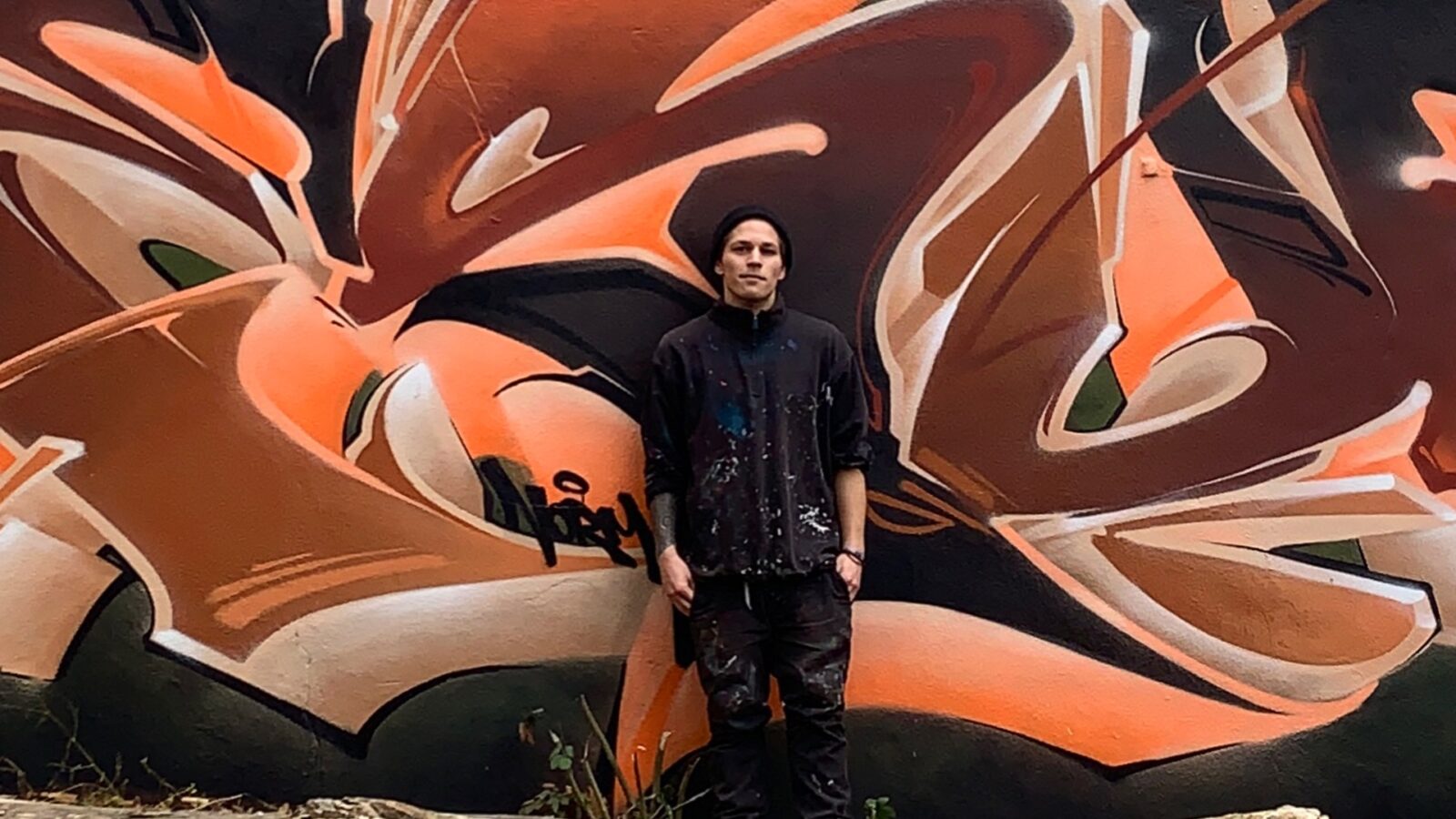 Hi Desur, it’s a pleasure for us to be able to interview. First of all, can you tell us, how did you approach the culture of graffiti and Hip Hop? How was the graffiti scene in your city when you started?

I was fascinated by tags and graffiti all over the town when I first noticed them, while driving to places with my family. It must have been around 1997. Two years later when I went to middle school I started tagging myself through new friends who got me into it. We tagged the inside and outside of our school and the bus line 91 who took us to school and back home. Thinking back to that time, in my eyes the graffiti scene was just at its beginning, but I already noticed some crews that started bombing the city. 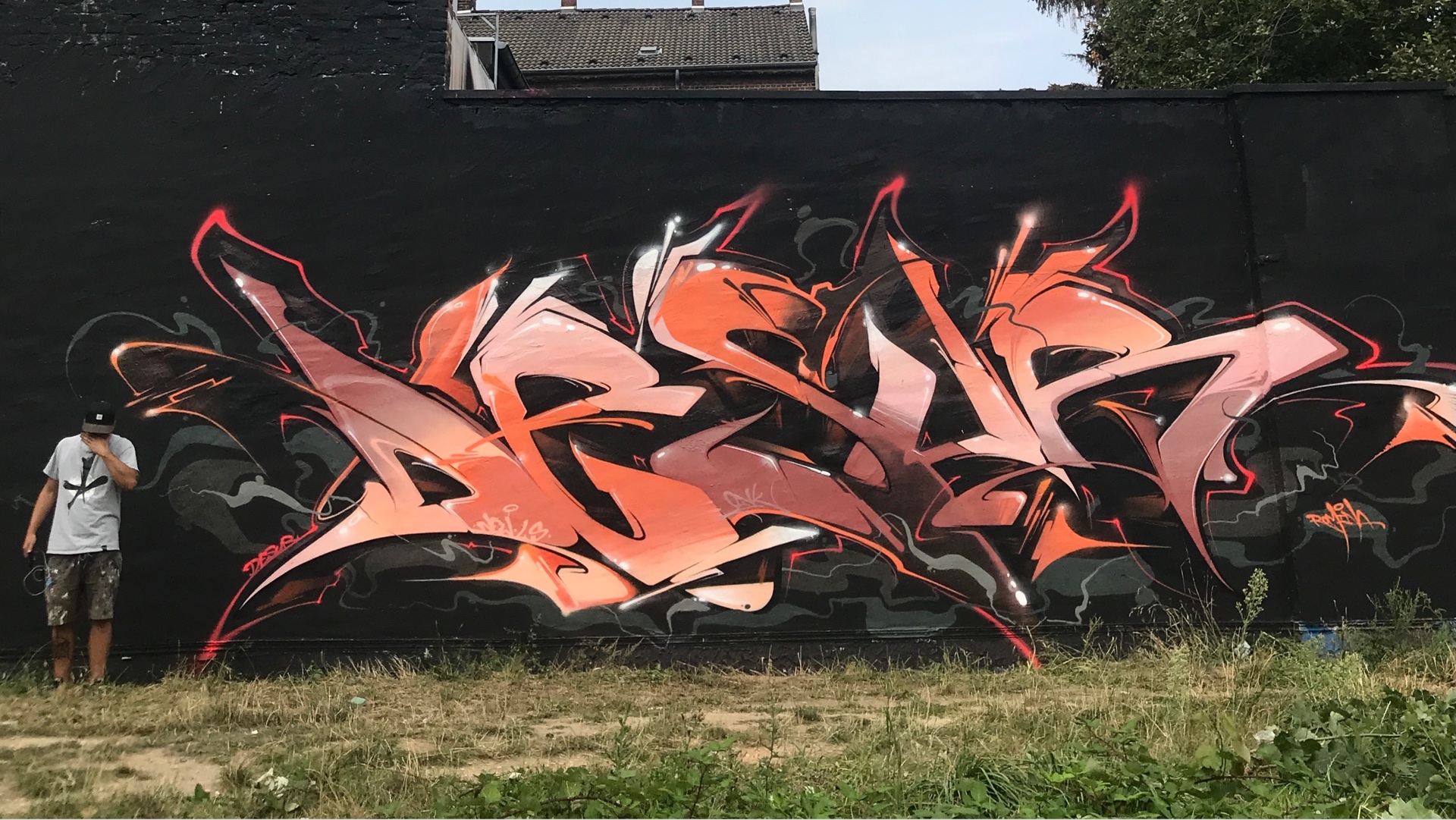 In the year 2000 we moved to a new suburb and through skating I got a new friend which was a few years older and showed me a mixtape of Prinz Porno. His music was totally new to me but I was totally stunned by his style, because I only knew what was on the radio. One year later when we got an internet connection at home and I was able to get more into Hip Hop as I really fell for it. Still, it took me until 2011 to meet the first ones who were painting with spray cans and I drew my first piece then. In the meantime I was only skating and tagging.

Can you tell us about your crews and their history?

I started in a crew with mostly illegal activities but a few years later when stopped doing illegal things I joined the Loyals crew (LS crew) which formed in 2008. We all know each other since early childhood days but got back together through graffiti. In 2019 I joined the NEW crew who I got to know through two friends from my hometown Kiel, who also just joined before me. This crew is made of people from different Cities (Kiel, Hamburg, Rostock, Berlin) who value the time on the wall and focus on big concepts instead of ‘’loveless quickes.’’ In 2017 the Born to Script crew formed and I joined two years later. This is a worldwide crew that focuses mostly on letterings, especially tattoos but almost everyone who joined has a graffiti background.

I would define my main style as a semi-wildstyle, but sometimes I also like to keep it simple and easy. The most important thing is to have enough flow and dynamic in each piece. Style Writing was always the thing that fascinated me the most in the whole graffiti game and after trying a lot of stuff, I think over the last years, especially after I changed my name from AFOS to DESUR I kinda found my style. Back then I was trying to do everything symmetric but it was difficult with the old name because of the letters itself. So I got kind of stuck with my style and decided to change my name and do a restart. There are still symmetric parts now but overall I just want to have a well balanced and harmonious piece. 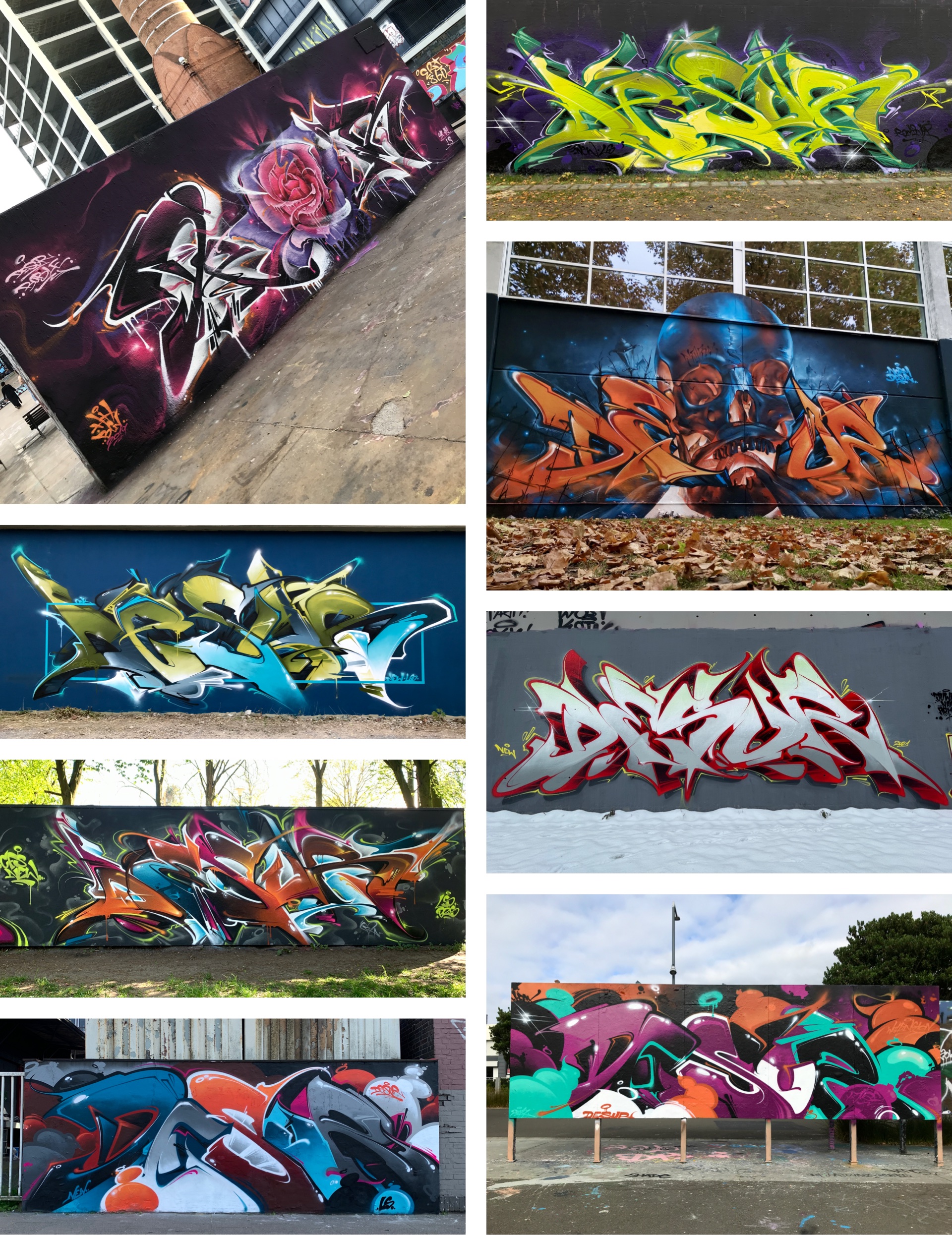 In my letterings I made the most visible progress. I started with typical Chicano handwriting styles but it was not well balanced and the flow was strange when I look back now. I practiced days and nights over years and also combined more and more graffiti influences in my letterings. I created my own styles by mixing stuff together to create something I can call mine. Furthermore it’s especially the technique that evolved a lot. Not everything is looking good on the skin and of course you need some knowledge to make a nice graffiti tattoo. Otherwise it’s not looking real or not the same as on paper.

Tell us about your passion for tattoos and when did you start working in this field.

My passion for tattoos was always in me….when I grew up my dad and his friends were already covered in Tattoos and I remember to find it super interesting as a child. When I was older and already into graffiti I started to get tattoos by myself and friends and also other graffiti writers started with tattooing. When I visited a friend she was just about to tattoo herself and I asked if I could try it out and so I was doing my first line and it was the same feeling like when I did my first line with a spraycan. I was so stoked about the craftsmanship and thought that’s what I want to do.

Two years later with a lot of passion, hard work and a hint of connection I got an apprenticeship in my hometown Kiel, in 2014. After a few months of just watching my mentor, cleaning and managing the studio I did my first official Tattoo in January 2015. Now 6 years later I still have the same feeling with every first line on new skin and I just love everything around it. It’s so nice to be able to make a living out of what you love, to travel around the world and be able to work everywhere. To meet, collaborate and exchange with other Artists and just to be your own boss with no rules. 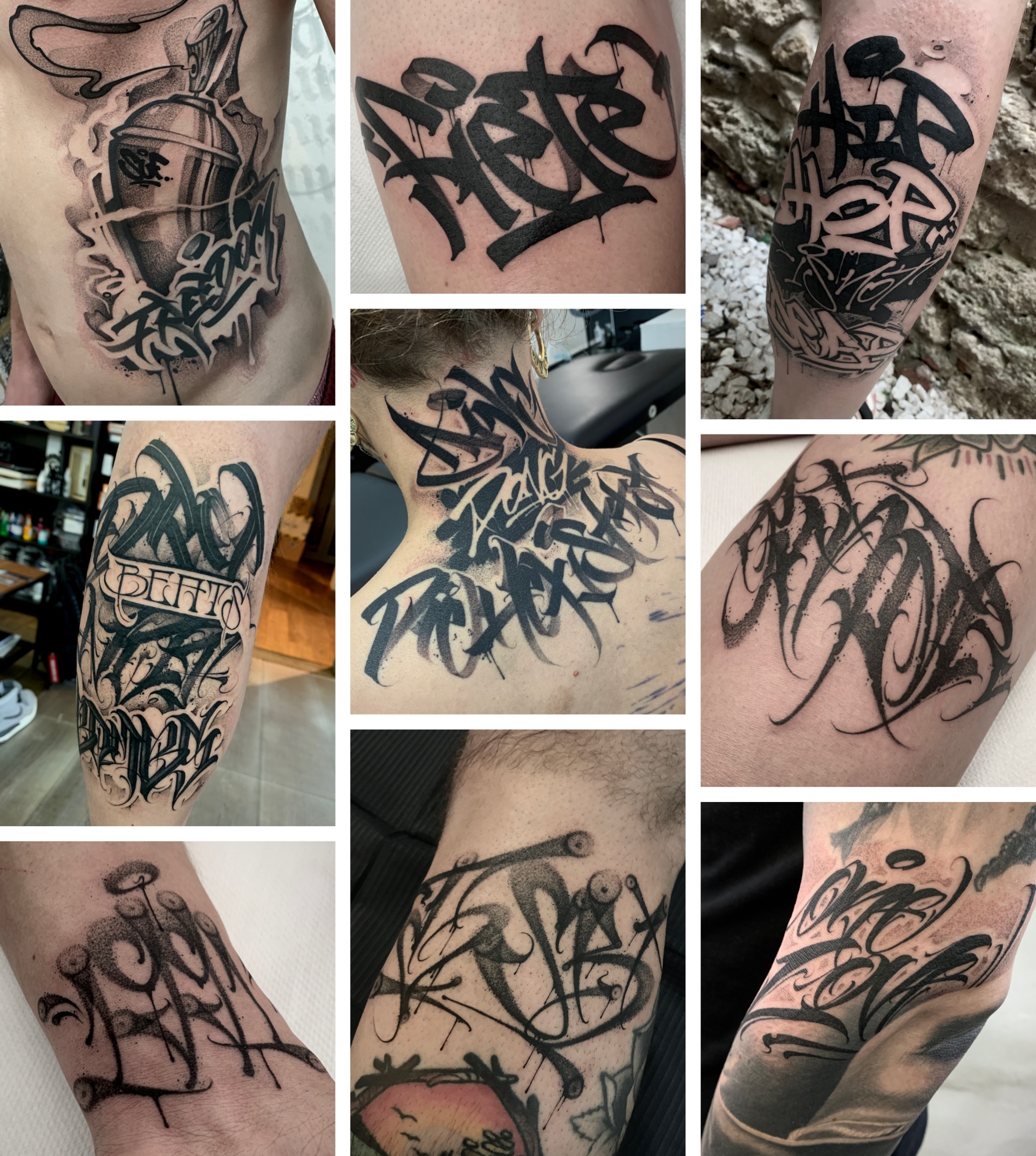 Did you notice any mutual aspects passing from walls to skin?

There is one similarity which is that I am able to tattoo tags, which sometimes are made up on paper or walls but first of all, as stated above, not everything looks good on skin as it does on the wall. For example, that the forms of letters are changing on a living body and you have to keep that in mind. That if you tattoo a circle on a round body it will not stay a circle. Even more important is that the technique is completely different from wall to skin. What takes a few seconds on a wall, needs hours of work and a lot of patience so it has the same effect.

What’s the greatest goal you feel you have achieved thanks to writing?

Actually it’s simply make a living from my passion.🤙

What is the state of graffiti culture in Germany, in your opinion? Who are the strongest writers at the moment?

You can’t really differentiate Germany from other countries. We got so many writers and there are new ones coming up each day! Through the internet we are all connected and updated and it’s great to see this community grow all over the world.
Spoare, Median (Now Medas), Pork, Phet, Skore 79, Ohm, Mobar, Smoe, Norm, Twik, Pout, Semor. 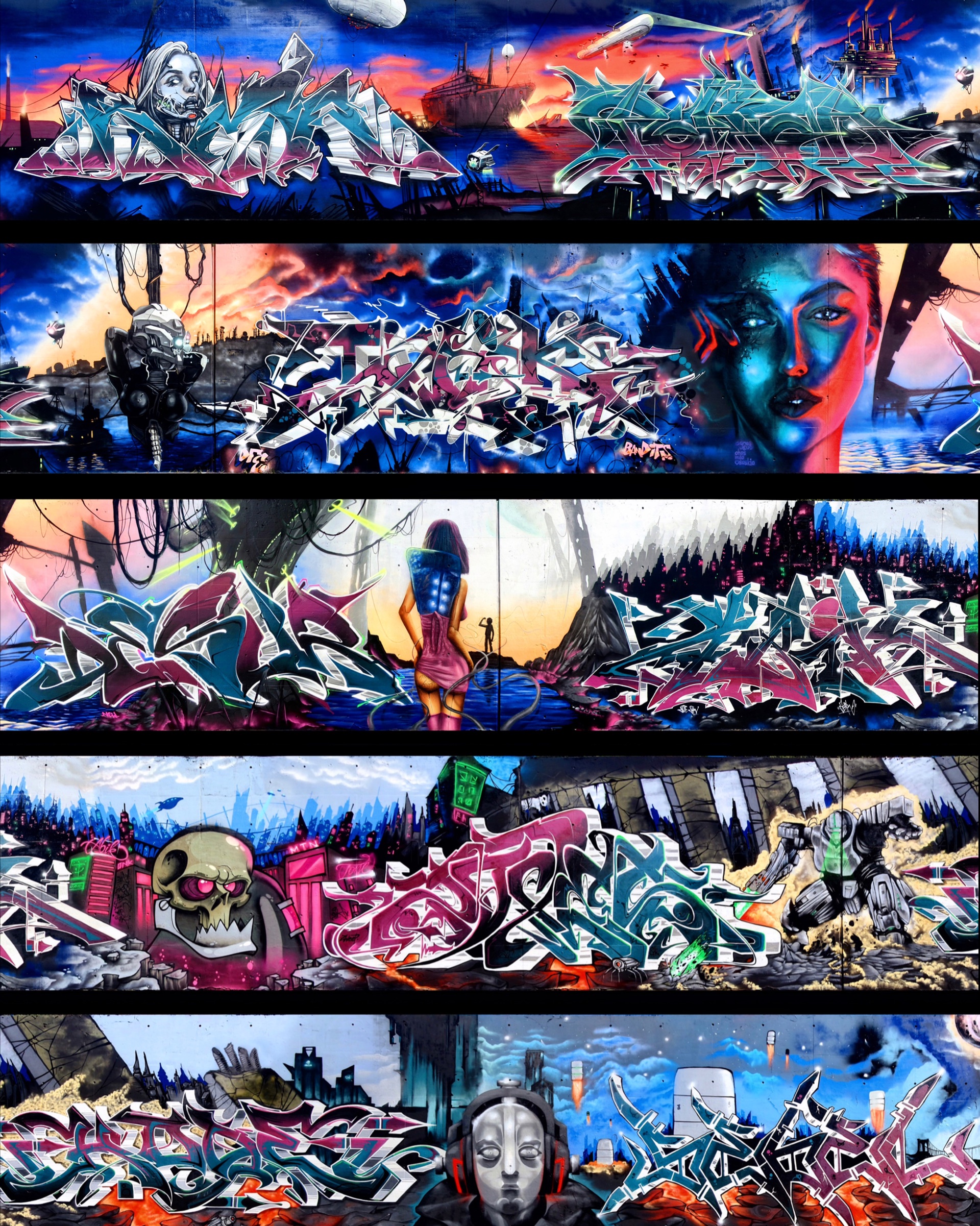 When international graffiti events could be organized again, which one would you like to take part in? Do you have any particular memories of the one attended?

I would love to take part in some MOS events worldwide and of course at the Urban Giants in Italy, Pow Wow Hawaii and Roskilde in Denmark! There are some national events I’d like to go to such as the Schichtweise Jam, which I was invited last year but sadly it got cancelled due to Covid. Actually I had the best time at all events just painting a huge concept wall with my crew or with people I met while traveling, but the Next Level Graffiti party close to Barcelona was one of my highlights so far! The guys from the Petados crew welcomed me like I was family and I felt super honored.

Apart from the world of writing and tattoos, who is Dustin a.k.a Desur and what does he do in daily life?

Honestly almost everything I do is connected to my art. I love traveling as I am an outgoing person, but being a workaholic I always keep my eyes open for the next chance to connect with people, work together and have fun! Due to Covid that of course changed a lot! In lockdown I spent as much time at home as I never did before! Still I worked on new projects like my graffiti brush sets for Procreate but besides that I found some time to have fun baking, cooking and playing Skater.xl on the Playstation. Luckily I’m in good company of my girlfriend and our two cats, who always keep me busy.

Would you like to add anything else that we did not ask you?

I can’t really think of anything more to tell you but I feel very honored and flattered that you asked me to be interviewed! I am very excited about the future and what else to come! 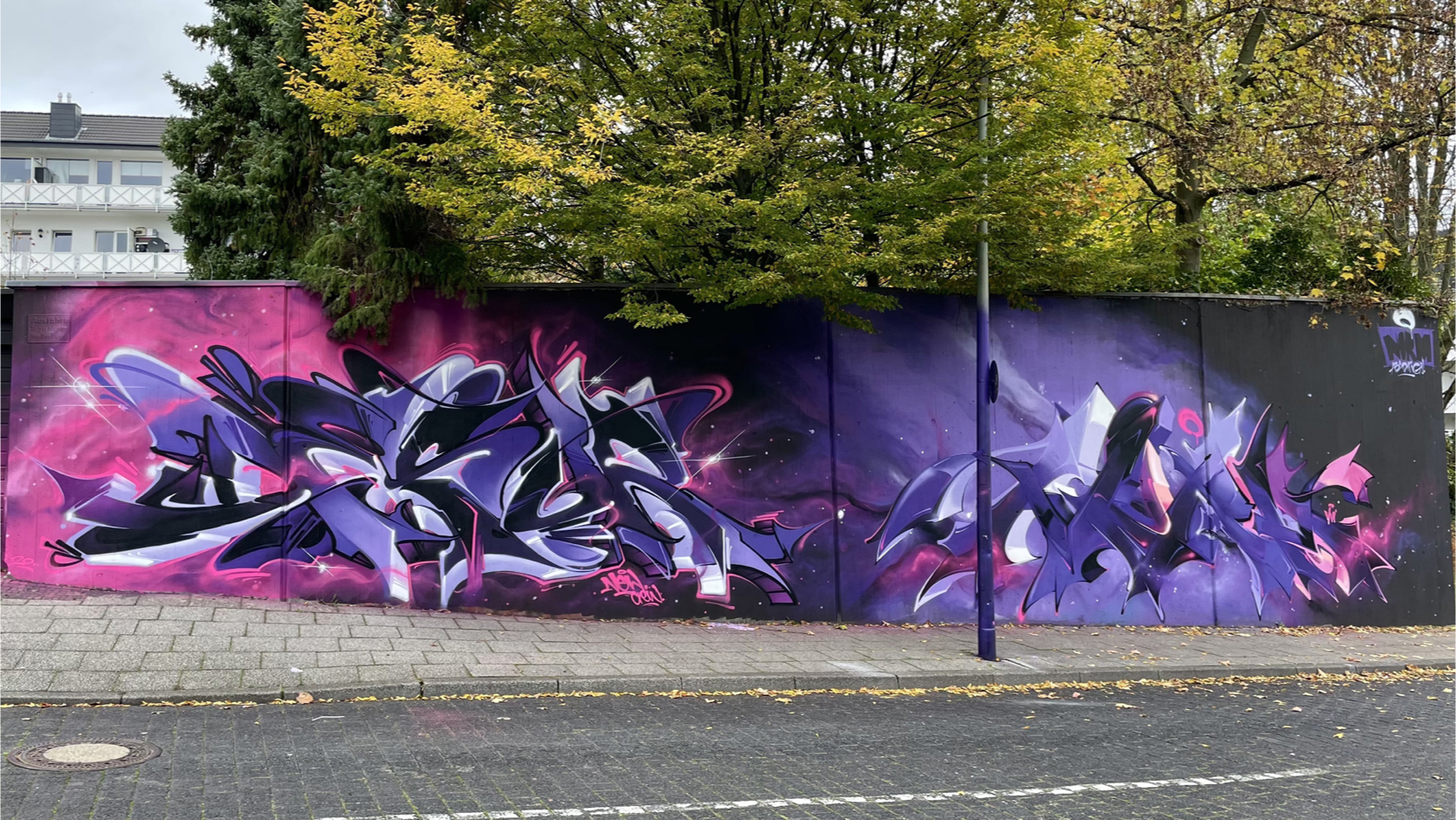