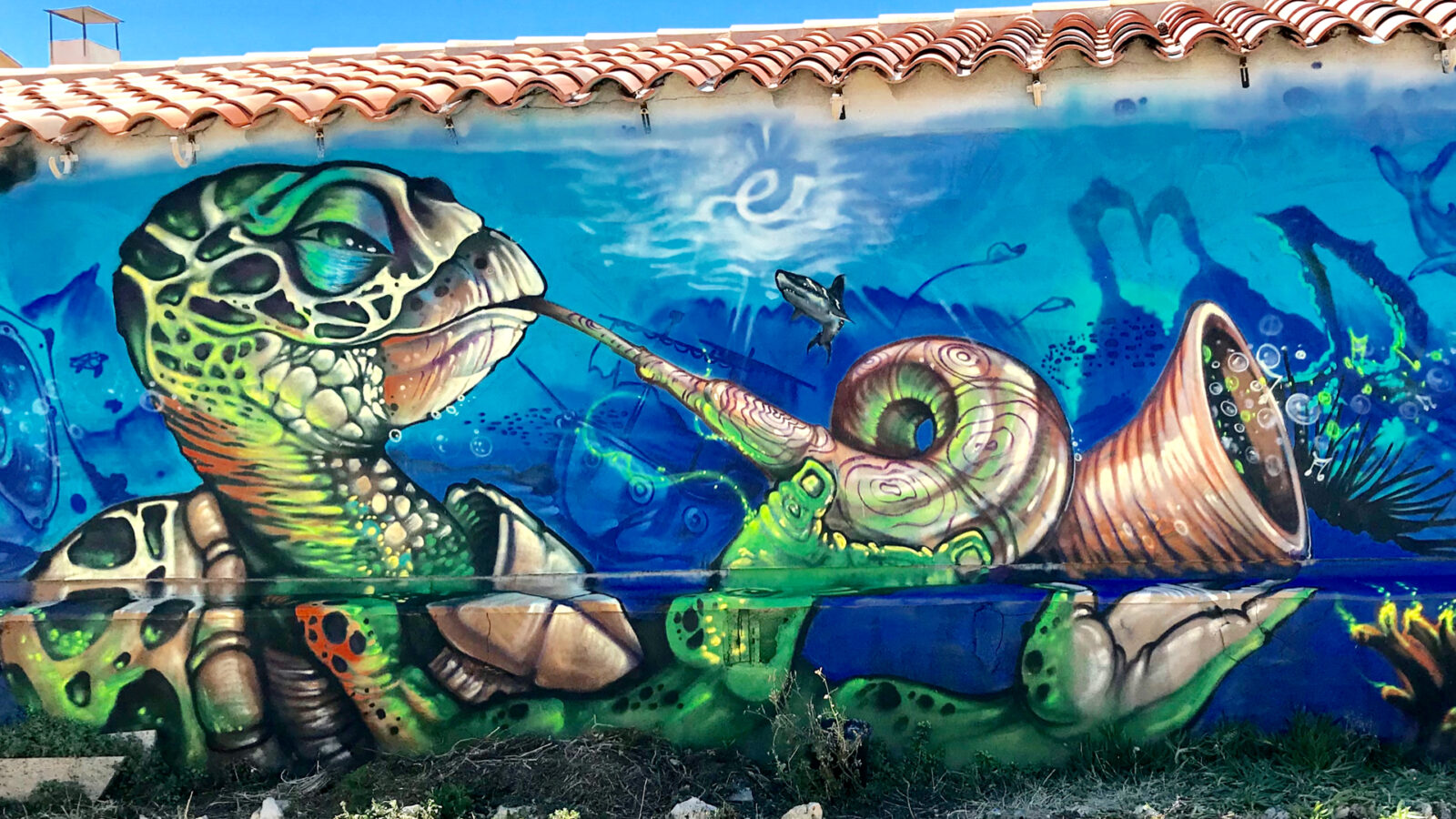 Hello brother! Pleasure for us to be able to interview you! Would you like to start by telling us about your origins: where do you come from? When did you start painting and why?

The pleasure is mine to be able to contribute with you guys. I’m raised and born in Distrito Federal (Federal District) Brasil. I had my first contact with Graffiti in the city where I currently live, in Ceilândia , this city is one of the responsible for the birth of Hip Hop in Brazil. I could breathe Hip Hop and street culture by the time I walked the whole city on my skateboard and who saw a lot of Pixação and some Graffiti, I recognized some tags and Pixação from some homies that already painted.

I didn’t have a lot of expectations in my future as I had already surrendered to the difficulties the young people of my age had, in the context we lived. It came to a point I had to avoid certain places due to problems I had with the police and at the same time walking by a magazine shop I bought my first Graffiti magazine and then everything changed. I started to look for information, I draw everyday.  Two months later I painted during a vernissage from a “Keith Haring” exhibition, this universe consumed me. I didn’t ask to enter it. It chose me. I’ve never understood why I do what I do , I just do it. It’s instinctive like an urge to paint and draw. 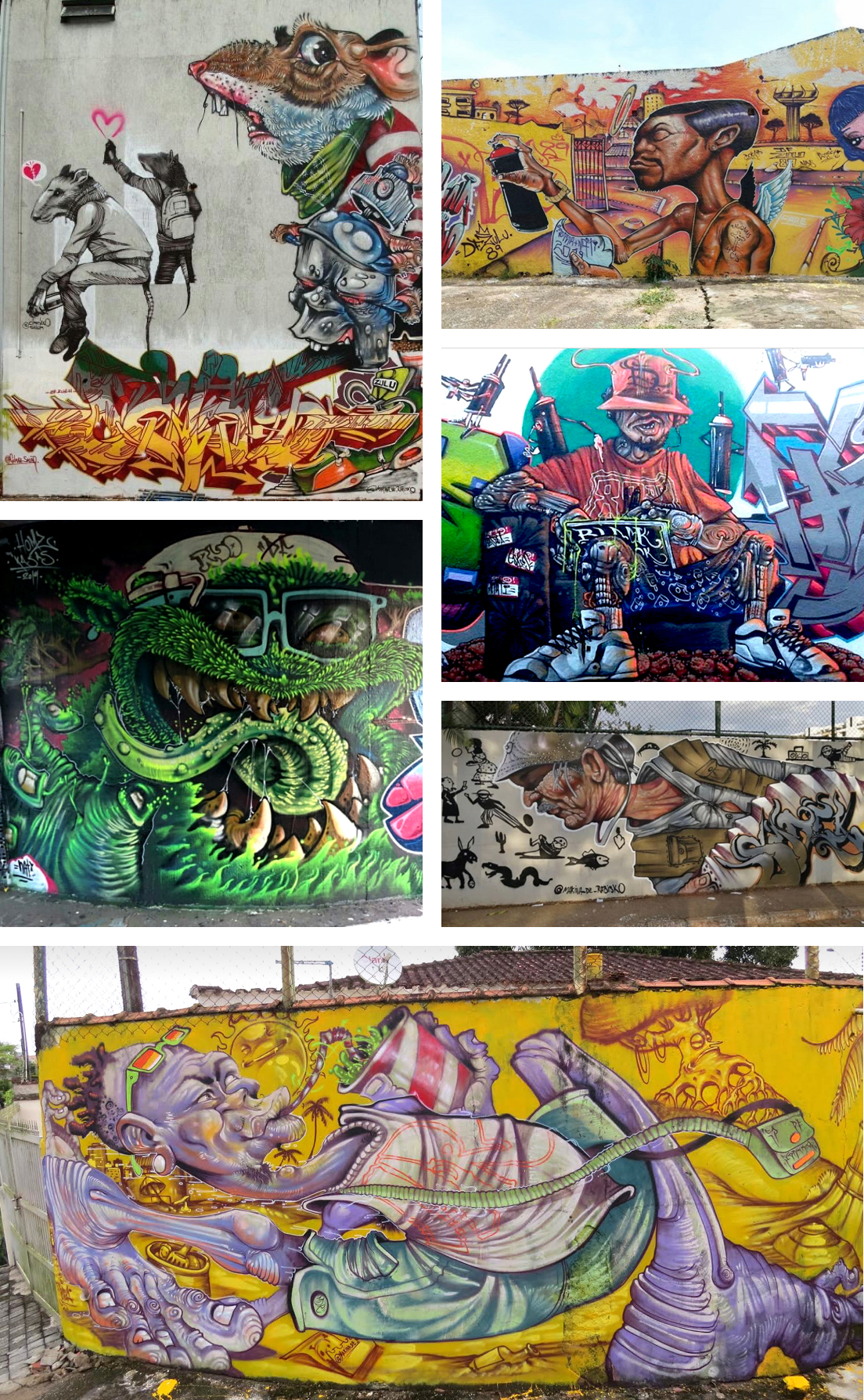 Tell us about your alias (name)! We’ve noticed that you have different tags, as Soneka and Makina de Rabisko … Can you tell us the difference? What’s the meaning behind the two and how did they come up?

This question is great! Soneka translation is “Nap”, and it’s because I used to sleep a lot and I look like I’m sleepy all the time. This nickname came from my teen ages, Soneca is one of the seven dwarves of  Snow White, the one that sleeps a lot haha!! I’ve always liked having different tags, there was a moment where I wrote Skunk, when I was doing letters. Makina de Rabisko translates as “scribble machine”, and it was born during a period where I wanted to take things more professionally. First I started an illustratration group with local artists and I used this name , but it didn’t work and now I use it for myself. A lot of people tell me it relates to me because I draw everyday and it was an accidental match so I kept using it. I wasn’t trying to call myself a “machine”, this name came naturally and related to my lifestyle of drawing constantly.

What’s the graffiti scene like in Brazil? What about your city? How is this kind of art considered by the government? In your opinion, what’s the relationship between the community and the graffiti art?

In Brazil, Graffiti is very strong. There are a lot of talented people, many original artists, original work with a lot of strength, there are a lot of dudes painting trains here. Brazil is huge, it’s continental sized. There are a lot of hidden talents in my city. Nowadays, there’s a lot of illegal stuff around. Before I was not used to seeing many names as I see now. To paint in the streets 15 years ago was easy to see…now it’s a fish tank with sharks; many street writers. It’s a new phase in our local Graffiti scene. We have more than 60 women painting and for me that’s admirable. Productions and murals, the way I like them, aren’t many but those who do it are amazing.

The government started a dialogue recently through the secretary of culture. There are forums and paid festivals for graffiti artists, but at the same time a lot of opportunists that have nothing to do with art to mess it up. In the end we can’t really rely on the government; at the same time they had this dialogue they raised the fine for Pixação to 100k reais (aprox. 25k euro and 100 months of the minimum income in Brazil). I work without any help from the government, never counted on it , but there’s a dialogue.

The dialogue from the art with the community is where I fit. I did drawing and educational workshops socially both in favelas and in jail, where my drawings had a bigger acceptance to be able to communicate with the people that come from the same place as I belong. I believe that each part will find its own place , we need to vandalize where it needs, destroy and bring art to where construction is needed, the poorer places, where I see that art performs its role perfectly. 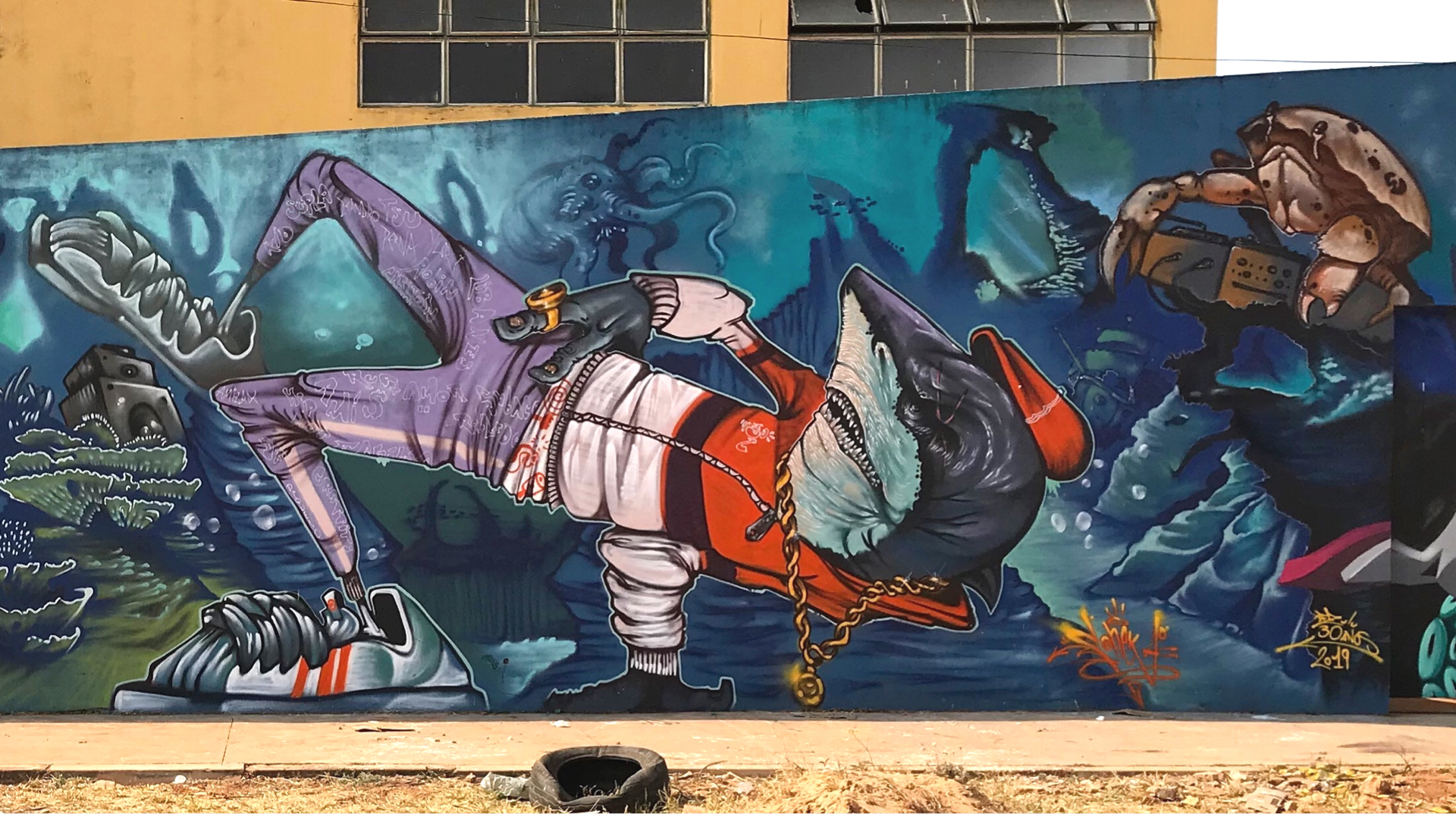 We can say that your style is characterized by fantastic puppets looking like caricatures and sometimes animalistic figures: where does this peculiarity come from? What do you get inspired by

This is because I can’t repeat myself and do the same thing over and over, I’m always bugged and thinking about making changes , because , to be honest , I see a lot of flaws in my work and I always want to change. My references are “Norman Rockwell” , “Vaughn Bode”, “Robert Crumb”, “Sergio Toppi”. I like to absorb this comic and illustrative universe and put my reality on it.

What would you like to express with your works? Is there any message behind your art?

I try to bring life, I believe this is my mission. Sometimes someone is having a bad day and I know it won’t save their lives or anything, but if he or she passes by a painting they can absorb a good energy from it. To me it’s just like music manifests a good or bad energy, so does a painting. We’re natural and spiritual beings and all we do will have a little bit of what we carry inside of us. Sometimes I’m the one having a bad day and painting cheers me up.

Tell us about your passion to realise tattoos: when did you move from walls to skin? What about that period ? How did you get into it?

Since I was a child I’ve been looking at tattoos and the skateboard culture is very close to tattoo’s and graffiti’s universe. I got my first tattoo when I was 18 and tattooed my friend at 22. To be honest I still try to separate one thing from the other, because the way I see is that they have different applications. I got lost trying to make the skin a wall , tattooing is long lasting and must be solid. It’s a beautiful art but it has limitations in order to last many years, and that took me a long time to understand. 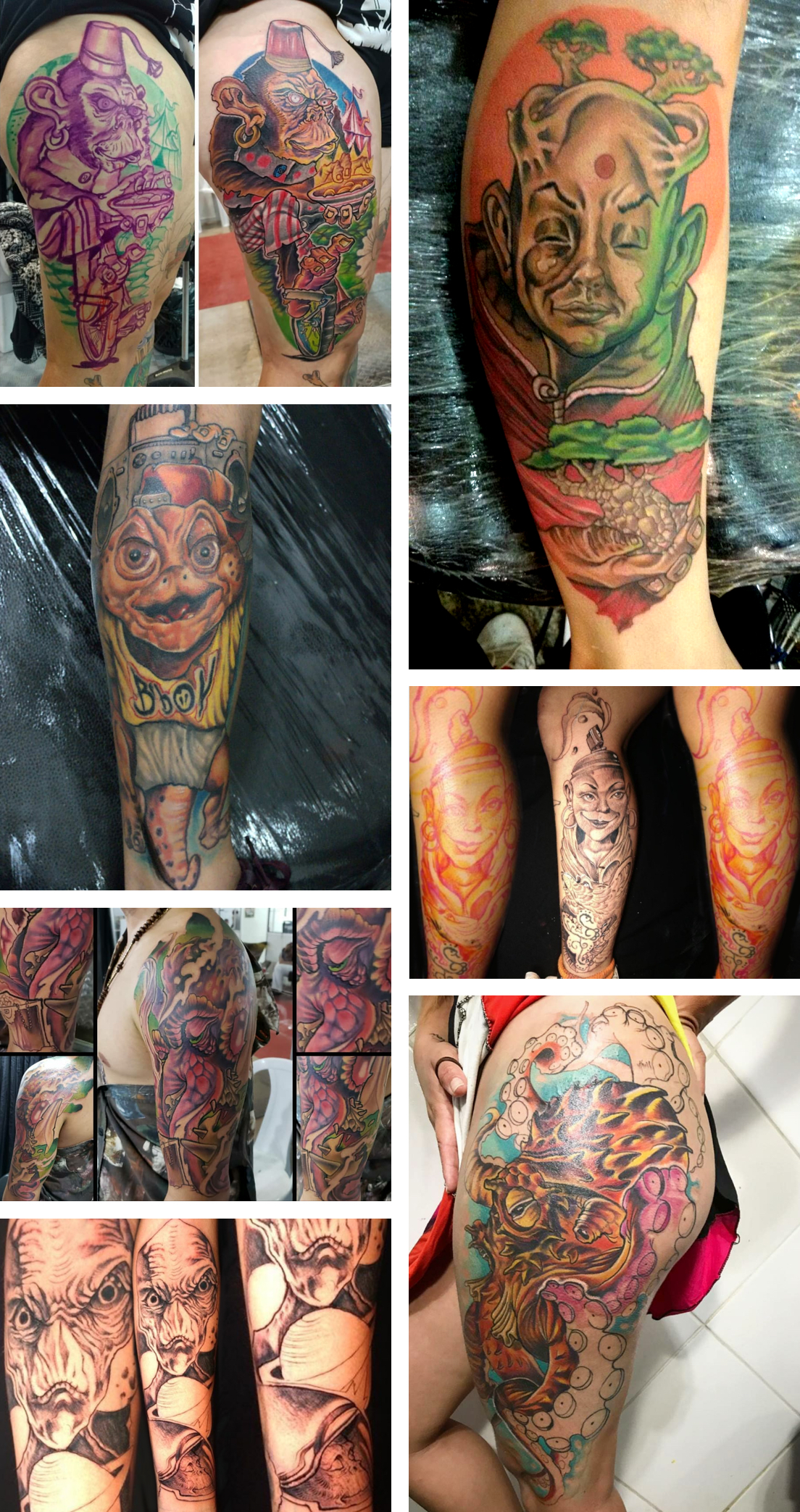 Did you manage to turn the passion for graffiti or tattoos into a job? How did you do it?

Tattooing is my job, is how I pay the bills, get dressed and feed my family. I dedicate myself so that my client comes out with the highest satisfaction possible. I really have a passion for that, from the time I start talking with the client to the moment I finish the tattoo, I just love it. Grafiti opened doors in many places but it didn’t give me a job, I’ve thought many times about giving up on one and sticking to the other, but I couldn’t. I get sick if I don’t paint. Everyday I struggle inside with these two passions.

Honestly my biggest dream is to have a book with my sketches, I have so many drawings stored! I’ve talked to a few book editors but nothing went through yet, I believe everything has its moment in life, and when will be the moment it may happen eventually… I think that a book can be important because they’re illustrations with pencil and paper, and that is to communicate that art can go to the palaces or the favelas, it’s in everyone’s reach, this is why my biggest ambition is to be able to reach all in the future, from those have less to those who have too much.

Do you reckon graffiti art or Hip Hop, in general, can contribute to the community also helping the young people to convey their energy into something positive?

Totally, this is where I came from, man! I was a gang member of a pixação crew, I saw many of my friends die murdered, graffiti took me out of it. I live and breathe that, graffiti gave me that as a gift, it gave me a name and everyone saw the power of graffiti in people’s lives. I know people that were born in the most violent places and graffiti made them the most talented people. I’m a witness of that!

Would you like to tell our people anything more about your life or your artistic journey that we didn’t mention before?

Man, there were moments where I didn’t have much in life and today what I have happened through art. When you’re going through certain bad situations, know that they’re not meant to bring you down but to make you stronger and wiser, they bring you maturity. I insist in making graffiti and the same way it saved me, it saves a lot of homies around the world. For me the biggest isn’t the one that paints the highest building but the one that doesn’t surrender and never stops, never gives up.

We are the resistance.
Faith in God

Thanks a lot man, looking forward to seeing you in Italy asap! 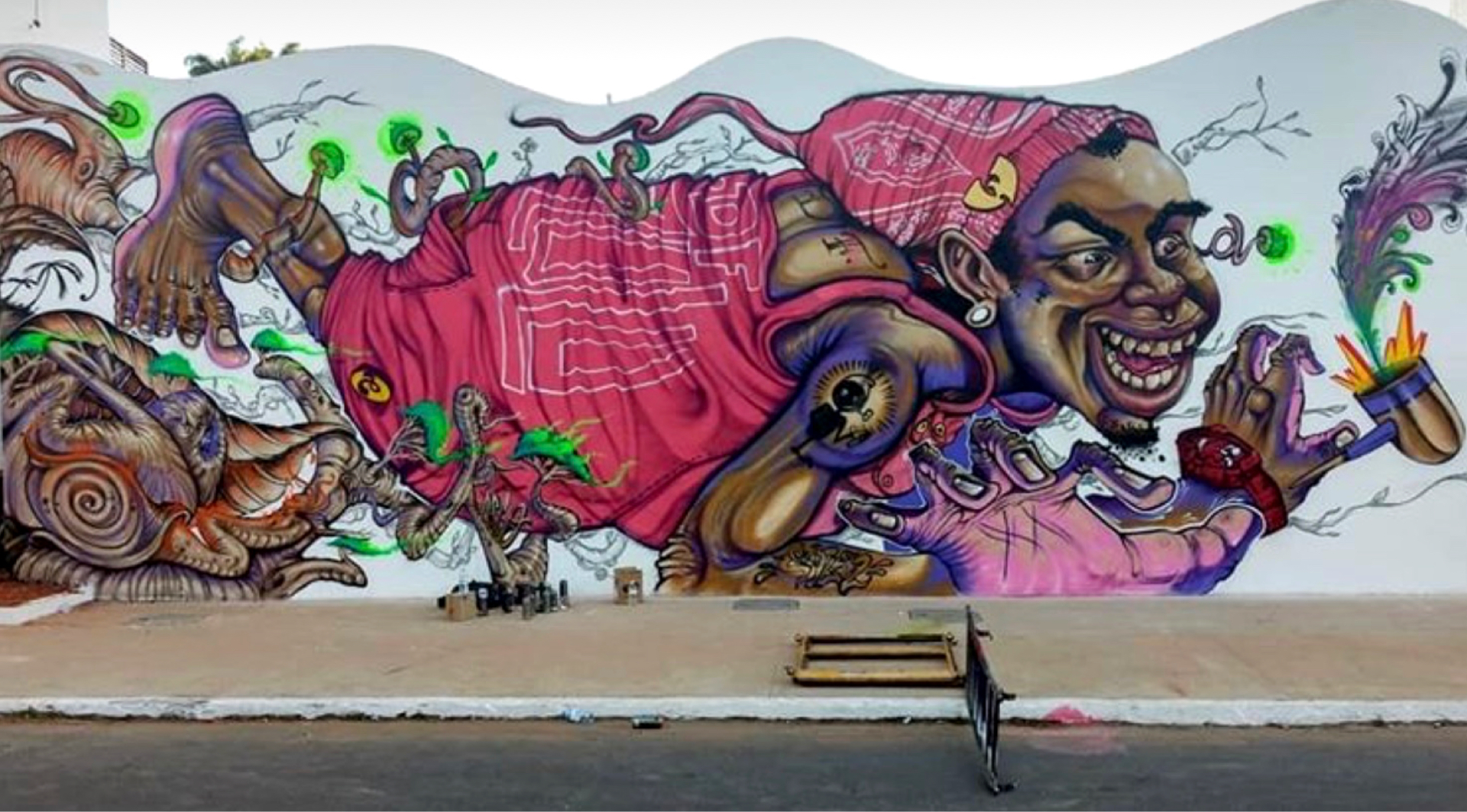