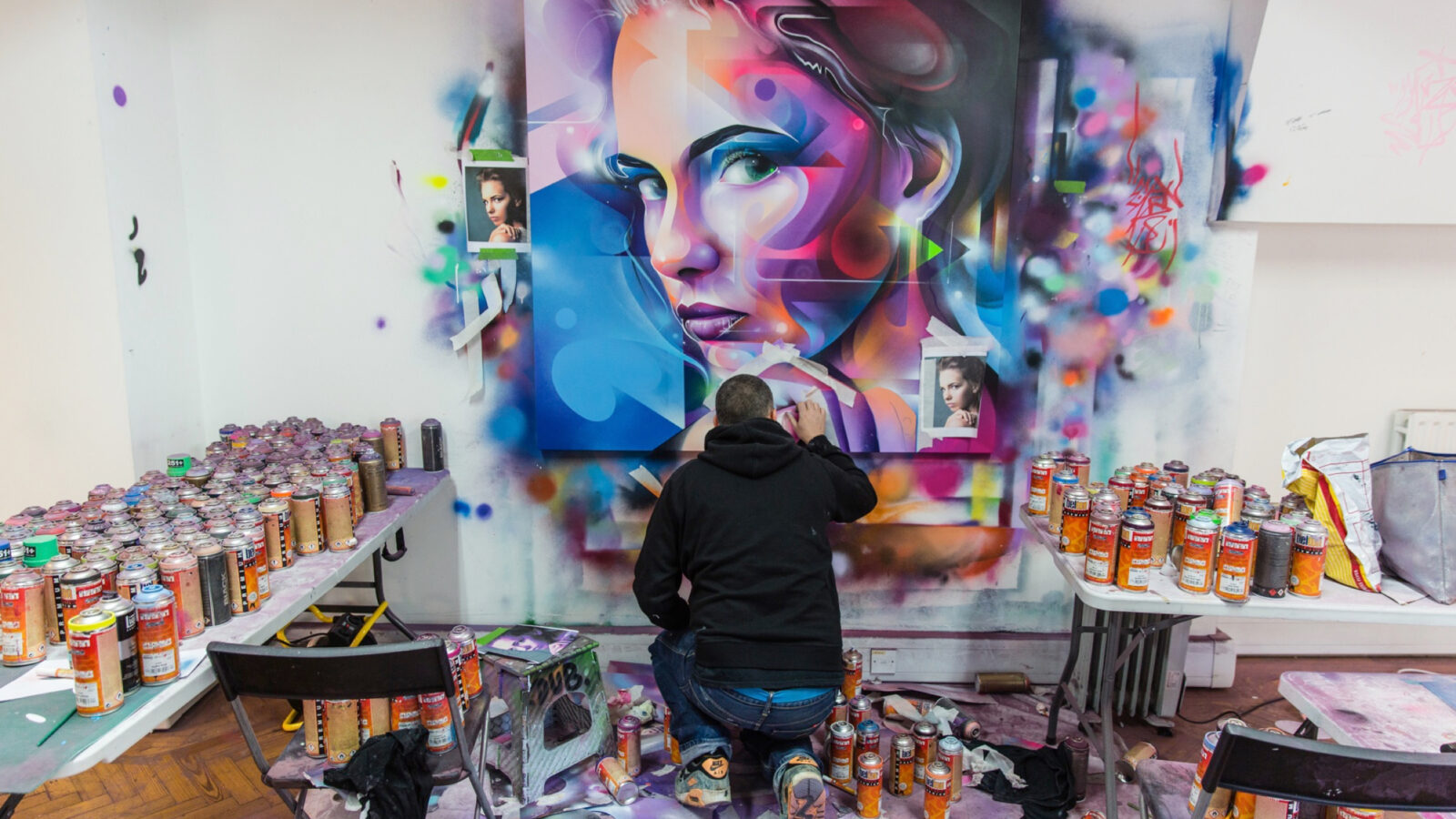 Hello MR.CENZ thanks for giving us the opportunity to ask you some questions, as we are fascinated by your splendid walls around London and other cities in the world. Today, you are a recognized and established artist, who has managed to transform his passion into a fulfilling job. Can you tell us about your beginnings in London? When and how did the transition from an “outlaw” graffiti writer to an established artist take place?

The transition was in the early 90’s after getting caught too many times and causing my parents too much grief. It was a fairly natural one though as I always loved other forms of art and wanted to learn more about them in college. It didn’t stop completely though and I always continued to carry a pen and catch tags wherever I could. I saw the potential in graffiti to be a job and an opportunity to do what I loved from an early age so this became more important than illegal activity. After many years of teaching vulnerable young people through graffiti workshops and developing my style at legal spots I eventually came to a crossroads where I found something special which I wanted to unleash. I had started experimenting with characters /portraits and combined this with my letterforms and old school flavours. Everything clicked and my style evolved and I began painting murals on the streets of London almost everyday. These were not all legal spots, but it’s easy to get away with not painting letters if you do it in the daytime with ladders etc and know how to blag the police with lines like ‘Its a community project’. 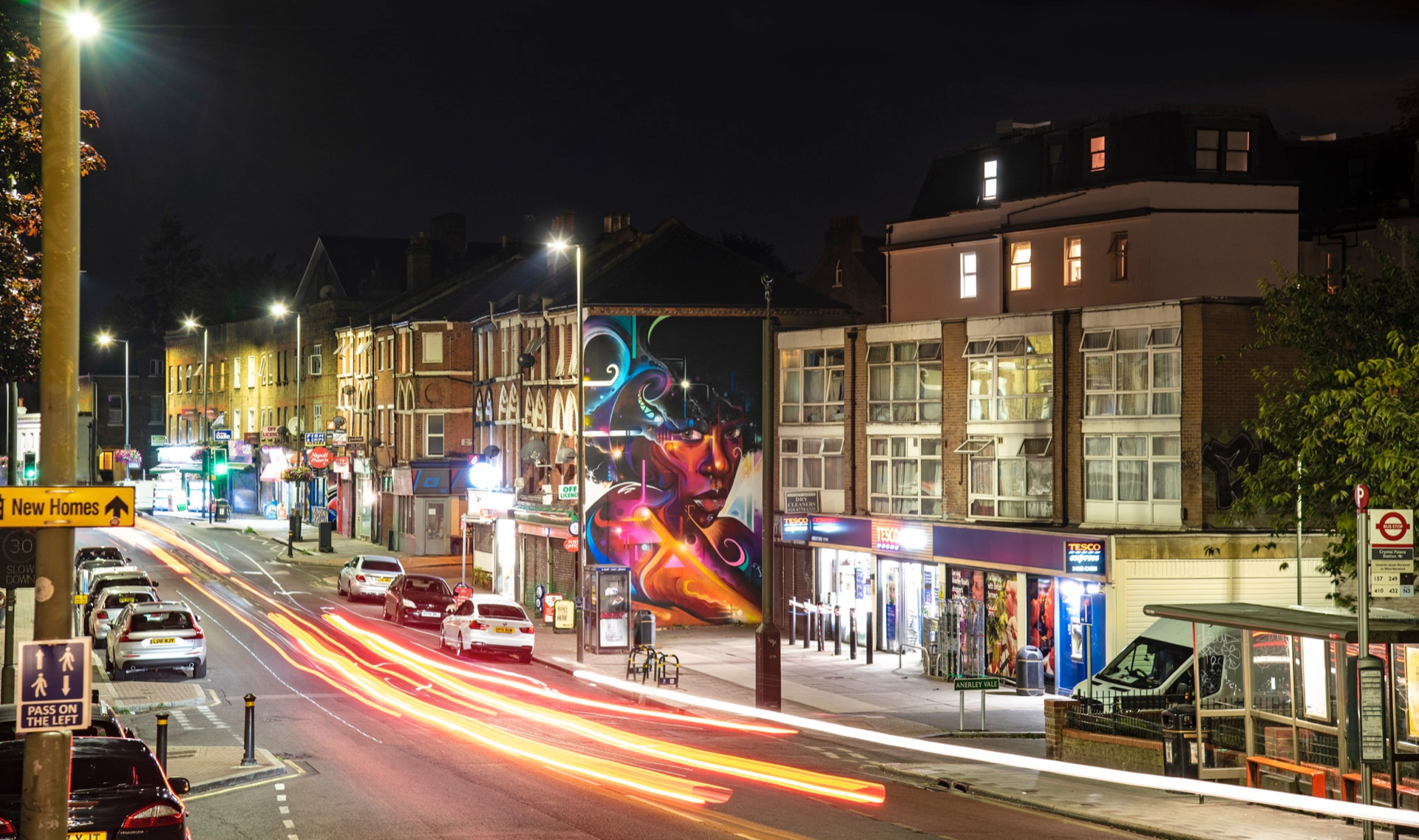 It’s well known that today, London is one of the most video-monitored and controlled cities in the world but despite this, in many areas of the city you can still see the walls of many graffiti writers … How has the graffiti phenomenon evolved in London? Can you briefly summarize to our readers the history of this movement in this metropolis and how did you experience it?

London as a major city was at the forefront of a wave of early graffiti coming from America. Before this hit we had punk and mod graffiti but this had no real style and creativity. So when the hip hop movement and the book Subway Art hit it inspired a whole generation of young kids and London and the whole UK exploded with graffiti. As I lived near central London I was lucky enough to see legends like the Chrome angles and London Giants create full colour pieces and productions in the flesh. This experience gave me the passion to start my own journey and I had lots of parks, abandoned buildings and subways to practice near where I lived. Back then everyone had a tag and going out bombing was a big social event. It was crazy what we got away with but so much fun too. 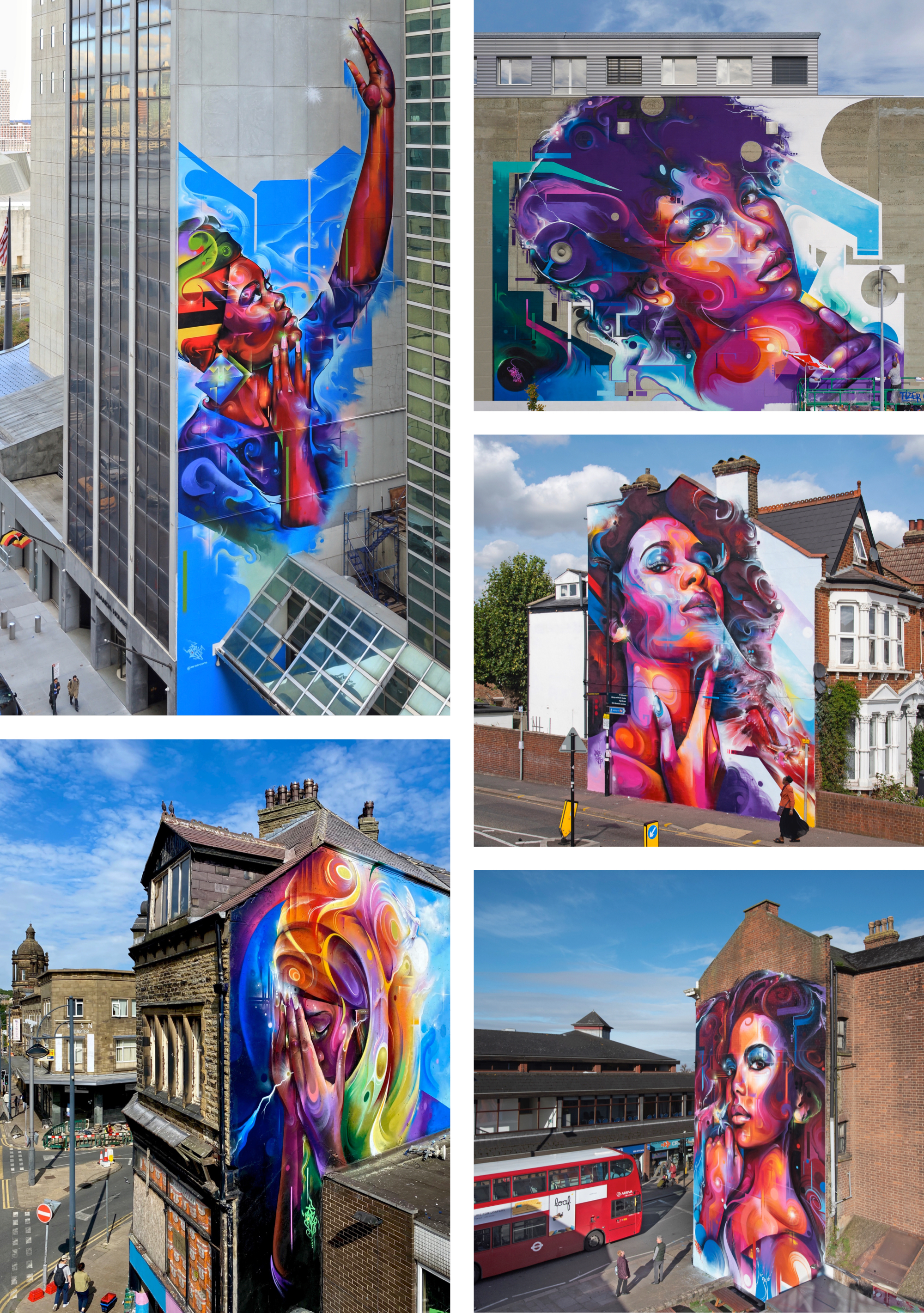 Please tell us where the name Mr. Cenz One comes from and if you have had any other monikers in the past. Which crew did you belong to?

I was writing ‘CENCE’ back in the late 80’s and was a founding member of the ‘Assasinz’ crew from South East London. There were about 100 writers in this crew and we were hitting buses and trains like crazy. It was all about hand styles back then, this was a real art and the reason I chose my name was just a love for the letters and flow of them. Over the years I added the ‘Z’ to make ‘CENZ ‘ and eventually when I went fully legit I added the ‘MR’. Since then I have been so lucky to travel the world and meet and paint with my heroes and feel blessed to now be part of the infamous ‘FX’ crew from New York.

The recurring subjects of your walls today are beautiful women: where did the choice of these subjects come from and what inspired you?

From the early days I have always loved characters especially the B-girl ones so I wanted to explore this more and mix with more realistic fine art portraits. I was finding that painting letters was restricting my creativity and wanted to break the cycle, explore more and push myself technically. Once I started I became fascinated by the female faces and shapes in the cheeks etc. 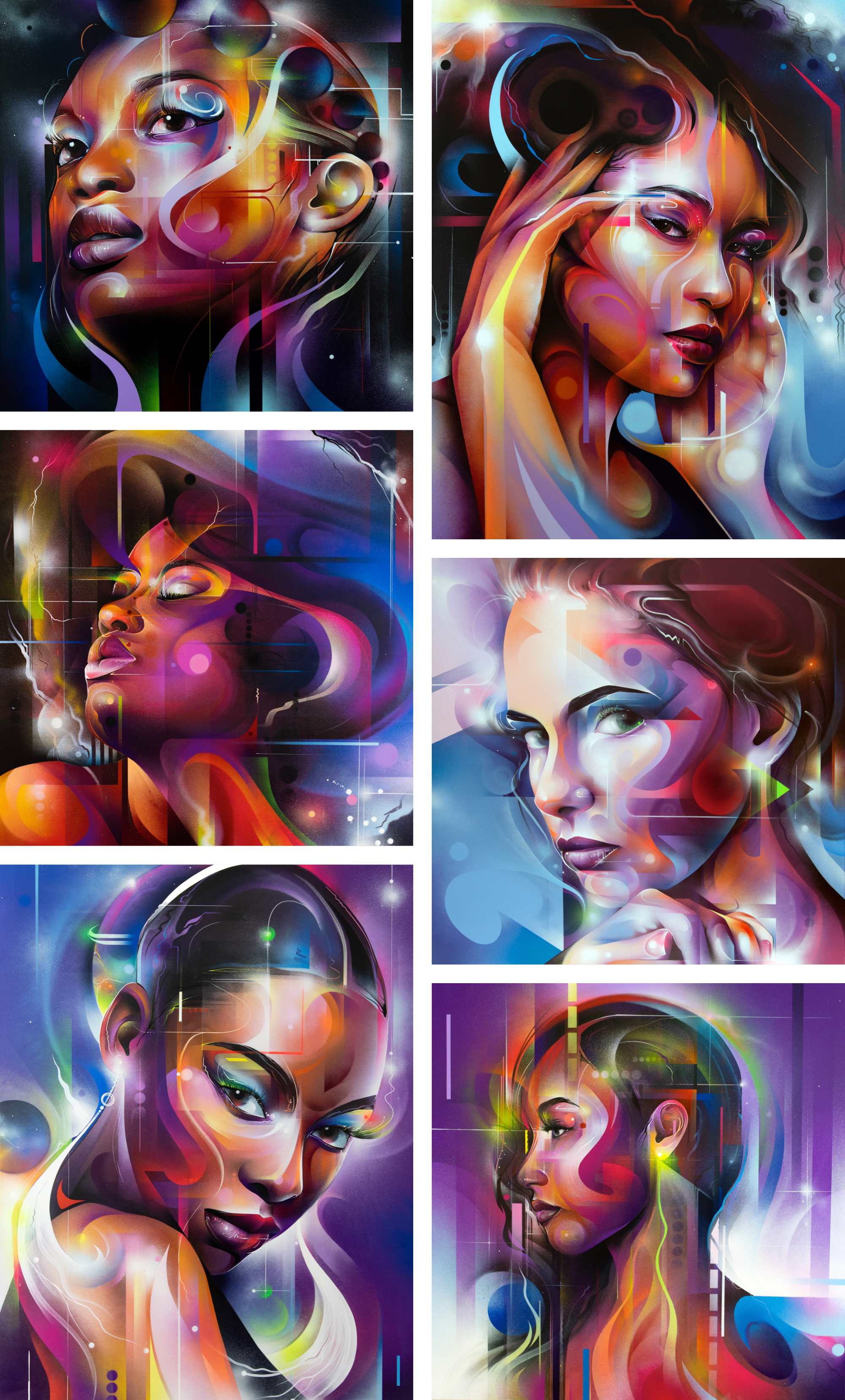 How would you define your style and which other techniques and supports do you love to use? Which are the arts and works you are most attached to?

I would describe my style as cosmic, drug-fuelled, futuristic space funk from the soul. I now use all the techniques that I have learned over the years in one big melting pot. Those early days painting pieces every week have helped me to have many skills at my disposal and this combination of them in my work is what makes it so unique and difficult to copy. I have an attachment to certain murals and paintings but I try not to think about it too much as looking back at what you have done is not good for your motivation. I’m always thinking about the next wall and trying to progress and focus on advancing my style.

Do you still write and work with letters?

Yes of course but unfortunately I don’t get the chance to just go and paint with my friends as Im so busy working on projects and big walls. I really want to start painting more pieces again and will soon for sure and this urge never leaves you. I am always sketching outlines and working with letterforms in my murals so I always feel attached to my roots. 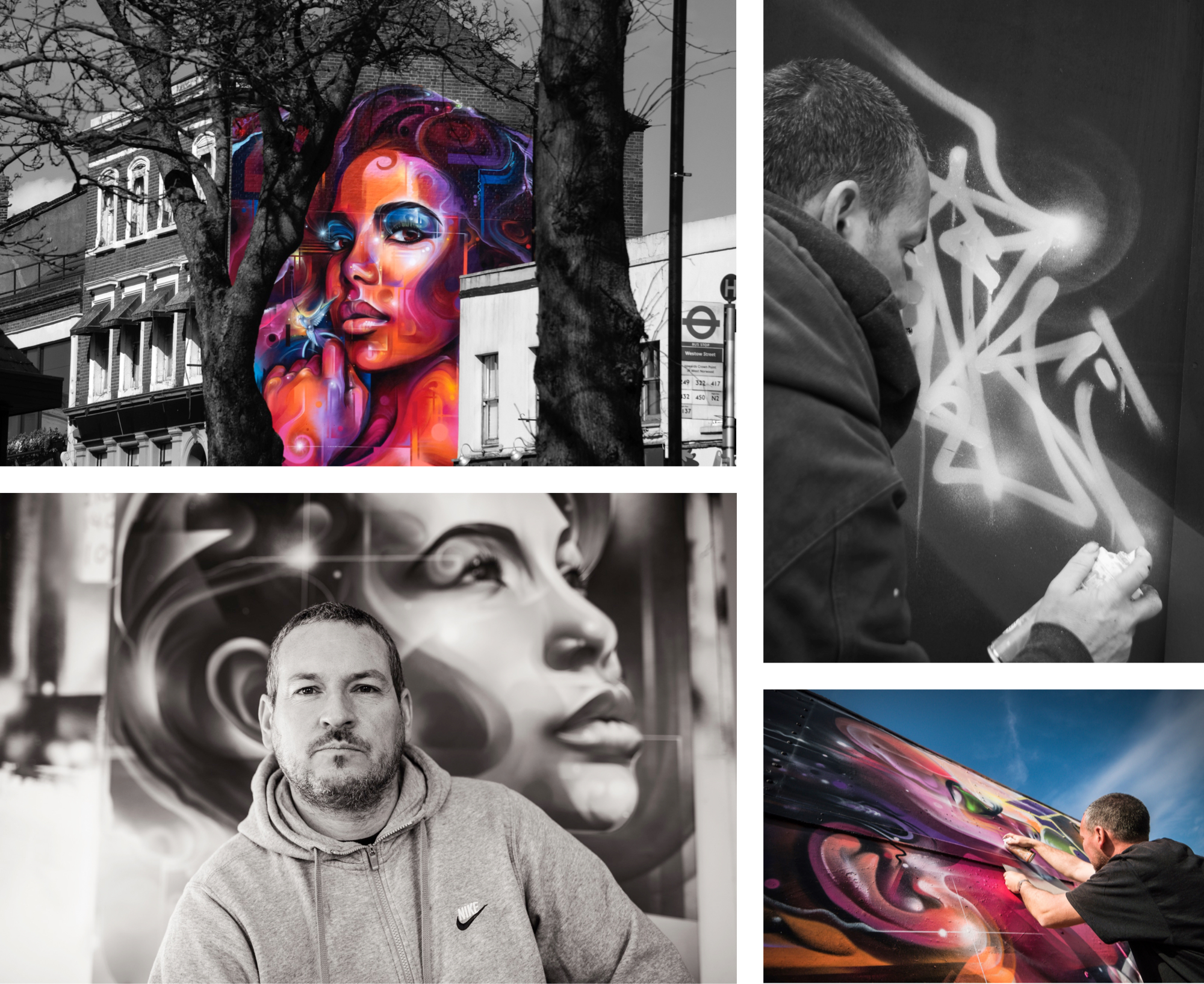 Who are the artists that inspired you the most over the years? And in your opinion, which one do you feel more similar artistically or temperamentally?

I always hate this question as I like lots of people’s work. I have an affinity with anyone trying to push graffiti art into the future and doing different things. For me style and form is key so I’ve people who push the graffiti ethos into other realms like Kwest, Remi Rough, Sen 2 and Does etc. Early influences are of course the New York writers like Skeme, Dondi etc but also the London legends like Goldie, Mode 2, Snatch etc

The dream of many is to be able to transform their passion into a job: what advice would you give to those who want to achieve this ambition? Which are the prerequisites and indispensable steps to make?

It’s much easier these days as through graffiti/street art you have many opportunities to earn a living, but you still have to work hard. The work ethic is the most important thing, there is no shortcut to gaining recognition and respect. Spend time developing your style and identity as an artist and then try to keep your integrity and not be won over by the easy route of money and commercial success. Be patient and paint what you want with passion and good things will come.

Once, the disciplines of the Hip-Hop phenomenon were much more connected: how do you interact with the other aspects of this culture? How do you still feel connected to it? Who are the MC’s do you listen to most frequently?

The other element of the culture which I got obsessed with from an early age was DJ-ing. I was collecting records from 9 years old and still do today. I play out still and love the art of mixing. Music is very important to me and reflective in my work. I listen to all kinds of music but mainly early funk, soul, breaks hip hop and new and old electro. My favourite MC’s are all from the golden age like Mc Shan, Biz markie, EPMD and Rakim. 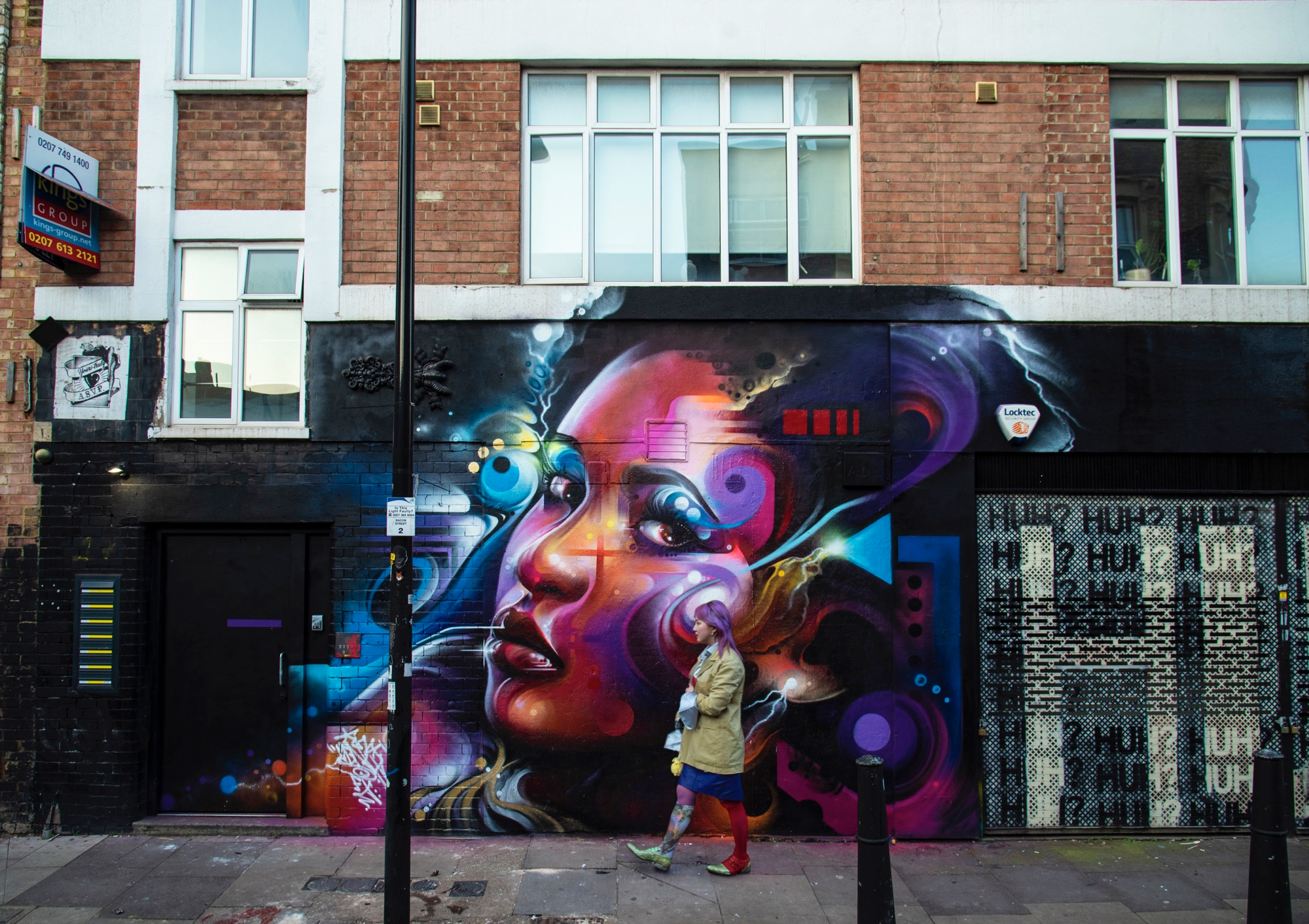