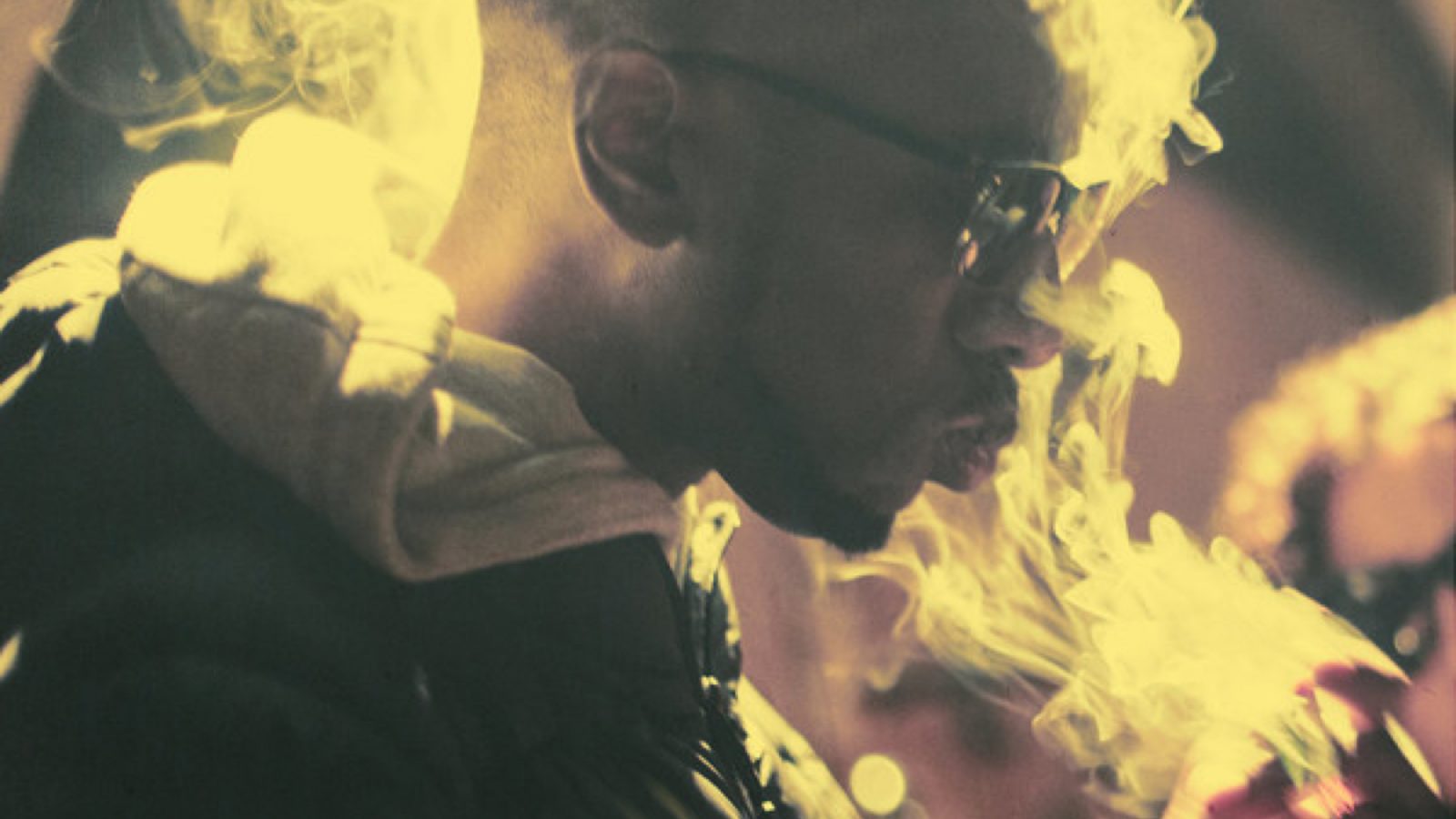 Peace! Thank you Ray for letting us ask you a few questions! Can you please tell us which part of London you come from and how did you initially come into contact with Hip Hop culture?

RAY VENDETTA: “Born and raised in the Haringey and Enfield boroughs of North London. Hip-hop culture has been around me for as long as I can remember. My father and uncles played a lot of late 80s to early 90s Hip Hop, so I was always familiar with the sound. As a kid, Rap content fascinated me for obvious reasons,even though most of the lyrics flew right over my head in regards to understanding what was truly being said.”

You started your career as a member of Triple Darkness, correct? Can you tell us something about the history of this collective and how you became part of it? What was its importance among the UK underground scene?

RAY VENDETTA: “Triple Darkness was founded in the early 2000s by Cyrus Malachi, M9 and Nasheron aka Crown Nectar. Cyrus and Nasheron were previously the Hearesy.  I became a member of the expanded roster around 2012/2013 after Cyrus Malachi and M9 who were scouting for mcs to add to the expansion, were put onto some of my earlier works by producer Endemic, who was impressed by a few of my 1st tracks/videos on Youtube.

Triple Darkness are considered the UK’s Wu tang by many. This is a title the scene constantly gave us, once Cyrus and M9 expanded beyond the core 3 members. Triple Darkness started off as back when they released their debut Lp “Anathema“, a classic and critically acclaimed Lp that started the Wu comparisons off and rightly so…

Where did your name Ray Vendetta come from?

RAY VENDETTA: “My first rapper names were Rapping Ray then YUNG Scavenger, but this was before I began to take rap seriously. Once I did, I gave myself the name VENDETTA. This was in my mid teens, while studying la costra nostra and all things Mafia related.

I liked the term “vendetta” and that it signified vengeance, retaliation and get back (my young mind at work lol). My long time brother Bad Company suggested that I add RAY to the title in my latter teens. I liked this idea so I’ve ran with it ever since.

My other alias are Ray of Light, Rayzah Sharp, Master Chambers and Daddylongluv”.

At the end of April you released “Son Of Floyd”. Can you tell us about the concept , the title and the realization process of this album?

RAY VENDETTA: “SON OF FLOYD is part one of a series of projects I’ve titled “The Legacy Agenda“. These projects are dedicated to my family. I figured it would be fitting to start with my father so chose this body of work as the jump off”.

The project itself was initially an Ep with “MARKIE4EYEZ“( Illternal beats), but was expanded to an LP once ‘Baron Synback aka Mr. Synback ” (Ill Breed Collective) caught wind of what was being crafted and wanted to contribute. As Markie and BARON are both members of the IBC (Ill Breed Collective) it made perfect sense to merge the sonics and this worked to great effect as their both familiar with each others respective sounds.”

Can you tell us about your last album you released in June? What are the main differences with your previous album? Did you retrace the sound of your latest projects or, in your opinion, did you have something special in store both in terms of production and writing?

RAY VENDETTA: “My new project is titled “GIVE MY BABIES MY ENTIRE EARNINGS ” (GMBMEE). I used an acronym to make it easier to say as it’s a long title. Title is a dedication to my children and an ode to the last lyric Ghostface Killah spits on Bulletproof wallets LP. A line that always stuck in my head (before I even had kids of my own).

It’s entirely produced by Wu Killarmy affiliated Falling Down and our third project together”. Previous 2 were “THIS THING OF OURS“, an Odd Couple release with my bro Teslas Ghost and “NRFTG” (NO REST FOR THE GIFTED)”.

“With this project I wanted to further sharpen my lyrical swords, highlight my sustained growth as MC and display my love for my kids. The project doesn’t centre around them as a focal point, but they narrate it from start to finish, so cohesiveness is kept throughout. The project is heavily soul influenced, whereas SON OF FLOYD was more of an eclectic mixture of sample sources”.

Your catalog is really deep: in your opinion what are your three most important projects, in order? And why?

RAY VENDETTA: “I have so many projects out in the world! (20+). This question is always hard to answer, but if i was to list 3 as far as importance goes the 3 chosen would be “GUESS WHO’S COMING TO DINNER“, “DARKER THAN BLACK” and “SINS OF THE SON“.

Notable mention outside of this would be “7 SWORDZ OV LIGHT ” (2013), my Triple Darkness debut and COLD FUSION (Myself & Cyrus Malachi), “THE ELIXIR” (2015) both produced by the late great 7th Dan(RIP) who passed away in 2016. These are all projects that hold a special meaning to me”.

Your style is different from the current wave of the “UK drill” sound or the classic grime that has always characterized the United Kingdom Rap music, so much so that in some cases it seems to be in Brooklyn listening to your music! Can you explain what or who pushed you to stay loyal to a “classic” and underground Hip-Hop sound?

RAY VENDETTA: “My sound/style is a direct reflection of my Hip-hop influences coming up. I was engulfed in Hip-hop heavily from late ‘96 onwards, and picked up the pen around the same time, so I feel this is the most accurate way to describe my style. An influence of my favourite US hip-hop act at the time, mainly the Wu,Mobb Deep, MOP, Beatnuts, Nas, Big, 2pac, Big pun, Snoop, Dre, Outkast, Slum Village and many more.

As well as a handful of UK mcs ( Ric.B, Jehst, Cappo, Roots Manuva and a few more) that inspired me once I began to grow more confident with my pen skills”.

The era of hip-hop I grew up through basically embedded itself into me so deeply, that there really isn’t any other way I’d see myself portraying my art, asides staying true to self 1st and to the art and culture secondly…

In fact, it is no coincidence that you have collaborated with some of the strongest North American underground MCs including Conway The Machine, Recognize Ali, God Fahim and others … How was this trans-oceanic underground connection, that also involves other MCs and British underground producers, born?

RAY VENDETTA: “My appearance on track with Conway was via my long time bro and right hand man “Tesla’s Ghost”, who recruited Conway’s services for his debut album “Stretch Lincolns”. A look out that I was extremely grateful for and immensely proud of.

Collabs with Tha God Fahim and Daniel Son were mutual connections. We all have projects out with producer Giallo Point, so I reached out, they were both kool individuals and we organically made sh*it happens. All other US – Canada collabs were forged off the strength of mutual admiration of previous works and just reaching out across social media”.

“With the UK producers it was more circles connecting to circles. Only time this hasn’t been the case was back when I crafted “TDA4″ Mixtape between 2014-18 ( released 2019) as I reached out to new producers and those I wouldn’t have usually worked with for this double disk offering. Aim of this was to expose lesser known producers that were dope and give myself a new challenge as far as selecting beats goes…”

How do you see this UK drill scene currently? Do you think it will work for a long time or do you feel a need towards the return of the more classic rap? Do you think, on the other hand, that there is room for a rebirth of the underground also in the UK market as in the US?

I feel the UK drill scene is necessary amongst current music as it has become the voice of the London and Uk youth.

Many of whom are angry, lost, disgruntled and lost in a system designed for their inevitable failure. The sub genre itself faces regular criticism (fair and unfair) due to its content, but I like certain sonic aspects of it and feel that it will evolve in time just as GRIME did before it emerged.

“This will lead to sustained longevity and its MCs being taken seriously as credible artists.

The mainstream has now embraced it, so I’m hoping that these young guys and girls capitalize and expand their artistry beyond the run of the mill cliche bars and content in order to evolve the genre as the grime artists did before them. Time will tell…

As for the UK hip-hop underground scene I don’t see it reaching its deserved heights, just yet as there are too many washed up gatekeepers that have actively held it back for at least 2 decades now! Their downfall was the internet and the fact that many can now forge their own lanes without label dependency or being connected to a specific click/crew/group”.

“Highfocus records and Blah are probably the scenes strongest 2 as far as reach goes, but they only cater to a specific demographic of fans, so have mastered their lanes and run with them successfully.

40/50 more labels running in a similar format will allow the scene to get the levels it deserves to be at! Meaning still pure to the core artistically, but with an increased mainstream spotlight. I feel this is the only way the scene will see the type of resurgence, that we’ve seen for underground Hip-hop across the waters in the past decade.

People also quickly forget that the UK is very small in comparison to the States. This is another prime factor,sales growth,prosperity,demographic etc…”

How does your creative process go? Do you only write on the instrumental at specific times or do you throw on paper what goes through your head during the day?

RAY VENDETTA:  “My creative process varies, but I usually like to pick a selection of beats and sit with them for a few days figuring out concepts and the direction I want to go in. Once this is decided, I get to penning up tracks. I don’t start songs and get back to them. I like to start a song and finish it in one sitting and I usually write batches of them at once. So in one sitting I might pen up 4 or 5 joints”.

“For example I penned “5000 KELVIN” Ep (produced by Mook of Sons Phonetic) in a day after being inspired by a documentary on the sun. Whereas “Son of FLOYD” was crafted over the course of months on and off. Process can vary depending on the size of projects and who i’m working with at the time”.

If we are not wrong, you are also an illustrator. Can you tell us  something about your passion? And do you have any connection with the local graffiti scene?

RAY VENDETTA: “Couldn’t say I was ever involved in the graf scene, asides permanent Marker pen graffing trains, busses and estate tower blocks during my teens, but I’ve always admired the skill involved in spraying (throwing up) as well as the end product. (shoutouts to Theme and all my graffiti bredrins).

I’ve illustrated since my childhood but only began to incorporate my art into my music over recent years. I’m currently in the process of some really exciting and groundbreaking art/music crossover ventures that will surprise my fan base over the coming months. Won’t say much more than keep an eye out…”